Share
Grado, a seaside village in the province of Gorizia, stretches between the homonymous lagoon, the mouth of the Isonzo and the Adriatic Sea. The Grado lagoon includes about 30 islands and two nature reserves, which preserve their biodiversity. In addition to the main island, the island of Schiusa is permanently inhabited, connected to Grado with two bridges, and the island of Barbana.

A look at Grado

Grado, a seaside village in the province of Gor...
Vincenzo Scamarcio - e-borghi Community 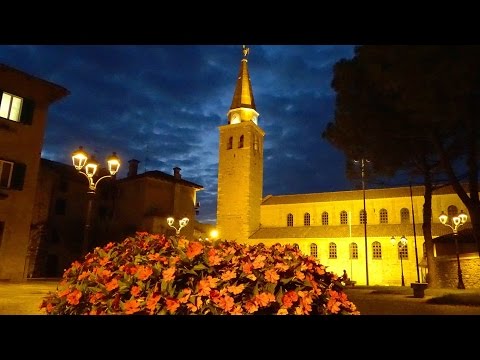 the seaside village of (Gravo in Grado dialect, Grau in Friulian) and its splendid lagoon boast over 1600 years of history, still visible along the streets of the ancient roman castrum, where they reside the Paleochristian Basilica of Sant Eufemia and the Basilica of Santa Maria della Grazie. Its territory extends between the homonymous lagoon, the mouth of Isonzo and the Adriatic Sea. The town is located on the largest island and is divided into several areas and districts: Grado Vecia (the ancient city enclosed by the perimeter of the roman castrum), Borgo de Fora, Island of schiusa, Colmata, Center, Squero, Garden City, Goppion Valley - former Cavarera Valley, Grado pinewood, Primero.

In Roman times the city, known as to Aquae Gradatae, was the harbor at the service of Aquileia and the Castrum, the first for vessels from there came into the Natisone River. Grado developed around 452, when many inhabitants took refuge on the island to escape the hordes of the Huns led by Attila the Hun. The emergence of Venice as dominant center of Venetian lagoons marked but the slow decline of the island, which was aggravated by the reconstruction of the city of Aquileia (on horseback between IX and X century) and from a ruinous looting suffered in the twenties of the XI century. Grado then became a poor fishermen village and it remained in the subsequent centuries, belonging to the Dogado, the narrow tongue of land that stretched from the delta of the Po to Grado and since almost at Monfalcone: a set of lagoons, sandbanks, canals and waterways directly administered by the City of Venice and that ensured the Serenissima the direct control of a good part of the coast high-Adriatic, but without almost penetrate in the mainland. With the Treaty of Campoformio (1797) and the end of the millennial Venetian Republic, Grado became part of the domains of the house of Austria that, with the exception of the brief Napoleonic period, it retained ownership until 1918. In 1936 degree was connected to the mainland by a bridge which put an end to centuries of isolation of the island. Rapid urban expansion, accompanied by works of reclamation and containment of water, therefore has greatly expanded the dimensions of the inhabited area, which now also extends to the nearby island of Schiusa.

Enchanting scenery of unquestionable beauty and extraordinary natural wealth, the Grado lagoon extends over 90 square kilometers and comprises about 30 islands and two natural reserves, which preserve biodiversity. In addition to the greater island, are inhabited stably even the island of hatching, connected to a degree with two bridges, and to the island of Barbana.

The sea is calm and clean, the shallow water down sweetly, numerous beaches of fine sand and the immersive entertainment activities for children and adults, as well as the good kitchen, comfortable refreshment venues and the numerous facilities, make this resort very safe and protected. This attention that always able reserves for its guests causes from 27 consecutive years the location is awarded the Blue Flag for its environmental quality, a guarantee for the properties of water and services. It is an important tourist center and spa, also known as the Island of the sun and, for its particular history, First Venice.

Village of Grado
Municipality of Grado

Cavanata Valley Natural Reserve
The Cavanata Valley Natural Reserve, located in the portion most oriental of the Grado lagoon, is...
Via Grado, 1, Fossalon di Grado, Grado
Isonzo Mouth Natural Reserve
Marshes of sweet water, but also the vast wetlands salted, thickets, woods and grasslands: this i...
Sentiero ad anello, Grado
Sanctuary of Barbana Island
The Sanctuary is located on the island of Barbana, in the Grado lagoon.
Isola di Barbana, Grado
Grado Archaeological Area
the archaeological area of Grado is located in the historic center of the village, in Friuli Vene...
Piazza Biagio Marin, 4, Grado
Basilica of Sant'Eufemia
Basilica of Santa Eufemia is situated in the old town of Grado.
Campo Patriarca Elia, Grado
Basilica of Santa Maria delle Grazie
The Basilica of Santa Maria delle Grazie overlooks Campo of Patriarchs near the Basilica of Sant'...
Campo Patriarca Elia, Grado
Antonio the Dinosaur
at the former limestone quarry located between Duino and the village of fisherman was found the s...

Centro Civico, Via Sinodo, 28, Marano Lagunare (Udine)
19.64 Kilometers from Grado
Devin Castle
The Devin Castle is situated in the village of Duino, in Friuli Venezia Giulia.

Frazione Duino, 32, Duino-Aurisina (Trieste)
19.67 Kilometers from Grado
Duino Cliffs Natural Reserve
The Reserve extends along a strip of territory rich of tracks that bear witness to the transition...

Via delle Valli, 2, Marano Lagunare (Udine)
19.81 Kilometers from Grado
Mithraeum's Cave
The Mithraeum of Devin, in Friuli Venezia Giulia, is a natural cavity where it is practiced the c...

Grado is present in issue 8 of our digital magazine e-borghi travel.
Read it now!

Friuli-Venezia Giulia, a thousand border tastes
In Friuli-Venezia Giulia, on the very North-East of Italy, the middle European, the Venetian and the Slavic cultures come together. Like the art and the traditions, the tastes from this area are a combination of different cultures that produce many unique products and recipes that are influenced by the landscapes, the environment and the climate. There are some typical products that have been awarded with the DOP (protected Designation of Orig...
Continue
Discovering the natural reserves of the villages of Friuli Venezia Giulia
Concurrent with the release of the June 2018 issue of Borghi magazine, here is a gift for all nature lovers. In the family, in pairs or for solitary adventurous, we will deepen the discovery of the water lands and the natural reserves of Friuli Venezia Giulia. Excursions on foot, by boat or by bike, and then unmissable events, birdwatching, unique landscapes and a brand new interactive app for your holidays in contact with nature! L...
Continue
Recipe: the Boreto a la Graisana of the village of Grado
The Boreto a la Graisana is one of the most characteristic dishes of the village of Grado, in the province of Gorizia, Italy. With an ancient history and the easy preparation, this particular fish broth has an unmistakable taste that encloses the history of the whole city and its love for the sea. This dish, poor in the tradition of fishermen, who used the unsold fish to prepare it, is not really a real soup or a broth as it is known in other parts of Italy, but almost a thick sauce that does not need of any ga...
Continue
Recipe: Jota, the tasty minestrone of the Friulian villages
In the past, the jota was based on essential and protein ingredients: sauerkraut, beans and cornmeal. The only concession to the throat was given by the pestat, a mixture of lard and aromatic herbs. Nowadays this typical cuisine cooked in the villages of Friuli-Venezia Giulia - also present on the tables of the provincial capitals - is served all year round and, depending on the climate, hot, cold or lukewarm, usually accompanied by wine glasses of the Carso that enhance its flavor. The jota also represents the pleasure of meeting and lig...
Continue