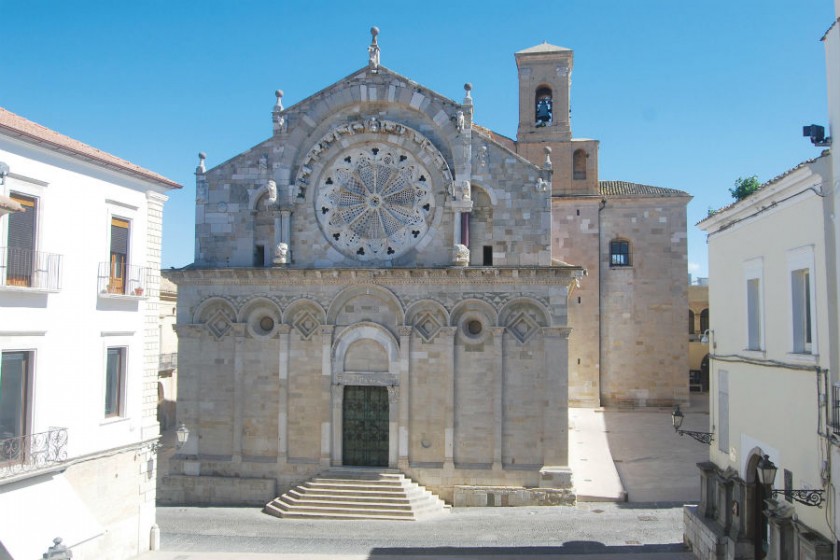 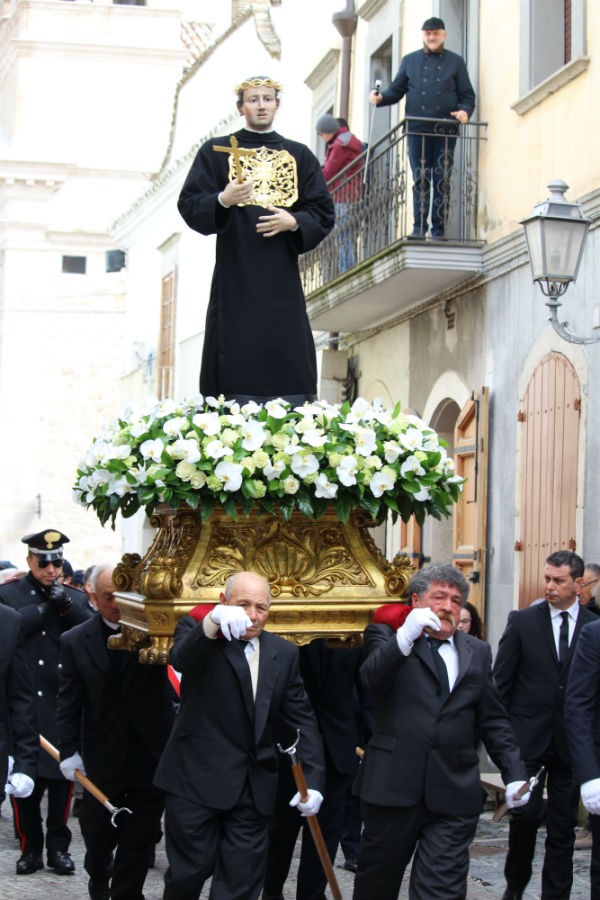 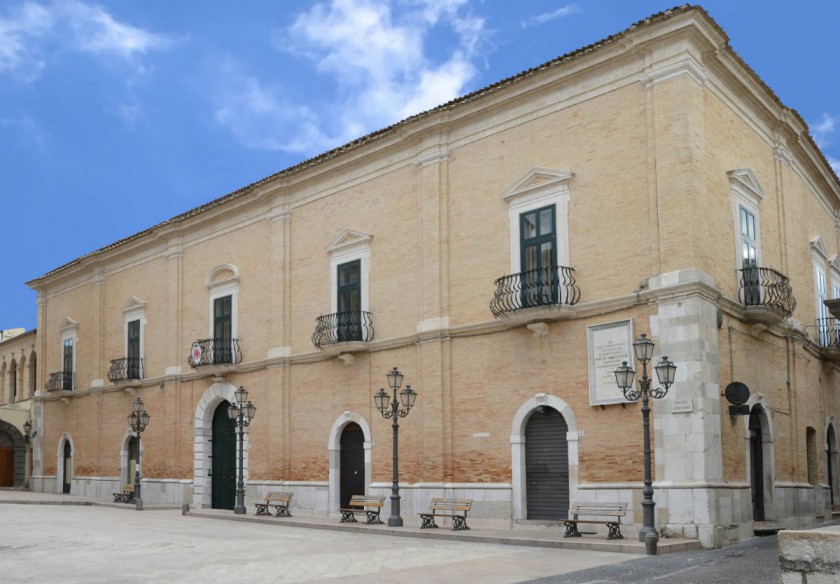 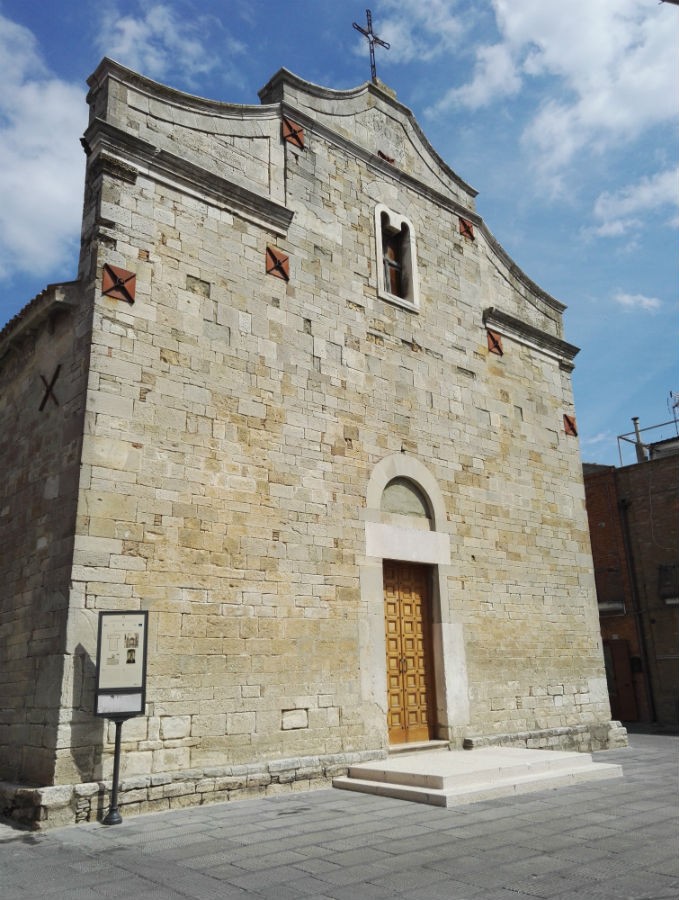 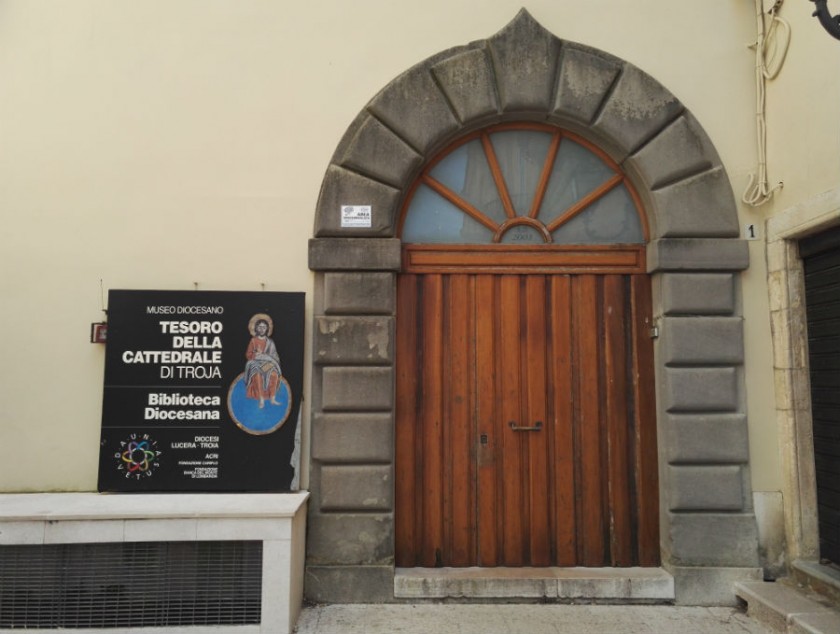 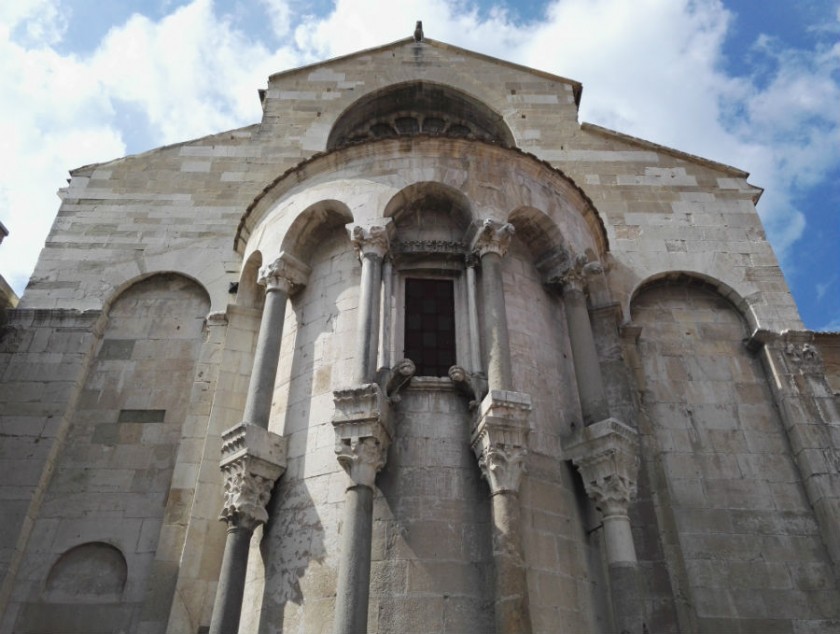 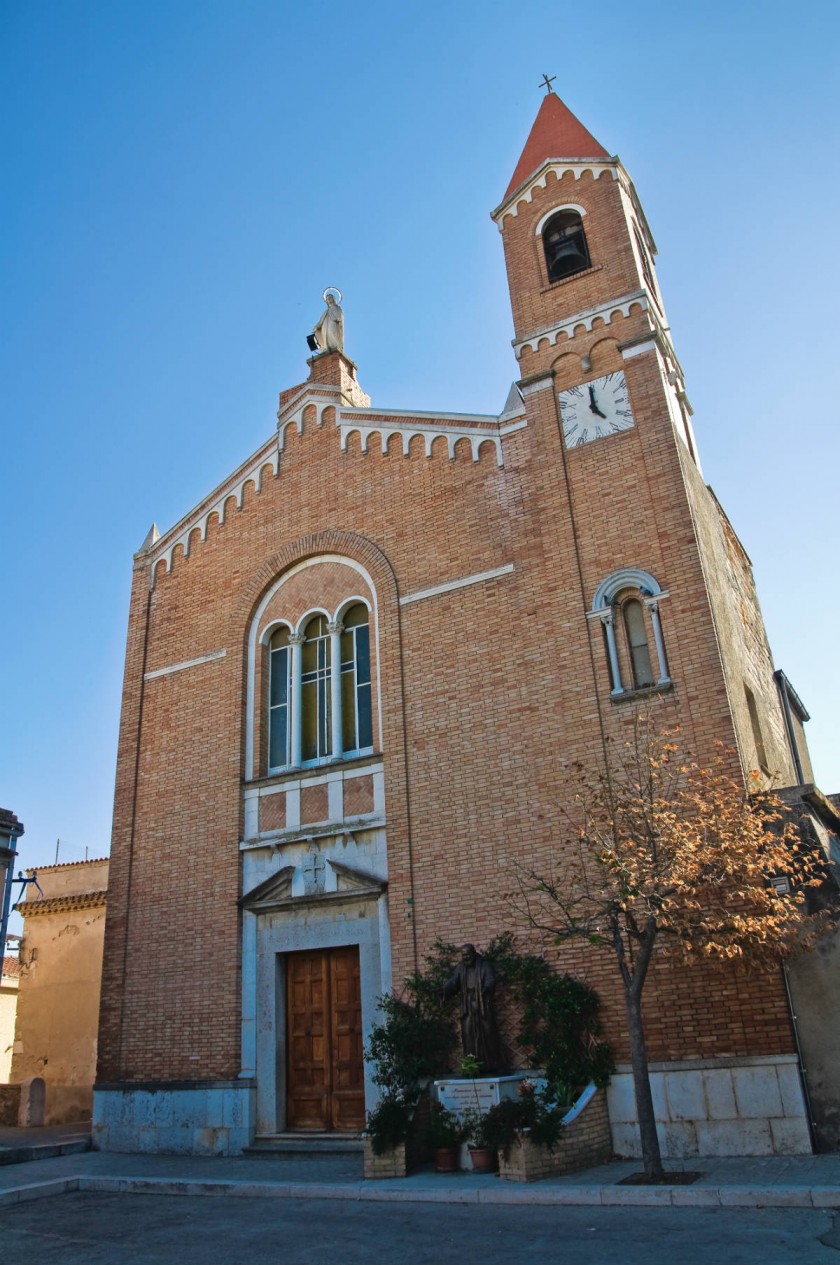 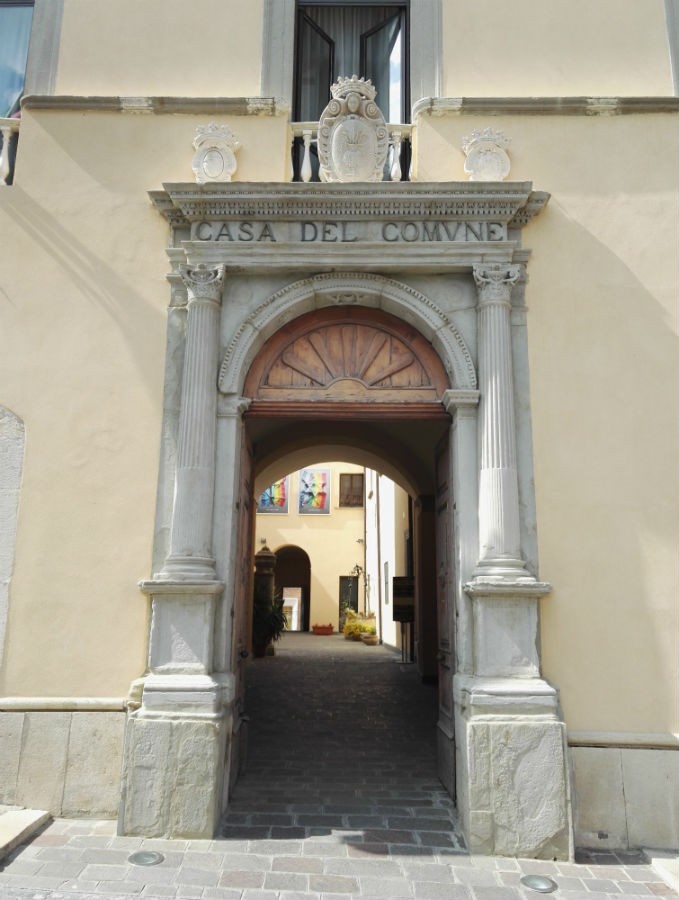 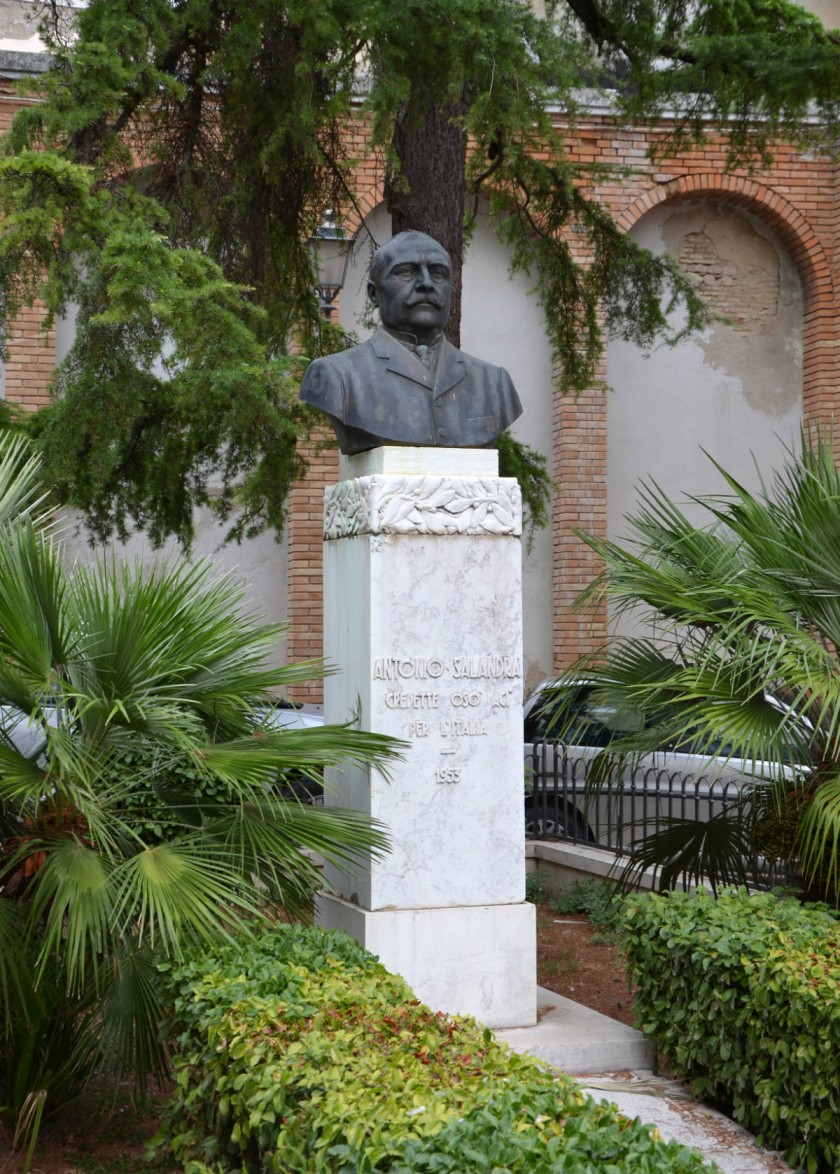 Antonio Salandra memorial. 33rd Prime Minister of Italy between 1914 and 1916 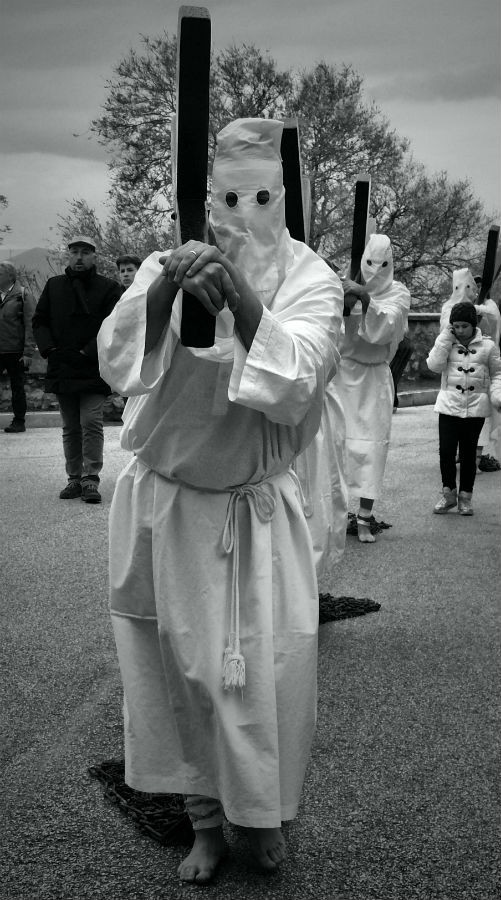 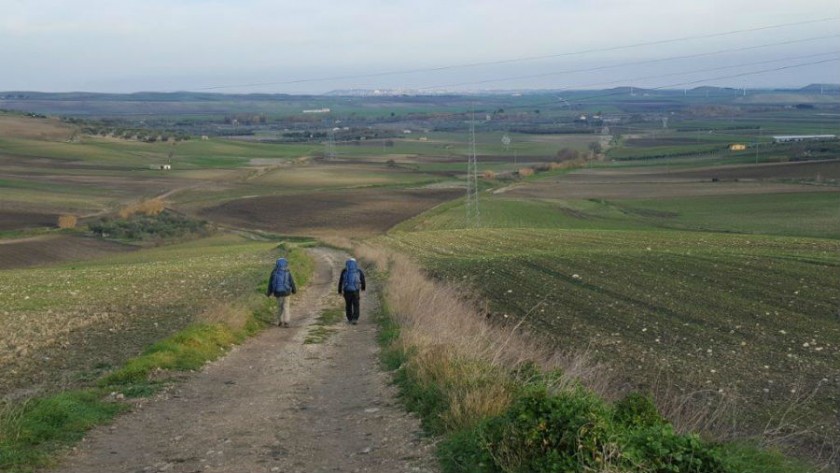 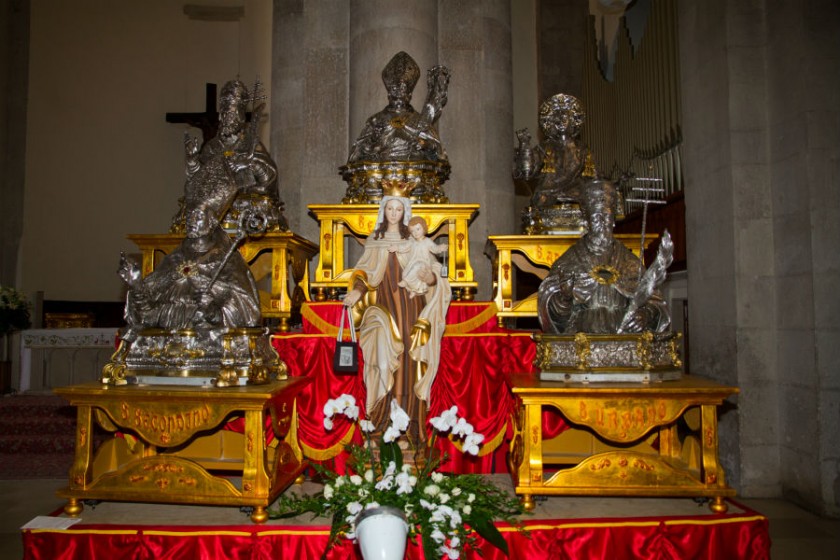 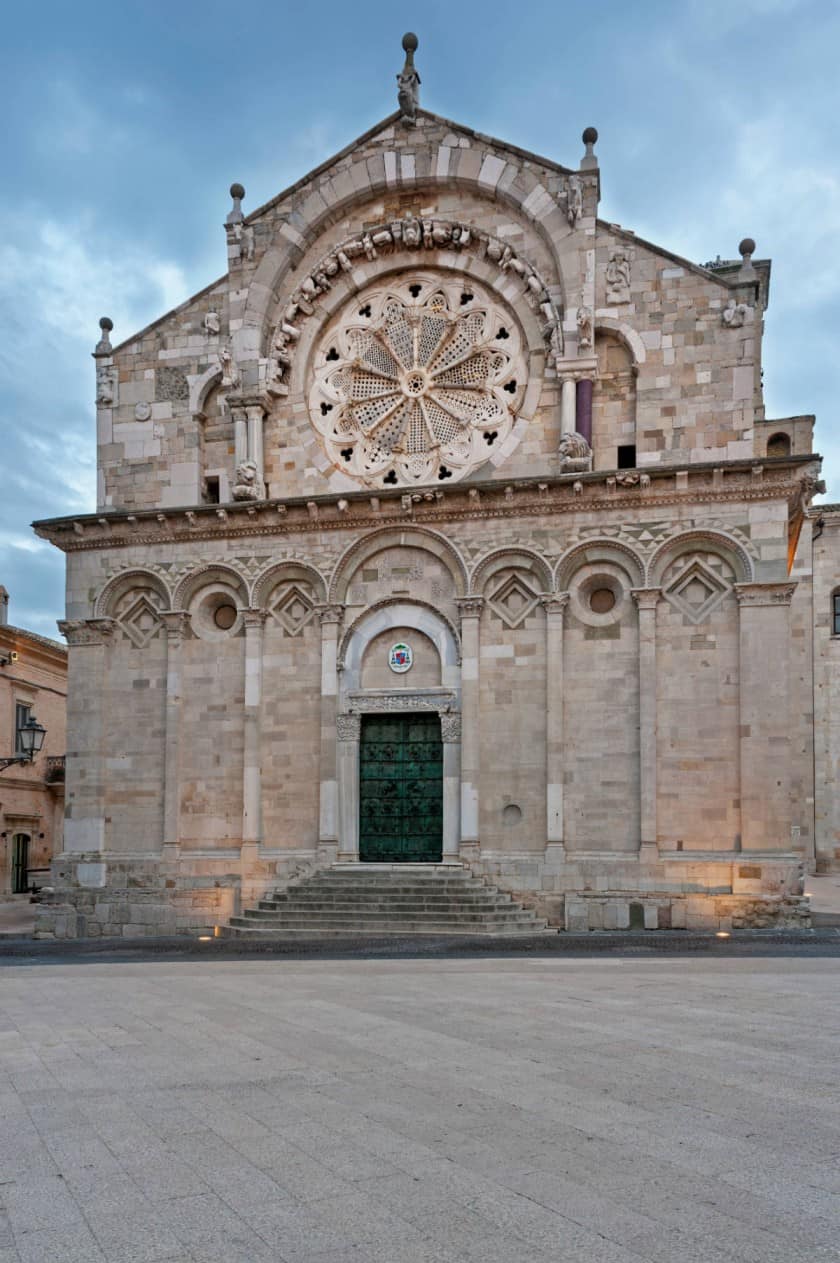 The village of Troia has ancient origins. According to the legend, was founded in the XII-XI century B.C. at the time of the Greek hero Diomedes who, together with Ulysses, conquered the city of Troy in Asia Minor. Some findings daterebbero the center to front age to the punic wars.
Before being colonized by the Romans, the town was known as Aika, subsequently Latinized into Aecae, which had a strong socio-economic development with Herdonia (the current Ordona), Ausculum (Ascoli Satriano), Arpi (Foggia), Teanum Apulum (San Paolo di Civitate). The present village was born in 1019. Troia, indeed he was officially founded to become a stronghold of the Byzantine Empire.

Then, in the first years of the year 1000, the Southern Italy was disputed between the Longobards and Byzantines, with Sicily to wear the clothes of the arab emirate. Puglia and Calabria, constantly on the brink of the revolt, head were formally to Byzantium. In this particular situation, with the Lombards little distant, established in the territories beneventani, north of Puglia was in fact the demarcation line between east and west.

The date of the foundation of the 1019 is inter alia be deduced from an incision in Latin on the bronze door said of freedom, placed on the right side of the Cathedral, forged in 1127, 108 years after the foundation of Troy.
The town was subject to numerous sieges, such as that of Henry II or that of the Emperor Frederick II of Swabia. In 1093, Urban II, the Pope of the crusades, held the first council of Troy, followed by the other three, respectively in 1115 (Pope Paschal II), in 1120 (Pope Callistus II) and in 1127 (Pope Honorius II).
The city is lined first with the Angevins, then with the Aragonese and more recently with the Bourbons, to which he remained faithful until the collapse of their monarchy. The name of Troy is inextricably linked to the history, as in the original coat of arms of the city was shown a sow, intent to breastfeed seven piglets. Subsequently Charles V the replaced in 1536 about with an amphora d'oro surmounted by a crown, from which guizzano five snakes, eternal remembrance of the cunning of its inhabitants.

The main points of interest in the village of Troia are constituted by its Cathedral, the Diocesan Museum and its Exultet hymn, the Palazzo di Città, or Avalos Palace (with the ghost of the marquis) and the Church of San Basilio Magno.

The territory surrounding the village also offers pleasant itineraries for excursions and walks, sometimes rich of history as the Via Francigena. Along the old Appia Traiana, in fact, over the centuries have passed armies, wayfarers and pilgrims to go from Rome to Brindisi. It came in the Daunia, after the station of Aequotutico, called Contrada Sant'Eleuterio and the first city that met him was Aecae. Here there was the deviation or for Lucera, Arpi and Siponto (to arrive at Monte Sant'Angelo), or to continue to Ordona and Canosa. At the end of the VI century the Daunia and the Sanctuary of San Michele in Monte Sant'Angelo began to be in the interest of the Lombards. Began the great pilgrimages that crossed our city and the first notation with the appellative of Francigena is found as an epithet that Gualtiero Francigena, Bishop of Troy, who in 1083 started the construction of the Church of Santa Maria that later became the cathedral. Troia-Aecae crossed along the Appia Traiana, then via Francigena, pilgrims and travelers on these routes: the Itinerarium Burdigalense (Bordeaux) in the year 334 pilgrims to go to Jerusalem; the itinerary of the holy places of Bernardo the assay in the year 870 to visit the sanctuary of San Michele in Monte Sant'Angelo; the itinerary of the pilgrimage of the holy places of Nikulas of Munkathvera, Abbot Icelandic (1151-1154) to visit the sanctuary of San Michele in Monte Sant'Angelo, travel from Corfu to France of Philip Augustus (1191) King of France return from the third crusade; the itinerary of an English pilgrim in the Holy Land and other holy places (1344-1345); the tinerarium de Brugis (half of the XV century) to go to the Holy Land; and finally the itinerary of Anselmo and John Adorno in the Holy Land (1470-1471).

A great history is always accompanied by a great gastronomic traditions. This is because Troia, together with the variegatissimo panorama of monuments and historical buildings of relief, offers an assembly of typical dishes of absolute interest. It starts by scaldatelli or taralli, typical bakery products, familiar to all the towns of Puglia, flavored with olive oil, fennel seeds, pepper and other spices and ingredients according to the recipe jealously guarded from each of the bakers citizens. Unfailing The Pancotto, a soup that speaks of the earth and of the peasant tradition, an embrace of flavors, recipe triumphant to the cuisine of the poor, which has now become a bulwark of our tables. The pancotto is widespread throughout the Puglia, but is in the province of Foggia that is declined in different ways from country to country. In Troy, to the excellent stale bread and potatoes, you add wild vegetables of the season (from chard with turnips, passing for catalogne and chicory), garlic, bay leaf and chili pepper, generously seasoned with extra virgin olive oil local. This is flanked by a skill for the most refined palates, cooked cooked, a traditional tripe soup from prolonged cooking, a gentle fire, seasoned with celery, carrot, onion and tomato, celebrated even in a festival to theme organised usually during the second week of August. Finally, how can we not mention the Nero di Troia wine, an autochthonous grapes, whose production is a wine with an intense red that fades to black. As the rest of the story of Troia, even the origins of this vine is forgiveness halfway between history and legend. Unfailing the myth that seeks brought in captained by part of the Greek hero Diomedes, while for others it seems it was a wine welcome to Federico II. After various vicissitudes, crops previously reduced in favor of varieties with higher yield, are now returning in vogue with the Nero di Troia in purity, resulting in a wine valuable from typical ruby red color with hints of liquorice and raspberry.

The Municipality is part of:
Paesi Bandiera Arancione

Via Municipio, 7, Biccari (Foggia)
10.22 Kilometers from Troia
Byzantine tower
the imposing Byzantine tower, dominating the village of Biccari, in Daunia, is situated in Puglia.

Piazza Duomo, 6, Bovino (Foggia)
12.51 Kilometers from Troia
The Ducal Castle
The rooms of the Palazzo Ducale di Bovino offer the possibility to visit the small but charming p...

Castello di Bovino, Bovino (Foggia)
12.51 Kilometers from Troia
The house of the Captain
This is one of the historic buildings more interesting in the village of Faeto. Therein lies the ...

Piazzale Santa Maria delle Grazie - 71013, San Giovanni Rotondo (Foggia)
51.89 Kilometers from Troia
The Church of Annunziata
Probably built in the course of the XVI century, outside the walls of the ancient town center, is...

Find where to sleep in Troia

Our news about Troia

Discovering 4 Easter rites in the villages of Southern Italy
Photo by notizie.comuni-italiani.it Easter rites are very popular throughout the country, especially in the villages of southern Italy and the islands, where there is a strong link with customs of Spanish origin, which date back to the periods of Iberian domination and have been handed down almost intact to the present day. Below we discover some of the most characteristic and original Easter celebrations in the villages of southern Italy. ...
Continue
Award ceremony: Monte Carlo Master of Olive Oil Contest 2021
On June 5, the Principality of Monaco hosted the most important companies producing oils at the gardens Princesse Antoinette, with an event-prizes of great international scope.The Monte Carlo Master of Olive Oil Contest 2021 has seen the participation of 170 oils from 3 continents who have competed for the various awards divided into categories and assigned by the jury of experts. An event to promote the excellence of the olive oil sectorThe competition, now in its fifth edition, has b...
Continue