Share
The historic center of the village of Monte Vidon Corrado, of medieval origin, has civilian homes with terracotta decorations from the 15th century and remains of fortifications from the 14th - 15th centuries. In the upper part of the town, in fact, two towers that still belonged to the walls of the medieval castle are still visible. The panorama that can be admired at Monte Vidon Corrado ranges from the Adriatic Sea to the Sibillini mountains, from the cultivated countryside to the suggestive villages perched on the surrounding hills.

A look at Monte Vidon Corrado 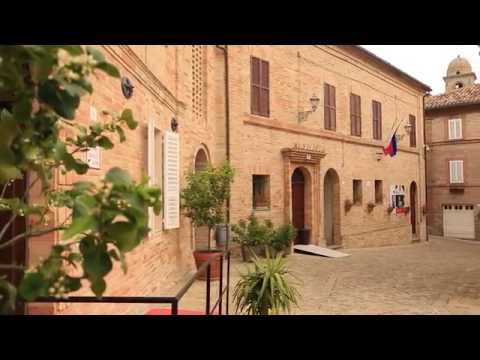 The origin of the village of Monte Vidon Corrado is still unclear, as historical information is mixed with legendary and fabulous elements. Although we do not know archaeological findings dating back to pre-Roman times found in the municipal territory, the contiguity with Falerone (Falerio Picenus) suggests that even on the hills of Montevecchio there were settlements dating back to the III century BC, when the Piceno entered the sphere of influence of Rome .

The fortress of Monte Vidon Corrado was mentioned for the first time in a document of 1229, at the height of the long struggle between the Papacy and the Emperor Federico II, associated with a group of castles belonging to lay gentlemen of Longobard or Norman ancestry with whom it constituted a rather rich and unitary military-feudal bulwark. In 1300 it passed under the jurisdiction of the city of Fermo and then underwent the domination of the Malatesta between 1413 and 1416, the year in which Ludovico Migliorati, Lord of Fermo, recovered Monte Vidon Corrado along with Mogliano, Falerone, Massa and Montappone. From the 16th century until 1860, Monte Vidon Corrado was firmly under the dominion of the pontifical administration, part of the Apostolic Delegation of Fermo, and its history became confused with that of Monte Giorgio "of which it suffered the adverse and prosperous fortune". There are no other archival sources that can give us reliable and reliable data, except for those concerning the population that at the end of the 19th century was 1300 inhabitants, of which only 150 lived in the main center.

In the upper part of the village are still visible two towers that belonged to the walls of the medieval castle dating back to the XIV-XV centuries. Linked to this castle is the legend of Corrado, son of Fallerone I, who would have helped his brother Guidone against a nearby feudal lord who wanted to subdue the territory. The messenger, on horseback, would give Corrado a missive on which was written: "Corri Corrado that Guidon fights". From here we derive the toponyms of Monte Vidon Corrado and Monte Vidon Combatte.

Piazza della Vittoria is the heart of the town that preserves almost intact the architectural structure of the medieval castle. Here there are some noble palaces, the rectory which leads to one of the towers of the ancient fortress and the parish church dedicated to San Vito Martire. From the square there are alleys and small squares overlooked by elegant civil homes, a fifteenth-century palace with terracotta decorations and a pointed ogival arch, the study center and the birthplace of the painter Osvaldo Licini. Once in the historical center (precisely in the building where today the municipal archive is located) there was a sort of clinic and first aid where doctors and nurses visited and carried out small surgical operations, the Ilari Hospital. Then there were some classes of the school, the workshops of artisans (such as that of the shoemaker and the blacksmith, perhaps from here derives the name of Via Fucina), an inn and obviously the seat of the town hall that is still present today.

The panorama that can be admired in Monte Vidon Corrado ranges from the Adriatic sea to the Sibillini mountains, from the cultivated countryside to the charming villages perched on the surrounding hills. The enchanting panoramic terrace adjoining the house of Osvaldo Licini and the pictorial park that in the summer is tinged with the colors of the Licinium palette are privileged places to immerse yourself in the suggestive and uncontaminated nature that so loved the great master of Monte Vidon Corrado.

A special mention goes to the enogastronomy of the Marche region, to the typical products of the territory of the village, such as olive oil, sausages and cheeses, to typical dishes, absolutely to try, like Caciù co 'la fava (thin sheets of pasta with filling of fava puree) and pizza with figs, a poor dessert made with bread dough enriched with dried figs and walnuts, typical of the Christmas period.

Monte Vidon Corrado together with Falerone, Massa Fermana and Montappone is part of the historic straw district, which has eighteenth-century roots. In ancient times, a large part of the population was employed in the entire production cycle, from harvesting to the processing of braids, to the production of hats to the sale in fairs and markets.

The wheat sown in November was harvested with the messy sickle already at the end of June, just before perfect ripening to obtain a natural whitening. The sheaves, brought to the barnyard with the cart, were placed on a wooden ladder, placed horizontally. Men, women and boys paraded heads of ears, putting them all at the same height, a man picked them up in a larger handpiece and with a scythe he cut off the ears. The knots of the culms placed one by one at the same height, with the pruning shears, were cut away under and above and finally the leaf sheaths were removed. The straws were graded according to the caliber in order to have a homogeneous braid.

This operation was carried out manually by evaluating by eye but only perfect with the use of the "sifting machine". The threads of straw were tied in bundles that opened as a fan were left, vertically in the farmyard, exposed to the action of the sun and the dews for a natural whitening. If the operator believed that the blanching was not perfect, he would turn to sulfur, which he placed in wooden boxes already full of straw mats for an entire night. The straws before being intertwined were soaked that during the processing they did not break.

The most common braids were those of four straw, seven and thirteen threads. Once realized, the braid was cleaned up by the spikes of the sheds with a knife or scissors. To make the braid more malleable to the seam (especially machine), it was passed through two wooden or iron rollers (torchietto). The braid was sold in skeins (patches) obtained by wrapping it on a measuring instrument called "passetto".

The traditional hat called "of the harvest" was sewn by hand with a thick needle and the needle; hem against hem taking a vest inside and one outside. Thanks to the ability of the stapler the points of the refe were invisible disappearing between the meshes of the braid. In more recent times the seam was made with a pedal sewing machine, then subsequently motorized. It gave proper shape and polishing, putting the hat in a form of wood and smoothing it, pressing, with a hard wood mallet; in addition, an iron heated on the embers was also used.

Subsequently this phase evolved with the use of a series of wood and iron presses. The traveling hatter carried and exposed the hats on a bar: a "perch" of willow balanced on a goad that was fixed in the ground during sales or breaks.

Inside the Walls Festival