Share
Located a few kilometers east of Alba, the charming village of Barbaresco is known for the production of the homonymous wine, recognized worldwide, around which today a large part of the tourist flow rotates and which represents the most important item of the local economy .

A look at Barbaresco

Barbaresco, December 2017. In the Langhe there...
Carola Ferrero - e-borghi Community 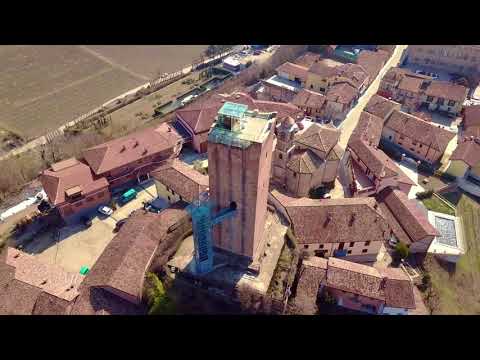 The area of the village of Barbaresco (Barbaresch in Piedmontese) is known as historically barbaric sylva, where ancient Celtic populations it withdrew in adoration of God Tanaro. It is believed that this area has been the birthplace of a figure a little nebula: the Roman emperor Elvio Pertinace. But today the fame, glory and the pride of this small village on the hills around Cuneo are entrusted only to wine and to the art of the tenants.

The territory of Barbaresco was inhabited since prehistoric times. In that period the beautiful and fertile hills of our common were covered by thick woods with some rare green space along the banks of the river Tanaro and there dwelt Barbarian people of the Liguri Stazielli. It was populations, Rudi and strong, the Ligurians had a sacred forest that had dedicated to a divinity named in the Celtic "Martiningen" which represented the force. With the arrival of the Romans this area was dedicated to the god of war Mars. There grew gigantic oaks, symbol of strength and resistance, surrounded by sources of salted water today still exist.

The first nucleus of the organized area are probably of the Ligurians that inside of wooded areas they trusted to escape the Roman colonisation that had great momentum during the reign of Augustus. The name Barbaresco, derives from the term "Barbaric silva". The first roman settlement is named "Villa Martis", which can be considered the first inhabited center of this area, inside which there was a "taberna" or a furnace of bricks. Not the case at the beginning of the twentieth century, during digging ditches for bolts were found some tegoloni Romans. It is very likely that the presence of this "taberna" and the realization of the Roman road through the Valley of the Martinenga who developed the trades with the nearby Alba Pompeia marked the end of barbaric Sylva. Soon the forest gave way to the cultures of the hills.

Today in some dialect terms as "Bric", that indicates a hilly hill, you can find traces of the ancient Celtic language. With the fall of the Roman Empire the Langhe became a land of conquest first for the Lombards and subsequently to the Franks. There are testimonies that attest that the southern Langa, between the end of the IX and X centuries was shaken repeatedly by the raids of the Saracens that they arrived in Liguria. The diocese of Alba was so impoverished by be assimilated from 985 to 992, by order of Pope John XIII to that of Asti. At the time the territory was under the political control of Roggero, who had to face your opponents Arduino, Aleramo and Oberto.

The fortified village, as we know it now is originating in the middle ages, a period in which it was carried out the tower and the castle. Barbaresco was a fortified village and at that time dates back the motto that dominates in the municipal coat of arms "Barbarisco De Turris Et Arx". Developed what is defined as "Piedmontese ricetto", a fortified area within which you rifugiava the population on the occasion of external dangers. In the Medieval period in the territory of Barbaresco was disputed between rival cities Asti and Alba. In the course of the centuries Barbaresco was, as the whole territory langarolo contention between various Lords, within the scope of the wars that have brought the Piedmontese territories under different potentates, until the final affirmation of Savoia. Also the country langarolo at the end of the XVIII century it was shaken by the winds of the French Revolution and the 31 December 1798 was created the municipality of Barbaresco. The life of the country was soon greatly influenced by the cultivation of the vine, wine production has always been important for Barbaresco. The economy between the XIX and XX century was purely agricultural, knowing a great development in the last decades of the '900. In fact after the second world war the territory of Barbaresco and Langhe not enjoyed great wealth.

The Barbaresco DOCG is marketed in every continent and is considered one of the most prized wines at world level.

Strada Provinciale 125, 28, Serralunga d\'Alba (Cuneo)
14.16 Kilometers from Barbaresco
Serralunga Castle
The Castle of Serralunga d'Alba, in Piedmont, dominates the village that is located on the ridge ...

Piazza Umberto I, 69, Serralunga d\'Alba (Cuneo)
14.26 Kilometers from Barbaresco
Serralunga Castle
The Castle of Serralunga d'Alba, in Piedmont, dominates the village that is located on the ridge ...

12030 - San Bernardo, Ostana (Cuneo)
70.19 Kilometers from Barbaresco
Parish of St. Peter the Apostle
The Church of San Pietro apostolo dates back to the second half of the thirteenth century, but it...

Via Santa Maria del Piano 77 , Neive (Cuneo)
3.48 Kilometers from Barbaresco
Langhe Country House
In the UNESCO Heritage Sites, you will find the right place for a relaxing and warming holiday.

Via Pallareto, 15, Neive (Cuneo)
4.37 Kilometers from Barbaresco
A nostro Mizoun
An authentic agriturismo with an overlook on the mountain of Monviso where you can taste local di...

Località Durandin 39, Ostana (Cuneo)
69.80 Kilometers from Barbaresco
Rifugio Galaberna
At the Galaberna refuge we try to create the right atmosphere for you to relax in thanks to a fri...

Località Villa 18A - 12030, Ostana (Cuneo)
70.75 Kilometers from Barbaresco
Langhe Country House
In the UNESCO Heritage Sites, you will find the right place for a relaxing and warming holiday.

Langhe: journey to the villages of Alba, Barolo, Barbaresco and Neive
It is time for truffles in the lands of Barolo and Barbaresco. In the heart of the Langa hills, in the shadow of castles and vineyards, Alba has once again become, as every year, the world capital of taste. October and November are the months of the International Truffle Fair of Alba, showcase of flavors and culture of a unique and extraordinary land. Alba is a triumph of events and parties, exhibitions and meetings that attract tourists fr...
Continue
Recipe: Panna cotta
Dessert of Piedmontese origin, in particular from the Langhe area, whose birth would date back to the early 1900s by the starred chef Ettore Songia. It is a delicate pudding very simple to make, using: cream, milk, sugar and flavored with vanilla bean seeds and adding the gelatine sheets to firm the mixture once placed in the refrigerator. It is usually served with berry sauce, caramel or chocolate.Today it is a dessert that has become famous all over the world, especially in Greece, France and England, whose similar recipes use egg...
Continue
Recipe: The Cisrà. The tripe and chickpeas soup typical of the Langhe
The Cisrà is a typical dish of the Langhe area, in Piedmont, based on chickpeas and tripe. This soup was originally prepared with dark chickpeas of Middle Eastern origin. Today we prefer italian chickpeas, which are much tastier. This poor dish has very ancient origins and it is said that during the feasts dedicated to the saints, this dish was distributed, still warm and steaming, to the faithful. Ingredients 400g Tripe 200g Dried chickpe...
Continue
The legend of the Rocca of the Seven Brothers in the Langhe
A Langhe legend tells of seven brothers who worked hard on a hillside. The work was very tiring and disappointment and despair afflicted them to see the meager meals brought to them by their sister. On a Friday, abstinence date according to Catholic canons, the seven brothers began to insult the sister and to swear to the rule that had led her to prepare such a thin lunch. Hungry and angry, the seven brothers continued to swear while a procession led by the pastor was approaching. The procession was carrying a holy viatic ...
Continue