Share
Oratino from a height of almost 800 meters above sea level dominates the middle valley of the Biferno river for a long stretch. From the hill where the inhabited center stands, a spectacular panorama opens up, from which it is possible to see with the naked eye numerous villages located in the upper Molise and southern Abruzzo. 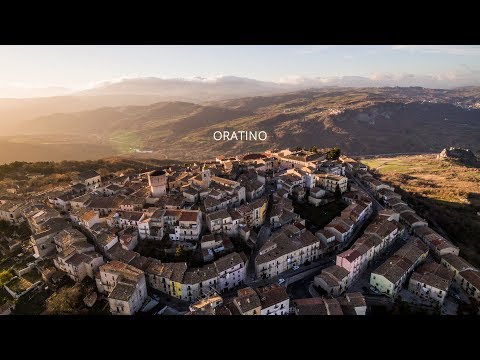 The name of the village of Oratino, in Molise, was originally Loretinum. The feudal succession was quite complex and is not characterized by the constant presence of a single family. One of the first holders was Eustachio d'Ardicourt (1268), to which his son Adamo I d'Ardicourt succeeded; were probably deprived of Oratino's violence, as in the course of the feudal revision of 1279, quoted by Carlo I d'Angiò, they proved to be untraceable. Under Carlo II of Anjou, at the end of the 13th century, we have such a "John of Lando" as a feudal lord. In the year 1333 Oratino belonged to the demo for unknown causes. On June 6 of that same year, King Roberto d'Angiò gave him his wife Sancha d'Aragona, who kept him until his death in 1345. In the fifteenth century, Oratino was a member of the Evil, then of the Gambates, until 1495 Up until 1507 it was later Capua's. Ferrante di Capua sold it to the barons Rizzo of Naples, from which he passed by inheritance to Caracciolo. In the rest of the sixteenth century the patrizi Coscia of Naples took over. Before 1586 Oratino became Spaniard of Silva, to be alienated in 1630 to Ottavio Vitaliano (killed on June 29, 1639), which became in 1638 the Duke of Oratino. The feud lived with his son Ottavio a hard period. Antonio Vitaliano (living in 1699), IV and last Duke of Oratino, sold it to the Jordan, which were named Dukes of Oratino (Diploma of August 10, 1729), a title confirmed by the Kingdom of Italy (1882).

They certainly deserve a visit to Palazzo Giordano, the Church of Santa Maria Assunta and the Church of Santa Maria di Loreto. The latter, dating back to the 18th century, features decorations of the Ciriaco and Stanislao Brunetti brothers dating back to 1757. During the restoration work, the remains of a medieval worship building have come to light. This typical countryside church has been restored to the setting of the central altar and traces of the original terracotta pavement. Subsequently the church became a three-nave with almost square plan, with a wooden ceiling and central steps to access the presbytery. There were three altars, the central one entitled to Madonna del Loreto, the left one dedicated to S. Rocco and the right one to S. Sebastiano.

Do not miss the visit of the Rocca di Oratino, not far from the village, and the panorama of the Biferno Valley that it offers. In 2004, Sergio Castellitto shot scenes from his film: Do not move with Penelope Cruz in Molise. In a scene of these you see, while traveling by car, the Fortress.

Via Selva, Frosolone (Isernia)
11.38 Kilometers from Oratino
Rock Church of Sant'Antonio Abate
The Rock Church of Pietracupa in Molise, is located inside the Morgia overlooking the village fro...

Viale F. Ciccaglione, 20-24, Riccia (Campobasso)
23.57 Kilometers from Oratino
St. Pardo's Cathedral
the basilica of Santa Maria Assunta and San Pardo, is situated in the village of Larino, in Molise.

Via Raone, 1, Larino (Campobasso)
36.08 Kilometers from Oratino
Castello Svevo
This castle is the most representative structure in the coast of Molise. It was built around the ...

Via Montecastello, 86039, Termoli (Campobasso)
57.70 Kilometers from Oratino
A' Rejecelle
Located in the heart of the ancient village is one of the most unique and characteristic places o...

SS 650, Roccavivara (Campobasso)
29.90 Kilometers from Oratino
Rock Church of Sant'Antonio Abate
The Rock Church of Pietracupa in Molise, is located inside the Morgia overlooking the village fro...

Salita Piave, 13, Pietracupa (Campobasso)
12.03 Kilometers from Oratino
Cathedral of Termoli
It is built on the highest point of the Borgo Vecchio of Termoli

Weekend in Molise, Larino, Oratino and Frosolone
Almost equally divided between mountains and hills, the lands of Molise, land of villages, small towns and sea. That Adriatic sea on which one of its main cities, Termoli, is also the main port. From here begins the discovery route in the heart of this often unfairly forgotten region. It is the Sannitica highway, which stretches out in the countryside from the coast to the heart of the region, leading us to Larino. Before leaving the car an...
Continue