Share
Colorful houses, shopping streets, picturesque medieval squares and a mountain landscape that seems within reach: the alpine city of Vipiteno in Valle Isarco enchants its visitors with a unique charm. The symbol of the Alpine village is the Torre delle Dodici.

Carousel at the Christmas Market 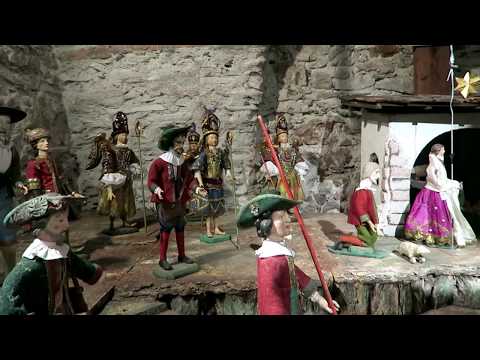 The seat of the Community district Wipptal (already Alta Valle Isarco) and situated at 950 m above sea level, is dominated by the Monte Cavallo (Rosskopf, 2.176 m) West, Cima Gallina (Hühnerspiel, 2.800 m) north-east and top of Stilves (2.422 m) to the south. On the slopes of Monte Cavallo you are the lifts of the ski area of the country, which can be reached in just a few minutes from the center. In addition to the normal ski facilities, is also one of the longest toboggan runs in South Tyrol, long little more than 10 km. In the summer it is possible to make excursions on foot and by bicycle on the surrounding mountains. Of Roman origin remain a few things like a cippus milestone of Septimius Severus, in which however does not appear in the name of the city. The assonante Uuipitina instead is attested in a document of 827. In a medieval map, copy of an ancient Roman street plan, Vipitenum appears. The first roman settlement could date back to 14 B.C., when on a communication route between Italy and the countries beyond the Alps, Drusus the greater founded a military station with the name of "Vipitenum". Of the Roman period are the sepulchral monument to Postumia Victorina and a cippus with mitriaco bas-relief. In 550, after an invasion of the Bavarians, developed the village of Vipiteno, but only in 1180 it has the first mention of "Stercengum". There is a legend that tells of Störz one cripple pellegrino which the first inhabitant of the modern city, which even now remains in the city emblem under the wings of the tyrolean eagle. In reality this figure in the coat of arms could also suggest to three hospices that the country had in the past. Vipiteno knew its maximum splendour in the XV and XVI century especially after the fire, that in 1443, damaged part of the city. Were reconstructed buildings embattled, some late gothic, in New Town, which still decorate the main street. The toponym italiano Vipiteno resumes the ancient Latin name of the alleged Roman camp of Vibidína and is attested as Uuipitina in 827, connected with perhaps the name of Etruscan person *Vipina and with the vallis Vipitina (Alta Valle Isarco) become in German Wipptal. The toponym german, instead, is attested as Sterzengum from 1180 and derives from the name of person Starzo Germanic, with the meaning then "land of Starzo". Since then the village was known to Italian merchants as Sterzen (fact recognized by the same Tolomei) or Sterzinga. Do not miss the visit of the parish church "Madonna della Palude" (Unsere liebe Frau im Moos), located just outside the city. It is the Church more high between Munich and Verona; measure 32 meters in height, the nave is 38 meters long and 23 meters wide. Other suggestions will affect visitors admiring the Tower of the twelve (Zwölferturm), which has become the symbol of the city, which divides the town New (Neustadt) from the Old Town (Altstadt). Completed in 1472, is high 46 m. The Palazzo del Municipio, instead, in late gothic style, was purchased by the city in 1468 and then in 1526 it was restored and enriched by the characteristic "Erker". On the ground floor was made a tour of bread and on the back that of meat. On the upper floors the offices, the Council Hall, still one of the most beautiful in the Alto Adige, and a ballroom. Finally, inside the ancient commendam of the Teutonic Order (the Deutschhaus), located near the Parish Church, you can visit: the Civic Museum Multscher, the Church of Saint Elizabeth, the Musical Institute and the seat of the Bürgerkapelle Sterzing (musical band Vipiteno). The Museum exhibits a collection of maps of epoch, historical documents about the town and old prints of landscapes citizens; a section is dedicated to the local handicraft. The Multscher Museum preserves the projects and the valuable tables of the gothic altar, built by Hans Multscher for the Parish Church. Do not miss the events more traditional methods such as the parade along the streets of the center of the krampus (devils in mask), on the occasion of San Nicolò (on the evening of 5 December), the Christmas Market, the festival of canederli, the festival of yoghurt and the historical Festival (Sterzinger Osterspiele), which is held every year at the close of the Passover.

Via Brennero, Fortezza (Bolzano)
20.00 Kilometers from Vipiteno - Sterzing
Sabiona Monastery
The Sabiona monastery rises on a high cliff that supervises the village of Chiusa in Isarco Valley.

Hotel Restaurant Lilie
Among all the hotels in Vipiteno, the Hotel Lilie conveys a truly unique charm.

Masseria 22 - 39040 Ridanna, Racines (Bolzano)
11.79 Kilometers from Vipiteno - Sterzing
Albergo Zur Post
In the heart of the medieval town of Glorenza, in the middle of the Venosta Valley, Hotel Posta o...

Via Flora 15 - 39020, Glorenza (Bolzano)
71.39 Kilometers from Vipiteno - Sterzing
Parc Hotel Florian
A relaxing experience at the foot of the Seiser Alm

Via Henrik Ibsen 17, I - 39040 , Castelrotto (Bolzano)
40.45 Kilometers from Vipiteno - Sterzing
Hotel Seelaus
Your Hotel in the Alpe di Siusi at 1,800 m directly at the slope and the hiking paths

Via Compatsch 8 I-39040 Alpe di Siusi , Castelrotto (Bolzano)
42.13 Kilometers from Vipiteno - Sterzing
Hotel Walther von der Vogelweide
In our opinion it is the best place to have a stay in Chiusa. It is located in a building in the ...

Città Alta 66, Chiusa (Bolzano)
30.25 Kilometers from Vipiteno - Sterzing
Zum Turm Hotel
Historic hotel in the enchanting village of Castelrotto is embraced by the Dolomites and is the p...

Via Geizkofler 15 , Vipiteno - Sterzing
Johannserhof
Open from October to March, the farmstead run by the Brunner family produces an excellent Müller ...

Via Flora 9, Glorenza (Bolzano)
71.46 Kilometers from Vipiteno - Sterzing
Laimburg Winery
Laimburg Winery, in the province of Bolzano, is part of one of the towns on the South Tyrolean Wi...

Laimburg 6 I-39040, Vadena (Bolzano)
54.57 Kilometers from Vipiteno - Sterzing
PUNI distilleria
Outside the mighty walls of Glorenza there is the PUNI distillery, the first and only whisky dist...

Trentino Alto-Adige: an itinerary between artists, markets and legends
Organizing a holiday in Trentino Alto Adige does not necessarily mean having to choose big cities such as Trento or Bolzano, or the most iconic places (Tre Cime di Lavaredo, Lago di Braies, Selva di Val Gardena, etc.). There are in fact small towns that deserve a visit of at least half a day, to experience the authentic spirit of this region. We start from Canale di Tenno, a charming medieval village not far from Riva del Garda and a few hund...
Continue
The bell tower of Lake Resia and the ancient submerged village
In the world there are places that border on the unlikely. Among these, Lake Resia, from whose waters a mysterious bell tower appears. The scenery seems to be taken from a fantasy film, a dreamlike vision that materializes in the presence of the only surviving structure of an ancient Alpine village, extinct over half a century ago. The dramatic fate of Curon Venosta, which today is a South Tyrolean village of about 2,300 souls overlooking the ...
Continue
5 unmissable villages for their Christmas Markets 2018
5 villages to immerse yourself in the fairytale atmosphere of the Christmas Markets: soft lights, toys and gifts, decorations and gifts while the Christmas melodies are released in the air accompanied by the spicy scent of mulled wine Advent is the most evocative period of the year, one in which the villages seem like miniature nativity scenes and there is no age limit to get excited. There are many Italian fairytale villages dotted with woo...
Continue
Recipe: Apple strudel from Trentino-Alto Adige
South Tyrolean cuisine is the expression of two great culinary arts: the tasty Tyrolean cuisine and the graft of imaginative Italian cuisine. All with a hint of Viennese, Hungarian and even Bohemian flavor. It is therefore the variety that distinguishes the South Tyrolean cuisine and there is no single recipe for its most famous dessert, the Strudel. If the filling mostly presents variation...
Continue
The legend and the parades of the fearsome Krampus
The Krampus are goat men with long pointed horns. Their skin is covered with a thick sheep fur, the face is hidden behind a terrifying wooden mask and dressed in dirty and untidy rags. Their arrival is announced by violent cowbells, sinister grins and chilling screams. Krampus roam the streets with whips and chains. Their mission is to unleash their anger against whoever they encounter on their way but above all they are looking for children who have been bad during the year, to punish them.
Continue