Share
Also known as Jerusalem novella, Sansepolcro is a small gem of the Valtiberina, which dominates from the top of its 330 meters, as well as being the city of Piero della Francesca. Around the village in the province of Arezzo the view is lost among the hills of nearby Umbria and the mountains of Alpe di Catenaia, a natural outpost of the Casentino forests. Discover why a visit to Sansepolcro is so special: the places of interest not to be missed, the curiosities linked to the origin of the village and the typical dishes to taste during a stay. 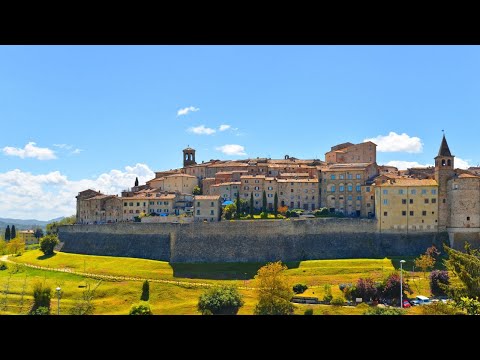 Historical notes
Historical sources agree on the presence of small human settlements around the pre-existing abbey of the Valtiberina since the 6th-7th centuries, in the Lombard age. Thanks to its fortunate position, Sansepolcro has always been a popular trade destination. Even today, the village is famous for being in the centre of Italy, bordering four different regions: Umbria, Marche, Emilia Romagna and Tuscany. In the 14th century the village was placed under the domination of the Visconti family and then passed to the Malatesta family of Rimini. In the first half of the fifteenth century the final turning point under the domination of the Medici, during which Sansepolcro developed the present architectural structure so loved by its visitors.

What to see
Art lovers cannot do without visiting the Civic Museum of Sansepolcro, where two of the most beautiful paintings by the famous painter Piero della Francesca are kept: the Madonna della Misericordia and the Resurrection. Also in the Civic Museum there are two other works by the Italian artist of the fifteenth century: San Ludovico and San Giuliano. You can also combine a visit to the museum with a visit to the house where Piero della Francesca was born, paying a single ticket.

Aboca Museum
During a stay in Sansepolcro do not miss a visit to the Aboca Museum, an excellence of Valtiberina for anyone who is passionate about medicinal herbs. Inside the museum, housed in the Bourbon al Monte Palace, there are many small rooms each dedicated to a specific theme. Among the most popular are: Sala delle Erbe, Sala delle Ceramiche, Sala della Storia and Antica Spezieria. The latter is a faithful reconstruction of an old workshop in the village where natural remedies were sold to the population.

What to do
Within the territory of the village stands the Hermitage of Montecasale, founded by St. Francis in the early thirteenth century. The whole structure speaks of the Saint. Do not miss what has been renamed as the source of St. Francis: according to popular tradition, the water source was created by the poor man himself. In addition there is the so-called Sasso Spicco, where it is said that the future Saint competed with a nice nightingale in praising the Lord. The convent is located along the path of faith travelled by Saint Francis himself.

The town owes its notoriety mainly to being the birthplace of Piero della Francesca and the home of Kentucky tobacco. Only when you arrive in Valtiberina you discover the reality of Tuscan cigars, with entire expanses of field dedicated to tobacco harvesting. Even if you are not a smoker, you are still attracted by the story of the owner of the Compagnia Toscana Sigari, which is based in the village of Arezzo. During the guided tour inside the company you will also be given the opportunity to learn how to make a real Tuscan cigar. So why not put yourself to the test?

Typical dishes
Located in the heart of Valtiberina, Sansepolcro is known throughout Tuscany and the rest of Italy for some delicious local products. Above all, the Chianina steak, which the world knows as the Florentine steak. The Chianina meat and cold cuts originate from the Val di Chiana, located just below the Valtiberina. Other specialities that can be tasted during a stay in Sansepolcro are the cheeses, the Buitoni pasta (born right in the village of the valley crossed by the Tiber river), the white dwarf coco bean and taleggio cheese served with truffle fondue.

Curiosity
The name Sansepolcro derives from the legend of Saints Egidio and Arcano, who, according to popular tradition, arrived in Valtiberina from the Holy Land and built a chapel where the Holy Relics were kept. In the following years, the Benedictines built a monastery around the chapel, around which the village was later founded. Because of the presence of the Sacred Relics, the village itself was called the Holy Sepulchre, today abbreviated to Sansepolcro. Novella Gerusalemme was the other name with which the village was identified by its first inhabitants.

the Municipality is part of:
City of Chianina

Corso Garibaldi, 45/1, Citerna (Perugia)
8.21 Kilometers from Sansepolcro
Cenacolo of Montauto
The Cenacolo di Montauto is situated in Anghiari, in Tuscany.

52031, Anghiari (Arezzo)
10.66 Kilometers from Sansepolcro
Porta Murata
The Porta Murata of Lucignano is a typical example of medieval military construction, composed of...

Via Senese Aretina, 80 - 52037, Sansepolcro
Borgo I Tre Baroni
Within the green heart of Tuscany, in the Casentino valley, I Tre Baroni is located in a great po...

Loc. Torricella, 14 - 52014, Poppi (Arezzo)
34.61 Kilometers from Sansepolcro
Albergo Casentino
Casentino is a heap of suggestions and values in which humans and environment are still able to h...

Piazza Repubblica, 6 - 52014, Poppi (Arezzo)
34.53 Kilometers from Sansepolcro
Parc Hotel
The best starting point to discover the wonders of the Casentino valley and breathe the air of th...

Via Roma, 214, Poppi (Arezzo)
34.39 Kilometers from Sansepolcro
Fattoria Poggio di Dante
A place situated in the nature of Casentino.

Strada prov.le dei Guazzi, 24 - 52014, Poppi (Arezzo)
32.51 Kilometers from Sansepolcro
Agriturismo Poggio a Poppi
The ideal holiday for those who want to know the flavours of the Tuscan countryside, but also for...

Via Rosciano, 49 – 06010, Citerna (Perugia)
7.48 Kilometers from Sansepolcro
Tartufi Bianconi
The Azienda Tartufi Bianconi deals with the processing and sale of the Truffle of the Upper Tiber...