Share
Located within the National Park of the Casentinesi Forests, Monte Falterona and Campigna, the village of Poppi is known for the mighty Castle of the Guidi Counts. Even today the village shines with an architectural harmony that makes its visit particularly suggestive, becoming part of the most beautiful villages in Italy. 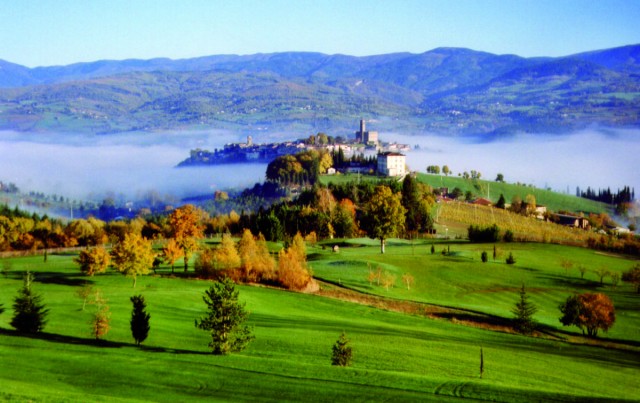 Poppi is located in the center of the Casentino, inside the National Park of the Casentino Forests, Monte Falterona and Campigna. The village is dominated by the mighty Castle of the Counts Guidi, inside the Rilliana Library, rich in hundreds of medieval manuscripts and incunabula. The history of this town dates back to the 12th century when it became the main residence of the Counts Guidi, in 1440 it passed under the dominion of Florence.

Today the village shines with an architectural harmony that makes its visit particularly suggestive, becoming part of The Most Beautiful Villages of Italy. Walking through the town it is possible to visit the Abbey of San Fedele, dating back to the 13th century, which preserves valuable works of art, including a Madonna with Child from the end of the 13th century.
Even the Oratory of the Madonna del Morbo is definitely worth a visit.

In Poppi, the ancient art of furniture is widespread and renowned, thanks to which objects ranging from the Renaissance to the modern style are made, passing through the rustic style.

The microcosm of venerable hermits, innkeepers, friars, jugglers, penitents, abbesses, converted and Madonnas that, in Fiabe fantastiche by Emma Perodi (1892), recite their part on the same depth of the Casentino, enlightens us on the essence of this valley that draws a different Tuscany: not the one of Giglio, Fiorentina, elegant geometric, harmonica, Renaissance, but that where the Arno opens the road in the middle of the mountains of the Apennines, toward the borders of Romagna. Here, everything is more forested, more mystic. Here, the ravines in the caves and of course in the details, the devil hides. Precisely in the Casentino area where in the first centuries of Christianity, there were monks who spent their lives to collect and write legends of saints, the devil appears. And even if this is no longer the case, we still feel mysterious presences in the woods surrounding the parish churches and castles of Casentino. Between these castles, that of Poppi maintains its romantic "aura": its mole imposes itself on the valley, is visible from all towns around and is the expression of the warrior spirit of its founders, the Guidi Counts, uncontested lords of Casentino until 1440, when the betrayal of one of them opened the road to the florentine possession. The castle bears the signature of the famous family of architects Di Cambio and is the "prototype" of Palazzo Vecchio in Florence. The existing walls and four ports (originally five) Â of the village were already constructed since about thirty years when, on 11 June 1289, they fought at Campaldino, in the plain below Poppi, one of the most important battles of the Middle Ages, to which participated also Dante Alighieri: Florence against Arezzo, i.e. Guelphs against the Ghibellines. Two things must be seen in the castle: the Rilliana Library full of 25 thousand antique volumes, manuscripts and incunabula; and the fourteenth-century cycle of frescoes attributed to Taddeo Gaddi, a pupil of Giotto.

Counts Guidi Castle
The Counts Guidi Castle of the village of Poppi, in Tuscany, dates back to 1191.
Piazza della Repubblica, 1, Poppi
Hermitage of Camaldoli
The Hermitage of Camaldoli is located near the village of Poppi, in Tuscany.
Strada Provinciale 124 dell'Eremo, 6, Poppi
Monastery of Camaldoli
The Monastery of Camaldoli is a monastic complex situated three kilometers from the Hermitage of ...
Località Camaldoli, 14, Poppi
The Ecomuseum of the Chestnut
The Ecomuseum of the Chestnut of Raggiolo articulated through a series of spaces, signs and diffu...

Strada comunale di Poggio di Loro, 61,, Loro Ciuffenna (Arezzo)
16.57 Kilometers from Poppi
Badia di Sant'Andrea
The Badia di Sant’Andrea is situated along the way that leads to San Clemente from the village of...

Piazza della Collegiata, 8, Lucignano (Arezzo)
50.75 Kilometers from Poppi
Cassero
In front of the formwork there is the Piazza delle Logge, in Lucignano

Via Rosini - 52046, Lucignano (Arezzo)
50.81 Kilometers from Poppi
Venturino Venturi Museum
The Museum Venturino Venturi is situated on the ground floor of Palazzo Comunale in the village o...

Via Taglieschi, 2, Anghiari (Arezzo)
31.31 Kilometers from Poppi
= distances as the crow flies

Via Magrete, 13, Poppi
Albergo Casentino
Casentino is a heap of suggestions and values in which humans and environment are still able to h...

Piazza Repubblica, 6 - 52014, Poppi
Parc Hotel
The best starting point to discover the wonders of the Casentino valley and breathe the air of th...

Loc. Torricella, 14 - 52014, Poppi
Borgo I Tre Baroni
Within the green heart of Tuscany, in the Casentino valley, I Tre Baroni is located in a great po...

Our news about Poppi

The ghost of the beautiful and terrible Matelda at Poppi Castle
The Castle of Conti Guidi in Poppi, in the province of Arezzo, is located on a very ancient rock, that appears on maps already in 1191. Today the ground floor of the castle hosts an historical museum in memorial of the battle of Campaldino of 1289 between the Guelphs Florentines and Ghibellines of Arezzo and boasts guests of the likes of Dante Alighieri and Taddeo Gaddi, a pupil of Giotto. But the most interesting parts of the building are the subterranea...
Continue
Petralia Soprana: the village of the Borghi autumn 2018
After the victory of the village of Ganci in 2014, of Montalbano Elicona in 2015 and Sambuca di Sicilia in 2016, the land of the Gattopardo, with a plush step, once again, climbs the podium peaks with another gem of the hinterland, winning with Petralia Soprana the title of Borgo dei Borghi autumn 2018. This edition of the Il Borgo dei Borghi competition, an autumn spin-off linked to the Kilimanjaro television program, began with three groups per ...
Continue
Unique Tuscan villages to Love - Download a free travel guide to the 51 certified Tuscan villages
It has recently been made available a free travel guide by Toscana Promozione Turistica, in Italian and English, about 51 Tuscan villages certified in the Borghi più Belli D'Italia, Paesi Bandiera Arancione, Mibact's Gioielli d'Italia and UNESCO World Heritage Sites. The volume, edited by Claudio Bacillieri, director in chief for Borghi Magazine, accompany th...
Continue