Share
Inside the Conero Regional Park is the village of Camerano. Called "the underground city", the village is known for the caves of the same name. The village, nestled among the harmonious hills of the park, surrounded by vineyards, is located in the territory of the well-known Rosso Conero. Every year, the first week of September, wine becomes the protagonist of the Rosso Conero festival: refreshment points, stalls, street games, tasting moments until late at night to celebrate all together. 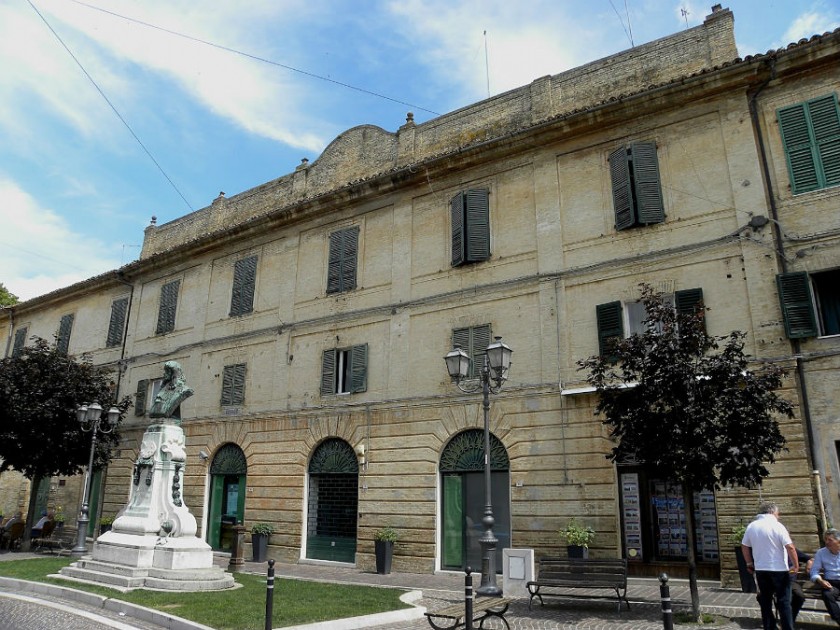 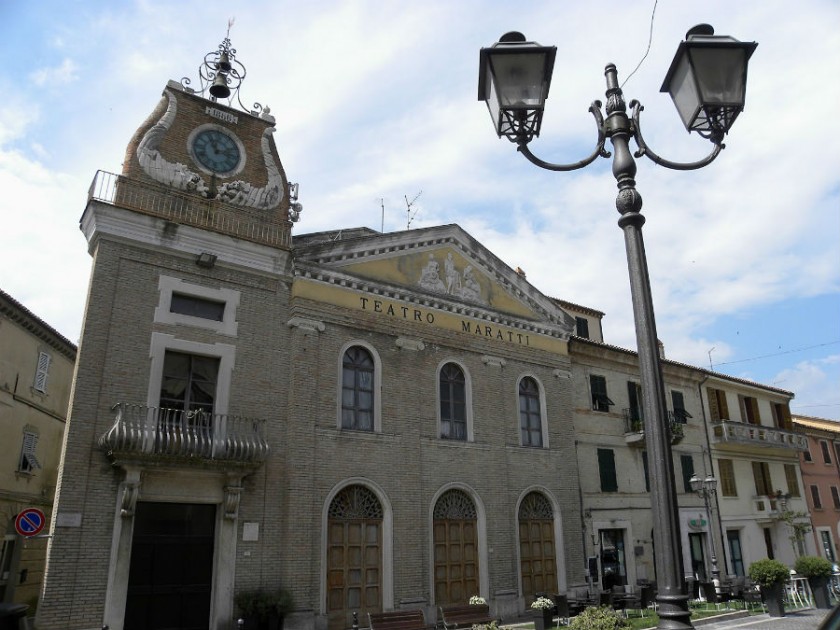 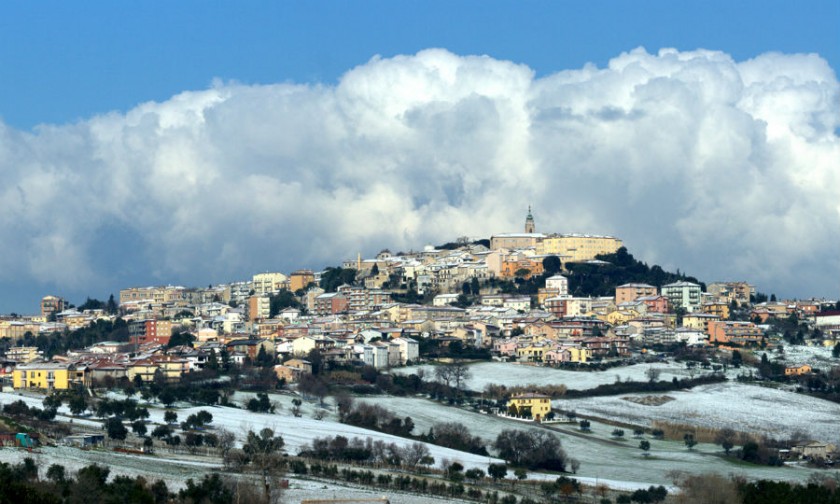 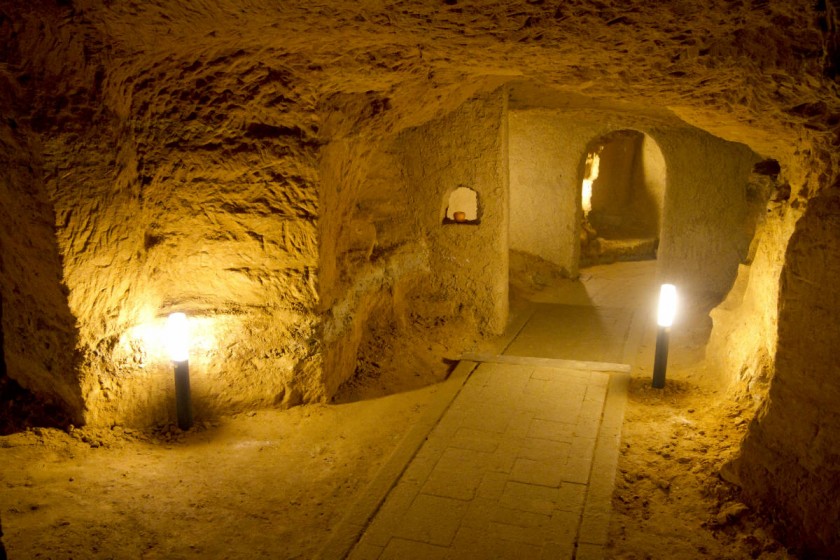 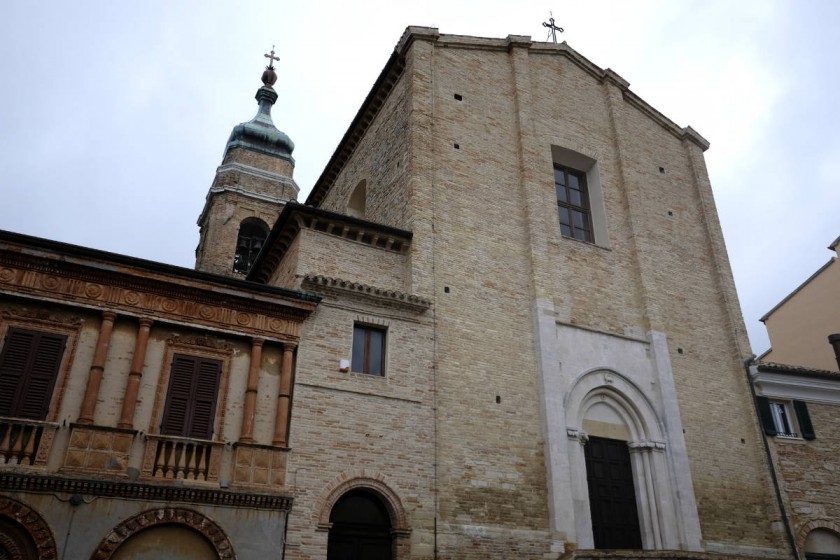 The village of Camerano is located within the Conero Regional Park, in the Marche region. Below the road level there is a real hamlet in the hamlet, called "Underground City" or "Grotte di Camerano", is dug into the sandstone and crosses the subsoil of the historic center with a labyrinthine course. For a long time it was thought that the numerous canyons were the rest of ancient sandstone caves or places to store wine. Explorations also revealed the presence in almost all environments of architectural embellishments, bas-reliefs and decorative details: dome domes, sailboats, barrels, circular rooms and columns of particular architectural taste, decorations with friezes, ornamental motifs and religious symbols constitute a of the constants of the entire path. There are also other hypogeans in Camerano, but outside the town. These additional tunnels, popularly called "devil holes", would be the remains of an ancient subterranean aqueduct that runs along the slopes of Mount Conero. This hypogeum has elements of similarity with other hypogea, such as those of Osimo and Orvieto.

The origin is still uncertain because of the lack of historical documentation; very is based on oral tradition, which suggests that "in Camerano ec is no more under and above", witnessing to the fact that there is the great planimetric development of the hypogeal path and that "the caves are ancient what is ancient country." The first prehistoric settlements outcropping in the area of building expansion of the village dates back to the epoch of the eneolithic (III millennium B.C.); between the end of the IX and the middle of the III century B.C. are instead dating back more than a hundred tombs picene placed in contrada S.Giovanni. All this would place, following the aforementioned oral tradition, the origin of the caves in a remote period. The tunnels dug at that time had to be very narrow and dug for practical reasons such as the conservation of food, the search for water, home safer and more alternative to the huts in surface. Currently nothing remains of that era, the caves visitable today are the result of modifications and additions carried out in the course of the centuries, from the Middle Ages to the first half of the twentieth century, until the end of the second world war. In addition to practical uses, the Caves in time were used as places of worship and meeting: witness are two churches hypogean located inside the path and of the salt with a circular plan and octagonal with friezes and religious symbols, linked to orders of warrior monks and hospitals. Another fundamental feature of the underground city is that protective, the subterranean passages allowed people to hide in case of sieges and threats. This not only in ancient times, also in 1944 the entire hypogean system was used as a refuge against the bombing for the population, who passed twenty days inside the caves.

During the Roman period the inhabited center was decreased by importance and the people were scattered abroad in the countryside, while, in the medieval period was manifested a rebirth of the same, which led to the current configuration of the historic center. The most ancient source medieval documentary that seems to relate to Camerano is that of "Code Bavaro" (Liber Traditionum Ecclesiae Ravennatis), in the second half of the X century, where reference is made to the convent of Santa Maria and Sant'Agata, inside of the diocese of Numana and that seemed to be located in Camerano in the area surrounding the present church of S. Francis. Other documentary sources important are two papal privileges in 1177 and 1183 where he is named the country as "Castro Camurani" , to recognize and then as a real medieval castrum. In 1198 Camerano appeared for the first time as an independent municipality and belonging to the alloy of municipalities created to counteract Marcovaldo Posted by Enrico VI.

Via San Francesco, 25, Sirolo (Ancona)
5.71 Kilometers from Camerano
Priors' Palace
The Priors' Palace is the municipal seat of the village of Montecassiano in Marche Region.

Largo XVII Settembre 1860, 1, Corinaldo (Ancona)
42.81 Kilometers from Camerano
The Piaggia
La Piaggia, situated in the heart of the village of Corinaldo, in the Marche Region, is one of th...

Find where to sleep in Camerano

Pontebovesecco - 60040, Genga (Ancona)
52.09 Kilometers from Camerano
Cupramontana-Accoglie
A tourist information centre that aims to be at the disposal of visitors who want to spend happy ...

60034, Cupramontana (Ancona)
36.39 Kilometers from Camerano
= distances as the crow flies

Travel proposals in Camerano and in its territory

1 night in a tent in the trees - from 145 €
Spend a night among the trees in Marche's largest protected area
| Travel proposal valid until: Tuesday 12 september 2023
2 days 1 night | Valid all year round | Max: 15 people

In Senigallia, from the summer of 2018, the hotel of Bo Bear welcomes with a vegetable garden by the sea. On the hills, a triumph of villages
A vegetable garden by the sea, where you can grow fruit and vegetables in the company of Bo Bear, on the beach of Senigallia and in the province of Ancona. This is the original initiative of the Hotel of Bo Bear, the first family hotel in the Marche region, a bright sequence of attractions for a relaxing holiday. And the Bo Bear beach, with its large play area, boasts six hundred meters of enclosed space, secured by two gates, to prevent child...
Continue
Ten seaside villages in the centre of Italy worth visiting during this summer
10 villages overlooking the sea, 10 rare pearls of our italian landscape, 10 locations that can not be missed during the year of the villages. Ok, we have a lot of pearls in Italy but today we want to show you just some we believe are really worth visiting during the summer on the central coasts of our country. 1. Our tour starts from Tuscany with the hamlet of Giglio Castello, a fraction of the Giglio Island which is located in the hig...
Continue
Ancona: a day through sea and hills
The picturesque village of Sirolo, overlooking one of the most beautiful stretches of sea of the Adriatic coast, the view over the Mount Conero, the suggestive underground Camerano and a good glass of Rosso Conero. In particularly clear days, you can glimpse the Croatian coast. The picturesque village of Sirolo gives the extraordinary pleasure of such a view. Situated in the south of Conero’s slopes, it overlooks one of the most beautif...
Continue