Church of the Holy Saviour

What to see in Proceno, Viterbo, Lazio 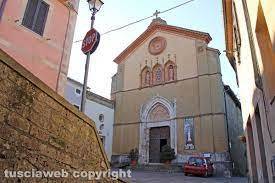 Proceno has within its territory a conspicuous number of churches. The main church of Proceno, where Holy Mass is still celebrated every Sunday, is the church of San Salvatore.

The date of its construction is not known precisely; it seems, in fact, that initially there was a tower in place of the current bell tower and that only later, probably after the birth of the fortress, did it become a church. It is built in the heart of the village, on a small square that joins three districts, Centro, Salaiolo and Poggio.

Over the centuries, the church of S.S. Salvatore has undergone various restoration works: the last intervention, of considerable importance, was carried out in 1919, after the famous earthquake that caused the vault to completely collapse. Inside, the church has a nave structure along the two sides leading to the altar; its marble floor was redone after the earthquake.

The lower part of the façade is in squared tuff and not plastered, the portal is formed by a Gothic travertine arch with terracotta lunettes depicting the Madonna with Child and angels.

Via Regina Elena, 21, Bomarzo (Viterbo)
45.50 Kilometers from Church of the Holy Saviour
B&B Il Grifo
The B&B "Il Grifo" is located in the historic center of Bomarzo, reachable only on foot, by bike ...

Piazza Pepe, 4, Bomarzo (Viterbo)
45.45 Kilometers from Church of the Holy Saviour
= distances as the crow flies