What to see in Caprarola, Viterbo, Lazio 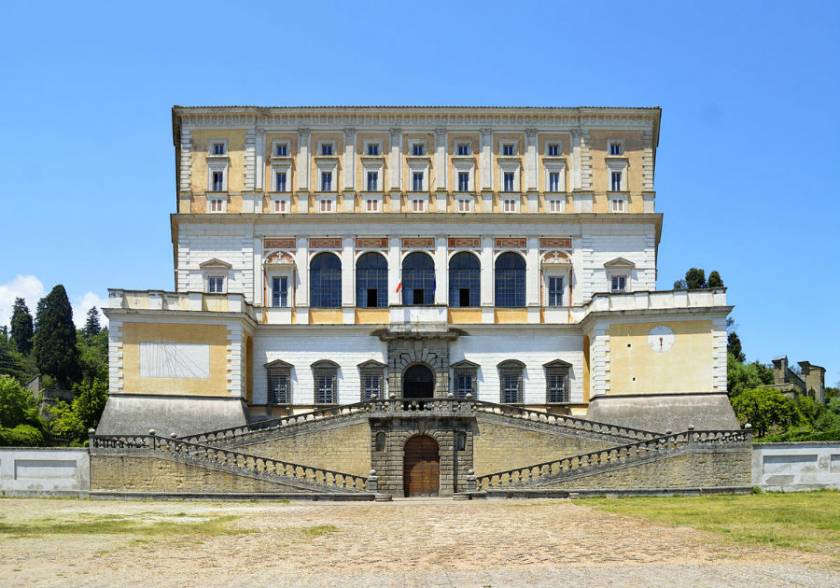 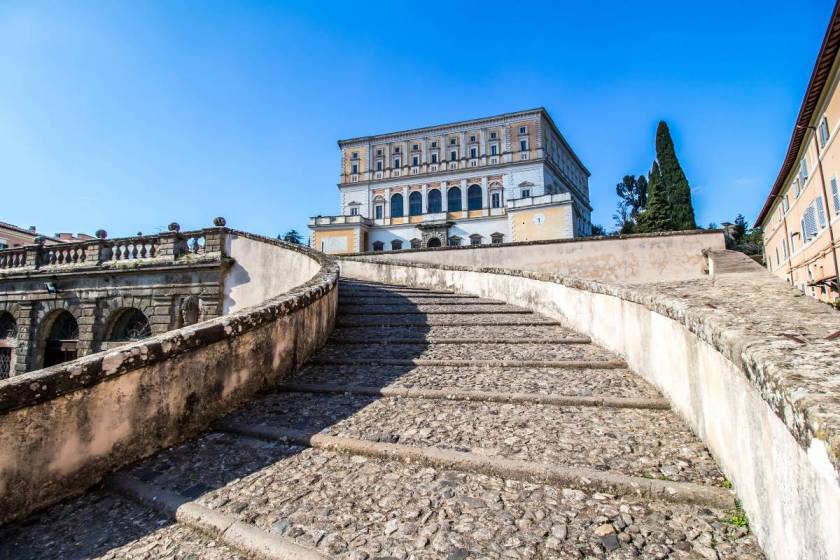 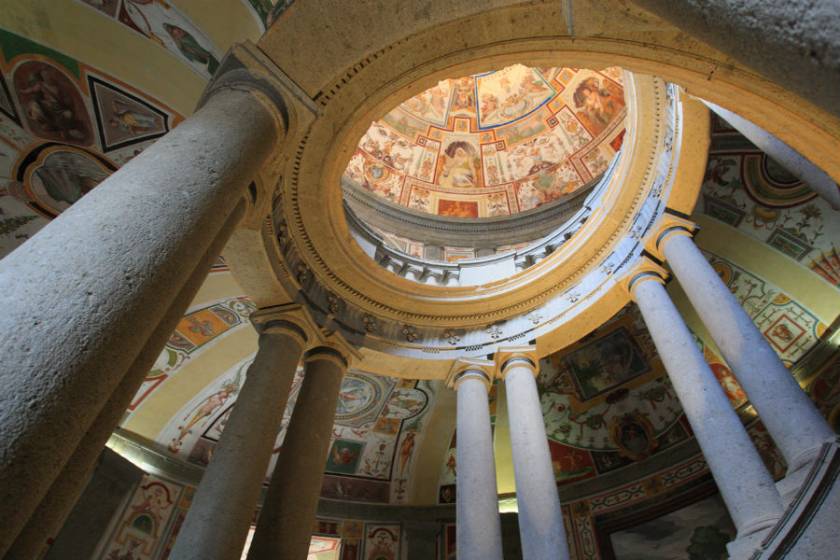 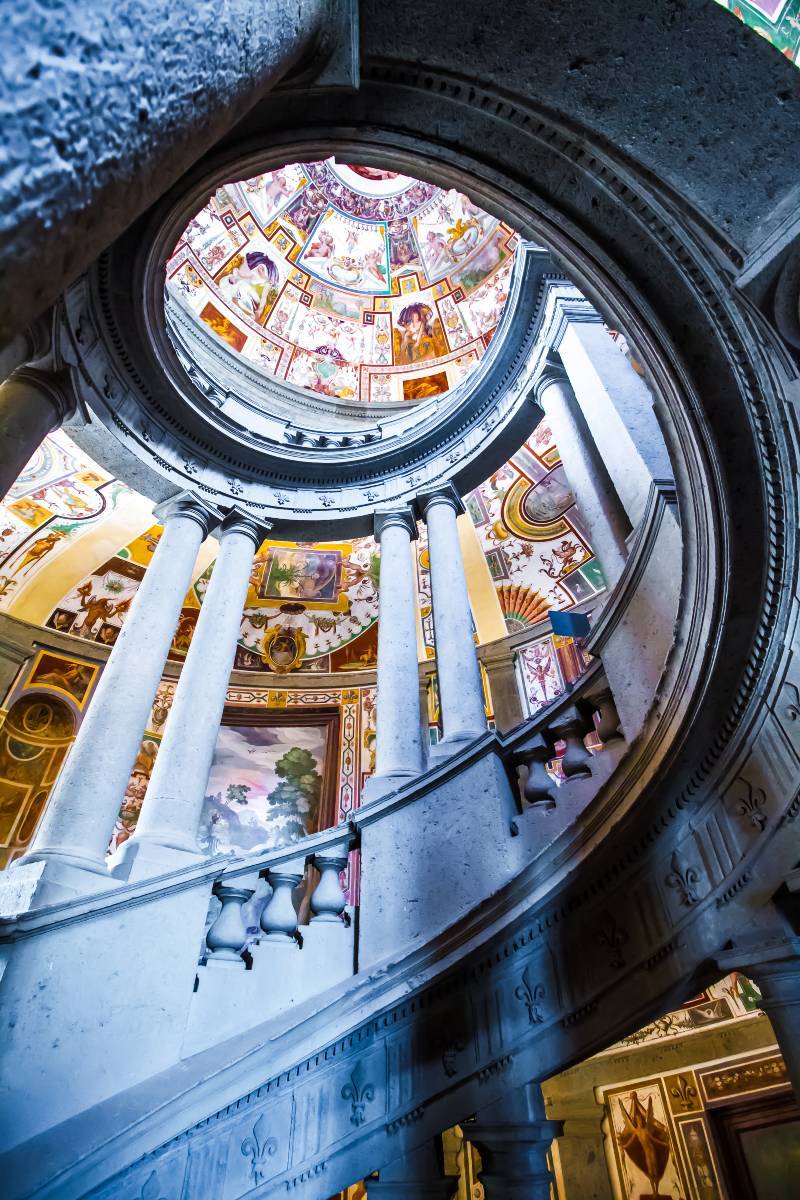 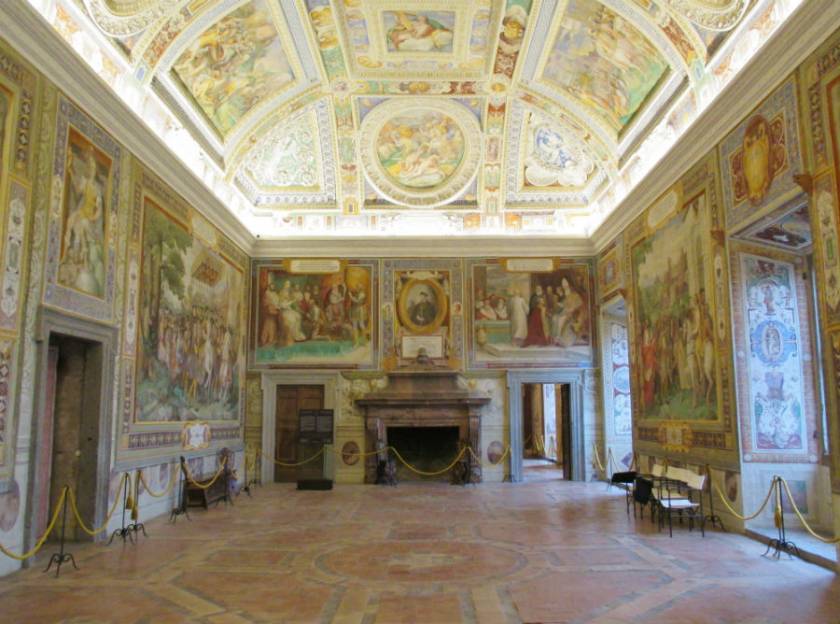 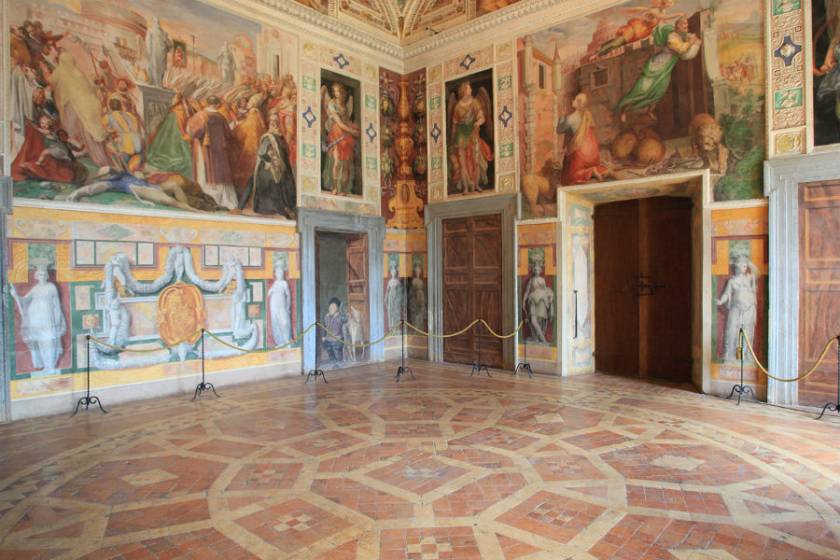 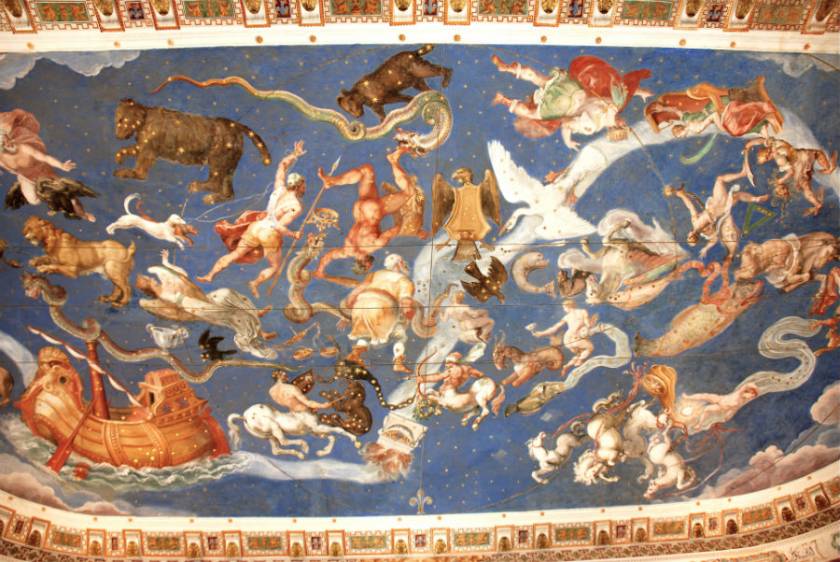 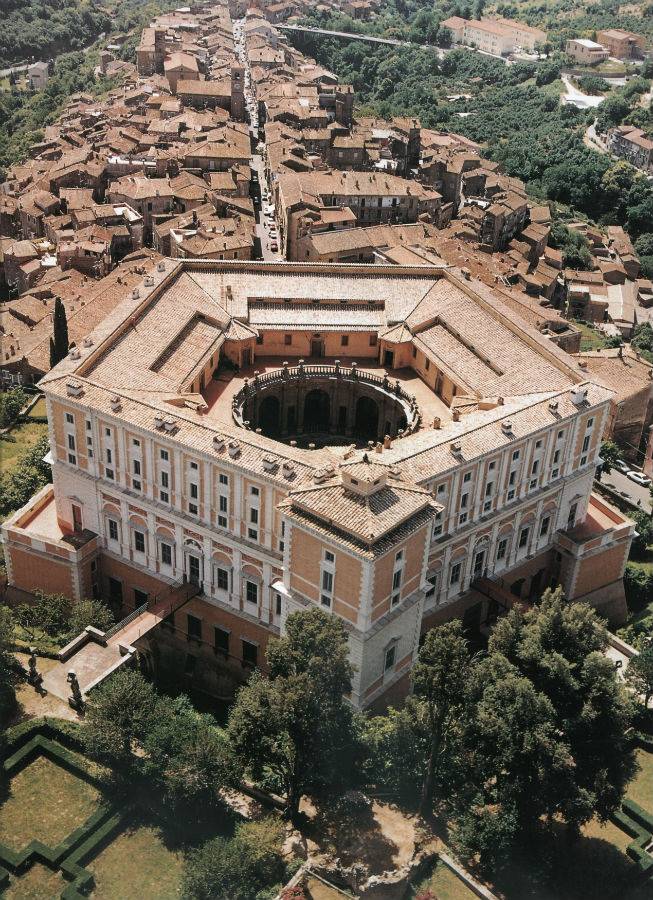 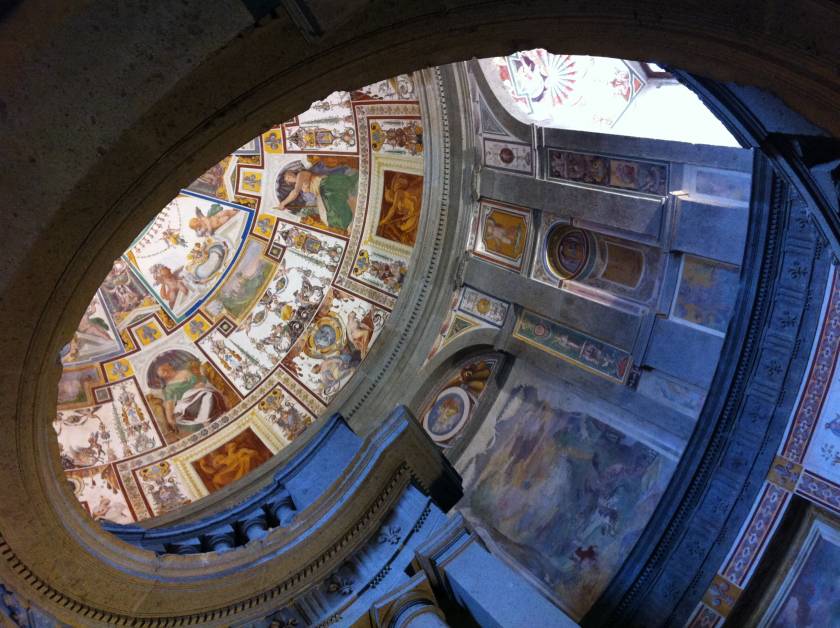 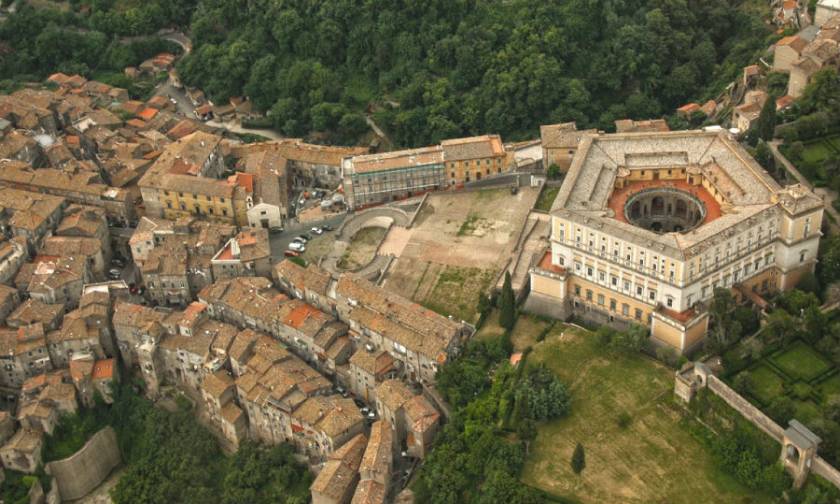 The Farnese Palace of Caprarola is one of the best examples of dwelling of the Mannerist era. The palace was one of the many noble palaces built by the Farnese in their domain. Initially had to have the defensive characteristics, as it was common in their stately homes in the territory of Latium between the XV and XVI century. The project for a fortified residence was initially entrusted to Antonio da Sangallo the Younger by cardinal Alessandro Farnese the old. Work began in 1530, but were suspended in 1546 due to the death of Sangallo. Thus, in 1547, the yard was entrusted to the Vignola that radically changed the original project. The construction, while maintaining the pentagonal plan of the original fortification was transformed into an imposing renaissance palace, which then became the summer residence of the Cardinal and his court. In place of the bastions of the corner the architect inserted of large terraces open onto the surrounding countryside, while in the middle of the residence was made a circular courtyard on two floors, with the superior slightly back. Vignola made to cut the hill with stairways so as to isolate the palace and, at the same time, integrate harmoniously with the surrounding territory; moreover was opened a straight road in the center of the village below, so as to visually connect the palace to the town and enhance its dominant position on the entire village.

Inside the sumptuous dwelling worked the best painters and architects of the time. The subjects of the frescoes were inspired by the scholar Annibal Caro and made by Taddeo Zuccari, then replaced, at his death (1566), by his brother Federico Zuccari, from Onofrio Panvinio and by Fulvio Orsini. The villa are attached the "Orti Farnesiani" (with the same name of the gardens of the family on the Palatine Hill in Rome), a splendid example of garden late-renaissance, realized through a system of terraces behind Villa, perched on the hill from which stands out the construction and connected by Vignola with the residence through bridges. The work was concluded only in 1630. The small building which is located within the gardens was chosen by Luigi Einaudi as a summer residence in seven years of his presidency of the Republic (1948-1955 she).

From the top you can admire its shape to pentagon with circular courtyard in the center. This courtyard was in the slope toward the center, where inside it was located a "Mouth of Truth" that gathered all the rain water that was used for each well in everyday use (wash, cooking etc..) The palace is framed by the road that widens in the square in front of the main facade (where is placed the entrance). Originally around was surrounded by a moat. The various environments are divided according to a precise scheme and modern: the summer zone to the north-east located where not banging around the sun, and that winter south-west, where was beating the sun. The areas of servitude were separated from the area of cardinal and were even formed by the thickness of the walls. Appended to the rooms of the servants were the kitchens and warehouses. In this area was housed the scale of the cartoccio, a ramp of helical shape which allowed to descend by a guide carved in the handrail, a foil of paper with inside sand or gravel, in such a way as to arrive quickly to lower floors confidential messages.

The mezzanine floor is called the plane of prelates. It can be accessed by both the outdoor staircase from the inside. In this plane there are rooms with frescoes by Taddeo Zuccari, the rooms of the seasons of Vignola and the room with the guards. The courtyard, reachable from these environments is of circular shape and made by Vignola. It is composed of two superimposed porticoes, with frescoed by Antonio Tempesta. The Vignola was also the author of the frescoes of the internal scale (Scale Regia). This wheel around 30 columns of peperino, through which, according to the legend, the cardinal spent on horseback to reach the piano nobile. Above the mezzanine is located on the piano nobile, whose summer zone was frescoed by Taddeo Zuccari, while the winter was painted by Jacopo Zanguidi (said Bertoja), by Raffaellino da Reggio and Giovanni de Vecchi. Here are located the bedroom of the cardinal, said chamber of the Aurora, and the room of the celebrities, said Room of the Fasti Farnesiani, with frescoes that summarize the life of the Farnese. In addition it is placed the antechamber of the Second Vatican Council, which takes its name from the fresco of the Council of Trent; in the same room there is a fresco of Paul III. Subsequently opens the Room of Hercules, which takes it too the name from the frescoes. One of the rooms which are more representative of the palace is the room of the geographical or of the globe, which takes its name from the frescoes by Giovanni Antonio da Varese. The fourth and fifth floor were assigned to staffieri and ai cavalieri.

Opening times:
From Tuesday to Sunday: 8.30 - 19.30. The ticket office closes at 18.45.
The park is open from Tuesday to Saturday from 8.30 to one hour before sunset, only in weather conditions favorable.
Free entrance on the first sunday of the month.

Via Regina Elena, 21, Bomarzo (Viterbo)
18.14 Kilometers from
B&B Il Grifo
The B&B "Il Grifo" is located in the historic center of Bomarzo, reachable only on foot, by bike ...

Piazza Pepe, 4, Bomarzo (Viterbo)
18.21 Kilometers from
B&B Il Grifo
The B&B "Il Grifo" is located in the historic center of Bomarzo, reachable only on foot, by bike ...