Sanctuary of Our Lady of Angel 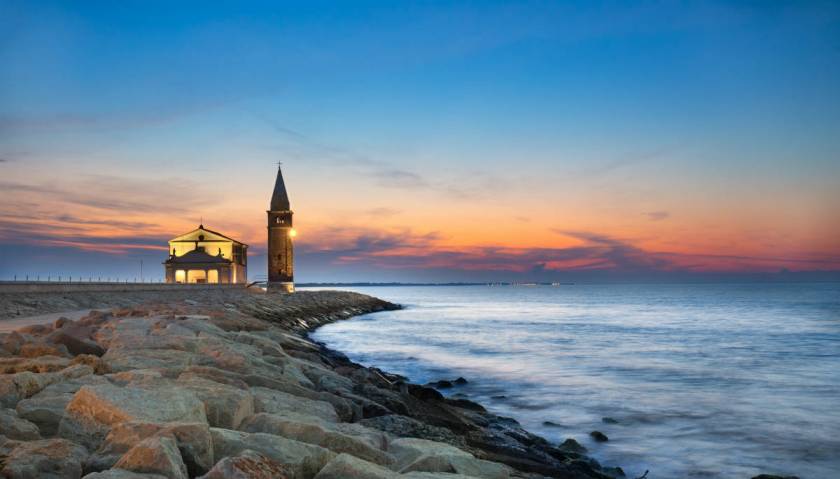 the Sanctuary of Our Lady of Angel is a church of Caorle, rebuilt in its present form in the XVIII century on the shore of the Adriatic Sea. The first construction of the church of the Angelo is attributed to the first trasmigrazioni of concordiesi toward the coastal territories, as a result of the barbarian invasions of the territories of the hinterland. This makes the sanctuary on the first sacred building built in the town of Roman foundation. The first construction was a basilican plan, with three naves, of which one constantly threatened by the force of the sea; in the XVII century the church was only two naves separated by four pillars and five arches.

In the ancient temple is the statue of the Virgin was placed in a niche above the main altar, and protected by a glass sheet, sitting on a throne of gilded wood while two angels of wood to the sides supported the veil. Behind the altar was placed a small sacristy, which is accessed by two doors above each of which was placed a painting of angels. In the central nave was placed a cross in marble, testimony of the consecration of the Church, which occurred at work of Bishop Daniele De Rossi on 7 January 1523; the cross, today preserved, is now placed on the outer wall behind the sanctuary. In the single-side nave remained was placed a wooden altar dedicated to Saint Francis of Assisi, on which was placed a statue of the saint. Moreover were hung on the wall paintings of Santa Marta and San Valentino. The church was free of input ports; was closed externally by a gate, which allowed him to all the faithful to see the statue of the Virgin both day and night; the facade was built by a portico in wood where they were placed some marble tombs.

Via Colombera, 4/a, Quarto d'Altino (Venezia)
41.02 Kilometers from Sanctuary of Our Lady of Angel
Borgo Cà dei Sospiri
Borgo Ca' dei Sospiri, an ancient villa renovated and designed to welcome you and make you feel a...

Viale della Resistenza 18/20, Quarto d'Altino (Venezia)
41.19 Kilometers from Sanctuary of Our Lady of Angel
= distances as the crow flies