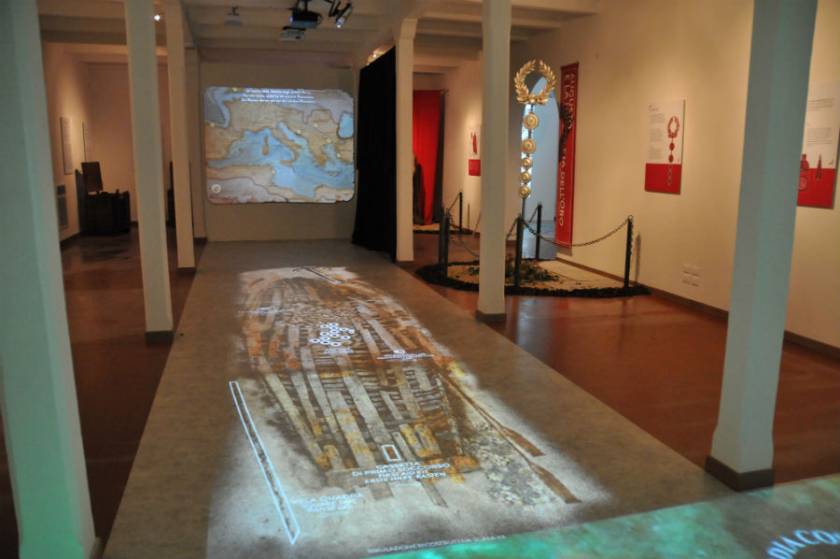 the National Museum of Sea Archeology of Caorle hosts an ancient roman ship (Caprulae ferax) of the II century a.C., known as "Caorle 1", founded in 1992 by four Pordenone divers off the Caorle coast. During the diving campaigns of 1992/93, 1994 and 1995/96 are found amphorae of wine of type "Lamboglia 2", two millstones (of which a complete the top call "catillus"), tableware (husks, jugs and cups), strains of still in the lead. Are also found small cannons and ceramic fragments and medieval, in June 1998, a fragment Renaissance architectural.

In November 1995 is discovered the wreck of the brigantine french-italico "Mercury" (Mercure), a military vessel of the XIX century ("Caorle II", found between Coarle and Eraclea): the hull in copper (40x10 meters) and the shell are in excellent state conservative. The next spring are found of cannonballs in iron, to witness to the sinking of the boat that took place on 22 February 1812 during the battle of degree.

The museum is located inside the buildings constructed at the beginning of the twentieth century on behalf of Cavalier Ugo Trevisanato and forming part of the former farm Chiggiato, in the locality of Sansonessa, ports of Caorle. On the first floor of the museum is placed the permanent exhibition "TerredAcque", where are exposed the archaeological finds (coming from the former Museo civico caprulano) of the protohistoric village of San Gaetano, of "Portus Reatinum" mentioned by Pliny the Elder, of the ancient city of Caprulae, up to the testimonies of medieval and modern. On the ground floor there is an exhibition space for temporary exhibitions. In the outer courtyard there is a tent structure that hosts a lugger, typical boat similar to craft Latin and medieval.

Via Colombera, 4/a, Quarto d'Altino (Venezia)
39.85 Kilometers from National Museum of Sea Archeology
Borgo Cà dei Sospiri
Borgo Ca' dei Sospiri, an ancient villa renovated and designed to welcome you and make you feel a...