What to see in Grottaglie, Taranto, Apulia, Salento 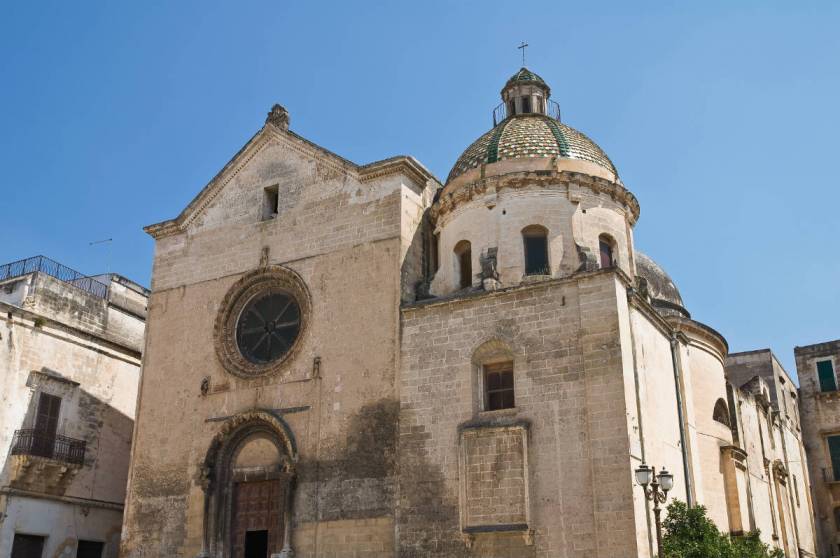 erected in 1372 by Archbishop Giacomo d'Atri, the Mother Church is the work of the architect Domenico di Martina, as reads the inscription placed on the facade.

Made in late Romanesque style, is probably an extension of an existing building. On the facade opens an oculus on whose periphery is carved a weave of plant motifs; with the bas-reliefs depicting Christ on the throne, the Archangel Gabriel and the Virgin. Under the porch, characterized by an elaborate notch with acanthus leaves and governed by two pedestals octagonal resting on oxen supported by brackets, opens the portal also enriched by a fine weave of reasons of plants and animals.

Via Leone XIII, 21,
Re Sole Resort & SPA
Located halfway between Salento and the Gulf of Taranto, more precisely in Grottaglie, Re Sole Re...

Via Mannara, 57,
Antica Oria
In the heart of Salento, in the medieval village of Oria, Antica Oria is a complex of 3 apartment...

C.da Galante - 72017, Ostuni (Brindisi)
18.72 Kilometers from
Lena Boutique Resort - Suite & Spa
In the heart of Salento, in Oria, Villa Lena is an extraordinary extra-luxury villa with up to 14...

Contrada Cervarolo, Ostuni (Brindisi)
20.40 Kilometers from
Il Casolare Degli Ulivi
A lovely guesthouse located in Oria, in the historical heart of the city in the countryside area....

Condrada minicardo, 72024, Oria (Brindisi)
21.22 Kilometers from
PiGreco Charming Trullo
The PiGreco Trullo is a charming bed & breakfast in the beautiful village of Ostuni

Trumpets' Feast in honor of SS. Peter and Paul