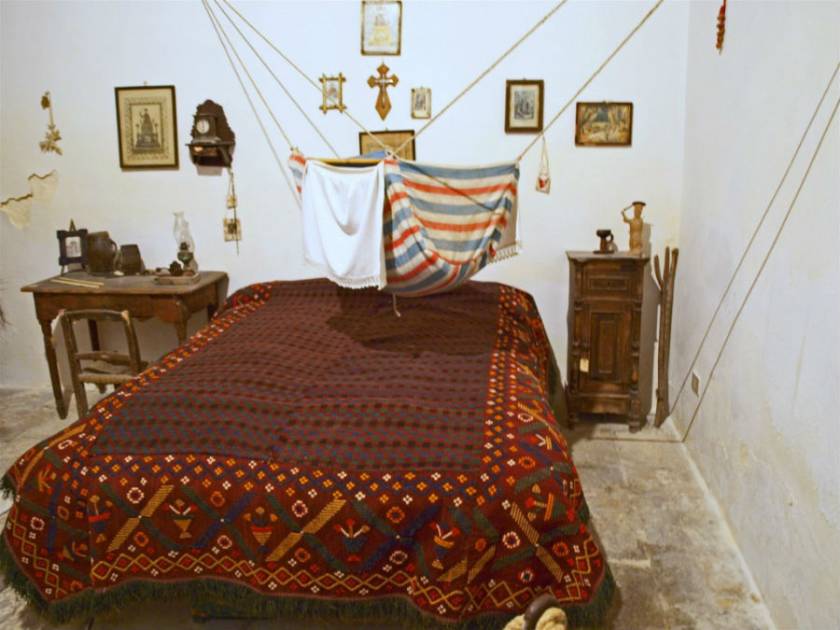 Antonino Uccello, the creator of the House Museum, was a poet and anthropologist. Was born in CANICATTINI BAGNI (SR) in 1922. Just twenty, teacher of primary school, went in Brianza; here, away from his Island, appassionò folklore and popular traditions. Aware of the rapid social changes, economic and productive triggered in Sicily from the postwar period, is activated, initially during his holidays, together with his wife Anna Caligiore, in many research campaigns.

Its purpose was to acquire and document everything that was linked to the culture of the people in his territory: uses, traditions, objects and costumes, music, tales, testimonies, images. Since 1957, for about 30 years, organized between Sicily and Milan many exhibitions on popular culture. Returning definitively in Sicily, he felt the need to find a tabernacle for the collected material; buy, thus, an ancient house in Palazzolo Acreide, creating the House Museum was inaugurated on 26 September 1971 and which today bears his name. Uccello conceived of his home as an anti-museum: a house of peasant civilisation, usufruita as a social service. And so was managed until 29 October 1979, the date of his death. Away from the desire to create a museum of memories or of nostalgia, Uccello concentrated its attention in the staging environments strongly contextualized, capable of indicating to the visitor the function of the use of the foregoing. He took care of the versatility of some exhibition spaces used as places where circulate temporary exhibitions of different testimonies of popular world, sometimes by calling to their aesthetic value and artistic, sometimes proposing readings of their most hidden symbolic meanings and communicative. The House Museum was acquired in 1983 by the Sicilian Region and in the current layout offers to the visitor, with a strict respect of the will of its founder, the original arrangement.

Atrium. The entrance of the house museum presents an exhibition place aimed at creating in the visitor an immediate suggestion plastic chromatic and: the walls is connected a collection of ceramic plates (fiancotta), coming mainly from Caltagirone (Catania). Around it there are stone sculptures depicting angels, flowers, pedestals and other representations of portals,shelves of balconies and tomb furnishings. In a niche in the wall are exposed numerous of daily use. A gig finds space next to a railing that defines the access to a local already used as a cowshed.

The courtyard. Has an external staircase to the access to the upper floor. In a corner you will find the cistern to collect rainwater, which were conveyed from the roofs with tiles (ciaramira) gutters. It is a tool of iron (curchera) with a series of hooks arranged around a circle, used to be able to retrieve the bucket at the bottom of the pit.

Home massaria ri. Was the kitchen and the work room of the massaro. Behind the access door are arranged the images of the patron saints, a small cross palm leaf braided benedetta in day of Palm Sunday and a horseshoe with a red bow against the evil eye. In a corner is located the furnace of stone and bricks without flue (a fumu PERSU), so that the smoke is leaked into the room and went to smoke the sausage hanging by a wooden circle hooked to the ceiling. On the wall of the oven there is a small opening with a plug of stone, to observe the baking of bread; to the side of the furnace a hearth of stone (tannura) for cucinar. Follows the angle with the occorrent to make the ricotta cheese: the boiler (quarara) suspended from a ceiling beam of wood supported by two tripod; an average (mastredda) worked for draining even of cheeses and many small containers of barrel (cavagni), where the ricotta was deposited. In the thickness of an ancient walled up window a space is provided with brackets that support numerous earthenware containers; in the adjacent corner you will find the tools for the baking industry. Hanging from the ceiling, hung to long axs are aligned collars from bovine animals. In another corner of the room is located the frame with which the housewife weaved she his outfit, woolen blankets and cotton (frazzate), the saddlebags, the modest filunnenti (wire from nothing) for estrofinacci crockery and anything else needed to need family.

Home ri stari. Was the rent (for stay) where lived the spouses Massari. There is a double bed on which it is suspended, bonded to two bushings screwed up in contiguous walls, the naca to buolu (cradle on flight). At the bedside, around the crucified, are hung prints of saints. in the corner is a container of woven cane of cylindrical shape (cannizzo) where it is preserved, sheltered from rodents and from moisture, wheat for the vintage. The parties there are baskets made with stalks of wheat (canniscia) and sieves for flour (criva the Sita); there are also a niche with a statue of San Sebastiano, with around images devote; a blade of Easter and two bunches of wheat braided, connected with propitiatory function. Follow in the wall old family photographs exhibited according to an order strictly hierarchical; below there is located a table to crescent on which are placed objects of domestic use. In an area opposite to the bed you open two compartments a wall in which are preserved the receptacles, Brocchi molds and terracotta for the package from the jam. Complement the environment a brazier of copper, Chairs, chests for the laundry, musical instruments, a child seat for children and furnishings for family use.

The stable. It is a small room with a barrel vault and floor of natural rock. In a corner at the entrance on the right you find a manger; the walls are hung with some harnesses for the harness of the animals. The stable contains all the tools of the massaro with which brought to fulfilment the cycle of agricultural work: Falco, plows, a harrow, hoes, plowshares, sticks, blades, thimbles cane. Hung to long axs hanging from the ceiling, are aligned collars in wood for sheep and cattle, some of whom have ornamental motici figurative and engraved and paintings.

The crusher. Was the local (trappitu) used for the production of olive oil. The vertical mill in stone (Mola suprana or currituri) went, dragged by a mule blindfolded, on horizontal mill (Mola suttana), crushing the olives that mastru of blade (Master of blade ammucchiava) on it. With the pulp produced the mastru cuonsu ri (Maestro del Torchio) filled fiscoli (coffi), dried vegetable fiber, that you had under the wooden winepress hand operated with a beam. The pressure produced was overflowing oil mixed with water that scolava inside a circular stacker in lava stone (lumera), bordered to the outflow of the liquid. Through a short mouth it was conveyed in settling tanks dug into the rock where, for specific weight lower than that of the water, oil floated and was collected manually with a zinc plate or terracotta (lumera), with two lips to spout, for then be poured into the various containers. In front of the winepress there are two masonry tanks said dead (death) where you flush the waste water from which it is obtained an oily liquid food for the lamps and for the production of soap. In a corner you will find the press used for machining of honey. Was operated manually to the squeezing of the combs specially arranged in coffee and from which was already drained honey of first quality. The pressing made honey of second choice and useful material for the production of wax which was then sold to the workshops of wax modellers (cirari) for the production of candles, figures of pastors, holy figures.

Small maiazzè. Served as a deposit (small warehouse) of jars - colegate currently in the mill - in which preserved the oil. Hosts a barn, inside which, in a first compartment, is exposed in the crib popular recently invoice, in crete sun baked and papier: the landscape with characteristic dry walls and the typical masserie, represents the campaign of the Iblei mountains. In the second compartment are located a nativity scene with figurines of terracotta coming from Catania and some ceroplastiche. In other exhibition spaces there are some teche with inside the figurines of the wax. The parties are hung paintings on glass production in the nineteenth century, with religious subjects.

The courtyard. Inside the small of small maiazzé there is a portico with a round arch adjacent to another courtyard with access secondary wing house and a staircase that leads to the upper floor. In this space is placed a drinking trough for animals (scifo). Through a window overlooking the portico one sees a second tank of rain water used for the crusher.

Maiazzé. It is the ancient manor magazine where were preserved food and the collection of vintage : on the bottom there are large closets of wood for wheat and legumes, now used as exhibition spaces. Currently the local hosts temporary exhibitions of objects and collections from the magazines of the House Museum. Paintings on glass, ceroplastiche, ceramics, tools for work, traditional costumes, jewelry, musical instruments, furnishings, images devote, sacred objects, crucifixes, toys, ex-voto, wooden sculptures, votive tablets, means of transport: are exposed alternately in the old warehouse.

Former stables. The room was used in the past as a stable; the cobblestones that constitutes the actual floor, presumably in front of the earthquake of 1693, was discovered during a recent restoration. In it are exposed a collection of puppets, mostly coming from Palermo, billboards for the popular theater, details of carretto wooden and wrought iron and tin toys.

In addition to the offices, is located the exhibition warehouse, where they have space objects collected by Uccello and are not placed firmly in the underlying environments as well as new acquisitions made by the Region of Sicily after 1983. Are the premises where bird lived until the day of his scompara, with his family.