Cathedral of the Most Holy Savior

What to see in Montalcino, Siena, Tuscany 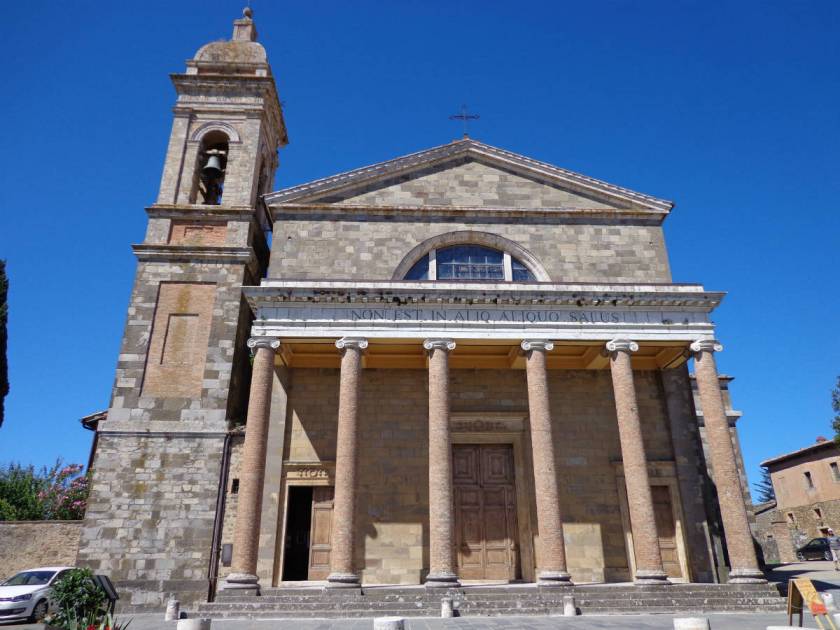 the first place of worship in Montalcino dedicated to the Most Holy Savior was the homonymous romanesque parish church, dating back to the XI century; it was elevated to the cathedral of the diocese of Montalcino when the latter was founded on 13 July 1462 by order of Pope Pius II. The old church was demolished at the beginning of the XIX century and which was completely rebuilt in neoclassical style on a design of the Sienese architect Agostino Fantastici. The construction beginningò in 1818 and finì in 1832; the cathedral was consecrated in 1844 by Bishop Paul Bertolozzi on April 24.

outside is characterized by a facade, preceded by a high pronaos, devoid of the eardrum; at the center of the high marble cornice, supported by six Ionic columns with brick capitals in marble, is the following inscription in Latin language:

NON EST IN ALIQUO ALIO SALUS
(In no other there's salvation)

inside the Cathedral is integrally in neoclassical style; it is characterized by the presence of a double transept: the first, the east one is place adjacent to the wall of the inner facade, and on it will open the three portals; the second, instead, is located in its usual position, Between the apse and the house. Each of the two end walls of the eastern transept hosts an altar: the right is dedicated to the Immaculate Conception and hosts the blade of Francesco Vanni Immaculate Conception with Jesus and God the Father (1588); the left is surmounted also from painting of Vanni, St John the Baptist in the desert, dating back to the eighties of the XVI century. The house is divided into three naves by two high ionic colonnades with four columns each: the central nave is covered with barrel vault in cassettonata part, while the lateral ones have ceiling plan; moreover, in the terminal part of the nave, within two niches, there are the plaster statues of San Michele Arcangelo (left wall) and San Giovanni Evangelista (right), made by Antonio Rossi in 1842.

The presbytery, closed at the front by a baluster unfolds under the transept west; at the center there è the monumental altar, realized between 1828 and 1832 on a design by Agostino Fantastici which, in the course of the work, simplified the manufactured article. At the center of the composition, above the canteen, there è the tabernacle, inserted in the center of the facade of an ideal ionic temple with a triangular tympanum supported by four columns and decorated with a bas-relief depicting the Lamb of God. More on top, there are four decorative elements, arranged in pairs at the extremities of the altar: down two angels holding candelabrums also, top two candelabra with more lights. In the center, there are two angels holding the cross of Christ Risen. To the left of the altar, find place the wooden chair of the bishop, built between the XVI and the XVII century. In the semicircular apse, that opens up behind the high altar and is illuminated by a window to the lunette there è are the stalls nineteenth-century wooden choir, reserved to the canons.

on the chancel in the left arm of the western transept, is located the organ Nicomede Agati opus 453, built in 1858. The instrument is a transmission entirely mechanical suspended and is located within a niche with case in masonry at the center of which there è the exhibition, composed of 35 barrels of main arranged in single cusp with lateral wings, with mouths mitre to trend opposite to that of the hilltop of the barrels. The Console is a window and has a single keyboard 56 notes with first chromatic octave extended not original division (bass/Soprani to FA3/Fa#3), and pedals straight not original 18 notes, constantly joined to manual. The registers are operated from handcuffs to lateral sliding placed on two rows to the right of the keyboard.

Piazza Rosa Tiberi Guarnieri Carducci, 18, Castel del Piano (Grosseto)
18.76 Kilometers from Cathedral of the Most Holy Savior
Lupaia
An agritourism resort in the heart of Tuscany, between Pienza Montepulciano. La Lupaia is a luxur...

Via Berignano, 76 - 53037, San Gimignano (Siena)
58.00 Kilometers from Cathedral of the Most Holy Savior
Lupaia
An agritourism resort in the heart of Tuscany, between Pienza Montepulciano. La Lupaia is a luxur...

loc. Santa Margherita, 34 , San Gimignano (Siena)
59.35 Kilometers from Cathedral of the Most Holy Savior
Azienda Agricola Teruzzi & Puthod
The Teruzzi&Puthod Winery is located in the hills of San Gimignano, in Tuscany.

Località Casale, 19, San Gimignano (Siena)
59.84 Kilometers from Cathedral of the Most Holy Savior
= distances as the crow flies