What to see in Stintino, Sassari, Sardinia 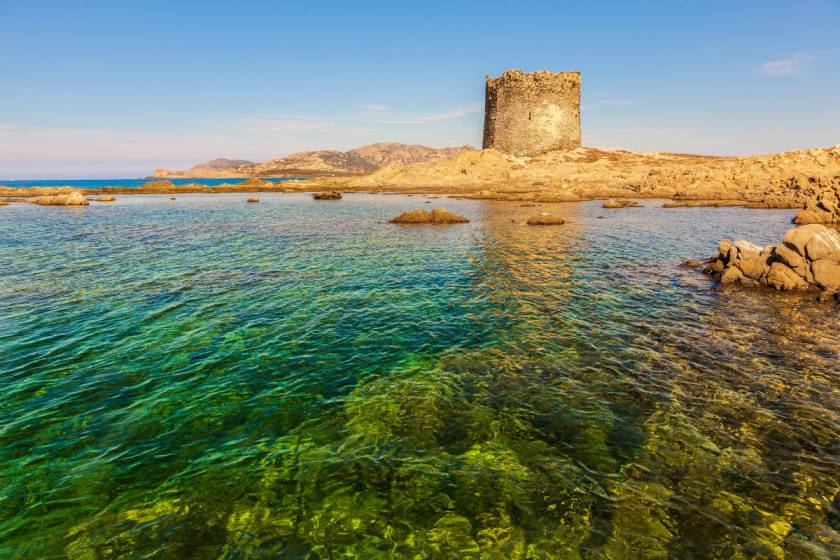 the Pelosa Tower is a tower that is part of the complex of fortified structures that, from the Middle Ages until the middle of the nineteenth century, have constituted the defensive system of sighting and communication from the coastline of Sardinia. It is situated on an islet placed between the Piana Island and Capo Falcone just inside the entrance of the strait of Asinara, strategic position for traffic control of the boats that "from the outside sea" is directed toward the low and sandy coast of the Gulf of Asinara, violabile easily in the event of attack on the riparian community in the area. Is in visual contact with the towers of the Piana Island and Capo Falcone.

The Tower takes its name from the nearby beach originally called "Sa palosa", probably due to the presence of straw marina (algae) that there is deposited in abundance. It is built with the stone of the area, shale, and is located at a height of three meters s.l.m.m. The hatch is located six meters from the ground and, as for most of the coastal towers of Sardinia, access to the tower took place with the aid of stairs in rope or pins that, in the event of danger could be retracted with ease.

The room has once a fungus supported by a central pillar and is divided into three compartments, each of them equipped with slit; to the left of the hatchway, formed inside the perimeter wall, there is a narrow and steep staircase thanks to which you have access to the terrace or Piazza d'Armi. Above the terrace was present the so-called "Mezzaluna", a lightweight structure from the shape of a semicircle made of Coppi and reeds, who rested on the parapet, made to give shelter to the soldiers and munitions.

The Pelosa tower was built with certainty before 1578, date on which, in a document signed by the viceroy de Moncada, there is already talk of the need to intervene for repairs. Other documents show that the typology of the tower was of the type de armas or gagliarda, i.e. heavy defense and that the garrison in garrison was formed by the master, the alcaide, a gunner and three or four soldiers which had at their disposal an armament composed of three large-caliber cannons, a spingarda and some rifles.

The tower was abandoned in 1846, four years after the abolition of the real administration of the towers, the Institute who ran the defensive system coastline of the island.

Viale I Maggio, Alghero (Sassari)
43.84 Kilometers from Pelosa Tower
Bajaloglia Resort
An oasis of wellbeing and relaxation, where the scent of the Mediterranean vegetation will inebri...