What to see in La Maddalena, Sassari, Sardinia 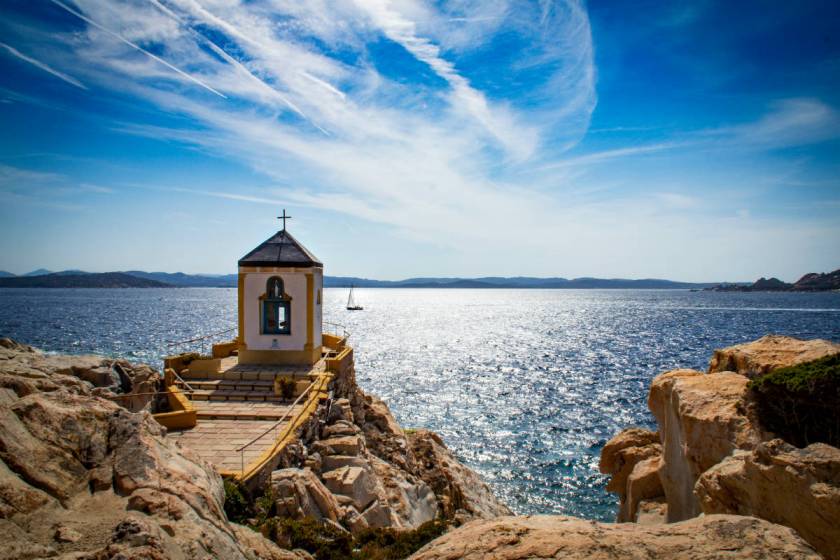 The small Cappella della Madonnetta is located in one of the most beautiful and evocative places of the Maddalena Archipelago. Clinging to a granite boulder overlooking the sea, it is still today half of the faithful devotees to the small statue of Mary, savior of the dangers of the sea.

The story tells that a lobster fisherman, Michele Scotto called "zi Cristu", caught with his boat by a terrible storm found shelter and safety in the small granite coast.Having escaped the shipwreck, he wanted to place a small statue of Mary for his own salvation and that of the crew in a niche, as thanks to the Madonna.
The inhabitants of the island, in particular the fishermen, with the years they became more and more devoted to the "Madonnetta", so that the place became more and more a destination of pilgrimages.

In 1928 the small Chapel was built, restored several times due to continuous marine corrosion.

Every year on May 1st the feast is celebrated with the Holy Mass and procession dedicated to the Madonna.

Loc. Nido D’Aquila snc - 07024, La Maddalena
B&B Gianella
This bed & breakfast is located in the village of Aggius, in the province of Olbia-Tempio, Sardinia.

Via Brigata Sassari, 12, Aggius (Sassari)
42.81 Kilometers from Chapel of the Madonnetta
Hotel Oasis
A beautiful residence located along the Alghero-Fertilia coastline, a few kilometers from the air...

Viale I Maggio, Alghero (Sassari)
115.77 Kilometers from Chapel of the Madonnetta
Bajaloglia Resort
An oasis of wellbeing and relaxation, where the scent of the Mediterranean vegetation will inebri...

Località Bajaloglia - 07031 , Castelsardo (Sassari)
68.69 Kilometers from Chapel of the Madonnetta
Castelsardo Domus Beach
It is the ideal place to relax alone, as a couple or with the whole family.

Corso Italia, 38 - Lu Bagnu, Castelsardo (Sassari)
70.14 Kilometers from Chapel of the Madonnetta
PH Hotel
A prestigious destination for relaxation, family, fun, business and any other of your special eve...

Corso Italia, 143 - 07031, Castelsardo (Sassari)
70.29 Kilometers from Chapel of the Madonnetta
Farmhouse La Genziana
La Genziana is a beautiful farmhouse located a stone's throw from Alghero airport. An oasis of pe...