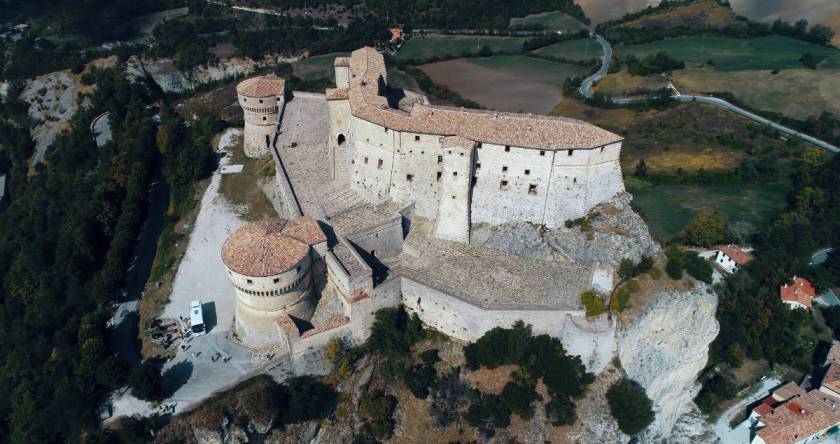 a first fortification on the top of the Mount was built by the Romans. In the Middle Ages it was fiercely fought over by the Byzantines, Goths, Franks and the Lombards. In the second half of the Fourteenth Century the Malatesti succeeded to storm the rocca, alternating in the domain to the Montefeltro until the middle of the Fifteenth Century. In 1441 the young Federico da Montefeltro was the author of an enterprising climb of the strong. The new structure allowed a dynamic counter-offensive, ensuring directions of shot crossed. To ensure this condition sides of the fortress were equipped with artillery and access roads were made not reachable from enemy fire thanks to military outposts. Until the devolution to the Papal State of the duchy of Urbino, in 1631, San Leo belonged from 1527 to Della Rovere. Currently the environments of the fortress houses a museum of arms and an art gallery.

In the fortress there are two parts quite distinct: the donjon, which with its torricini square and the Gothic Input is the most ancient and the residential wing, the round towers and the muraglione keel with corbels that connects them, bill more recently. The two towers of the boundary walls and the donjon delimit the so-called Piazza d'Armi. The area is scattered with rocky peaks that rise up coming to sea walls more steep. On each of these peaks a fortress or the ruins of a fortress recall a past tumultuous; while the ancient parishes mitigate the proud look of valleys and hills. The visitor who comes from Romagna plain the city-fortress is schermita from his huge shield of rock high and polished. Who descends from the mountains it appears as the ship by the high bow to the east with the bell tower similar to the mainmast and with his handful of houses unequal and piles.

Via Ca' Giorgetto, Località Calmugnano, Frontino (Pesaro e Urbino)
13.86 Kilometers from Fort of San Leo
Il Poggianino
In the splendid setting of the Marecchia Valley, in the heart of the spectacular Romagna hinterla...

Via Santa Maria, 2, Longiano (Forli Cesena)
19.52 Kilometers from Fort of San Leo
Agriturismo Il Sentiero
Located in the middle of the hills of Montefiore Conca.

Via Gemmano, 1050 - 47834, Montefiore Conca (Rimini)
20.66 Kilometers from Fort of San Leo
Il Poggianino
In the splendid setting of the Marecchia Valley, in the heart of the spectacular Romagna hinterla...