What to see in Fontanellato, Parma, Emilia-Romagna 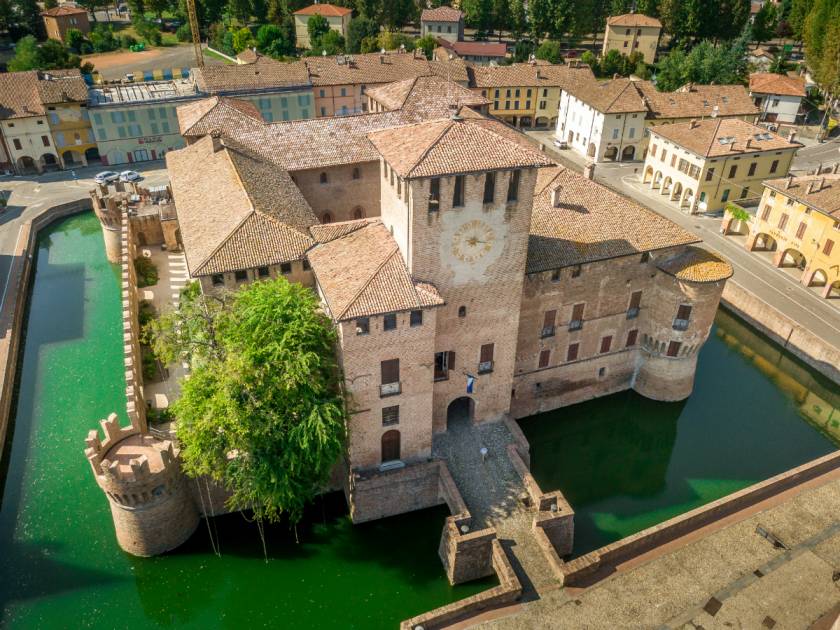 The Rocca Sanvitale, also known as Fontanellato Castle, is a manor house from the medieval entirely surrounded by a moat full of water of resurgence. The original fortification in defense of the village of "fontana lata" was erected from 1124 to the wishes of the Marquis Oberto Pallavicino the First. In the XIV century the Visconti family took possession of the fortress, that in 1378 Gian Galeazzo Visconti gave in benefit to the Guelphs Sanvitale, as compensation for their loyalty. The castle develops on a square plan around a central courtyard with four angular towers, of which three cylindrical. The main facade, entirely covered in brick as the rest of the structure, is preceded by the seventeenth-century masonry bridge access, which leads to the high central tower. Above the large entrance portal round arched open symmetrically two French doors with balcony in wrought iron. At the top there stands a large clock from the seventeenth century with the quadrant inside and outside. The unique golden lancet, enriched with the depiction of the central sun, is connected to three bells, which mark the passing of time according to a complex scheme; the outer dial indicates the 12 hours with Roman numerals, half hours with lances and quarters of hours with lines. To crown rise along the perimeter of the tower and of the entire castle ghibelline battlements, partly covered with roofs. To the left of the access tower rises in overhang a second tower smaller, which originally functioned as a donjon and entrance to the fortress; the masonry shows still at half the height of the signs of the swallow-tailed merlons blinded and bolzoni closed the drawbridge, which is connected through the central portal round arched with primitive Atrium Entrance, subsequently transformed in the chapel of San Carlo. Inside the castle preserves numerous salt can be visited in the noble floor and on the ground floor, rich of frescoes in the sixteenth century and adorned with valuable furnishings and paintings dating back to the XVII and XVIII century; between all it detaches for importance The Little room of Diana and Actaeon, painted by Parmigianino between 1523 and 1524.

Alamiré Suites & Studios
A lovely location located in the medieval heart of Parma in which to spend an unforgettable exper...

Via Caneto, Castell\'Arquato (Piacenza)
23.11 Kilometers from Rocca Sanvitale
Casa Benna
From the end of 90’s onward, continuous improvements have been made with regard to vineyard culti...