Theatre of the Reassured 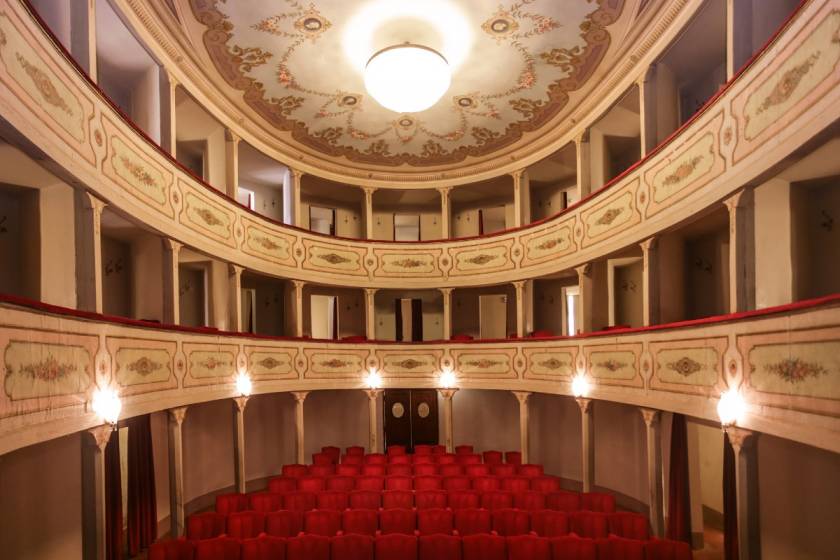 The theatrical tradition in the village of Montecarlo dates back at least to 1639, when a group of young people proposed to the town council to "buy or have made a scene and perspective to play comedies, to which they did not always have to be accustomed by other lower castels in Monte Carlo as they have done so far".

However, there is no other news until 1702, when an association of wealthy people and landowners was formed in Monte Carlo, called Accademia degli Assicurati, with the intention of staging plays in the town, with local actors or companies: the sign of the Academy was the image of the Virgin and a tower, with clear allusion to the fortress and the Madonna del Soccorso, with the Medici motto "Praesidium et Decus", i.e. "defence" and "ornament", both concepts assumed in reference to both the divine figure and the village military installation, already linked by the legend of the miracle of the Madonna's protective apparition on a tower. The academy found the venue for the performances in an open-air open space near the Porta Nuova, with the possibility to use the shelter of large cellars in case of rain, made available to the Florentine family of Bardi, who owned a palace, still existing, in Montecarlo, in Via Pescheria. Around 1750, the Academy bought a private building and made it a theatre, perhaps with a rectangular plan: the institution was suppressed by the Grand Duke of Tuscany in 1791, together with many others of the same kind, but the theatre was reopened a few years later, in 1795.

The Academy was refounded in that year under the new name of "Rassicurati" and the reconstruction of the theatre was entrusted to the Florentine architect Antonio Capretti. The harmonious and tiny oval room, with a maximum capacity of 200 seats, is surrounded by a double order of 22 equally tiny boxes, plus the four proscenium. The room reproduces in miniature the structural and environmental characteristics of the classic "Teatro dell'Opera" of the 18th and 19th centuries. The tempera decorations of the parapets, boxes and vault, which show festoons, cameos and drapes, of a rather eclectic taste, are pleasant, even if very retouched. In the horseshoe shaped corridor that surrounds the hall, on the ground floor, in front of the central entrance, a plaque of 1894 recalls the writer and patriot from Montecarlese Enrico Franceschi, animator of a village philodrama at the beginning of the Risorgimento, who, with his passionate activity, made all the dramatic repertoire of the Risorgimento, from Alfieri to Manzoni, Pellico and Niccolini, familiar to the Montecarlesi family. At the entrance, another plaque recalls the intervention of the poet Giuseppe Ungaretti in defense of the small Theatre threatened by destruction.

On the tiny stage also passed all the repertoire of Italian melodrama, from Rossini to Bellini, from Donizetti to Verdi, and of minor nineteenth-century operas, today almost completely forgotten. After 1871, the young Giacomo Puccini also attended the Teatro dei Rassicurati, on the occasion of trips to Montecarlo in the company of his sister Ramelde, governess in the Macarini-Carmignani house, today Palazzo Lavagna in Via Carmignani. In 1894 the theatre was once again restored and enlarged with the addition of the four "barcacce" of the proscenium.

The Academy dissolved definitively in 1922 and, with a deed of donation, sold the property to the Municipality. In 1965 the demolition of the building was planned, which gradually went into disuse and was declared dangerous for public safety. The old Montecarlesi, however, rebelled and in 1968, by popular will and interest of the municipal administration, began the restoration and restoration of the Theatre, which ended in 1973, when it was reopened with the memorable reprise of the opera buffa Il Ciarlatano, by Domenico Puccini, directed by Herbert Handt, with scenes by Marco Pasega.

In the Teatro dei Rassicurati in Montecarlo, concerts and performances of prose and amateur theatre follow one another throughout the year.

Viale Manzoni, 28 - 51016, Montecatini-Terme (Pistoia)
9.28 Kilometers from Theatre of the Reassured
B&B Antica Fattoria La Verdina
An ancient farmhouse of the eighteenth century used as a B & B, located in the beautiful countrys...

Via della Verdina, 36, Camaiore (Lucca)
30.61 Kilometers from Theatre of the Reassured
= distances as the crow flies