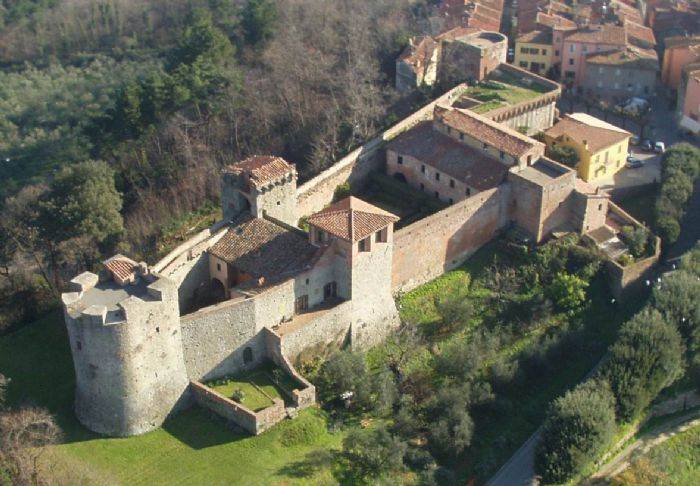 At the northern end of the Montecarlo Hill stands the Fortress, a massive construction made up of different nuclei that in different periods were brought together in their present state.

Since the end of the thirteenth century, on the highest part of the hill, was erected the massive semicircular tower, which is still admirable today in its compact structure of well squared stones and superimposed until the powerful battlements of the crowning. The keep was isolated for some time, and formed the first nucleus of the future Cerruglio fortress. Clear evidence of this is the coat of arms of the Municipality of Lucca superimposed on the lintel at the entrance to the Torrione which, as was the custom in similar types of constructions, was raised from the ground several metres to allow access with the sole help of a staircase retractable by the occupants.

In the Castrucciana period (14th century) two more square tones were added to the semicircular tower, connected with the male by curtains of ashlars and river pills. From that triangle-shaped fortress, the knights of Castruccio Castracani and Azzo Visconti moved from that fortress on the morning of 23 September 1325 to face the ranks of the Florentines in the famous battle of Altopascio, won by the latter. And in that fortified triangle, before the construction of the castle of Montecarlo, in 1328 the nineteenth century Teutonic lances were barricaded and, unpaid by the Emperor Lodovico il Barbaro, they formed themselves in the company of fortune under the name of S. Giorgio. Under the command of Duke Henry of Brunswich-Grubenhaugen they became masters of Lucca, calling Marco Visconti, who was at one time their leader and prisoner.

Viale Manzoni, 28 - 51016, Montecatini-Terme (Pistoia)
9.35 Kilometers from Cerruglio Fortress
B&B Antica Fattoria La Verdina
An ancient farmhouse of the eighteenth century used as a B & B, located in the beautiful countrys...