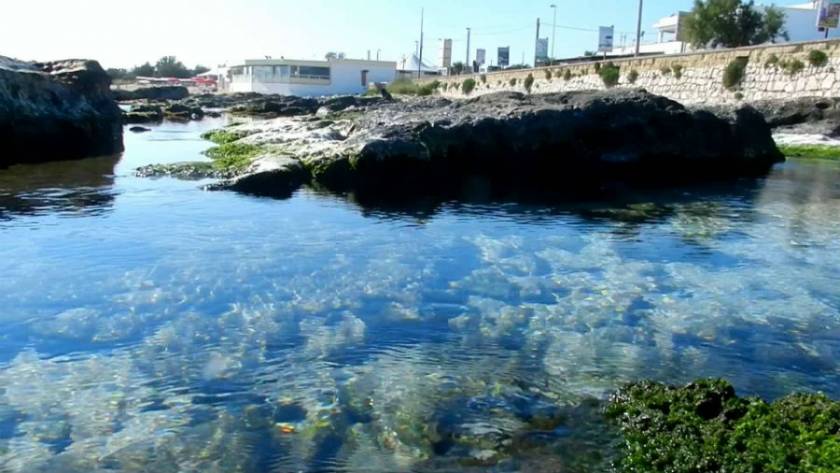 the "sources" of Torre Vado represent, for the inhabitants of Morciano di Leuca, a "place of memory". This is a mirror of sweet water, pure and crystalline, used a time to quench your thirst or to cool down after a hard day of work on the fields when the coastline was dotted with vineyards and fertile land ducts to arable land, who have left the place to second homes and to tourist accommodation fate as mushrooms as a result of the tourism boom of the mass of the early eighties. Today the "sources" are the main attraction of Torre Vado, where residents and visitors can experience the thrill of a tonic bath, with the possibility of fish prized fish such as sea bream, scorpion fish, gray mullet and bass. Sometimes it is possible to admire different species of aquatic birds, egrets and even swans, that occasionally in winter periods spend here the pleasant hours of the day. The historical memory of the place is the Mr Francesco, 73 years of age almost all spent in "hunting" between Morciano and Torre Vado. Rough face and tired, but much energy still in the spirit, tells us of his childhood memories when together with her parents drops from the tracks up to the sea, to "sources", carrying on his shoulders large quantities of flax, woven by hand with the help of the frame. In the spring, we attended to the bleaching of the canvas, i.e. to eliminate impurities due to machining, and this work was at the sources where he immersed himself the soapy canvas in the clear and fresh water; once the abutment and pulled out, put to dry on dry stone walls which delimited the low cliff from campaign behind. The fabric, just dry, you risciacquava and such activity proceeded continuously throughout the day and for several days. The canvas, once became white as snow, was ready for packaging sheets, towels and tablecloths for the table. Francis reminds us that when women ended to lay out the washed fabrics in the sun on the wall to dry, men had to guard it to discourage the intentional mali not razziare the precious goods. Drops a tear from the eyes of the present, pure and bright as the spring water. Around us you form a capannello people, everyone wants to tell a story, a memory, a reminiscence of youth on "sources" of Torre Vado. To me, for example, come into my mind the tales of my prozii, i painted expanses of vineyards that, stains and Scalelle, you propagavano almost right on the sea, where today rise the second homes of morcianesi and of the inhabitants of the neighboring countries, which have made the navy a tourist places more ambite of Capo di Leuca. The "sources", in addition to being a "place of memory", are also a tangible asset, perceptible with the five senses: you see, touch, annusano, one can taste and you hear the sweet melody of the unfolding of spring waters.

Via Madonna di Fatima - 73039, Tricase (Lecce)
12.05 Kilometers from
Hotel Salento
Hotel Salento and Noviera restaurant are located in the village of Specchia, the heart of the Sal...

Strada Provinciale per Miggiano, km 1, n. 53, Specchia (Lecce)
13.06 Kilometers from
Hotel Salento
Hotel Salento and Noviera restaurant are located in the village of Specchia, the heart of the Sal...