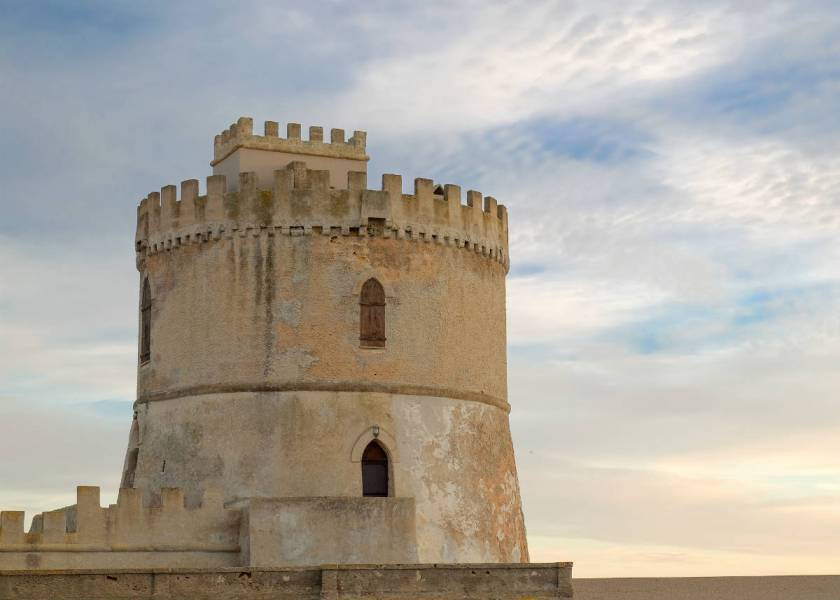 the toponym "Vado" could derive from vadum, passage. In the territory between Morciano di Leuca and Torre Vado are still visible remains of ancient tracks. This is paths roads - from the millenarians origins - and from the country, descending gently by the Murge, winds toward its Marina. The tracks had a width rather reduced (often less per meter), being arranged only at the pedestrian crossing and were delimited by the characteristic dry stone walls. Many of these paths are found often interrupted by walls which prevent the passage. The cause of this interruption is the end of the use of tracks and the fractionation of the landed properties in the course of time. Their main function was that of the connection between Morciano di Leuca and its sea; furthermore allowed peasants to access their impervious, small and stony plots of land. According to oral tradition pastors brought - through these paths roads - their flock toward the sea for cleaning. At the base of the walls of the enclosure of the cisura opens Lu Quataru, the gap with the practical function of preventing the inlet to the flocks that with their graze bring "-turvy integer fields, cimette living trees, which is entrusted with the life itself of trees". The sheepfolds (jazzi, 'ncurtaturi) were encircled by high dry stone walls, often projecting to the outside (paralupi walls), as a bow of ship, equipped with an opening aimed at the passage of the animals (lu vadu), which allowed to count the beasts to return from the pastures. The sheepfold was made where there were benches inclined rock, which permitted the sheep to lie down and stay dry because the dejections, casting, is put between the slits of limestone. Therein were placed on the margins of the walls of the mangers of limestone is tunneled pits in the rock for use as drinking troughs. In some cases the shelters for animals had coverage with canopies of frasche surmounted by bricks of terracotta: these are the suppinne 'mbracchi. The latter type of rural structure has given rise to the toponym Bracchio, locality situated on the highest part of the greenhouse in Torre Vado, on horseback between the municipalities of Salve and Morciano. Nestling at the foot of a greenhouse salentina, Torre Vado is one of the favorite destinations of seaside tourism of Capo di Leuca. The place takes its name from a coastal tower erected in the second half of the XVI century according to the wishes of the Spaniards, in defense of the coast and the hinterland by the raids of the Turks. Dumbledore watchman of a bay that hosts a small tourist harbor, its crenellated profile is reflected in the cobalt blue of the Ionian Sea. A few tens of meters a cozy free beach, pearl of candid sand, allows for the possibility of a regenerating bath close to the most ancient nucleus of the Marina. Torre Vado presents itself as a hospitable place and familiar with a varied tourist offer: sports facilities, a promenade where you can stroll in absolute relaxation, a wide pedestrian area theater of weekly markets and events for adults and children who follow numerous during the summer season. You can not do less than an intoxicating stopover in the fresh "sources", the main attraction of the Marina. This is the natural sgorghi of fresh water used in the past for drinking and for wiping linen fabrics from impurities due to machining. The sea in front of - natural habitat of sea bream, scorpion fish, gray mullet and bass - allows enthusiasts to make rich fishing trips. The clear waters of Torre Vado give hospitality to several aquatic bird species and, occasionally, you can also observe the splendid specimens of swan, who choose the stillness of these places in their long wandering through the winter. A wide expanse of uncontaminated nature, that covers the hills gently sloping down to the sea, jealously guards a myriad of ancient buildings (the pajare) and mazes of dry-stone walls, that make unique a landscape dominated by the gray of the calcareous rock.

Via Madonna di Fatima - 73039, Tricase (Lecce)
11.90 Kilometers from
Hotel Salento
Hotel Salento and Noviera restaurant are located in the village of Specchia, the heart of the Sal...

Strada Provinciale per Miggiano, km 1, n. 53, Specchia (Lecce)
13.36 Kilometers from
Hotel Salento
Hotel Salento and Noviera restaurant are located in the village of Specchia, the heart of the Sal...