What to see in Scansano, Grosseto, Tuscany 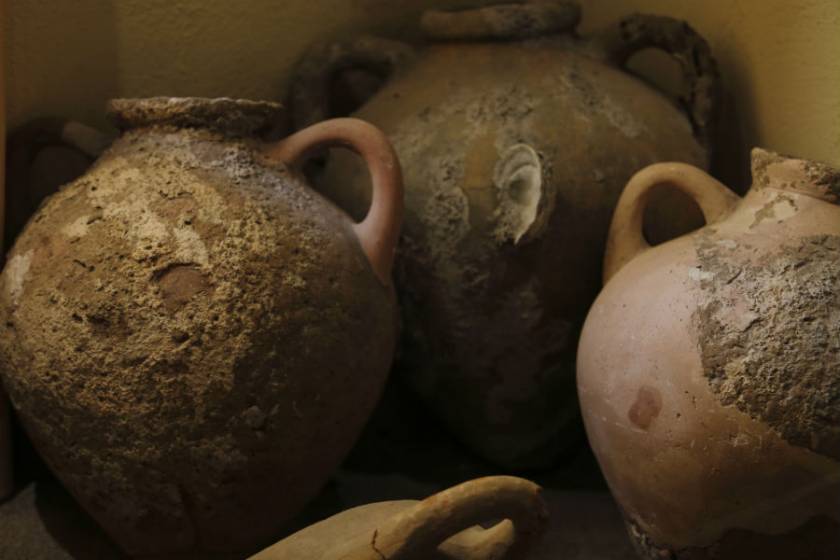 There are goblets, Olle, bowls and other sets of Symposium; a bowl of the IV century B.C. that bears the inscription "statie" on board; some bullets from sling (acorns). The pieces most interesting come from the votive deposit of the shrine of Ghiaccio Forte (VII century a.C.), before the construction of the fortified settlement: a collection of votive heads and especially a statue of a music stand that holds a roncola in right hand.

The Museum describes an ancient economy strongly linked to the production of and trade in wine and reveals that already in ancient times in the Albegna Valley had established a complex die for exploitation in wine, which finds extraordinary correspondence with today's production of Morellino di Scansano and other valuable DOCG of the valley. The archaeological research and genetics started a few years ago along the banks of the river and its tributaries testifies the survival of screws apparently wild, but domesticate in ancient, that in this landscape preserved from the rarefied human presence, from the Middle Ages to today seems to refer to periods of intense wine business of the etruscan and roman age.

The Grape and Wine Museum
The museum of vines and wine is divided into five areas: historical area (archeology of wine); production area; the cycle of vine and wine; area traditions (Workshop of taste); Information area.

The museum aims to document and deepen the evolution of the wine tradition in Maremma, in particular reference to the area of Scansano, known throughout Italy for the production of wine DOCG Morellino. The first section is linked to the archaeological museum illustrating the mode of cultivation and the processing of the grapes, with consequent production of wine, in ancient times since the time of the Etruscans. Are exposed then the old traditional objects such as the rod of the donkeys which transported the "bigonzi" of grapes from the vineyards to the cellars, and particular attention is given also to the aesthetic appearance of the frames of the vineyards that wind through the hills of Scansano. Finally, discusses and shown some wines of low Maremma: Morellino, Parrina, Ansonica, Pitigliano White, Capalbio and Sovana.

Inside the museum was also set up a space for the tasting of wines and local products supplied by companies of the association "Roads of Wine and Flavors Colli di Maremma".

Both museums are hosted inside the ancient Palazzo Pretorio of Scansano, in piazza del Pretorio. Dating back to the XV century, was the Civic Palace of the municipality of Scansano and still retains its original appearance with simple shapes and squared and windows framed in pietra serena. In the XIX century it was also used as a prison and, especially, as vice-The seat of the province of Grosseto, when all institutions transferrd to Scansano for the estatatura.

Via Arenile, 3, Castiglione della Pescaia (Grosseto)
37.43 Kilometers from Grape and Wine Archaeological Museum
Tenuta Il Cicalino
Located at the foot of the medieval village of Massa Marittima, in the picturesque setting of the...

Località Cicalino, Massa Marittima (Grosseto)
56.72 Kilometers from Grape and Wine Archaeological Museum
Trattoria Verdiana
It is a place of simple elegance, where, in winter, you can eat in front of the fireplace and in ...

SP159, località Ponticello,, Manciano (Grosseto)
14.04 Kilometers from Grape and Wine Archaeological Museum
Vecchia Osteria Cacio e Vino
Every dish is matched to a particular wine. You can taste delicious local dishes in a friendly at...

Località Poggio Bertino, 18, Montemerano, Manciano (Grosseto)
14.74 Kilometers from Grape and Wine Archaeological Museum
Vecchia Osteria Cacio e Vino
Every dish is matched to a particular wine. You can taste delicious local dishes in a friendly at...