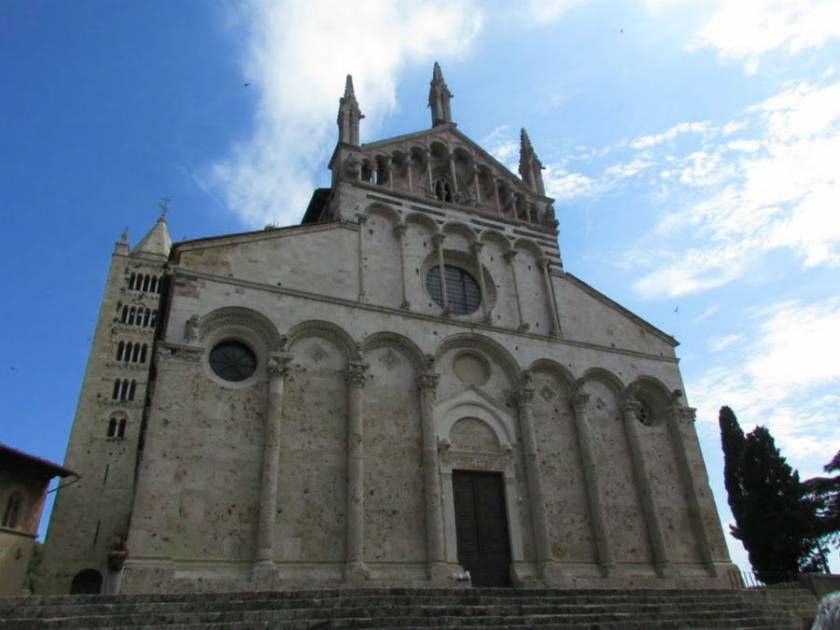 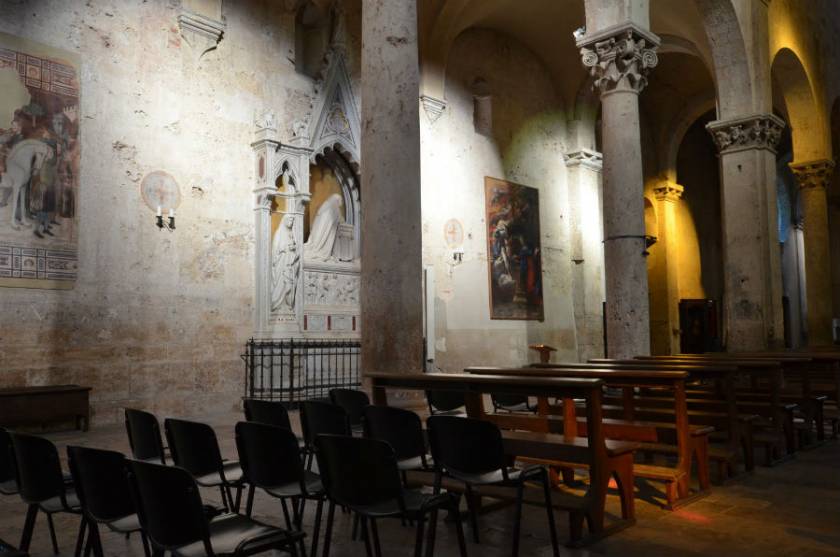 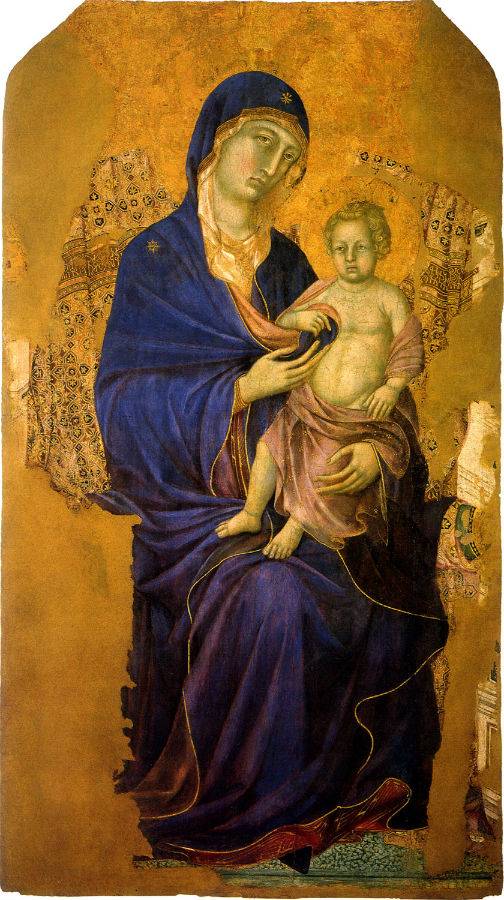 the Cathedral of Saint Cerbone of Massa Marittima was built starting from the XI century in Romanesque style and its construction lasted throughout the XII and XIII century. At the end of this last century Giovanni Pisano modified the third order of the facade (uppermost) and extended the apse in its present form. In the fifteenth century the wooden roof trusses of the nave was modified with the cruises still existing, while the cruises of the aisles were added in the XVII century.

The statement of the church reveals the cultural components that are imposed in Massa Marittima in the course of its history: the lower part to small blind arches decorated by circular openings and lozenges, the median loggia and the overlying tympanum crowning lead back to the influence of the Pisan Romanesque; while the large ogival quadrifora that opens on the crown and the three spires suggest the influence of Siena. In the facade, the central portal is provided with a flat arch flanked by two protomi leonine, which presents in five panels the stories of Saint Cerbone (early 1200s). The three central columns of the eardrum pose on three figures: a man with a beard, a griffon and a horse. The sides, where stretches a series of blind arches, reveal a thirteenth century execution of character Pisano, emphasized also by the decoration bicolor in the elevation, present on the right-hand side. The bell-tower preserves the original character in the lower part, up to three-mullioned window while the upper has been rebuilt in a form very different in the years 1929-1930. The polygonal shape of the tiburio is an inspiration of the fifteenth century.

The interior has a basilican plant with three naves, with cylindrical columns and cruciform pillars that terminate with complex composite capitals. The vaults of the nave are from the second half of the Fifteenth Century, while the lateral ones are seventeenth century. At the center of the inner facade, the rose window is provided with a rare fourteenth century stained glass window of the Sienese school, with the Redeemer in glory and the Stories of Saint Cerbone. On the left you will find the monumental baptismal font, constituted by two parts: the quadrangular tub with the Deesis (Christ adored by the Virgin and St John the Baptist) and the Stories of Saint Cerbone and San Regolo is all of a piece of travertine and laying on the back of four lionesses. The monumental main altar marble Flaminio del Turco (1626) is placed a wooden Crucifix policromada of the same century that has replaced a Crucifix by Giovanni Pisano that today is located in the local Museum of Sacred Art. The upper corners of the altar, two wooden Angels fifteenth, attributable to Domenico di Niccolò dei Cori. Behind the altar, in the midst of the choir, which walls maintains a series of inlaid seats (1462), was placed the ark of San Cerbone, Goro di Gregorio (1324). Has the shape of a URN, with eight stories of the Saint at the bottom, and twelve medallions with the figures of the Blessed Virgin, St Cerbone, of saints and prophets in coverage. On the right wall is a fresco with San Cerbone accompanied by the geese.

The majesty attributed to Duccio di Buoninsegna (1316) is located in the chapel of the left. In the rear part a Crucifixion and some of the Stories of the Passion. The left wall of the chapel was placed the blade fragmentary view of Sano di Pietro with the presentation in the Temple.

Località Poggetto Masino 169, Suvereto (Livorno)
15.62 Kilometers from Cathedral of San Cerbone
Agriturismo Gualdo del Re
A family business with a total area of about 40 hectares

Lungomare Andrea Doria, 30, Porto Ercole, Monte Argentario (Grosseto)
77.45 Kilometers from Cathedral of San Cerbone
Il Poggio di Teo
Between the wild nature of the Maremma and the beautiful sea of the Argentario, the Poggio di Teo...

Località Stellata, 14 - 58014, Manciano (Grosseto)
72.64 Kilometers from Cathedral of San Cerbone
The Garden of the historic center
in the village of Montemerano, two steps away from the Thermal Baths of Saturnia and from those o...

P.zza R. G. Carducci, 18 58033 , Castel del Piano (Grosseto)
55.45 Kilometers from Cathedral of San Cerbone
Hotel Restaurant La Botte
Despite the simplicity of the furnishings, the rooms have all the comforts

Str. Pitiglianese km 19, Montorio - 58010 Sorano, Sorano (Grosseto)
79.54 Kilometers from Cathedral of San Cerbone
Ristorante Dal Cacini
The good Cacini is a must for those arriving in Val Cornia.

Via del Crociﬁsso, 3, Suvereto (Livorno)
17.35 Kilometers from Cathedral of San Cerbone
Il Nibbio Restaurant
This traditional trattoria is the best place to taste local dishes of the Maremman cuisine

Via della Penna 1, Castel del Piano (Grosseto)
55.72 Kilometers from Cathedral of San Cerbone
Vecchia Osteria Cacio e Vino
Every dish is matched to a particular wine. You can taste delicious local dishes in a friendly at...

Lungomare Andrea Doria, 24, Porto Ercole, Monte Argentario (Grosseto)
77.46 Kilometers from Cathedral of San Cerbone
Trattoria Verdiana
It is a place of simple elegance, where, in winter, you can eat in front of the fireplace and in ...

SP159, località Ponticello,, Manciano (Grosseto)
67.73 Kilometers from Cathedral of San Cerbone
Petra Wine
A unique wine cellar in a unique place, Petra receives the mysterious secret from the skies and...

Via Italia in Montemerano, 31, Manciano (Grosseto)
68.41 Kilometers from Cathedral of San Cerbone
= distances as the crow flies