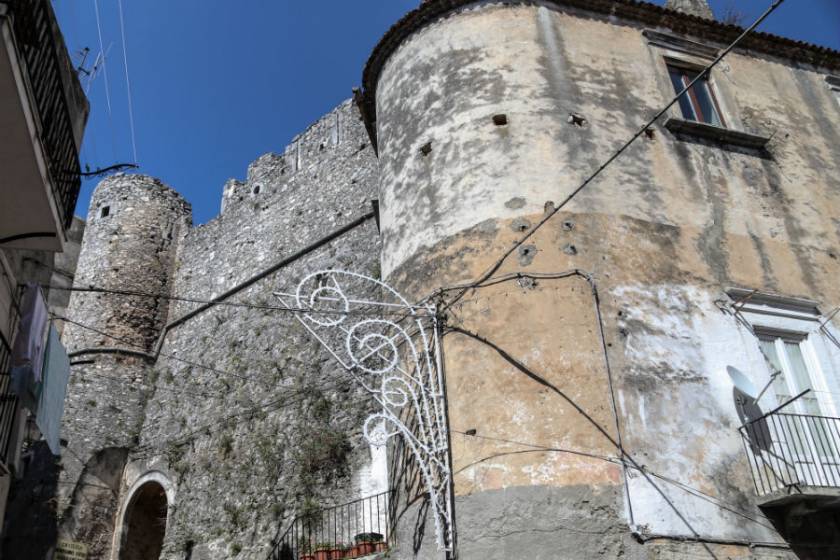 The norman "castrum Vici" of Vico del Gargano is contained in the register of San Leonardo di Siponto and refers to a document of 1113: "Guarino de Ollia to Mr castellano Vico makes it known in the same castle, to possess a piece of land in the locality of Fault". A further news relating to the castle is located in a document of 1144 in which the Church of San Pietro Apostolo "Supra Montem, prope castellum Vici", is given by the Norman knight Enrico de Ollia to the canons of San Leonardo. Another witness is located in a document of 1149 in which the castle is mentioned by Cristofano, inhabitant of the castle of Vico. Reasons of defense are at the base of the first plant of the complex, which in Swabian period is extended and adapted to seat of hunting.

The most ancient nucleus of the castle develops on the axis NE-IF, closed at its corners by square towers. One of NE rises on a shoe of the basis of contoured blocks and blunt, highlighted by a costolone marcapiano; the other if culminates with an elegant mullioned window to all sixth with central column: the latter has a capital to flat leaves and angular loopers, while at the base the remains of an angular foil. The crenellations, with two intervals between Merli on the east side and three on the south and with the respective merli without slits, seems to be the original one. Almost to strengthen the latter slender angular structure, a circular bastion of fortification, the so-called master tower, recalls the aragonese period. The trace of the walls that insists on the axis IF-NO is visible only to sections as the castle are leaned constructions in subsequent centuries. In the vicinity of the current input the trace is interrupted by a semicircular tower which rises on a shoe not very wide; to the north-west corner of a tower to the circular structure rises on a shoe from stringcounse. Inside buildings there is a large courtyard on which overlook either the inputs that damage to the stables and to warehouses terranei, both those leading to the upper floors of civil habitation; in front of the entrance there is a porch covered by unghiata time while laterally is situated the cistern to collect rainwater.

In conclusion here is of the opinion that the German historian A.Haseloff gave regarding the construction: "Our attention is drawn in the first place from the tower north-east (NE) of the castle. So far as remained very little, already the material of the edges of the tower reveals that here we are not dealing with a small and insignificant constructions of the next era; to confirm this opinion is the cross vault of the contiguous plan. Even if we cannot of course say that here the shapes are exclusively principal of imperial constructions, the cross vault with the heavy ribbed vaults and the appearance of modiglioni show an extraordinary resemblance to the castles federiciani built in gothic style: a likeness that - also because similar shapes are not usual in the architecture of the captained- allows you to include consequently this part of the castle of Vico among the imperial buildings years around 1240.