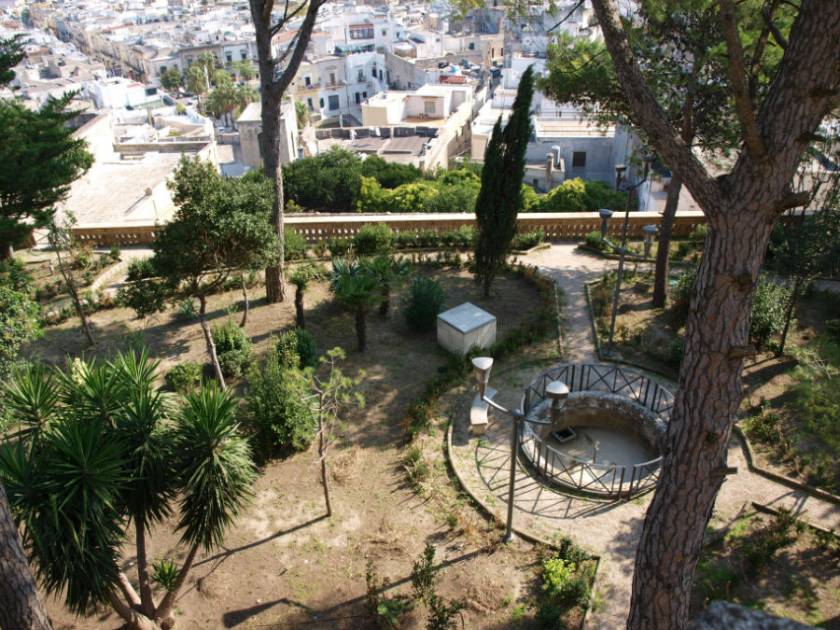 A park located adjacent to the eastern wall of the Norman Castle - Svevo, was originally a plot of land left in a state of abandonment, then transformed, around 1700, by the Fathers Celestini of the nearby convent, in a beautiful and charming hanging garden sloping in several terraces and the employed as pensatoio, as orchard and probably for the cultivation of medicinal herbs, as would demonstrate precisely the presence of the symbol of Asklepios. Later the property passed to the family Salerno - Apples which with great taste he enriched with various plants of exotic origin and many flowerbeds, by framing and by placing it in part as Italian garden and in part to the English, by the creation of a pleasant naturalistic route with panoramic views from which still today you can admire a magnificent landscape. In September 2013, during the works of the redevelopment of Montalbano Park (a mediterranean garden of municipal property located along the north side of the hill on which the castle stands of Oria) were found a series of archaeological testimonies, ranging from the Hellenistic Age (IV-III century a. C.) and the medieval age (X-XII century d.C.). Most of the discoveries are concentrated in three assays of excavation carried out in 2015 that have allowed us to document the existence of at least three residential structures to residential character and productive of medieval age (in one of the houses found, in fact, have been brought to light the remains of a millstone useful for processing of agricultural products), a cemetery (that returned the remains of a dozen people lived probably between the X and the XII century after Christ, in addition to numerous remains of the skeletons attributable to children died after a few months of life).

Via Leone XIII, 21, Grottaglie (Taranto)
18.03 Kilometers from
La Nghioscia
La Nghioscia is a lovely vacation home with 3 rooms located in the heart of Grottaglie

Via D'Alessandro, 74023 , Grottaglie (Taranto)
18.22 Kilometers from
Re Sole Resort & SPA
Located halfway between Salento and the Gulf of Taranto, more precisely in Grottaglie, Re Sole Re...

Via Mannara, 57, Grottaglie (Taranto)
18.60 Kilometers from
Masseria Poesia
Situated in a commanding position with a 360-degree view of the Itria Valley, Masseria Poesia off...

Contrada Cervarolo, Ostuni (Brindisi)
4859.29 Kilometers from
Casa Flamì 2
A nice apartment, ideal for a vacation in Ostuni, consisting of a bedroom and a kitchen equipped ...

Via Pier delle Vigne, 5 - 72017, Ostuni (Brindisi)
4864.04 Kilometers from
PiGreco Charming Trullo
The PiGreco Trullo is a charming bed & breakfast in the beautiful village of Ostuni

C.da Galante - 72017, Ostuni (Brindisi)
4855.75 Kilometers from
= distances as the crow flies
La Locanda del Ristoro
Starters, orecchiette and meat dishes stand out between all the courses.