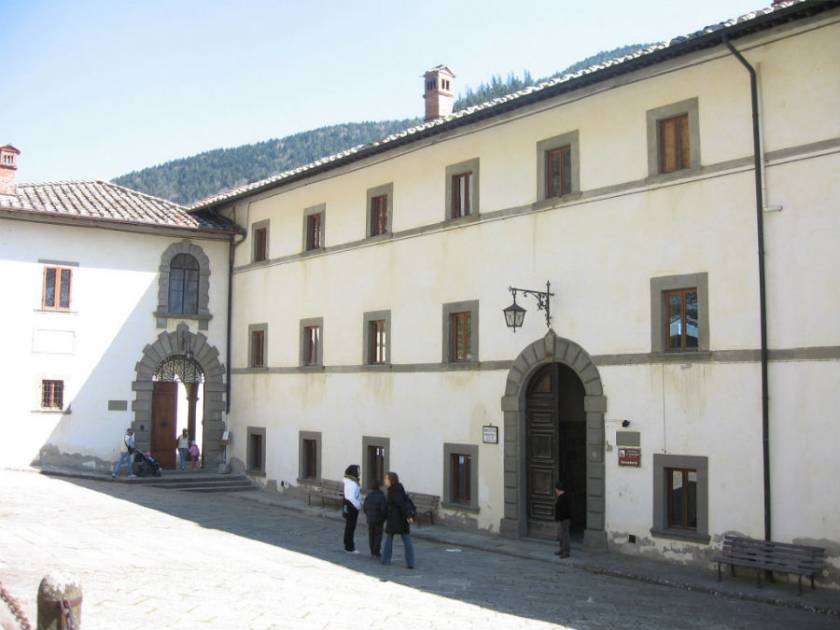 The monastery of Camaldoli is a monastic complex situated three kilometers from the Hermitage of Camaldoli, in Tuscany. In July 1943 client will haveaò the work that led to the drafting of the Code of Camaldoli. It rises on the banks of one of the branches of the river Archiano, cited by Dante Alighieri (Purgatory, hand fifth, verse 94).

The architectural complex is compound from the ancient hospice or foresteria, by the Church and the monastery. Was built starting from 1046, when in the vicinity of the church of the monks built a small hospital. Construction work on the current monastery began in the 16th century and saw the magnification of the cloister on the north side of the Church and on the west side of the hospital which was incorporated. The work was concluded in 1611. Camaldoli was also known with the name of Fontebuona for qualityà and the wealth of the waters that were celebrated by the monumental fountain that Ambrogio Traversari made build in front of the entrance of the monastery. Characterized by lines very sober, was enlarged in the XVI century. The building is gathered around the central cloister that presents on the south side and on the west side, the side exposed to the sun, a series of round arches resting on columns with Ionic capitals. On the sides north and east, those beaten by icy winds, are present only some windows also arc. On the upper floor of the cloister are present in corridors with barrel vault and in the long, about 85 meters, on the cask of coverage there's a decoration composed of a series of hatveils with friezes of various kinds. On these corridors open the cells of the monks.

The Refectory was completed in 1609 and è characterized by simple and sober lines of Tuscan mannerism. It's furnished with stalls in walnut and tables from the severe line. The entire surface of the bottom wall is occupied by a canvas by Cristoforo Roncalli, known as Pomarancio, portraying Christ served by the angels, and è was made on the spot in 1611. Above the entrance door is located a handsome pulpit of Serena stone that was used for the reading of the sacred texts during lunch. The walls are also some tables of the XVII and XVIII century. The most interesting are those made by the Florentine painter Giovanni Camillo Sagrestani depicting the Deposition from the Cross and the Resurrection of Christ. At the sides of the pulpit there are two works of Lorenzo Lippi depicting Jacob that watereth the sheep of Rachel and the triumph of David. The ceiling of the refectory è coffered and was completed in 1606 and è work of some monks of the monastery itself, including the monk Simone that is the author of the statue of the Madonna in polychrome wood and rosettes. At the end of the XVIII century the ceiling was decorated with a whole series of winged heads in papier mache that appesantirono opera; were all replaced with copies during the renovation works, conducted by the Superintendence to the monuments, in 1971.

The Church, dedicated to San Donato and san Ilariano, rises on an area occupied by four churches through the centuries. On the occasion of archaeological excavations carried out in 1979 were brought to light the remains of the structure destroyed after a fire in 1203 and it was possible to see the overlapping of the buildings. The church was rebuilt at the beginning of the XIII century and was decorated in 1361 by a series of frescoes by Spinello Aretino. Among the works of art present inside stand out the seven tables made by Giorgio Vasari, tables made for the previous sixteenth century building.The blade greater depicts the deposition from the Cross and is situated at the high altar. Under the grates to balcony from which overlooks, on the nave, the monastic choir are placed two other small tables, always of Vasari, depicting the two owners of the church of San Donato and San Ilariano. Two other vasariane blades are placed in the chapels located near the presbytery. One representing the Nativity of Christ, the other portrays the Virgin enthroned between Saint John the Baptist and Saint Jerome, in this work, the first formed by Vasari to Camaldoli, in the landscape in the background are portrayed the monastery and the hermitage of Camaldoli così as they appeared in the sixteenth century. In the presbytery, bordered by stone steps there are two of the four paintings by an unknown author, representing the Evangelists, while the other two are in the nave.

In 1046 the monks had built a small hospital in order to be able to cure the sick of neighboring countries. In that structure patients were treated for free and the health care was ensured by the doctor of Poppi that was employed by the same monks who, in case of death, provided at their own expense to ensure the funeral and the burial. The corpses were deposited in the loculi located beneath the floor of the lower corridors. The Hospital remained in use until the Napoleonic suppression of 1810. The hospital remains the ancient Pharmacy or better the old Galenic laboratory where they were prepared and processed herbs for the preparation of medicinal products. In the monastery are preserved documents with inside them recipes dating back to the XV - XVI century. You still preserve many instruments that were part of the ancient cabinet pharmaceutics as stills, mortars, stoves and there are still books and medieval schedules.

The Foresteria constituted the first construction of the monastery of Camaldoli. During the priory of Blessed Rodolfo (1074-1089) here was organized the monastery that already from 1080 welcomed those who wanted to dedicate to the monastic life and always in that period was built the cloister said of Maldolo that still serves as a reception room for visitors. In the first years of the XV century under the guidance of the prior Ambrogio Traversari organizzatala was the first school for the cultural preparation of novices and to be able to give an accommodation in the latter was made the second cloister, in renaissance style, said of children. In the guesthouse in the second half of the Fifteenth Century accommodationò Even Lorenzo the Magnificent, with its court of writers composed by Marsilio Ficino, Leon Battista Alberti, Cristoforo Landino and others. There were joints to start a comparison with the monks on research and on the questions which the Renaissance raised. The library of foresteria collects about 35,000 volumes and is located on the same plane that welcomed the renaissance academies and è installed in an environment that is specially crafted.