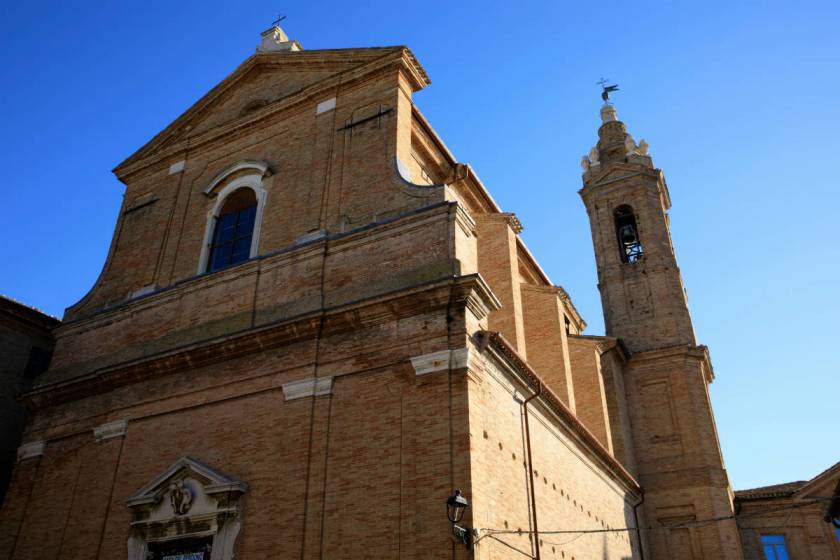 Maria Goretti is venerated as a saint and martyr by the Catholic Church that canonised on 24 June 1950. Mary was born in Corinaldo on 16 October 1890. Having regard to the conditions of misery, in 1897 his family moved into the Roman countryside to look for a job. The Gorettis divide the house with the Serenelli, the Father and the son Alessandro. When Mary has almost 10 years old his father died because of malaria haunts those areas. Marietta, as it was called, helps his mother dealing with the brothers and the house, supported by a great faith in God. Alessandro, twenties when Mary has 12 years, trying some approaches with her, that Maria refuses. On 5 July 1902, opposite’nth refusal of Mary who says “No, no, God does not want, if you do this go to’hell”, Alessandro repeatedly strikes with a punch. Transported to’hospital of Neptune, Maria died the following day, not before having said to his mum “for love of Jesus the Pardon, I want to be with me in Paradise”. Alessandro is stopped and passes 27 years in prison; back when free meets Mamma Assunta and the two will reconcile, in the sign of the forgiveness of Marietta. Your forgiveness of his assassin, together with the strenuous defense of virtù lead Maria Goretti to be proclaimed saint on 24 June 1950 in Piazza S. Peter, in the presence of the mother. The Holy è known and venerated today throughout the world and there are many parishes to her titled.

The Diocesan Shrine of Santa Maria Goretti, located at Hilltop the historical center is easily identifiable for the spire of the bell tower of the church of Sant’Augustine above the roofs of Corinaldo. To the left of’input are present the mortal remains of Mamma Assunta deceased at Corinaldo in 1954; while to the right ones of Alessandro Serenelli. In the central altar in white marble from Carrara, near a wooden sculpture of Saint Maria Goretti is positioned a’urn in silver containing the arm's bone of the Saint, arm with which the Martyr tried to defend herself from her aggressor, Alessandro Serenelli.

The birthplace. a kilometer and a half from the historic center, in contrada Pregiagna, is located the birthplace of Saint Maria Goretti, easily reachable by bus. The small peasant dwelling, structured on two floors, maintains the ground floor an environment with elements of the primitive stall, while where it was located the cellar is now present a small chapel dedicated to Santa Maria Goretti. On the upper floor there is the dining room, with at the center the fireplace and two other environments. To the left the Chamber of Luigi Goretti and Assunta Carlini: is here that on 16 October 1890 was born “Marietta”, as they used to call it in the family. In this room are preserved original furniture of family Goretti, between which the bed and the framework to capoletto donated by Mamma Assunta.

The baptismal font. right from the entrance, in the parish church of San Francesco, is present a small monument in white marble from Carrara dedicated to Santa Maria Goretti and in front of the monument the bust of Pope Pius XII, the Pope who beatified her on 27 April 1947 and sanctified then on 24 June 1950. Exceeded the door it accesses the baptistery where right under a round stained glass, is placed the baptismal font in which the saint was baptized on 17 October 1890.

Via Caracciole snc, Fossombrone (Pesaro e Urbino)
16.92 Kilometers from Diocesan Sanctuary of Santa Maria Goretti
Cà le Cerque
A lovely villa nestled in the typical hilly landscape of the Marche region in the village of Foss...

Via Antonio Cecchi, 12, Fossombrone (Pesaro e Urbino)
17.20 Kilometers from Diocesan Sanctuary of Santa Maria Goretti
B&B Casa Sponge
B&B Casa sponge is a small corner of tranquility and art immersed in the hills around the Pergola...

Loc.tà Piano di Rocchetta, 12, Genga (Ancona)
21.54 Kilometers from Diocesan Sanctuary of Santa Maria Goretti
Cupramontana-Accoglie
A tourist information centre that aims to be at the disposal of visitors who want to spend happy ...

60034, Cupramontana (Ancona)
23.34 Kilometers from Diocesan Sanctuary of Santa Maria Goretti
Cupramontana-Accoglie
A tourist information centre that aims to be at the disposal of visitors who want to spend happy ...