The beautiful Bevagna is 'City of the Cinema'

The charm of the Umbrian town 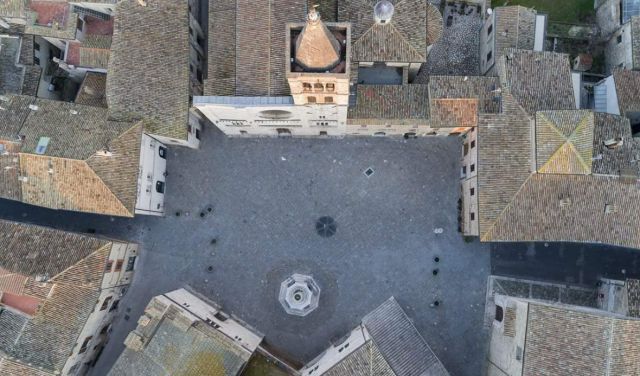 That Bevagna was beautiful it was known. Now comes an important recognition for the town near Perugia. Let's see what it is. But not before talking about these magnificent and small walls.

THE CHARM OF A SQUARE
Bordering with Foligno and Montefalco, to the south of the province of Perugia, in the area that begins to look at Spoleto, Bevagna is a treasure chest. Famouse is Piazza Silvestri, which is accessed by going through the course, once you enter the door Foligno or Flaminia. Already engaging the road that converges towards the center of the civic agora, one understands well the classical medieval town planning. And so the ancient Mevania square cradles the visitor at the height of a downhill passage through Roman remains and interesting churches. But here is the centerpiece of everything. Also in a properly artistic sense. A wonderful and neo-medieval fountain, a Roman column, two important churches, the Palazzo dei Consoli with the theater. Bevagna is all here. It is through the centuries-old charm of this square: beautiful even in its almost asymmetry; austere and extravagant together. The area lacks a strictly geometric order, preferring, if anything, the dimension offered by the perspective game. The field of vision, however, is majestic and serene, flat. Inside Bevagna you do not have the sensation of living the over famous Umbria of the hills and the soft, but often wild, hills. As soon as you leave the village you return to that environment, with churches and sanctuaries located higher up. Here the 'flat' brightness is precise and almost severe. A scene also made of an imposing and dramatic silence, it is appropriate to say. Come and discover Bevagna also outside the seasonal tourist flows. Easy to breathe that air of devout meditation that captures in the two ascetic churches that in the square are home: San Michele and San Silvestro. We are in the middle of the late Middle Ages. An important moment for all of Umbria. It is impossible not to mention, then, the Roman column, called San Rocco. The famous fountain dates back to 1896. The Palazzo dei Consoli, 1270, offers a very elegant façade, with its mullioned windows and elegant loggia. A staircase and here is the access to the Torti theater, 1886. Three tiers of boxes for a theater that is not large but linear in its harmony. The 16th century vault unites the palace with the Romanesque church of San Silvestro, a true masterpiece of Roman Umbrian art. Opposite, the church of San Michele, from 1100, also Romanesque. Here is the bell tower, with Gothic gable.
On the beautiful and spectacular square (from the impact, it has been said, however discreet) takes place the famous market of the Gaite of Bevagna, inevitable appointment with the traditions of the medieval city. An event in which virtually the whole city participates and, for years now, more and more tourists come from all over Italy and the world.

THE NEWS
Then we tell you the interesting news about Bevagna directly with the words of her mayor, Annarita Falsacappa. A nice breath of oxygen for the city. Even beyond the cinema and art.

"It's official and I'm really happy to inform you that Bevagna has won the title of Città del Cinema, really good, given the ancient memory of our director Mario Mattoli and his film shot in Bevagna," Musica in piazza ", with extras of the country But there's more! We know that the municipalities, to be able to shoot with important actors and productions of call, which advertise their territory, are willing to pay even handsomely and, often, the movement of a troupe from one municipality to another depends precisely on the extent of the contribution.For us it was different.We started in May with the filming in one day of "Il Nome della Rosa", a television show in 8 episodes that will be broadcast by Rai 1, and we asked and got to fix our fountain, for decades without gushing and dumb, today gorgoglia festosa and is a source of attraction for our children but also for the many tourists who choose the exact shot for the photo. The director Paul Verhoeven, very coveted by every city not only Italian, finished in Bevagna for the trip made in Umbria by a lady of his staff, who had visited our country and had been enchanted by the square, he walked through our streets, he worked in our good living room, he lived in one of our houses and, for a long time, he shared our spaces. What could be more incisive for the promotion of a country that is always a bit defunct than a film by Paul Verhoeven? Yet we have tried and we have obtained from the production the figure of 50 thousand euros for the controlled opening of three gates. For us it is really a lot, this will allow us to monitor the access of the three busiest streets of Bevagna, to regulate traffic, to enforce the schedules of the ztl and pedestrian areas. We are preparing all the necessary documents and, as soon as the practices are completed, we will proceed with the installation. This goes in the direction of a reorganization of the road, allows us to complete the discussion on parking for residents and paid and new areas to be allocated to parking in the areas of Bevagna where they are insufficient.

What to see in Bevagna

St. Micheal's Church
Church of San Silvestro
Consuls' palace
More...
are you an Italian villages lover?
Join our Community
and share you experiences!