From the Tuscan-Emilian Apennines to the Parma Baptistery, the land of the slow mix is a World Heritage Site

An astonishing landscape between Parma, Piacenza and Reggio Emilia that boasts places so dense and important on a global scale as to merit the attention and prestigious certification of UNESCO. 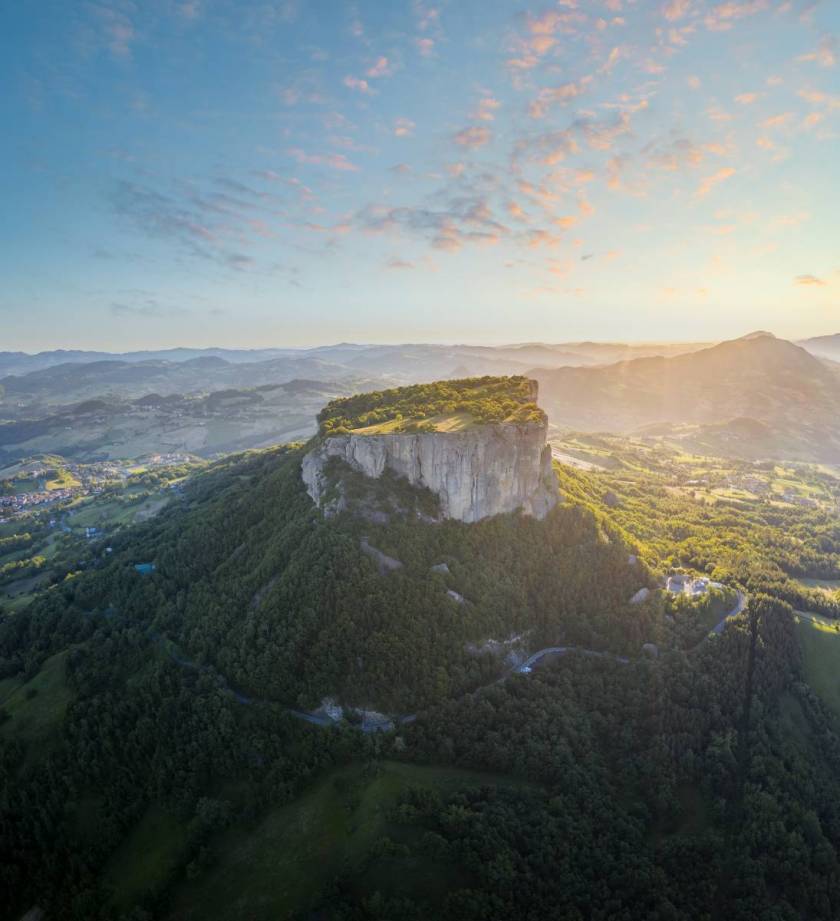 In one way or another, at any latitude, we all have at least one place in our heart, a place that acquires subjective importance by virtue of a personal memory or because of the significance it is given individually on an emotional level. And yet there are intersections of coordinates which, because of characteristics that make them universally unique, are surrounded by an aura of exceptionality capable of endowing them with collective interest. An astonishing landscape, a building embodying the sense of an era, a city identified by a particular tradition and lifestyle, even more than by its monuments: there is no single criterion for identifying what is objectively a gift for all humanity.
As a land of the slow mix, Visit Emilia has long sensed the need to gather its wealth into networks that can suggest experiential paths on the otherwise overlapping levels of wellness, nature, food and wine, and culture. To an even higher degree, the area between Parma, Piacenza and Reggio Emilia boasts places so dense and important on a global scale that they deserve the attention and the prestigious certification of UNESCO, that is - to cut a long story short - the organisation that implicitly establishes what you must do, see or taste at least once in your life. 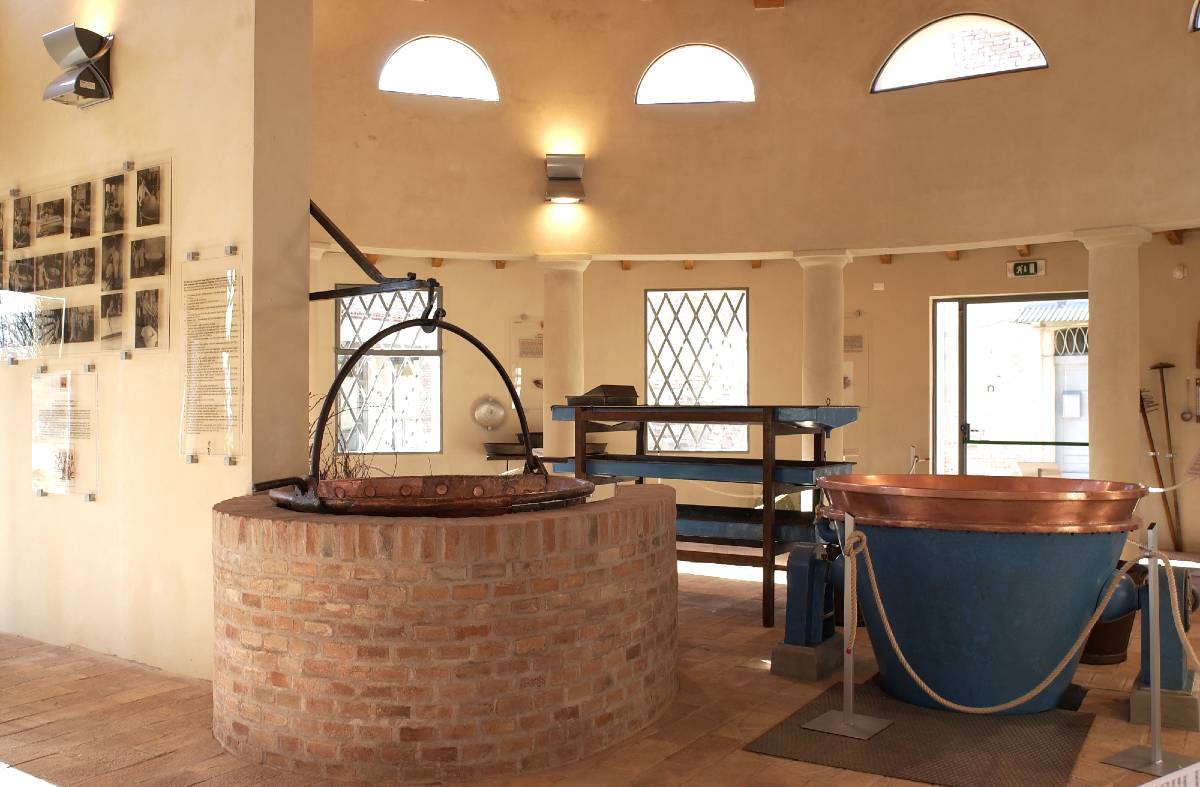 Crossed by the winds of Europe and the currents of the Mediterranean, between the sea that bathes the west coast of Italy and the plains where you float on the waves of an evocative fog, the Tosco-Emilian Apennines have been a MaB (Man and Biosphere) Reserve since June 8, 2015. Immersing oneself in its paths is not simply a matter of walking but, on the contrary, of crossing at least two worlds that change, overturn and regenerate colours, emotions, scents and perspectives in the four seasons. It is a place made up of other places, where man and nature seem to merge into a single entity to create a complex ecological and cultural mosaic, the basis for the evolution of a heterogeneous and precious landscape, to be discovered under the summer sun, amidst the exuberant blossoms of spring, in the enveloping chromatic blanket of autumn or in the candid metamorphosis of a winter that seems to erase the traces of the recent past. By stamping its MaB Reserve label on this elusive dimension dotted with villages, castles, churches and flavours, UNESCO is issuing an invitation to enhance, protect and disseminate a fragile yet powerful balance that can be enjoyed on boots, snowshoes, skis or a bicycle.
The mighty Pietra di Bismantova, in the Reggio Emilia Apennines, is a must for climbing and hiking enthusiasts, offering a unique panorama of the most important peaks in the Tuscan-Emilian Apennines. 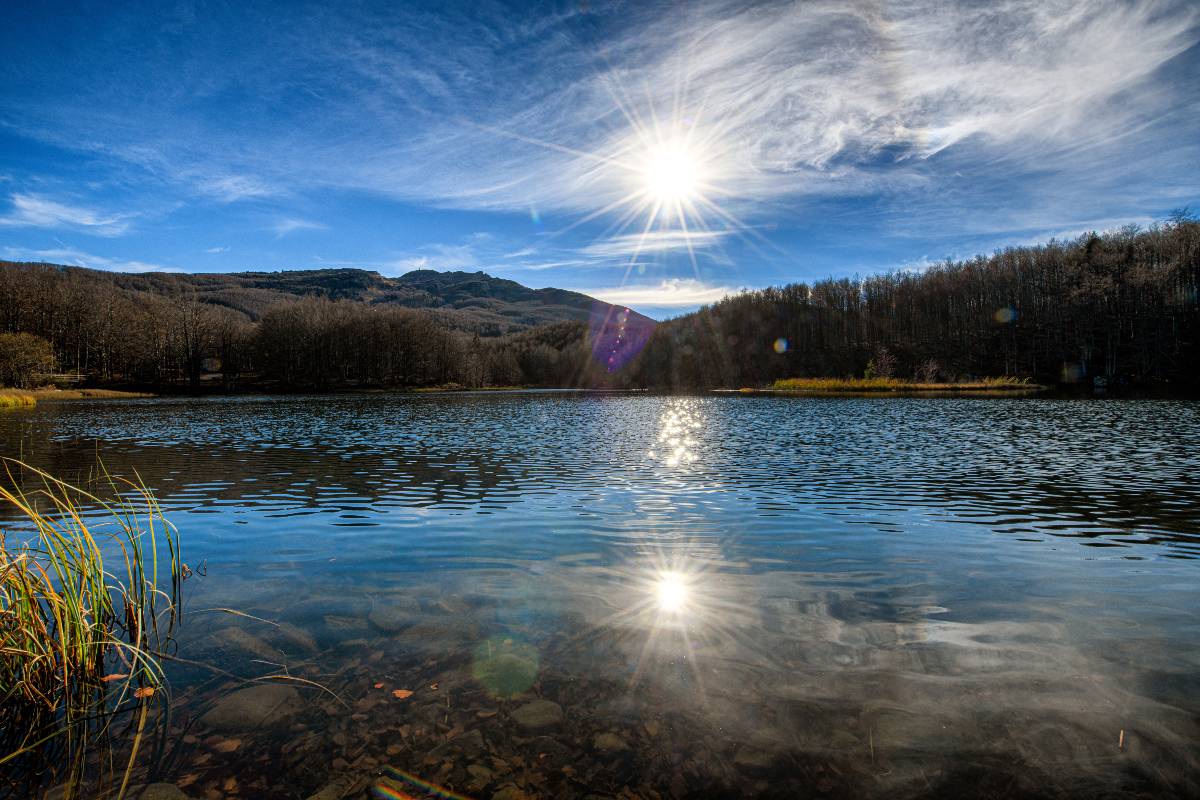 To hear those who have inherited the legacy of previous generations - living and working along its course - the true monument of northern Italy is the Po. There are no doubts or hesitations. In the three provinces of Visit Emilia, the Great River is not just a watercourse but an integral and decisive part of the existence of a population which, in the reflection of its restless surface, constantly relives and revises its history on flat and complicated but undeniably fascinating lands.
In the central stretch of a never-ending journey towards the mouth of the river, which includes the provinces of Piacenza, Parma and Reggio Emilia, the MAB Biosphere Reserve of the Po Grande shines a spotlight on a landscape that is as concrete as it is fairytale, where woods and clearings, streams and ponds alternate with evocative urban centres thanks to banks and paths, in the umpteenth repartee of that close-knit and inexhaustible dialogue that is, after all, the basis of a culture. 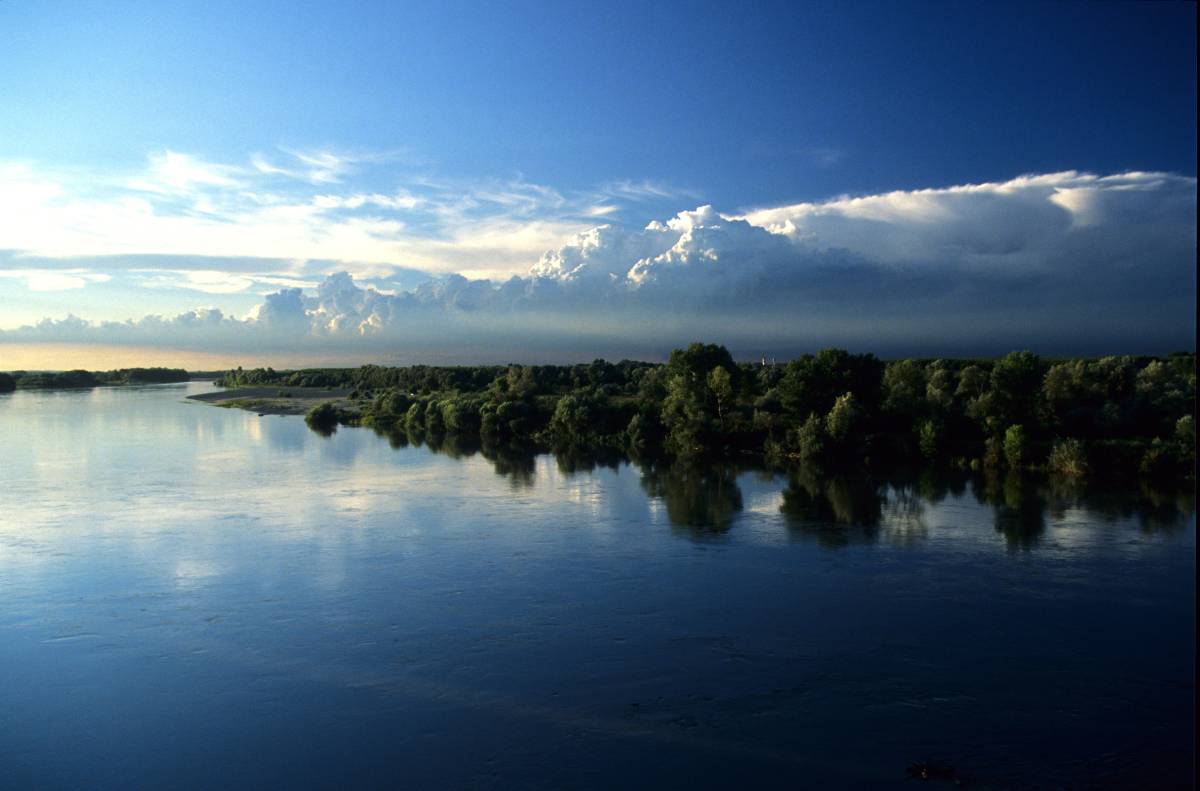 By its very nature, such a complex environment can be explored in a variety of ways. If riding a mountain bike or relying on the soles of your shoes you inevitably have the opportunity to capture the variety of sounds and colours of the landscape, canoeing almost seems like whispering in the ear of the river, while fishing on its banks you feel like you are part of an event as old as the world. The boat trips, combined with cycling itineraries and visits to museums and villages, offer a further variation on the range of opportunities for discovery, from gastronomic events such as November Porc to moments of in-depth study in which the reserve becomes an educational classroom.
Nature lovers, for example, cannot fail to be enchanted by the Serafini Island basin, the largest river island on the Po (connected by a bridge to the mainland), where they can admire various types of endemic vegetation and many animal species such as sea swallows, little terns, hawks, owls, woodpeckers and bee-eaters. In 2017, the “corridor” was also inaugurated, allowing fish to swim up from the sea to Lake Lugano. The entire length of the Great River is navigable and educational and tourist visits are organised.
It is well known that the territory can also be discovered at the table, and Emilia is a master in creating excellent products, such as Parmigiano Reggiano, Traditional Balsamic Vinegar of Reggio Emilia, Cacio del Po and DOP cheeses from Piacenza - from the famous Grana Padano to Provolone Val Padana - as well as world-famous cured meats, such as the three DOPs from Piacenza: Coppa, Pancetta and Salame. 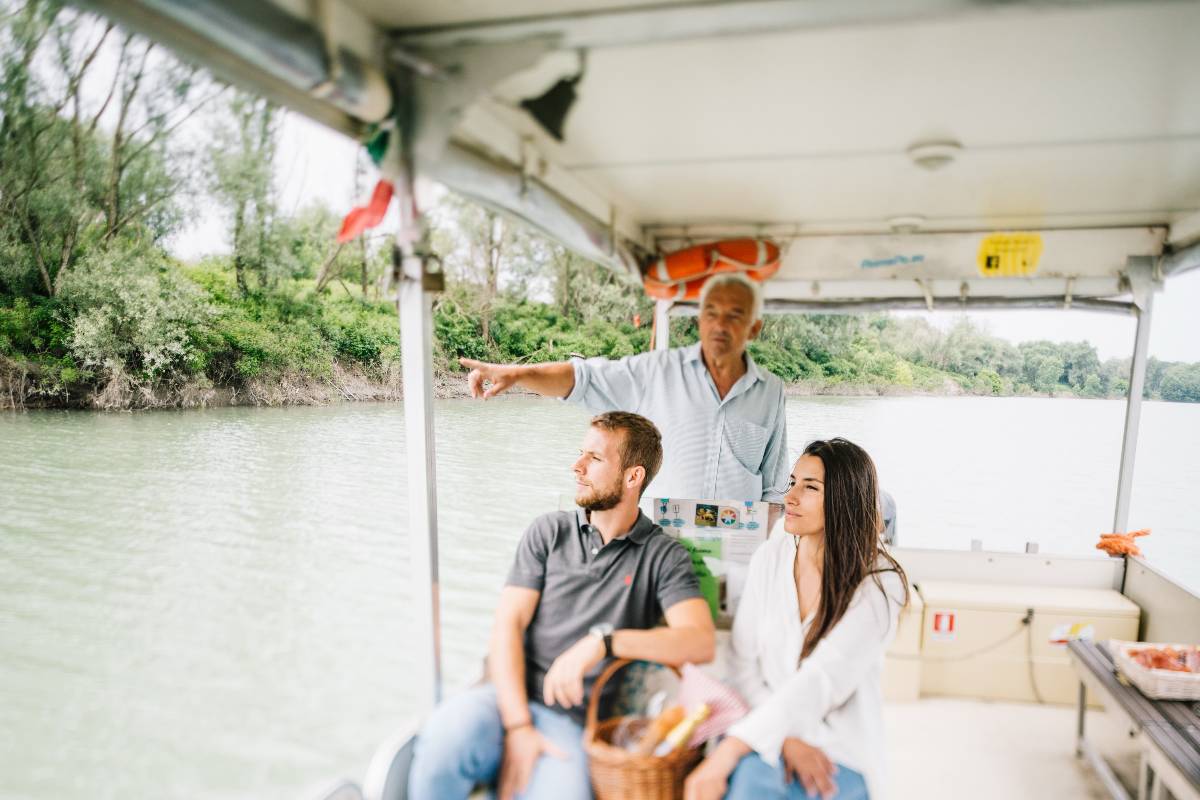 While ideally browsing through the dishes and products that make up its lush gastronomic heritage, the feeling is that when Parma became the first City of UNESCO for Gastronomy in Italy in 2015, it must not have been exactly overwhelmed with surprise.
The proclamation has essentially certified a reality in the heart of the Food Valley that has turned food into an art and a source of pride, dedicating itineraries, events and museums to taste, in an extremely rich cultural context, in the shadow of the innumerable manors united under the label of the Castles of the Duchy.
Parmigiano Reggiano, Prosciutto di Parma, Culatello di Zibello, Salame di Felino and Fungo di Borgotaro are just some of the excellent products that have helped create an authentic legend of good food and quality, underlining the value of passing on practices and methods from one generation to the next. Never before has it been so true as in this case that to truly understand a city, you must learn to distinguish its flavour. And here the flavour is a triumphant papillary parade that ranges from torta fritta to tortelli d’erbetta, passing through the haute cuisine of the Alma - International School of Italian Cuisine based at the Reggia di Colorno – the respectful reworking of starred restaurants and the familiar and festive atmosphere of trattorias, events and festivals in an endless and unstoppable Food-themed programme. 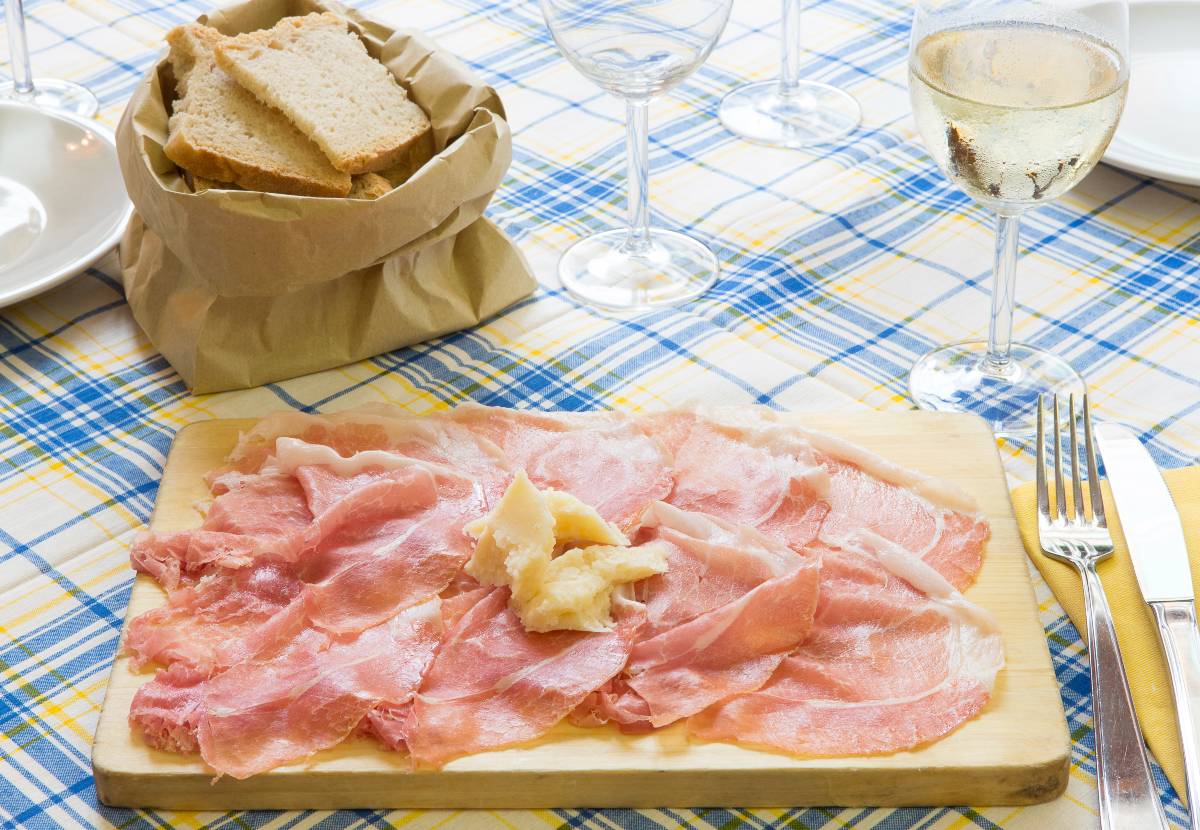 While remaining in Parma, it is impossible not to notice how every corner of the city offers unexpectedly beautiful artistic and architectural highlights. The Pilotta complex, the Palazzo Ducale and the Teatro Regio are all part of an amazing mosaic, with the Baptistery perhaps the most brilliant piece.
As well as being one of the most interesting medieval monuments in Europe, the building which, together with the Cathedral and the Palazzo Vescovile, forms the stunning choreography of Piazza Duomo, shares with Stonehenge, the Pantheon in Rome and the pyramids of Egypt the designation granted by UNESCO to the sites of greatest astronomical value in the world.
While the famous cycle of months is a clear reference to the cosmos, the orientation of the masterpiece designed by Benedetto Antelami seems to take into account the relationship between the Earth and the cosmos itself, making the architectural object a gigantic sundial. 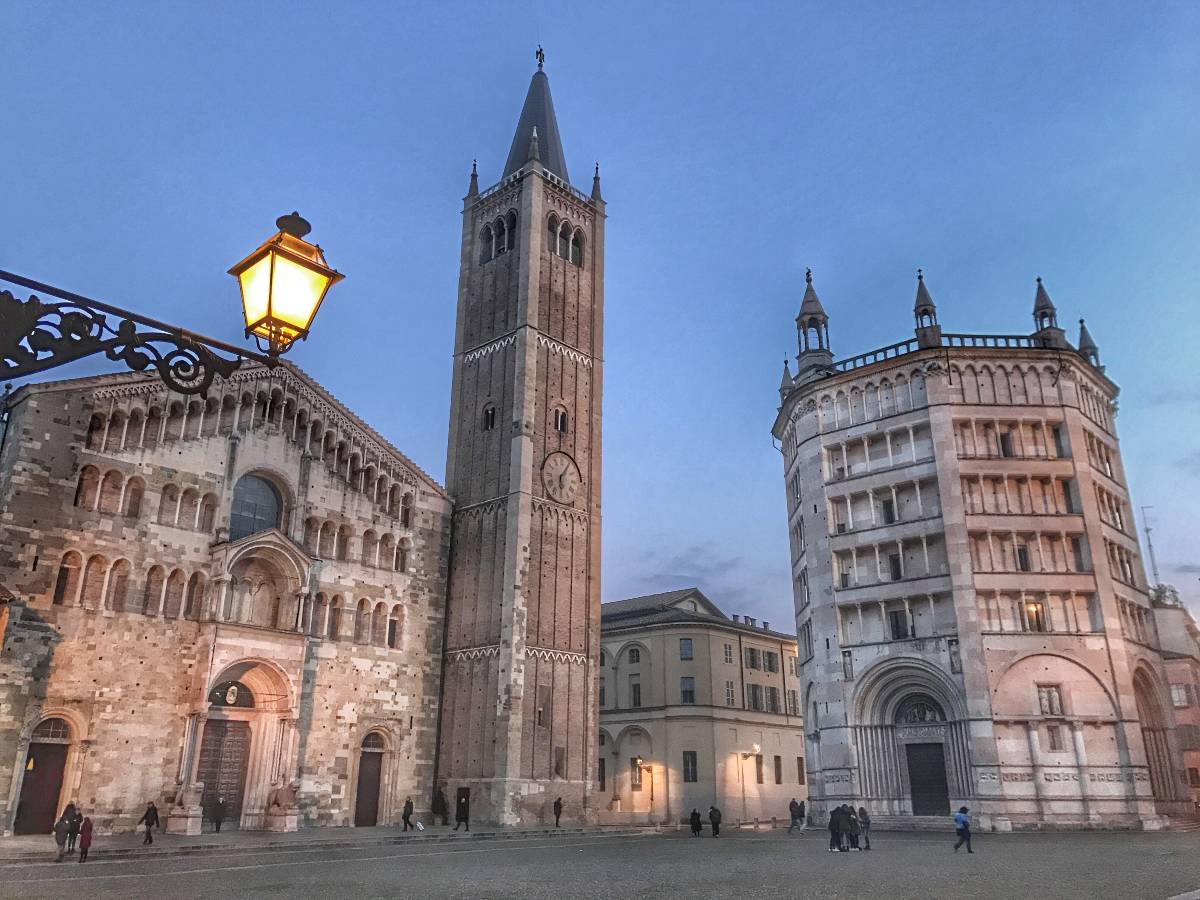 Not just the sea: an essential guide to the mos...
Cycling in Abruzzo, great emotions on two wheels
A plunge into the singular beauty of the Abruzz...
More...