At the lake, in the hills or in the mountains. Discover art, nature, tradition and unique taste with the formula "you are our guest two nights out of three". 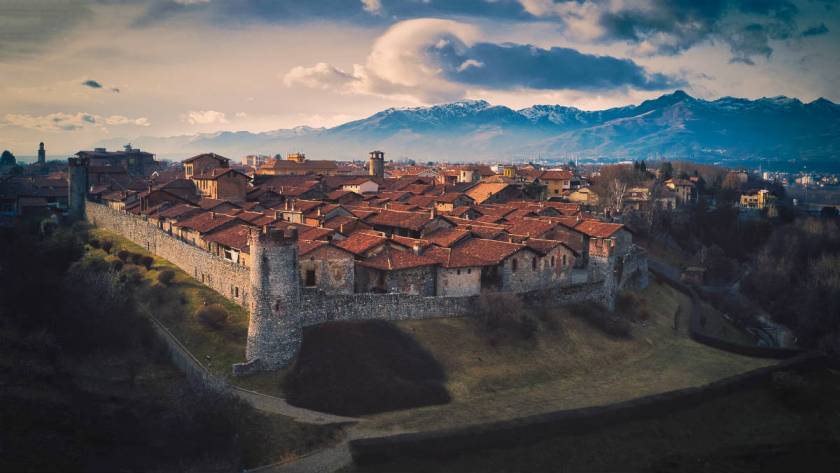 There is a world of widespread beauty in Piedmont, of stories to be told, of scents and flavours to be experienced: 14 small towns included among the Most Beautiful Villages in Italy, 34 awarded the Orange Flag as a mark of tourist-environmental quality, 5 marked with the Green Ear for sustainable rural development. And throughout the region there are more than a thousand municipalities with less than five thousand inhabitants, custodians of art, nature, history, food and wine and "typicality" as a way of life to be enjoyed with all the senses.

Get to know them by taking advantage of the "You're our guest two nights out of three" campaign: until 31 December you can book hotels, B&Bs, campsites, accommodation and farm holidays and enjoy your stay until 31 December 2021. And there is also a 50% discount on tourist experiences and services. Info on www.visitpiemonte.com 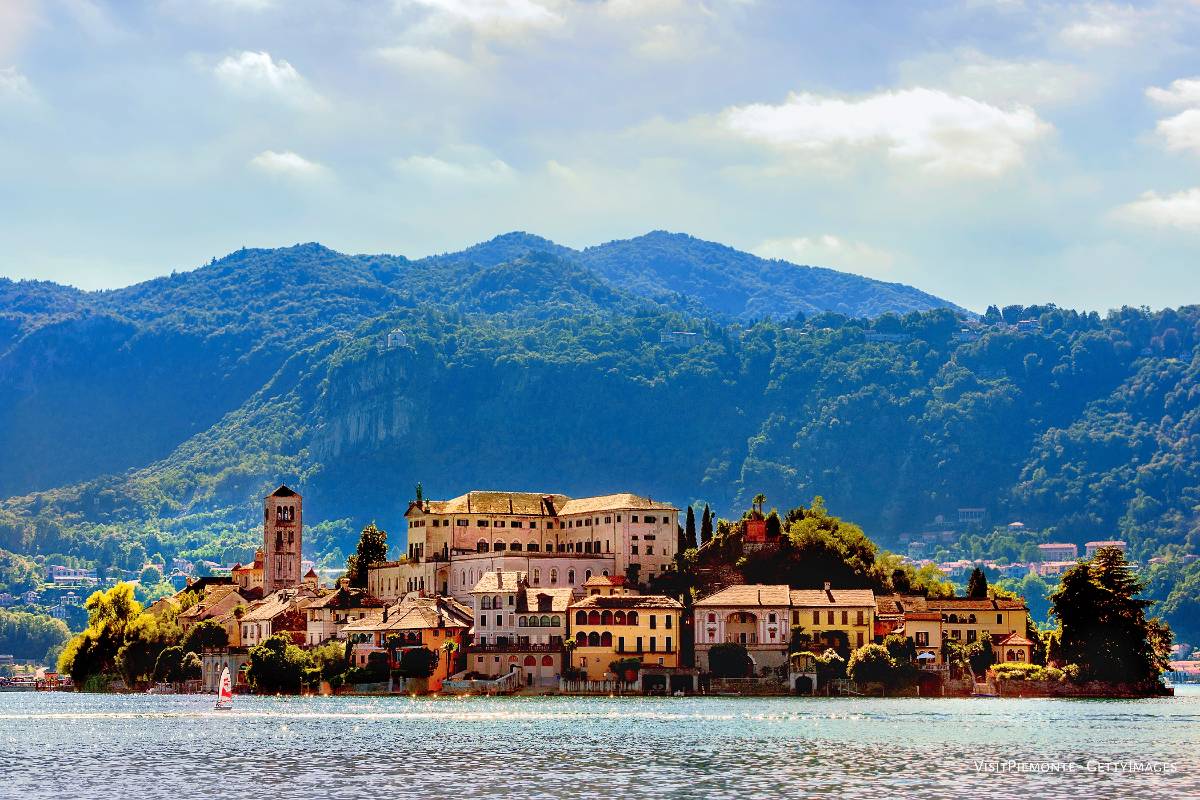 Vogogna in Verbano, nestled in green mountain landscapes between Lake Maggiore and Lake Orta and in the Valgrande National Park, Italy's largest wilderness area. Its narrow alleyways, stone houses with wooden balconies convey a magical tranquillity, with rich historical evidence including the Visconti Castle with the Chiseller Museum.
The Ricetto di Candelo, near Biella, represents an almost unique case of preservation of a fortified medieval structure. 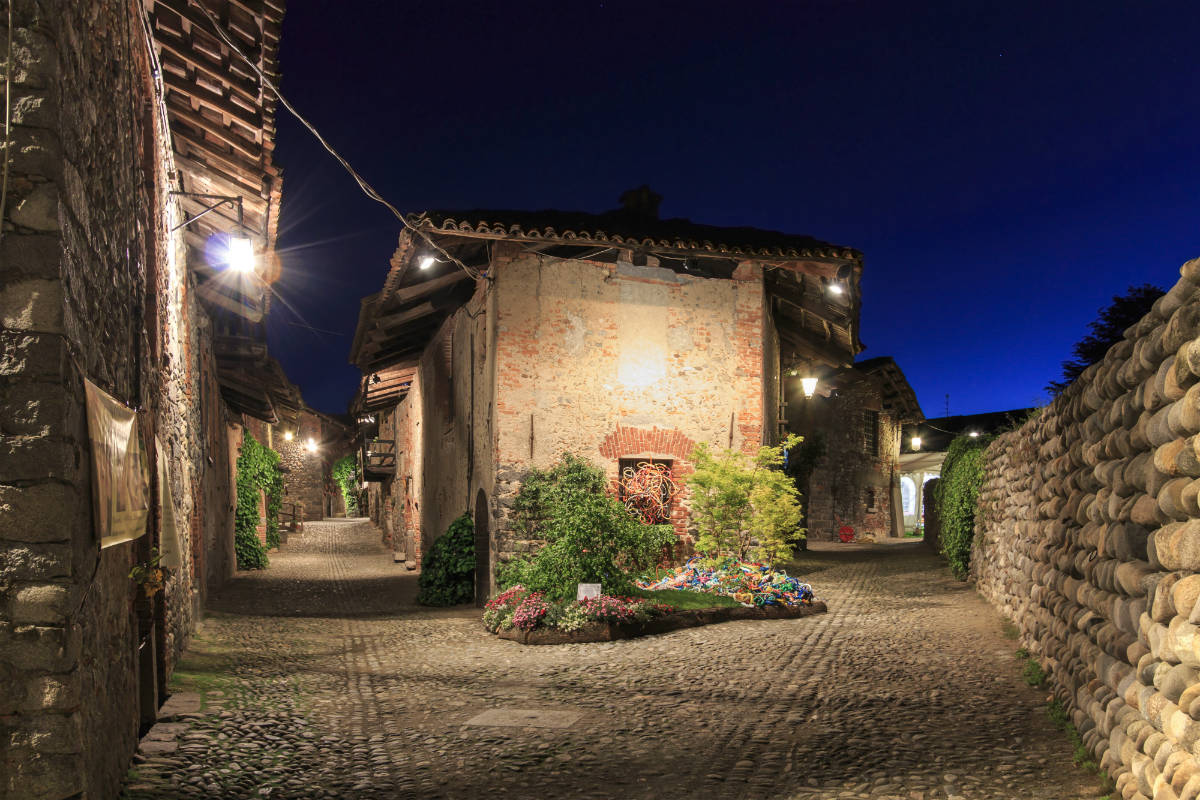 In the province of Alessandria: Volpedo, the birthplace of Pellizza da Volpedo - a great artist who lived between the 19th and 20th centuries - boasts a charm of ancient agricultural vocation. Cella Monte, nestled in the hills of Barbera, Grignolino and Freisa, has among its attractions the famous "Infernot" - elements of the UNESCO Langhe-Roero and Monferrato wine landscape - dug into the sandstone to preserve the most precious bottles. Garbagna, a village of medieval origin, bears the strong imprint of nearby Liguria and is home to the homonymous cherry, a Slowfood presidium.
The Astigiano area, on the other hand, presents its acknowledged beauties between Cocconato and Mombaldone. The former, with its panoramic views and lush landscape, is famous for its robiola cheese and enjoys a microclimate similar to that of the "Riviera del Monferrato"; the latter is a medieval jewel with details waiting to be discovered and woods rich in mushrooms and truffles. 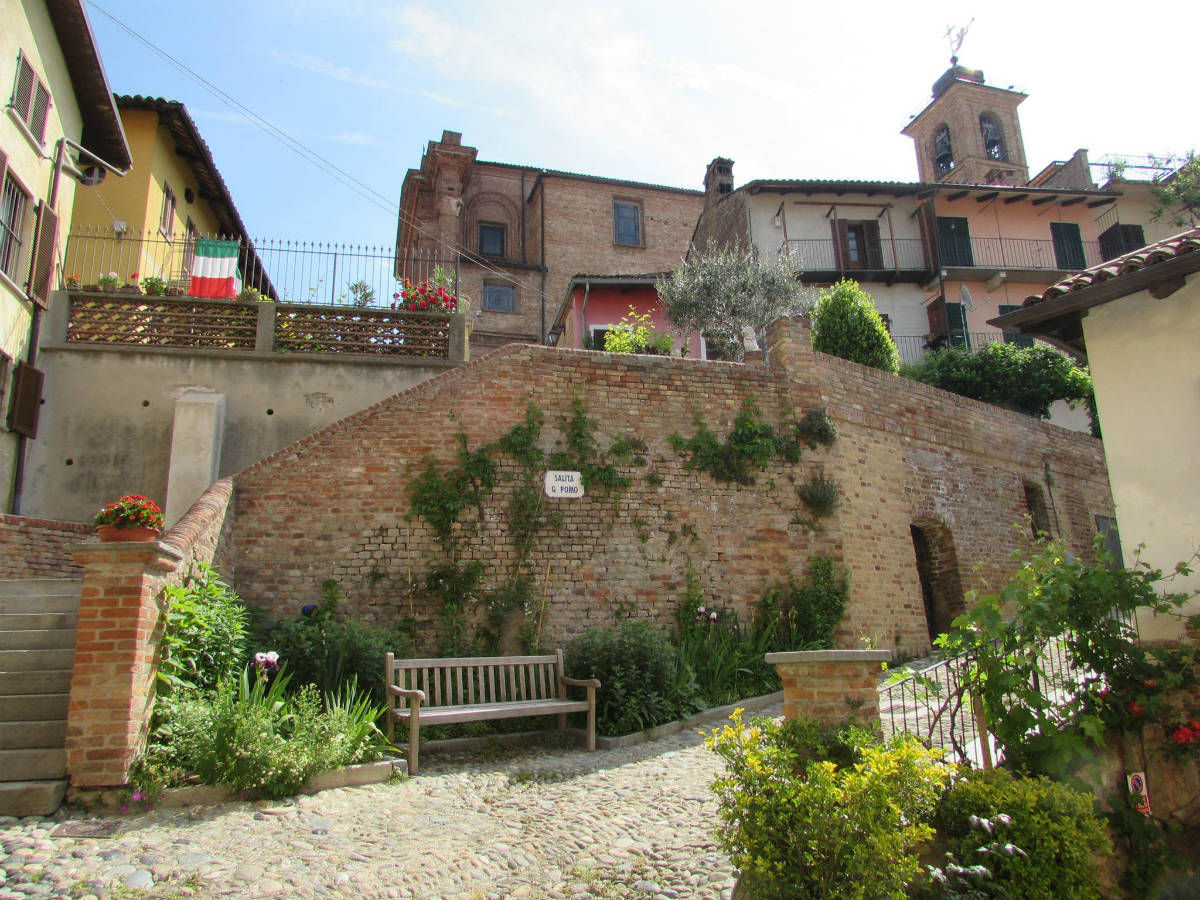 In Garessio, in the province of Cuneo, the scent of the sea can already be smelled, amidst historical monuments, dozens of footpaths and a ski resort with a view of the Ligurian gulf. Monforte d'Alba, at the heart of the UNESCO World Heritage wine landscapes, boasts a carefully developed historic centre, as does Neive, perched among vineyards of Barbaresco, Moscato d'Asti, Barbera and Dolcetto d'Alba and the kingdom of hazelnuts. 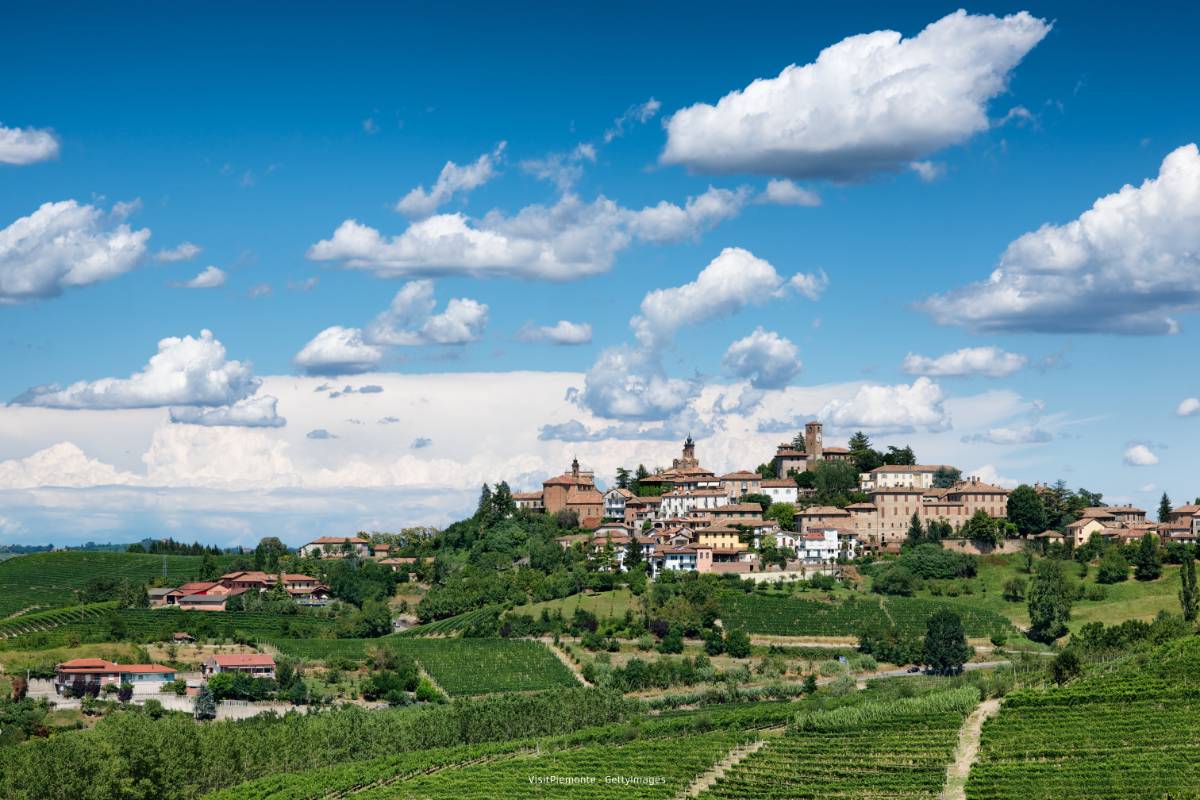 Located on different slopes of Monviso, Ostana and Chianale jealously preserve their Occitan language, cuisine, traditions and architecture. A few valleys further north, the village of Usseaux (To) is made up of five alpine villages and is famous for its painted sundials. 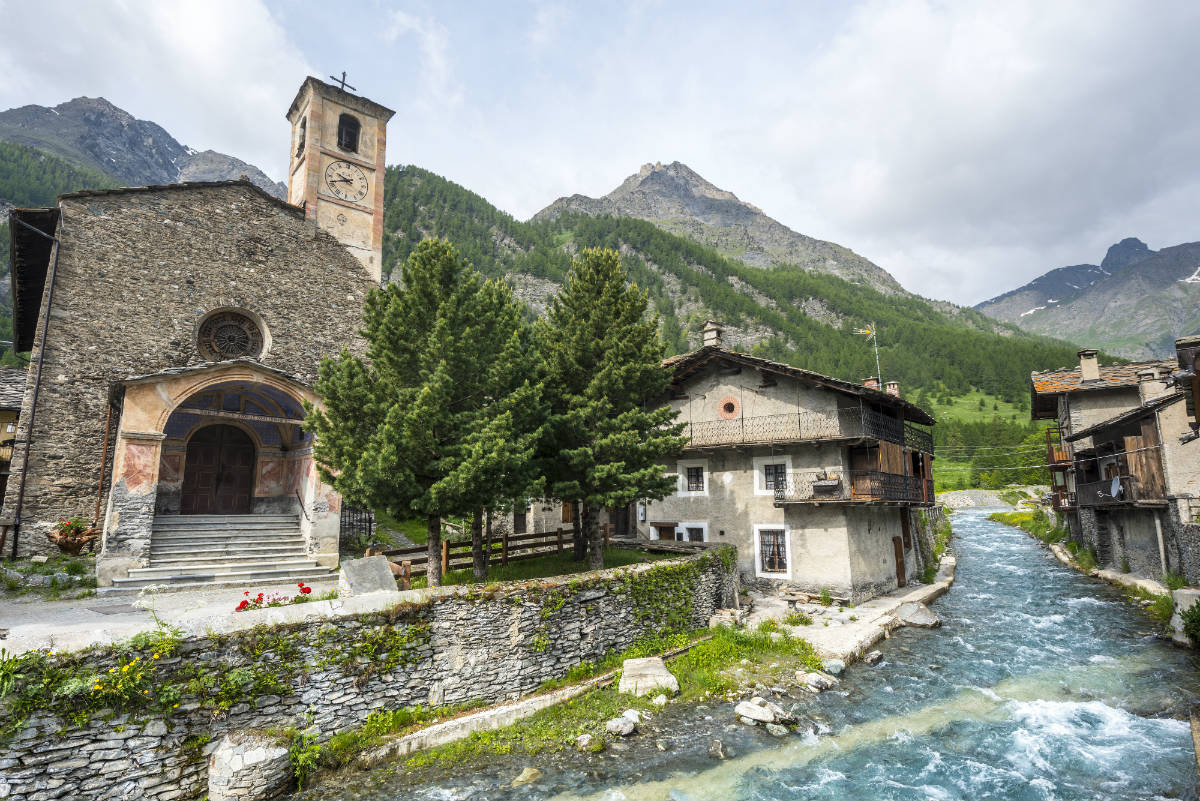 Piedmont's Bandiera Arancione villages
Not only cultural and historical heritage, but also the quality of tourism and the environment: these are the excellent inland villages that have been awarded the Italian Touring Club's Orange Flag. In Piedmont, the above-mentioned Candelo, Cocconato, Monforte d'Alba, Neive, Orta San Giulio, Usseaux and Vogogna, as well as 26 other small towns, can boast it. In the province of Turin: Agliè, with its famous Ducal Castle; Avigliana, with its two lakes; Fenestrelle, with its fortress known as "the great Piedmontese wall"; Usseglio, a mountain resort in the Lanzo Valleys, home to winter sports and the Alpine cheese fair. In the Alessandria area: the Roman Bene Vagienna; Gavi, home to the mighty fortress and land of Cortese DOCG vineyards; Ozzano Monferrato, with its tufa cellars known as "Infernot". 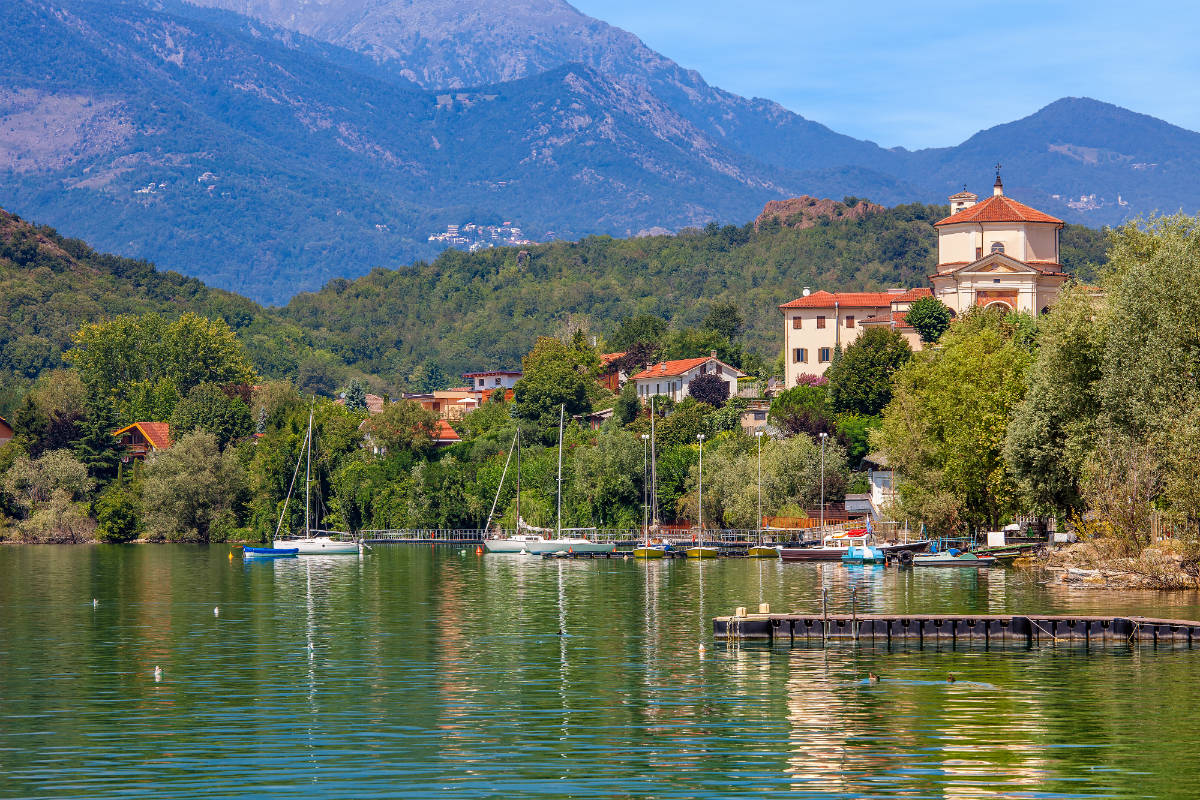 In the province of Asti: Moncalvo, a centre of important churches, historical buildings and artistic evidence. The Cuneo and Verbano-Cusio-Ossola villages are densely packed. In the heart of the Langhe and the UNESCO World Heritage wine landscapes: Barolo, Grinzane Cavour, Guarene, La Morra, Bergolo; Cherasco with its beautiful Baroque buildings; the mountain villages of Chiusa Pesio, Entracque and Limone Piemonte. 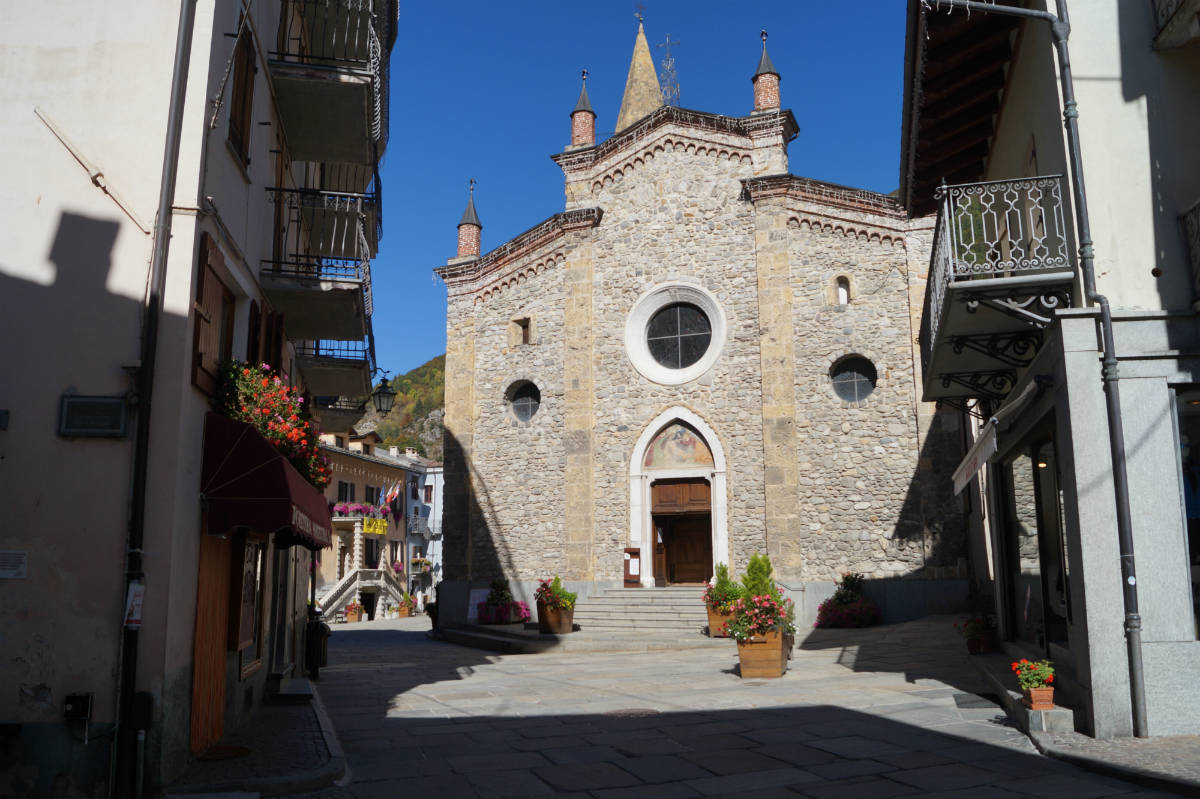 In the second group: Arona, Cannero and Cannobio on Lake Maggiore, rich in natural beauty and scenery; Malesco, Mergozzo, Santa Maria Maggiore in the picturesque Ossola Valley. In the Vercelli area: Varallo Sesia, with its extraordinary Sacro Monte; Alagna Valsesia and Macugnaga, guardians of the ancient Walser culture and Fobello, in the Alta Valsesia Park, with its important traditions and natural beauty. 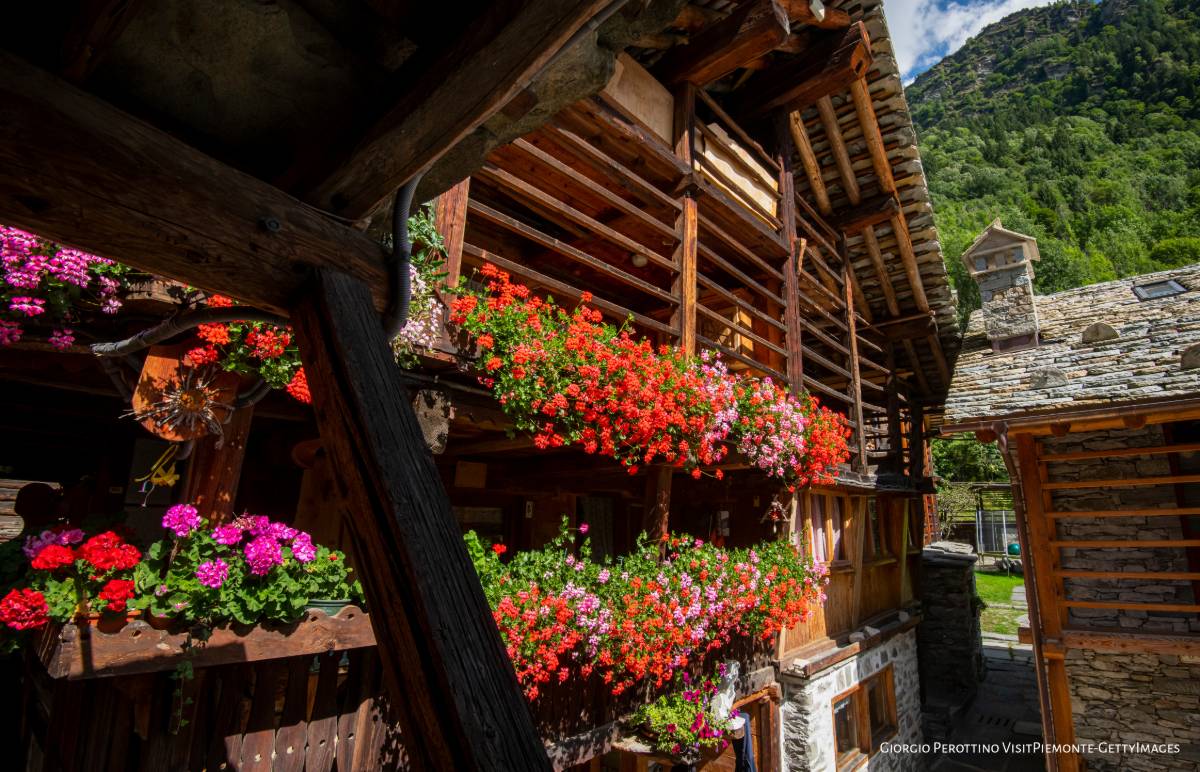 Piedmontese Villages “Spighe Verdi“
The Spighe Verdi (Green ears) award is given by the Foundation for Environmental Education and Confagricoltura (Italian Farmers' Association) to Italian towns that stand out not only for the quality of their tourist offerings but also for their sustainable rural development and accessibility. It has been awarded to the aforementioned Monforte d'Alba (CN) and Volpedo (AL), as well as Pralormo in the province of Turin, Santo Stefano Belbo and Canelli in the province of Cuneo, prestigious wine-growing areas in the middle of UNESCO landscapes. 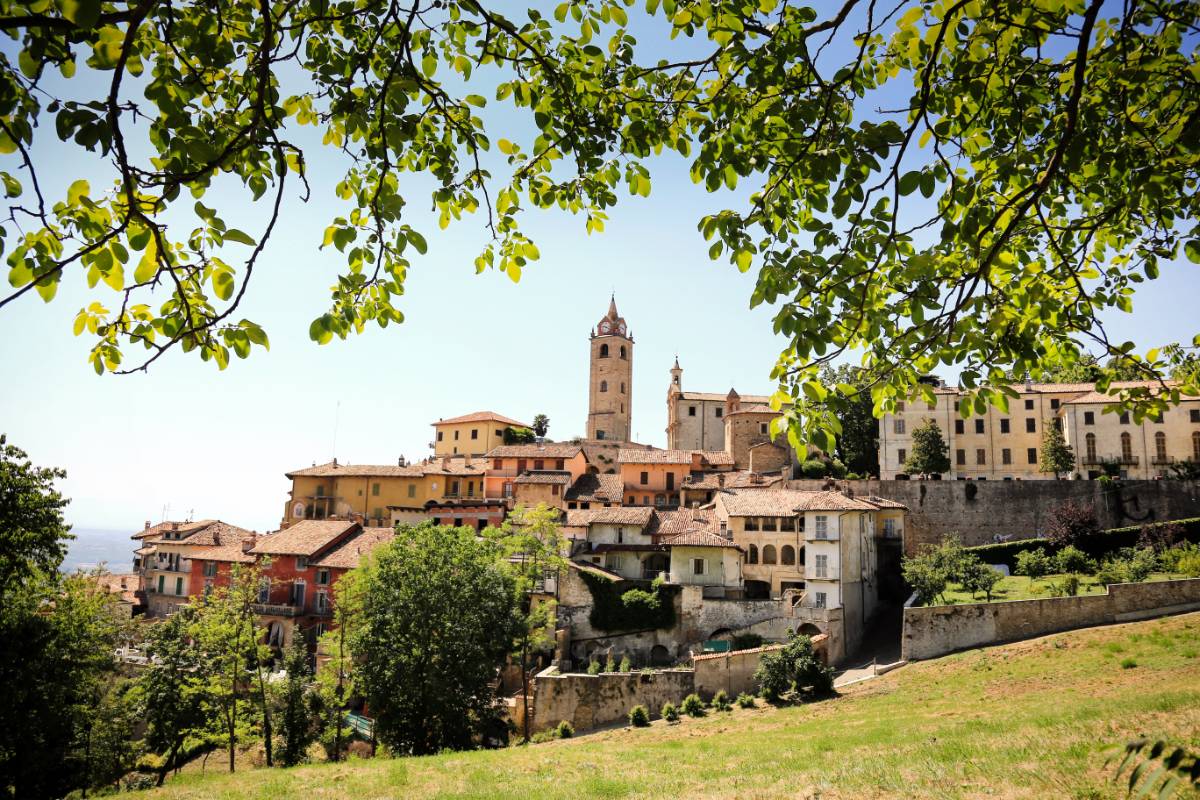 Villages and Food & Wine, Autumn Treasures
In the Piedmontese villages, among typical trattorias and Michelin-starred restaurants (there are 46 throughout the region), you can taste real autumn treasures. All you have to do is follow the aromas of the vineyard and the woods; of truffles, mushrooms, grapes, peppers, chestnuts and hazelnuts. The quality of the products is great: the inimitable White Truffle of Alba, the rice grown in the largest rice fields in Europe, between Biella, Novara and Vercelli; the PDO artisan cheeses such as Castelmagno and Toma, Robiola di Roccaverano Raschera, Murazzano, Ossolano and Gorgonzola and the more than 370 traditional food products. 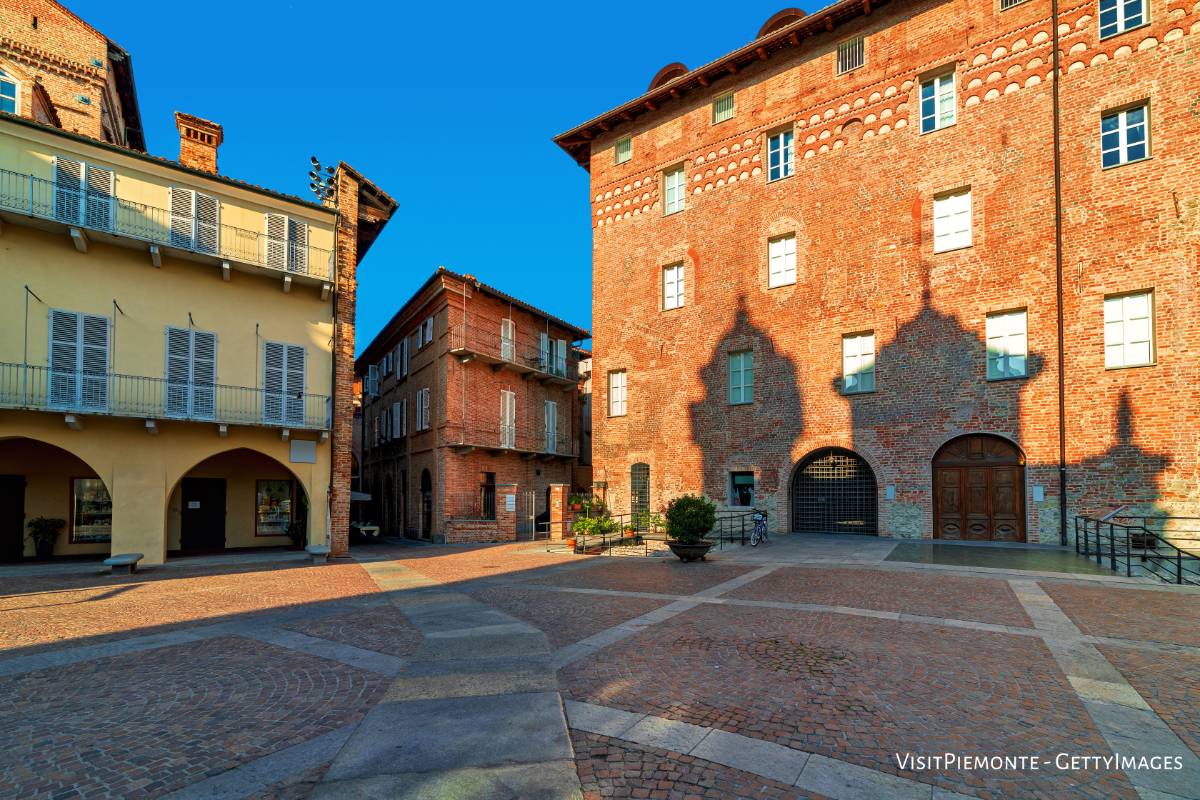 There are 18,000 wineries where you can discover the Piedmontese wine heritage of 17 DOCG and 42 DOC (many produced in the UNESCO "Langhe, Roero Monferrato Wine Landscapes"), such as the noble reds Barolo and Barbaresco or the whites Arneis and Moscato d'Asti. Among the top events are "Terra Madre Salone del Gusto", with a special edition of initiatives from 8 October to April 2021; the 90th International Fair and World Market of the White Truffle of Alba, which from 10 October to 4 December will enliven the "capital" of the Langhe and UNESCO Creative City for Gastronomy, and the numerous autumn truffle fairs held in the Langhe Monferrato and Roero area.. 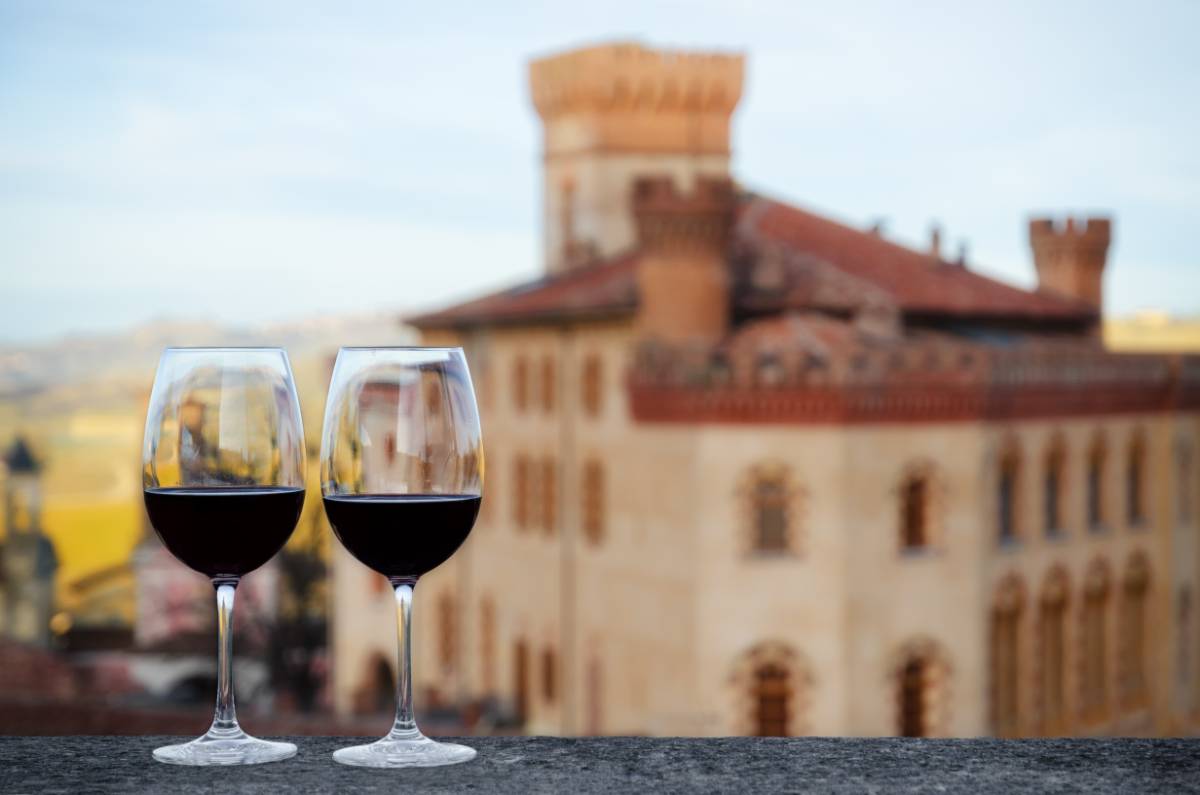 Farmhouse La Desiderata
A lovely location featuring a beautiful garden with terrace among the hills of Piedmont, in Agliè

Strada per Feletto, 2, Agliè
MH Olen Boutique Hotel
Located 15 meters from the ski lifts in the typical mountain setting of the hamlet of Bonda in Al...

Strada Casale n.15 - 14036, Moncalvo
MIRA Alagna Mountain Resort & SPA
The ideal hotel for indulging in outdoor sports and wellness in the small and precious village of...

Via A. Giovanola, 75, Cannobio
B&B Mimosa
A lovely property located in Candelo and a stone's throw from the Ricetto di Candelo, one of the ...

Via Pietro Micca, 36 - 13878, Ricetto di Candelo
Langhe Country House
In the UNESCO Heritage Sites, you will find the right place for a relaxing and warming holiday.

Via Pallareto, 15, Neive
Hotel Ristorante Bocciolo
Just a few meters from the shore, a restructured farm hosts the Bocciolo since 1987.

Via Panoramica, 24, Orta San Giulio
Hotel San Rocco New Classi Hydrogen Hotel
On the shores of the magical Lake Orta, the Hotel San Rocco is known for its care in organising s...

Via XIV Marzo, 70 , Garbagna
B&B Gilda e i suoi Amici
Bed and Breakfast “Gilda e i suoi amici” is located in Neive, one of the most beautiful villages ...

Via Santa Maria del Piano 77 , Neive
Rifugio Galaberna
At the Galaberna refuge we try to create the right atmosphere for you to relax in thanks to a fri...

Piazza Italia, 23 , Neive
Massimo Rivetti Farm
Rivetti Family makes wine from five generations: the farm in the fraction of Froi, in the village...

What to see in Alagna Valsesia

Walser Museum
More...
are you an Italian villages lover?
Join our Community
and share you experiences!

The 5 most beautiful and unknown places in the ...
A day at Civita di Bagnoregio and Bomarzo - from 260 €
Val di Fiemme, spring opens up new scenarios