The Way of Etruria: from Volterra to Chiusi, 12 exciting stages in the footsteps of the greatest pre-Roman civilisation

A route that crosses medieval villages, archaeological sites and the typical landscapes of the Crete Senesi, Montagnola, Val di Merse and Val d'Elsa, joining in many places with paths such as the Via Francigena, the Via Lauretana and the Tuscan Hiking Network. 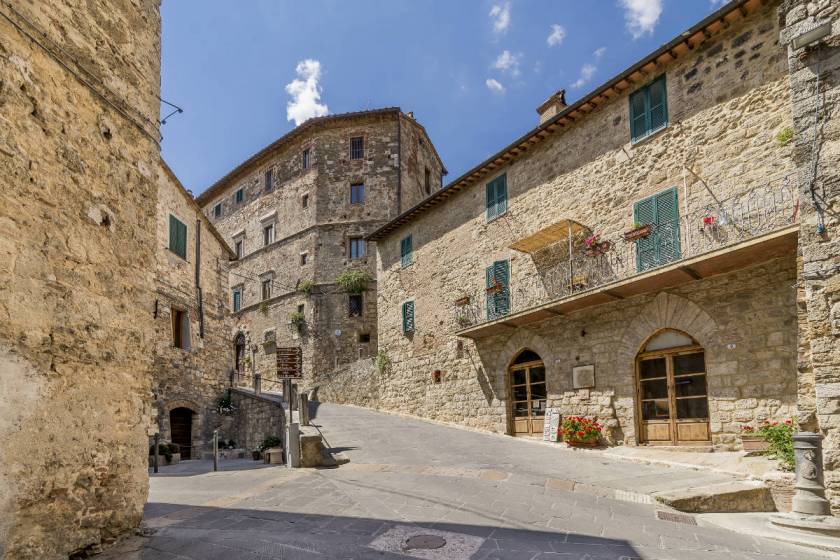 When one thinks of the great civilisations of Italy's past, the Romans immediately come to mind; yet not everyone knows that this glorious people, who dominated the world for centuries, drew much from another civilisation that excelled on Italian soil: the Etruscans. They occupied a vast territory stretching from the river Arno to the Tiber, encompassing the current regions of Tuscany, Lazio and Umbria. They founded eleven major centres that formed part of the Dodecapolis and even today these cities preserve indelible memories of Etruscan power, especially the necropolis, including those of Populonia, Cerveteri and Tarquinia.
Those wishing to learn more about this great pre-Roman civilisation can organise a tour along the Cammino d'Etruria, which links Volterra to Chiusi in 12 exciting stages.

The Etruscan Way: starting from Volterra

The Cammino d'Etruria mostly takes you along secondary roads and country lanes, well away from traffic and immersed in a bucolic atmosphere where the splendours of a distant and fascinating past still echo. We start in Volterra, the town of Twilight vampires and alabaster, located in the heart of the Maremma Pisana. The Etruscans in Volterra can be seen in part in the city walls, in Porta Diana and Porta dell'Arco, built between the 4th and 3rd centuries BC, but above all in the small Acropolis where the remains of Etruscan warehouses and places of worship are visible. A visit to the Guarnacci Etruscan Museum is a must, where the Stele of Avile Tite, the Urn of the Bride and Groom in terracotta and a slender sculpture from 2300 years ago nicknamed by D'Annunzio "L'ombra della sera" (The Shadow of the Evening) are particularly well preserved. 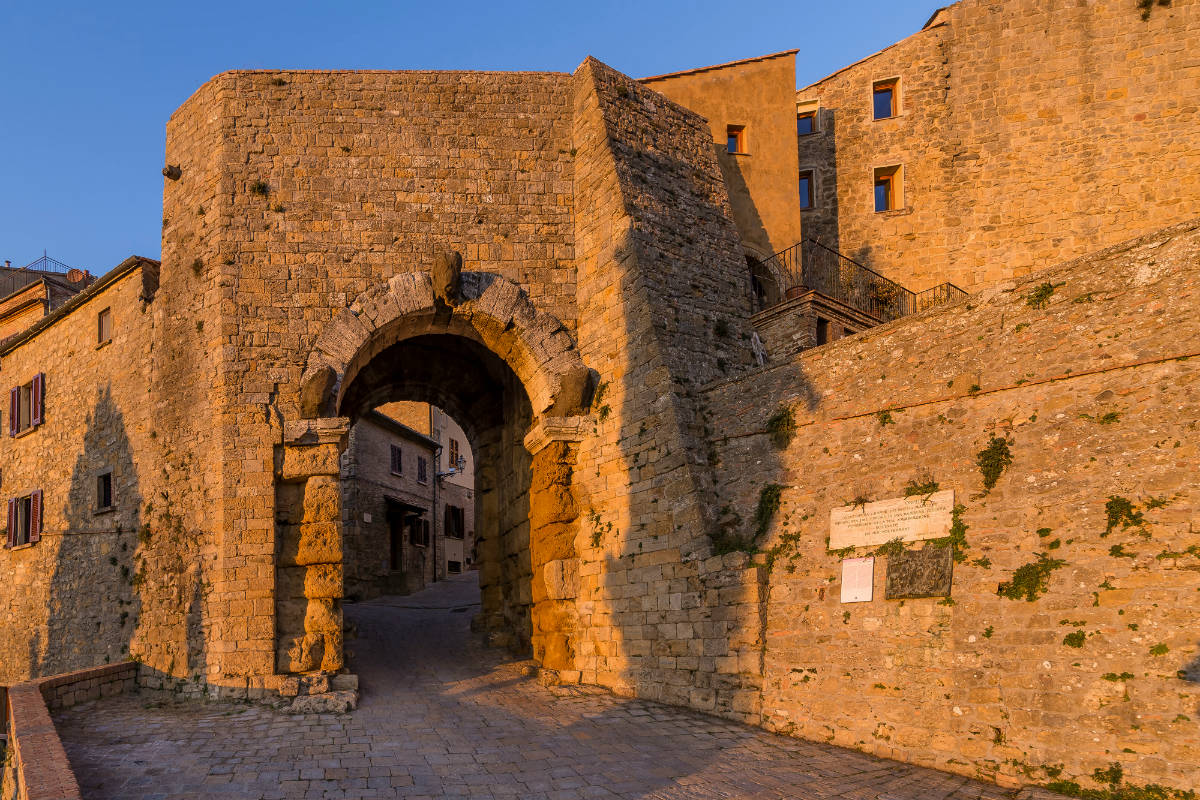 The first stage ends in Casole d'Elsa, an ancient village of Etruscan origin located in the picturesque hilly area of the Montagnola Senese. The mid-14th-century fortress dominates the town with its circular towers and houses the interesting ArteViva Art Gallery. The Collegiate Church of Santa Maria Assunta, dating back to 1161, houses a 16th-century baptismal font, paintings from the 14th century and a splendid glazed terracotta by Della Robbia. The Archaeological Museum contains Etruscan and other artefacts, such as a marble head of a Greek deity. 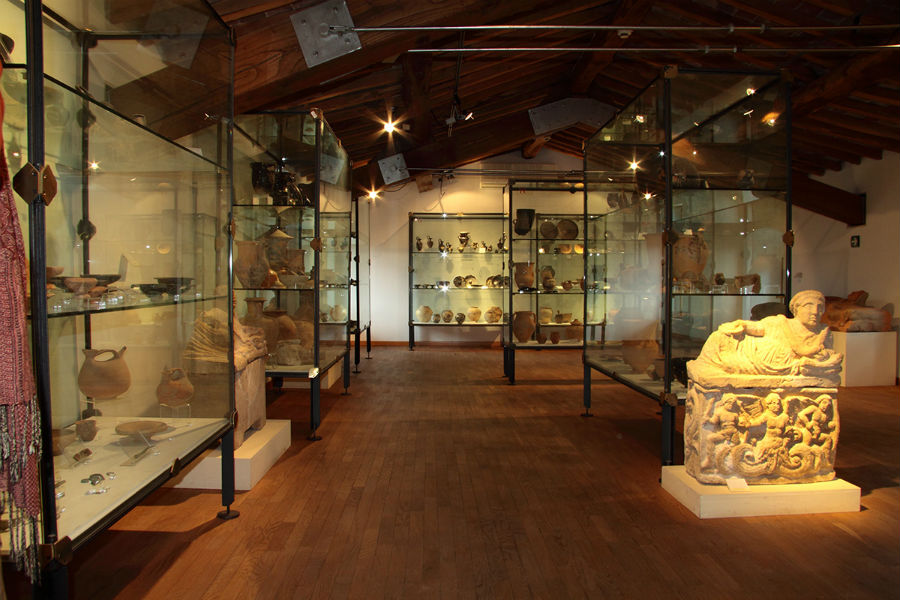 The second and third stages involve passing through the villages of Sovicille and Monteroni d'Arbia before reaching the town of Murlo, the destination of the fifth stage of the Cammino d'Etruria. Awarded the Orange Flag by the Touring Club of Italy, Murlo revolves around its medieval castle with views of the Colline Metallifere and the Crete Senesi. A stop in Murlo allows you to visit the Antiquarium of Poggio Civitate, located inside the Palazzo del Vescovo: here are preserved objects of daily life, bronzes, ceramics, decorated terracotta slabs from luxurious Etruscan dwellings from the 7th-6th centuries BC and, above all, a mysterious sculpture depicting a man with a large hat on his head. 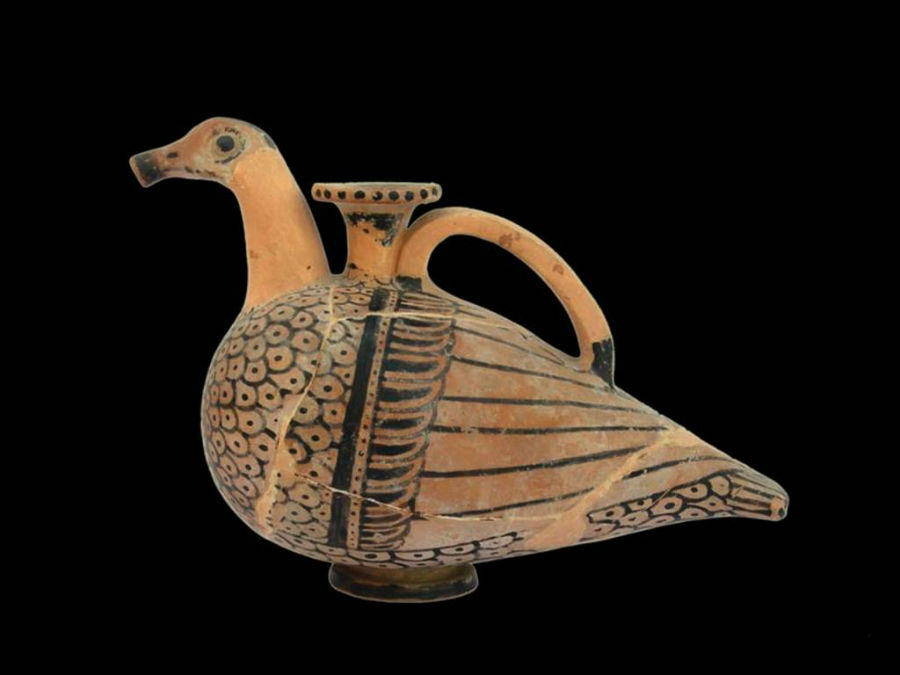 From Buonconvento to Chiusi

The sixth stage of this walk in the footsteps of the Etruscans reaches one of the most beautiful villages in Italy, Buonconvento, situated in the Ombrone Valley in the heart of the Crete Senesi. Its history is intertwined with the tragic story of Henry VII, who in 1313 was poisoned inside the Church of Saints Peter and Paul, dating back to 1100, while trying to resolve the diatribe between Ghibellines and Guelphs. The façade of the church is in red brick, as is almost the entirety of the picturesque old town, which also houses jewels such as Palazzo Taja with its characteristic wrought-iron balcony below a sundial, and the Museum of Sacred Art, which houses Duccio di Boninsegna's Madonna and Child. 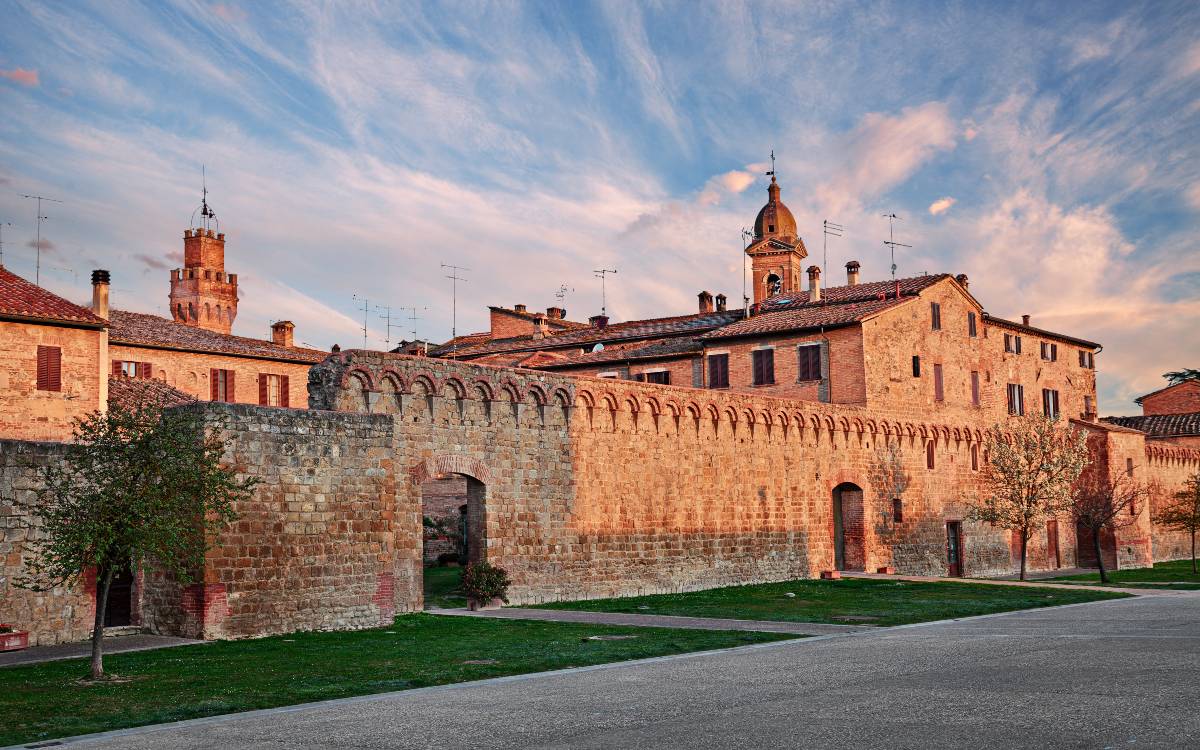 After passing Asciano, you reach Trequanda, whose first inhabitants were the Etruscans. Here you can admire the Church of Saints Andrew and Peter, which dates back to 1327. Its façade is striking for its chessboard made of travertine and tuff, while inside you can admire the Virgin and Child with Saints by Bartolomeo da Miranda. The Rocca di Trequanda is also worth a visit, with its crenellated walls, donjon and Italian-style garden within its walls, and then we move away from the centre to the 18th-century Torre del Molino, with its hundreds of terracotta nests on the walls to accommodate pigeons. 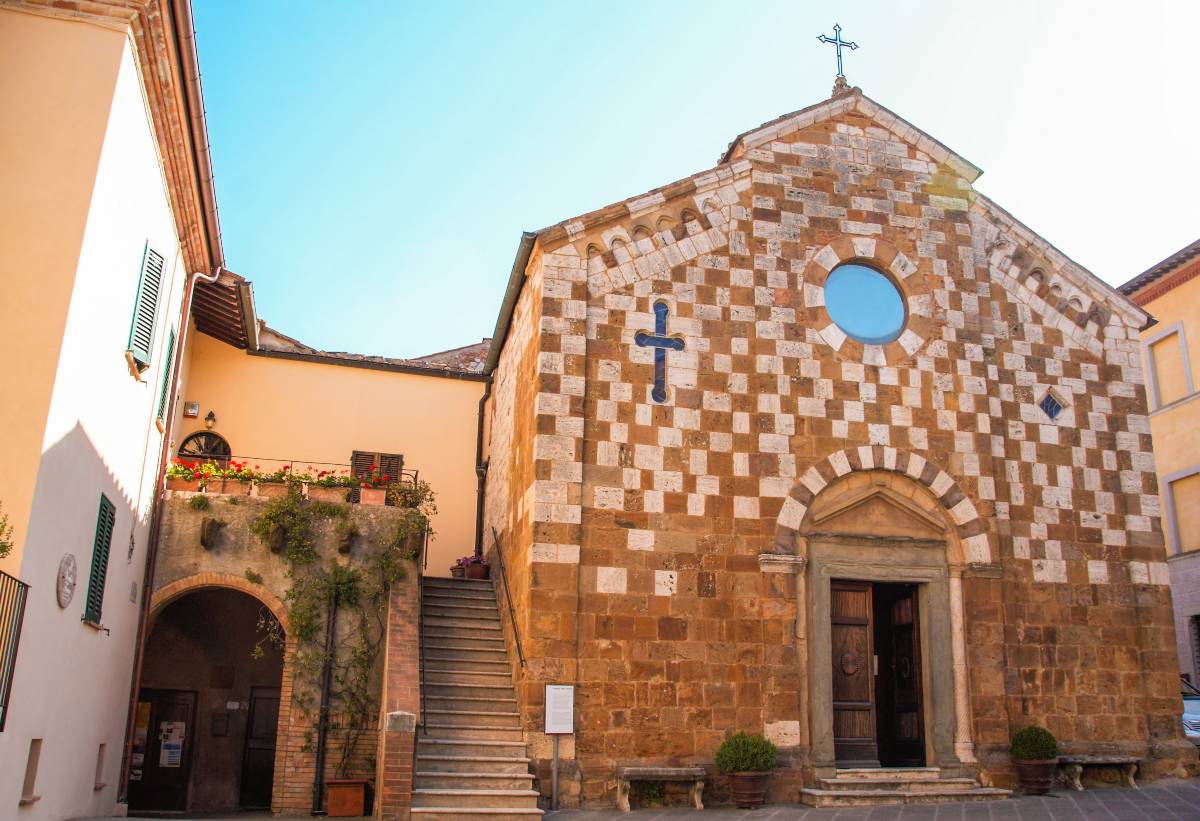 Church of St. Andrew and Paul

The ninth stage of the Cammino d'Etruria leads to beautiful Pienza, the village designed by the Piccolomini as an ideal Renaissance city. Its historic centre, declared a UNESCO World Heritage Site, is dotted with enchanting buildings such as the Duomo dell'Assunta flanked by the octagonal bell tower and the nearby Palazzo Piccolomini where Zeffirelli filmed some scenes of his 'Romeo and Juliet' and which includes a roof garden with breathtaking views over the Val d'Orcia and Monte Amiata. 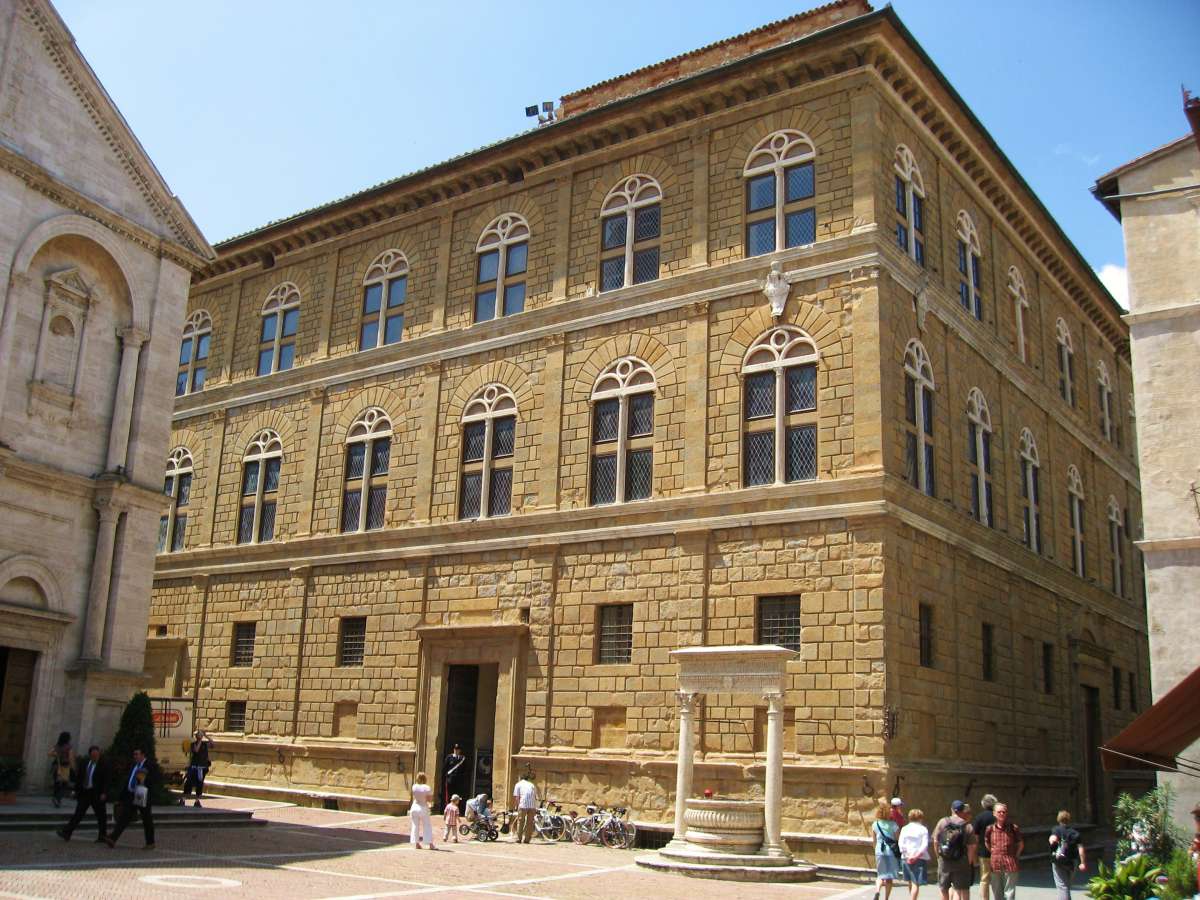 After Chianciano Terme, the arrival point of the tenth stage, we reach the villages of Sarteano and Chiusi, which bring this fantastic experience in ancient Etruria to a close.
In Sarteano, in the Palazzo Gabrielli, there is an interesting Civic Archaeological Museum where the Tomb of the Infernal Quadriga from the 4th century BC has been faithfully reconstructed, with a pictorial cycle narrating Etruscan thought on the afterlife. 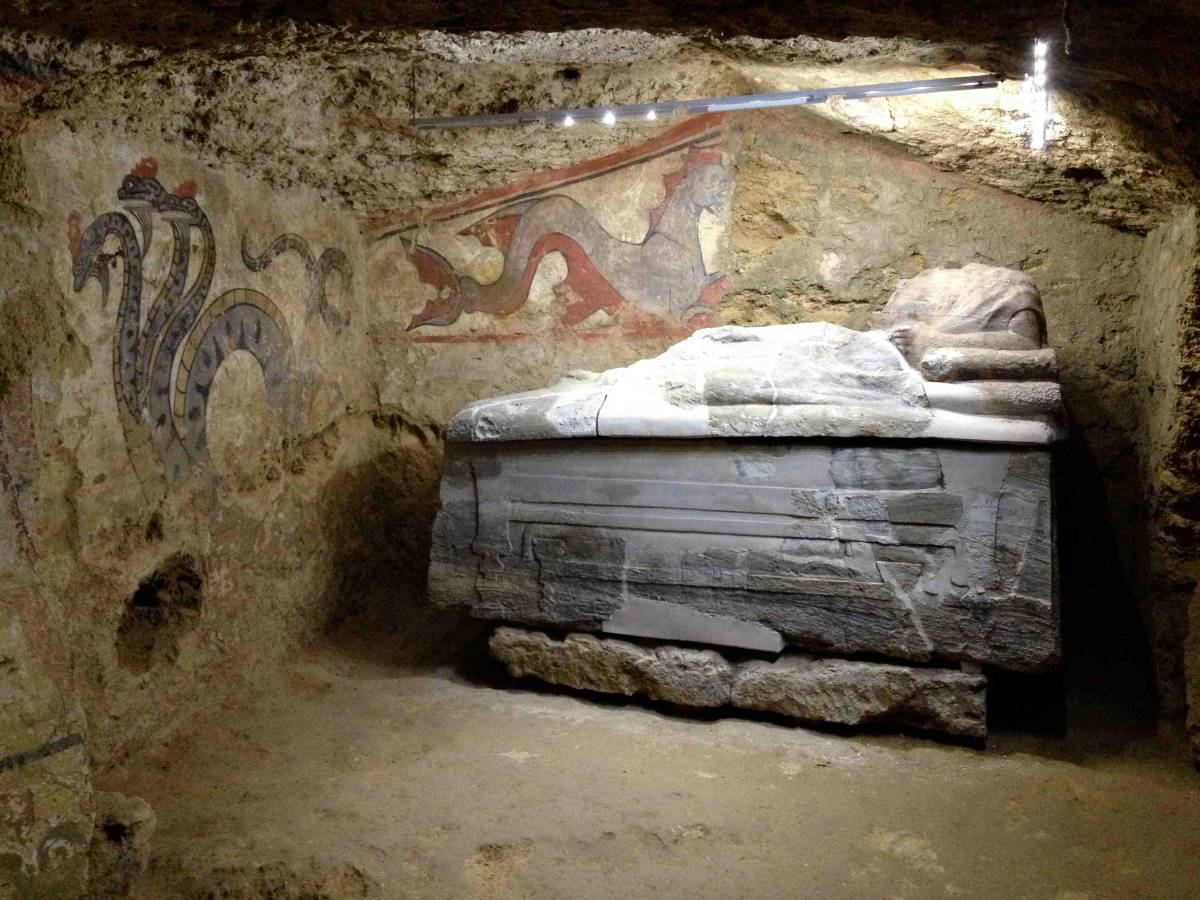 Finally, in the Valdichiana is Chiusi, one of the ancient cities of the Etruscan Dodecapolis, which reached its peak in the 6th century BC with King Porsenna. Chiusi is home to the not-to-be-missed National Etruscan Museum, which houses artefacts such as urns, votive statuettes, canopic jars and sarcophagi, such as the alabaster sarcophagus of Larth Sentinate Caesa from the Necropolis of Poggio Renzo. At the latter you can visit many of the most typical Etruscan burial mounds, in particular the Tomb of the Pilgrim from the Hellenistic period, the Tomb of the Lion and the Tomb of the Monkey. 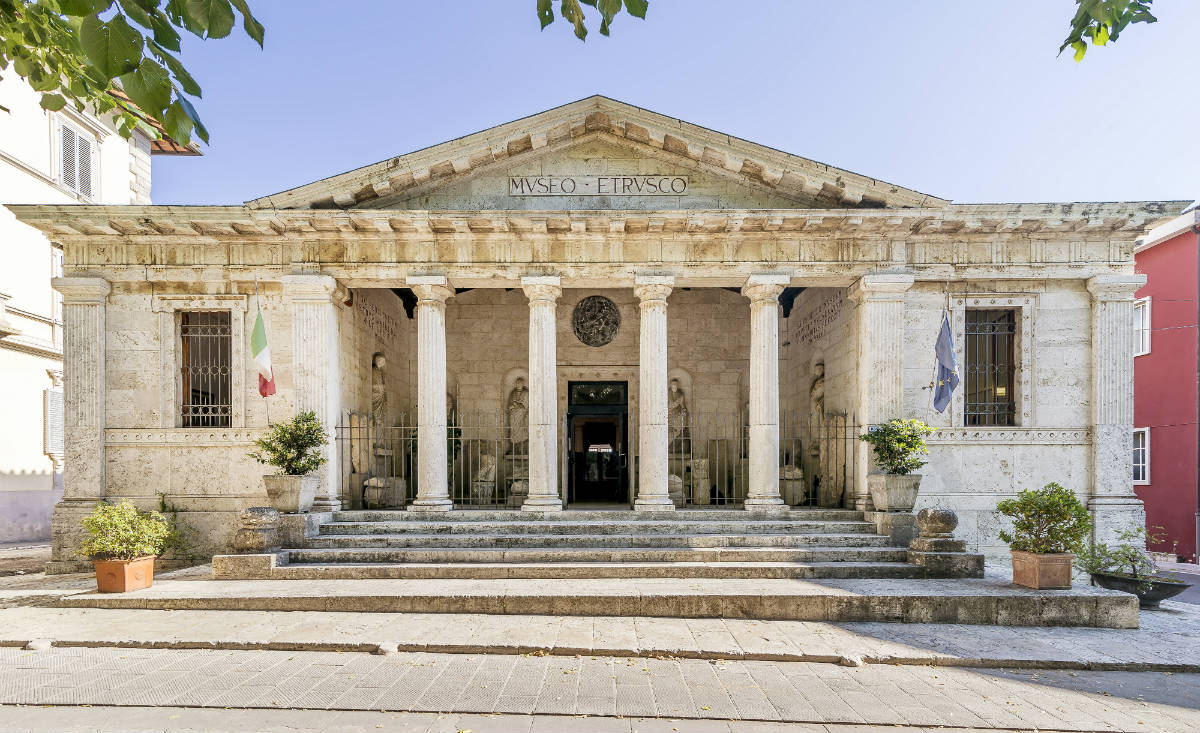 In the main photo, the village of Sarteano

What to see in Buonconvento

Museum of Senese Sharecropping
Church of Saints Peter and Paul
Parish Church of Santa Innocenza in Piana
More...
are you an Italian villages lover?
Join our Community
and share you experiences!