The legend of the Talami of Orsogna

It is celebrated twice a year, at Easter and in August, and while all of Italy is preparing for fireworks, barbecues and battles with water balloons, Orsogna is ready with its legendary Talami 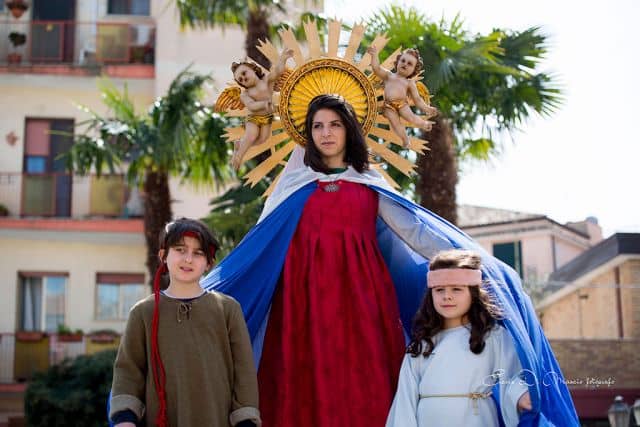 Orsgona, a village in the province of Chieti, Abruzzo, a place famous for its Talamis, sacred living representations, such as those living nativity scenes that gladden the hearts during the Christmas period. Looking for a curiosity for the event of mid-August I came across this peculiarity. A church and a mysterious painting, both destroyed during the war, and a tradition that is lost in the times that celebrates an expectation. The awaiting for a miracle.

This story begins along the viewpoint of the village of Orsogna, a place where, in ancient times, the villagers used to relax in the shade of a fig tree. Legend has it that one day, a figure of a woman, beautiful and sweet, appeared in that place, bewitching the few present with her kind and sacred manner. It was Mother Mary.

The figure, opening her arms, asked those present to build a monument to her and the villagers, spreading the word about the miraculous apparition, attracted a multitude of believers. Thus began the construction of the Church of the Blessed Madonna del Rifugio, right there, where the Madonna appeared, in the place of the Orsogna belvedere.

The legend continues attributing to San Luca the extraordinary painting placed on the apse, the Black Madonna, so called for its dark colors. Extraordinary, and miraculous, because some claim to have seen the face of the dark painting become clear, or to have seen the eyes move towards midnight ... Thus was born the feast of the Madonna del Rifugio.

Over the centuries, crowds of believers filled the small church waiting for the miracle, which seems to occur only during the Easter period. An advertisement read "The expectation of pleasure is pleasure itself", which fits this story up to a certain point. In fact, it is the expectation among believers that the figure of Our Lady reappeared among the peasants waiting in the form of Talamis.

The thalami are living biblical representations that run twice a year to the streets of Orsogna to bring to light that tradition and that miracle of devotion that represented the church and the miraculous painting. A devotion that can not but leave admiration for a time that was and for an unshakable faith. A faith that even misfortunes can not weaken.

This year, in Orsogna, it is certainly not an exception. Already the Talamis are ready to fascinate and surprise those lucky ones who will take part in the event tonight.

Whether you are in Orsogna or in any other village, well, happy Ferragosto.

What to see in Orsogna

Bene Tower
More...
are you an Italian villages lover?
Join our Community
and share you experiences!