A mysterious girl with a strong personality, an escape of love and a passion for a territory. An interweaving of history and legend... spread in taverns. 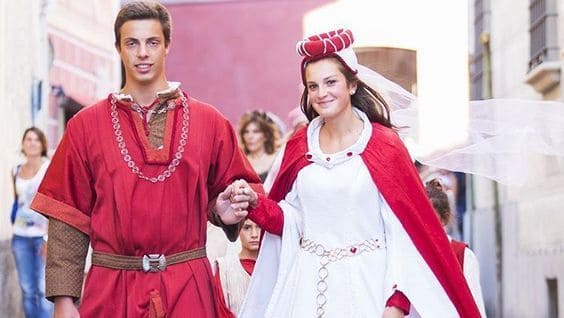 This is a story of which there are no written documents but many, far too many, historical references to persons and facts actually happened. Starting from the origins of the beautiful Gavina (or Gavia), or daughter of the Merovingio King, Clodomiro. In reality Clodomiro had three sons, Teobaldo, Guntari and Clodoaldo, and there is no document that speaks of a daughter but this could be the result of an illegitimate relationship, an "ius primae noctis", or an adoption, given the beauty and the grace of that child who wants legend has been the favorite daughter of the ruler, who boasted of the courage and determination of the young at the expense of the fearful and unsure nature of his children. In fact, at the death of his father, the three sons could not rule and the kingdom fell into the hands of uncles, Childeberto and Clotario. To save himself, one of the three sons became a friar, while the other two were "made to disappear".

But let's focus on the legend of Gavina and take a short step back in real history.
Clodomiro was the son of Crodoveo I, brother of Audofleda, wife of King Theodoric, cruel and war-mongering ruler of the lands of Ravenna after winning the self-proclamated King, Odoacer, of that decadent Roman empire. Theodoric was sent to those lands by the Ostrogoth emperor Zeno of Byzantium.

They were agitated times. Times when a coup and a powerful army were enough to lose power. Where these were not guaranteed, alliances were seeked.
It was precisely for this reason that Clodomiro had the opportunity to let the beautiful Gavina to enter the court of Theodoric, first as a damsel, and then, he hoped, as the bride of one of his descendants. This marriage would have guaranteed a solid alliance but things did not go as planned. It is important to note that during those days at Theodoric's court, Gavina came very close to the figure of the king's daughter, her aunt Amalasunta. The two got along very well and shared the way they saw life.

Gavina, who was a girl not only very beautiful but with a strong personality, did not accept her father's intentions and was in love with Philipe, a handsome and fallen nobleman who at that time lived in Clodomiro's court. Gavina had decided that Philipe would be the man of her life and decided that the only way to realize her dream of love was to escape.

It was certainly not the money that was the beautiful princess needed, but for security she took more from the family's treasure chests and, corrupted a stable boy, put her plan into practice. One evening, unbeknownst to everyone, she escaped with her beloved Philipe. Leaving the castle of Orlèans, with a small caravan that carried the most expensive objects, the clothes and the treasure, the two crossed the Alps in the direction of the Mediterranean coast but arrived in Val Lemme, Gavina was fascinated by that hilly place so sweet and particular.

There was a rise that dominated a nameless little town and on this there were walls of an ancient Roman base. Gavina understood that it would not take too much effort to make this place her new home. The hill had a spring and the soil was fertile. Gavina took care of the new house, graced and improved it, and kept the relationships with the population of the village for which she nurtured affection, so much to call it "mon cherie". Perhaps it was this nice nickname that gave the name to the central village of Gavi, "Monserito".

Over time, the attraction between Gavina and Philipe diminished and the noble revealed his scarce personality, passing his days in taverns, where he not only told his story, putting his coins in plain sight, but accepting the company of varoius females. It was from the rumors of the people born in these taverns, which passed from mouth to mouth, more and more enriched with details, that the news of Gavina's new home reached the ears of the knights of King Clodomiro who had long been looking for the princess.

For fear of the King's punishment, which he knew of the presence of the knights, Philipe stole as much as he could to his partner and escaped, disappearing.

This did not matter to Gavina, she was far more worried about being discovered and getting ready for her father's wrath.

Having disappeared Philipe, Gavina had resumed the frienship with Aunt Amalasunta, who herself had remained alone after the death of her husband Eutaric. According to legend, the two women, both without a man, shared not only friendship and points of view.

It was thanks to the requests of Amalasunta, that Theodoric asked Clodomiro to forgive his daughter, who accepted and allowed her to remain in Italy. Perhaps Todorico also had other purposes in wanting Gavina to head that place. In fact, the position of the village represented a strategic crossroads of trade, and entrusting a person of proven friendship in a well fortified castle would have guaranteed not only its fruits but also a good defense against possible attacks from the Northwest. It would seem, in fact, that the Ostrogoth king helped Gavina build the castle and the mighty city walls around the village. The presence of a woman at the head of the fiefdom can also be seen in the grace of some architectural details of the fortified buildings and in the urban network of the place which had a feminine notion and an almost Provençal taste.

After Theodoric's death, the Ostrogothic kingdom passed into the hands of the very young son of Amalasunta, Atalaric, who died very young. Although she could not sit on the throne as a woman, Amalasunta decided to have her cousin Teodato sit beside her, believed by all to be her new husband. Teodato was instead already married but accepted the task not for a noble duty but for his personal aims. With deception he imprisoned Amalasunta, who then made her strangle.

Gavina, saddened by the death of her patron friend, reigned for a long time on her fief without the need or desire of a male figure, bringing a period of prosperity and peace.

There are no details on the death of Princess Gavina, nor writings that intertwine her life with the various historical figures of this story. There is instead a detail on the stone altar in the entrance hall of the castle, the place where Gavina seems to be buried. On this structure you can see the symbols of the three powers that then reigned over the village of Gavi: the emblem of the Guasco of Alessandria, the "biscione" of the Visconti of Milan and the cross of San Giorgio, of the Genoese Republic. May these symbols be there to pay tribute to the mysterious princess who, with her strength and determination, gave birth to this village?

What to see in Gavi

Sanctuary of Our Lady of the Guard
Fort of Gavi
More...
are you an Italian villages lover?
Join our Community
and share you experiences!