The legend of the love between Cristalda and Pizzomunno

One of the most popular legends of Gargano. A pure and unstoppable love, contrasted by some wicked sirens, which will be the protagonist of the song that Max Gazzè will present to the 68th Sanremo Music Festival. 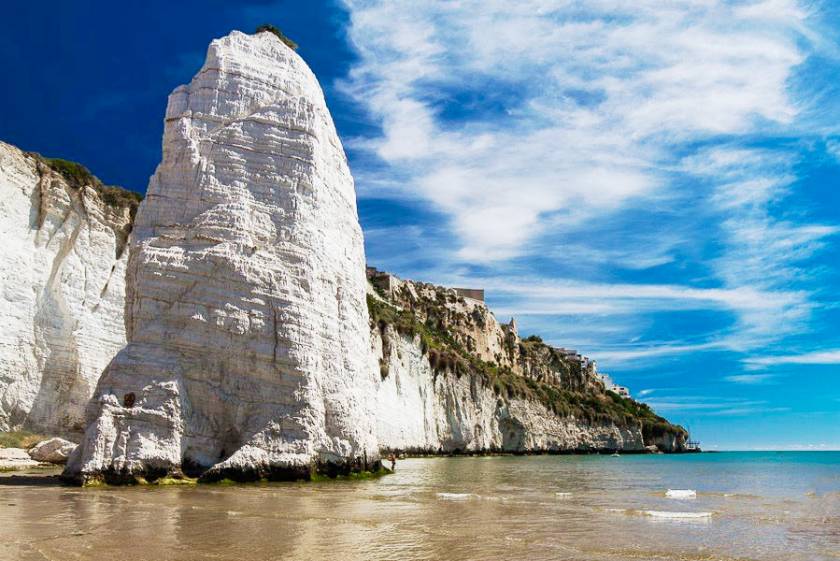 We are in Vieste, a beautiful village of the Apulia coast, where the crystalline sea kisses the sand of the beaches and the warm colors of sunset magically transform this earth, making it the ideal place for a heart breaking love story. Walking along the coast, perhaps hand in hand with the beloved person, we can't help remaining fascinated with the imposing white monolith known as Pizzomunno.

25 meters high, the Faraglione of Pizzomunno, stands out on the coast, proud and powerful, a presence in the dark nights, on which reflects the rays of the moon, almost as if it were inhabited by a luminescent soul, a ghost trapped and impetuous and at the same time powerless, static, desperate.

There are those who say that sometimes the monolith disappear inexplicably. There is those who convince themselves, sailing at night and not finding it, to be elsewhere and not in front of Vieste, while also knowing the coast by heart. A mysterious fact, which could instead have a explanation to its being or not being… there.

In ancient times the population of Vieste was mostly composed of fishermen, who lived in huts at the limit of the sea in order to facilitate the transport of fish from their boats. Among these fishermen, stood out for his strength and beauty and force, the young Pizzomunno. All the girls of the village had no eyes and attentions that for him.

High, fascinating, good mood, was not enticed by the courtship of his peers. His heart was only for the sea, that every day he sailed with his boat and for Cristalda, the most beautiful in the village: blond hair as the sun, the skin color of roses and the eyes of the color of the sea.

Also the heart of the young girl was only for him. She loves him in return, a pure feeling. The two were seen to cuddling and kissing on the shore every evening. When Pizzomunno fell with his boat the young man was already them to wait.

An indissoluble love that aroused envy in the girls of the village ... and not only.

During its fishing trips, in fact, Pizzomunno had to face many other dangers in addition to the strength of the sea and its waves. Every day, ammaliate from its beauty, a group of sirens sought to enticed Pizzomunno with their songs, promising to become its serves to give them eternal life and to make the king of their magical realm. But the love that bound the young to Cristalda was so strong to resist the pitfalls of sirens and always return home safe and sound. His passion for the girl was so powerful that the efforts of those charming sirens were vain, he was deaf to their voices, blind and indifferent to the beauty of their naked bodies who generously showed him between the waves, to seduce, provoke him, take him for ever. And to their temptations, Pizzomunno replied that his love for Cristalda could not finish, even after death.

When he was sitting on the beach embraced a Cristalda, looking toward the sea during the calm summer nights, only to hear the distant song of the sirens Pizzomunno laughed, mocking them. But you can't mock the wrath of a siren, you can only be afraid of it.

Rejected, feeling that the cocky Pizzomunno always frustrated their efforts to seduce him, the sirens decided that his outrage, his love so pure, has got to be punished. Resolute and scornful, after being consulted, they planned a terrible revenge, to put forever the word end to the love between the two lovers.

A night that it seemed like all other the two lovers were by the sea watching the stars, unaware of the danger that soon there would be shot down on them. The sirens came and with a jerk, they violently grab Cristalda, stealing her from his arms, chaining her uo and dragging her with them at the bottom of the sea.

In vain Pizzomunno launched himself in pursuit of sirens but the concern and tiredness gradually dried its strength out. The desperation for losing Cristalda attacked him and turned him to stone... locked, inanimate... transformed forever on that imposing faraglione in front of the beach of Vieste. At the sight of her beloved one into a huge and static rock, Cristalda wept, and there are those who say that she was tunrned into a pink coral, which from the top tears and laments comes out.

The sudden transformation of the young and the distraught tears of Cristalda struck deeply the sirens, which became aware of the pain they caused and the strength of such a love touched them. Despite being able to separate them, every thing on the beach was permeated with that force, from the sea to the sand all continued to talk about them. Thus the sirens allow them to be reunited again, but for only one night, every hundred years.

Since then every hundred years, and for one night only, Pizzomunno returns human and Cristalda emerges from the depths of the sea, in such a manner as to be able to re-embrace and love on their beloved beach.

If passing from the beach in the night of 15 August (someone says) it seems that Pizzomunno is not where it should be, then it means that's a night of love, compassion and passion; a special night in which the two spliced lovers lying again together, aware that at dawn they will return to be divided for a hundred years again.

This legend, that will be sing by Max Gazzè during the 68th edition of the Festival of Sanremo, contains a less known variant. It says that also Cristalda was a siren and her love with Pizzomunno provoked the envy and indignation of her sisters which, jealous of her fortune, transformed the young man into a rock, allowing the two lovers to be reunited for only one night every hundred years. The Faraglione of Pizzomunno is also linked to another peculiarity: it says that when turning around the boulder and making a wish, it will come true.

This story gives us the opportunity to congratulate to Max Gazzè, his brother Francesco and the well-known author Francesco De Benedettis (co-authors of the text of the song), and appreciate their attempt to bring at the most famous stage of the Italian Musice a story tied to tradition, love, territory, but especially to a village.

What to see in Vieste

The Church of Santa Maria Assunta
Castle of Vieste
Merinum Necropolis
More...
are you an Italian villages lover?
Join our Community
and share you experiences!