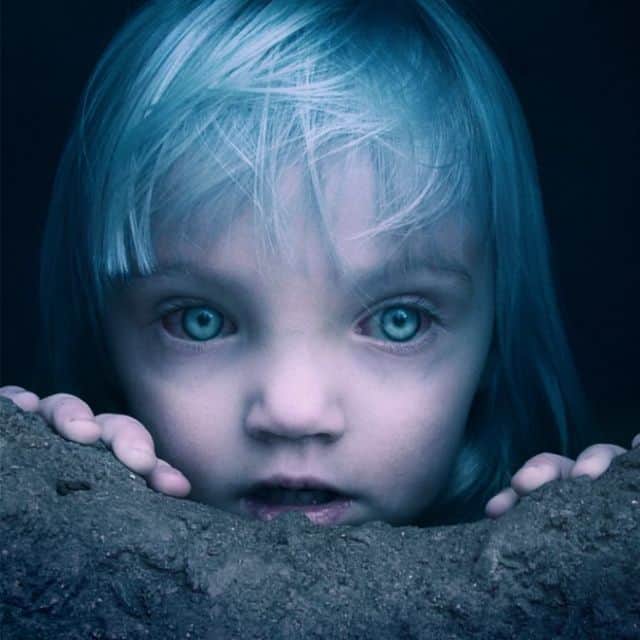 We are in the castle of Borgo Montebello, a hamlet of the municipality of Poggio Torriana, Rimini, where strange things seem to happen every five years. Since the opening of the castle museum in 1990, some visitors and researchers claim to have heard noises that would remind them of a child's crying or laughing. A "different" girl who disappeared in that castle without a trace.

The story of the disappearance of Azzurrina has been handed down for about three centuries, when, around 1600, a parish priest of the area put it in writing with other popular legends, but there is no trace of this writing. The story, entitled by the parish priest "Mons belli ed Deline" (Montebello and Adelina), would suggest that the real name of Azzurrina was Adelina (Deline) but according to other sources, the name of the small disappeared was Guendalina.

The version of the legend that arrives to the present day, mainly handed down by the owners of the castle and people in the area, tells us the short and sad story of Azzurrina, actually Guendalina Malatesta, born around 1370, daughter of Ugolinonuccio, or Uguccione, feudal lord of Montebello. Azzurrina was a child with sky-blue eyes and blue-tinted hair. The child had the misfortune of being born albino, which at the time was a symbol of great misfortunes because of the popular superstition that linked the albinism to events of a diabolical nature. To avert the risk of being accused as a witch or that people could dismiss her as "different", the mother of Azzurrina continually dyed her hair black but the color did not take her albino hair leaving a color that tended to light blue. Hence the "colorful" name. The mother's expedient was not enough to reassure the family, so the father assigned two guards to the child who almost never left her alone. Moreover Azzurrina could never leave the castle to minimize the risks of contact with the locals.

It was June 21, 1375, the day of the summer solstice, when, during the thundering of a storm, Azzurrina was playing ball under the watchful eyes of Domenico and Ruggero, her bodyguards, but a moment of distraction was enough and nothing was heard of Azzurrina ever after. Legend has it that the little girl, in playing, chased the ball that had escaped her, along the stairs to the castle icehouse. Heard a scream coming from the stairs, Domenico and Ruggero ran after her but arrived, they found no trace of both the child and the ball. But of Azzurrina, in the castle of Montebello, something has definitely remained.

Handed down from mouth to mouth, embellished, enriched, distorted, magnified, as happens with every legend that is respected, the story of Azzurrina presents some mysteries. One of the many is the fact of the color of the hair, which, according to some, could not have that shade since the pigments present in that area could at most reach shades of brown or greenish. There are also those who say that it was Ugolinonuccio himself, her father, who ordered the murder of his daughter because it represented an obstacle to his career. But surely, the biggest mystery is that of the presumed presence of the child in the castle.

Whether they are just rumors or colored evocations to attract tourists, the fact is that every five years, during the night of the summer solstice, visiting the castle, some say they have heard strange noises. From the opening year of the castle museum, on June 21, 1990, some researchers of the paranormal, with sophisticated equipment, recorded, what on the website of the castle of Montebello, is defined as "a sound". The same sound was recorded by other researchers on June 21, 1995, 2000, 2005, adding to the recordings some mysterious images.

Those who have listened to the recordings have conflicting opinions. There are those who claim to recognize the cry of a child, who recognizes a laugh, who claims to hear a voice, who does not feel anything human, who hears nothing but wind, rain or ambient noise.

On June 21st 2010, some CICAP researchers made other detailed records but the result does not present any noise attributable to intelligent entities. According to Piero Angela, this would be one of those cases in which "when the level of control is very high, the phenomenon disappears".

On the legend of Azzurrina was also shot a horror movie, directed by Giacomo Franciosa, and of course strange events happened on the set during the shooting in the castle. The local newspapers have reported news as an inexplicable illness suffered by the director at the beginning of filming and a mysterious accident reported by the actor Gianfranco Terrin.

So there are many mysteries added to the one that not only surrounds the mysterious disappearance of a girl feared as "different", but also of her ethereal presence, still today, within the walls of the castle of Montebello. Presence that every five years returns to talk about if not only in a mysterious way but also in the form of an appeal by the great-grandson, the prince Luciano Silighini Gragnani Lambertini, who in 2015 declared "leave alone Guendalina", now become for many object of even monetary speculation, so that she could, finally, rest in peace.