For all the witches of the village of Triora 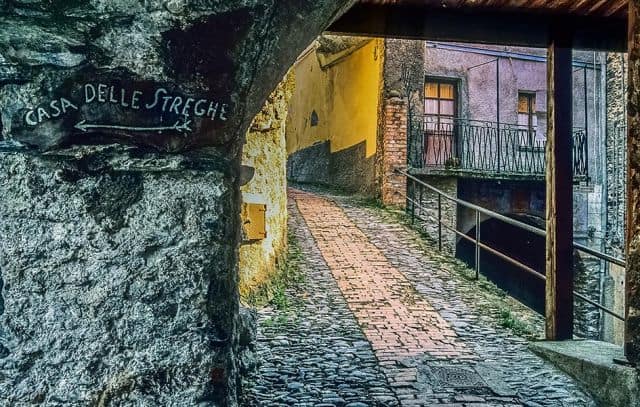 Walking through the alleys of the village in the province of Imperia, it is clear that the place has something mysterious. In the maze of narrow streets, passing under a bow and another among the slate houses, a magical, macabre, charm amidst the atmosphere of the Witchland, Salem Italiana, Triora.

Famous for its bread and for the terrible court case of witches in the second half of the 1500s, Triora almost seems to boast that charm. Many details in the village, between the sacred and the profane, tell ancient stories of faith and paganism. Decorations of oxen, stone heads, characters wrapped in mystery, announcements, sacred motives, but also black cats and broom on doorways. ... and places to avoid after sunset. It almost seems that in Triora the witches have always been and maybe are still there.

Yes, in Triora the witches have always been. Only the name (from the Latin "Tria Ora" - "three mouths") makes us think of the Cerberus in its coat of arms. The Cerberus, what a case is the guadian of greek hell, should symbolize the confluence of the three rivers near which the village rises. A place that since its origins was a center in close contact with the world of the afterlife. Since the prehistoric times, the area is dotted with menhir and stone circles.

The town dates back to Roman times, the times of the Iron Age, of the matriarchal tradition that takes its origins from the mysterious celtic-ligurian rite of the goddess Mother "Baubo" depicted on ancient statues of bone, stone or Ivory like a procace woman with four breasts and theeth of wolf in the most intimate part. Statuettes carried by the priestesses as a sign of defense against the violence of a male guerrilla society in those times. This was how the goddess Baubo was vulgarized with the passage of centuries in a kind of old woman who warned the girls about the deception of male sexual malevolence.

In the time of Christianization, this matriarchal society could only be horrible and scary by creating myths and legends and increasing fear. The fear of witches in the west Liguria, women with magical powers that created powerful potions, which made strange rituals, that they passed their knowledge to their young females who could be recognized by a hairy fan in the back of their back. It is said that the little witches, during lactation, bite their mothers' nipples so much that they bleed.

Many, too many "proof" of the Triora area speak of witches even before the 1587 trial. 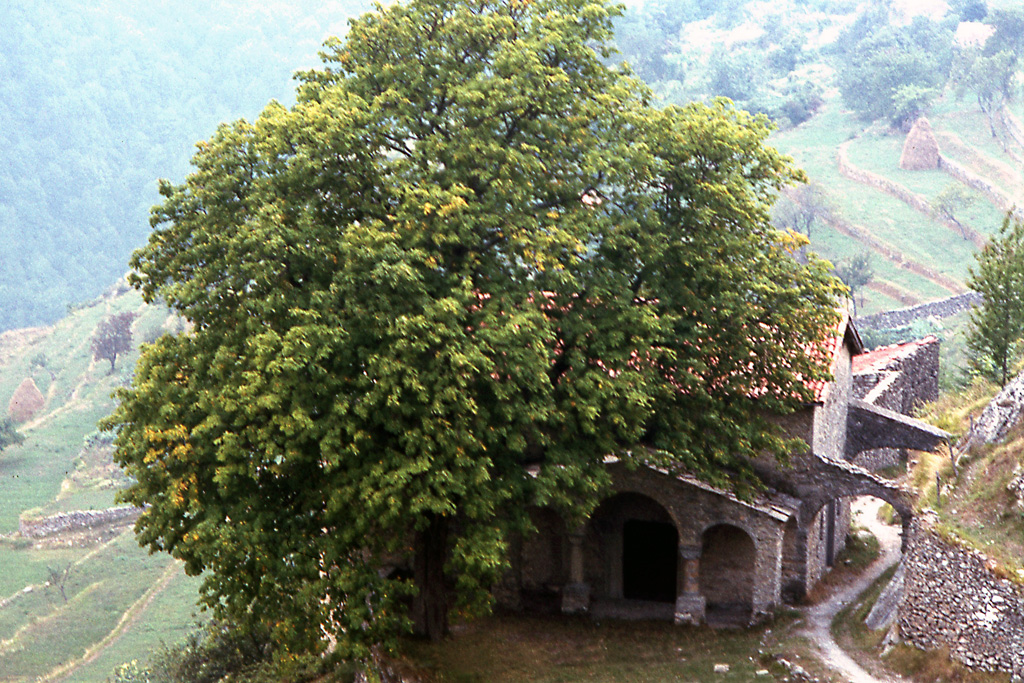 In 1400 a church was built dedicated to San Gerolamo and then to San Bernardino that its interior narrates the dark soul of the place and the climate of fear. The terrible frescoes inside show a scary Universal Judgment with special creeps of suffering, damned, demons, blood, anguished children, capital flaws, all to foster the growing psychological terrorism at the expense of a population already working in pain under the rule of powerful greedy and arrogant in conditions of degradation and difficulties that are now inconceivable. Whatever was considered adverse, ill, strange or mysterious was the result of evil, sorcery, of witch.

Some people say that the Baggiure (witches in dialect) were preparing a bread using the infected wheat from the Claviceps Purpurea mushroom (containing lysergic acid, a powerful hallucinogen) that made crazy. The infamous Witch Bread.

There are those who warn not to go to the place called Cabotina where witches play banging children and make strange satanic rituals. 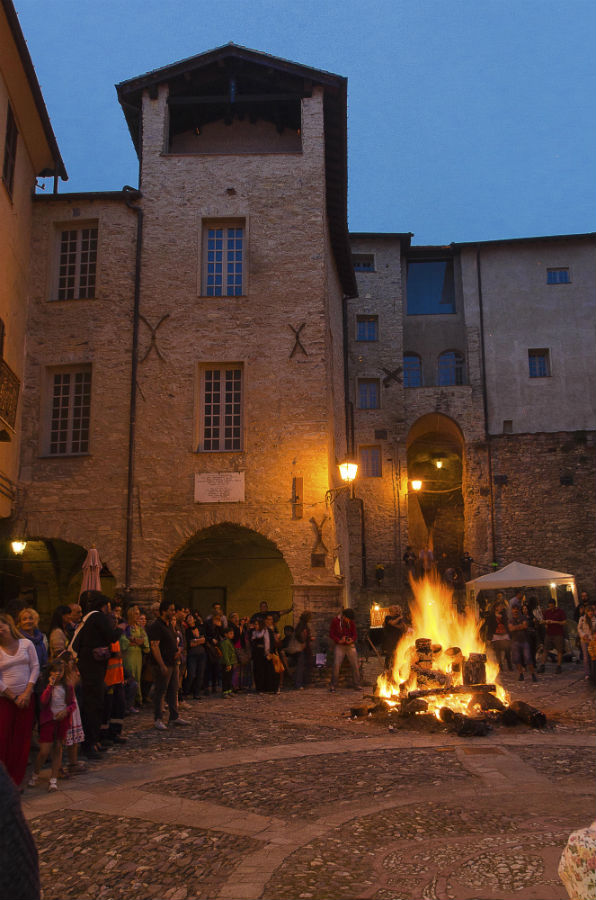 There are, however, those who consider the deceitful women as simply innocent of the extraordinary talents that can create soothing potions and make benevolent spells using rites handed down from afar, but this was not enough to save the reputation, and the life of the witches of Triora.

The atmosphere at Triora was far from rosy. So the "nature" wanted to give a further shake to the already fragile stability of the Triora community bringing a period of famine.

It took little time for the poor and ignorant people to pass that what was actually the result of speculations between the landowners and the rulers of the village, that famine was due to the wicked baggiure, the sorcerers, the witches.

It was just a simple local parliament in October of 1587 to start the Triora Witch trial.
The religious authorities were called upon to intervene, and this made the inquisition more greedy.

During a sermon written to "prepare" the community before the trial began, Gerolamo del Pozzo, an inquisitor of Albenga, accused the witches of:

"All of you who are watching me have to report the people who caused the death of the crops. These women, or men, represent the devil, eat the children "

Able to administer fear and to foment the minds of the simple, the inquisitors obtained the imprisonment of twenty women but because of extortionary denunciations with terrible torture the prisoners soon became thirty. Thirteen girls and one child declared themselves guilty. Some private houses became real prisons, among which the most famous is the house of the Meggio, now named Ca 'de baggiure (House of witches). Among the extravagant testimonies were also names of important characters in the village. The control was lost and the first dead were not delayed. Isotta Stella, from a noble family, died for the tortures suffered, but another woman throw herself out of a window (death given to the want of evil).

Given the climate of terror, the local authorities invited the inquisitors to act with greater caution given some important people among the inquisited but did not succeed much. In June 1588, Genoa sent Commissioner Giulio Scribani (or De Scribani) who made the situation even tighter by transferring the thirteen inquisited to Genoa and looking for witches everywhere in the area. The accusations were: offense against God, business with the devil, murder of women and children. Investigations, incarcerations and innocent murders extended to Castel Vittorio and Sanremo as well, beginning a real hunt for witches. De Scribani killed on the stake four people including Peirina di Badalucco and Gentile of Castel Vittorio.

The tragic trail of witches ended in April 1589 under pressure from the Doge of Genoa, Davide Vacca, on the Holy Office. It is not clear about the fate of the women that were imprisoned, but, according to some historians, they were left free.

This could be right in the fact that there are still witches at Triora.

A testimony of the beginning of the twentieth century tells of a shoemaker with two humps. It is said that at the time, while playing the Ave Mara, the gates of the city should remain closed to prevent children from becoming prey to witches. One day a child with a hump stayed out of the wall and the witches took him, cut his hump and played with it all night. The next morning the baby was released and glad to have no further malformation. A mother of another child, also with a hump, left her son outside the walls waiting for the same treatment but the witches, after "playing" them all night, applied a second hump.

Another testimony of the postwar period tells of a beautiful woman, of a macabre, irresistible charm, of which every man remained slaved or would be able to sell the soul for her. The woman had long, corny hair, deep black eyes, an inexpressive face but sunlight was drawing, everything became dark, the walls cracked, the roses lost their petals, and the pregnant women aborted after seeing her.

So are the witches of Triora still there?
To answer this question we quote 2 responses by Sandro Oddo, secretary of the Tourist Association of Triora and author, issued during an exclusive interview with Thexplanet.net, saying:

"Anomalous happenings often happen, in my opinion, I was born here, baby, they said to me, 'You do not have to go over there because that's a witch.' And I did not go there because I was scared But I'm convinced that the witches I'm still there, but it's not the witches who say they do 'pans' No, they are people who do not know, but we know who they are They are people who have something bad, bad. but those who say they are witches are not witches, but they are 'good witches', let's say, so luckily there are fewer. We recognize why, aside from the fact that people it speaks and comes to know, and then it is in a sense like a feeling, because there are some sensitive people, I have known them, when they are facing the witches, they immediately feel a negative energy. with one of these people I suspected was a witch they do evil without appearing, but they do it voluntarily.
There were also people who were 'bothered'. When a person was "overwhelmed", that is, wretched, it was carried by the scaccia-bagiure. "
"There are good witches, but I think witches exist. I'm convinced they exist, but true witches are bad, but they are not the ones that are recognized but the ones that are hiding and are able to enter the the spirit of the person, and to hurt. I am convinced of this. "

What to see in Triora

Triora Witchcraft Museum
More...
are you an Italian villages lover?
Join our Community
and share you experiences!