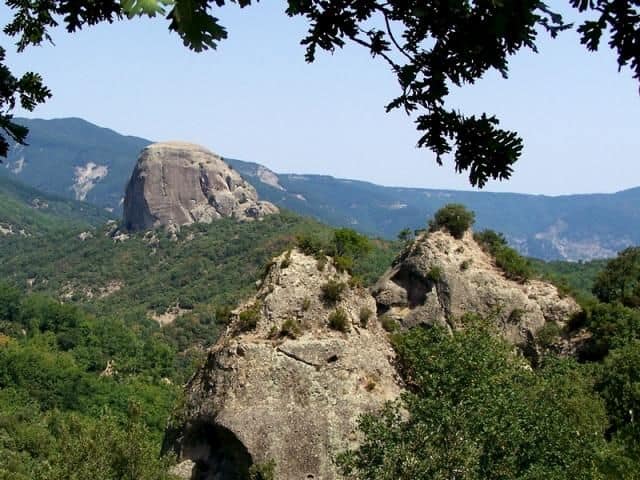 We are in Calabria, in the territory around the village of Badolato. In this land kissed by the sun, the hills, the countryside, even at sea, there are several large granite boulders scattered around everywhere. They are the "rolling stones" (or "stones of love"), signs of a time between legend and mythology.

A legend says that in a remote time the area was inhabited by giant populations divided into families or tribes. These giants dedicated themselves to agriculture, sheep farming and other forestry activities. They were peaceful giants, laid on the ionic side of what are today called Calabria and Sicily, for the Sun was their god, and this land is literally "kissed" by the light of the star.

Like in other civilizations, giants in the area used to organize a competition to reward female beauty and male strength. At the end of this trial, was estabilished the most beautiful girl to marry only to that giant winner of the ritual competition, the competition of "rolling stones".

This particular competition, which took place at each equinox (especially that of spring), consisted in throwing, from the top of the highest hills, the largest and most resistant boulders as far as possible, toward the sea. Young giants who were looking forward to the most beautyful girls of their own community were challenged in that competition and sometimes they were helped by relatives and friends to choose the most suitable boulder for, typically granite.

So, twice a year, the stones rolled from the tops.
Those fledged with less force stopped on the hills, others reached the coasts, others went further to form the reef still present today at the bottom of the waters.

But this competition was not the first to show the strength of the most valued.
Previously the value of the giants was established through body-to-body fights that sometimes made the participants, the pretenders of the beautiful "giants", somewhat malconied and naturally to the greatest disadvantage of the weaker ones. For this reason a tribal leader among the giants of the Badolatese area devised the competition of rolling stones, also because the territory had in abundance. Other giant tribes liked this ritual competition this favored its spread. That is why today we can admire the great "stones of love" scattered in the countryside, in the hills, emerging from the sea or forming underwater barriers. In fact, we can define these as "the stones of love" as they was used in the "conquest of the most beautiful".

Just a legend?
Near the Megaliths of Nardodipace (Vibo Valentia) there have been found bones dating to several thousand years and measuring more than 2.30 meters for males and 1.90 meters for women. Real giants?
This is perhaps a trace that could explain the creation of megalithic formations in other parts of the world such as Stonehenge or the Easter Island... Works of giants?

Speaking of another "gigantic" myth of the area, we can mention the famous launch of the Polifemo boulder against Ulysses, a boulder identified by some in the Rock of Pietragrande (Catanzaro).

Throwing big boulders, for giants, was really a vice but this vice has perhaps given us legendary landscapes that leave us breathless whenever we visit these mythical lands.

Legend freely taken from the story by Domenico Lanciano (2012)

What to see in Badolato

The Church of San Domenico
The Shrine of Blessed Mary of Health
The Franciscan Convent of Santa Maria degli Angeli
More...
are you an Italian villages lover?
Join our Community
and share you experiences!