The ghost of the beautiful and terrible Matelda at Poppi Castle

The most beautiful woman in the Casentino who has caused dozens of victims in the whole Arezzo area with its charm. 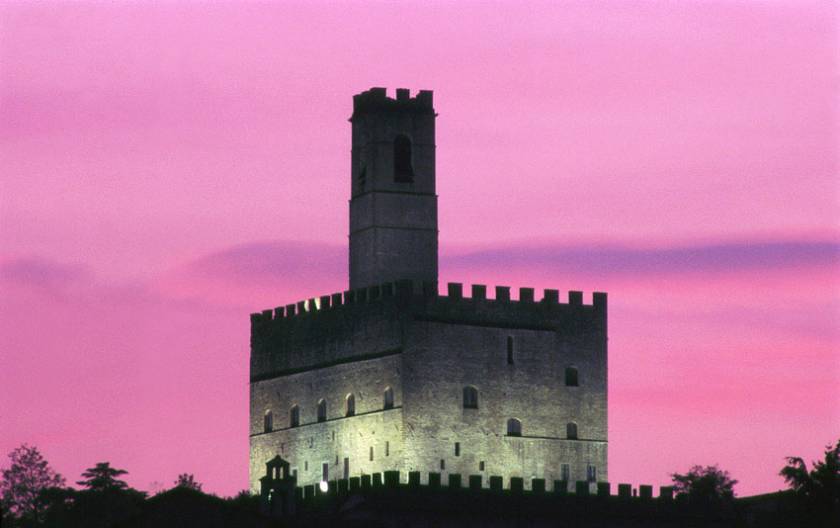 The Castle of Conti Guidi in Poppi, in the province of Arezzo, is located on a very ancient rock, that appears on maps already in 1191. Today the ground floor of the castle hosts an historical museum in memorial of the battle of Campaldino of 1289 between the Guelphs Florentines and Ghibellines of Arezzo and boasts guests of the likes of Dante Alighieri and Taddeo Gaddi, a pupil of Giotto. But the most interesting parts of the building are the subterraneans, a place of bloody vicissitudes where thousands of innocents died, and in which is enclosed the legend of beautiful and ruthless Matelda.

It is not the first time that the protagonist of the legend about infested castles is a bad, unfaithful or rebellious lady. Probably because many of these stories date back to an era, in which life was influence by the Church, so women were often seen as an allied of evil and, therefore, the ones to blame for any problem afflicting men.

But let's go back to us to discover the legend of this beautiful, but lethal and evil woman, whose ghost still lurks in her abode after having brought pain and death to nothing to end.
His name was Matelda, Countess Guidi and wife of Poppi's most powerful man. It is said that she was so beautiful, that many, in order to approach her, challenged the wrath of the Guidi family, who at that time controlled the whole territory.

In the Casentino area, all the men and the boys talked about her, even when she was not direclty involved in the topic: everyone dreamed about having her, but the castle gentleman was a rigid and ruthless man, famous all over Tuscany to make cruel punishments to those who dared to look up to staring at her bride.
The unseen beauty of the woman spurred many to spy on the castle activities, in fact some hostages were hired to spy the activities of signorships and communicate them to the spasimants of the beautiful Matelda. It has to be known many political and military commitments forced the man to leave, and stay away from the castle for weeks. That was the right time to approach the castle and try to enter the graces of the beautiful castellana.

On the other hand, the beautiful Matelda, after the first days of loneliness, started to feel like a bird in the cage. Her marriage was organised by her father, who obliged her to marry a man far older than her, and according to many, even rather ugly. She did not love him, but those long times of solitude at the castle were for her even a worse punishment than his company.
With the passing of days, she began to get some male company with a very ingenious method: he demanded the minstrels to cheer his evenings, knights who informed her of the situation at the boundaries of possessions, messengers who would bring letters to her husband, tailors sewing the best clothes, craftsmen and merchants who provided her the best of everything she wanted; starting thousands of unfaithful relationships.
With this method, Matelda found a way of comforting herself to the lack of a lord of the castle several times, but there stil was a problem: even though she liked those hot nights of love, she could not let rumors about Mr Poppi's lady's spread across the village, because any gossip would have put an end, not only to a  very rich marriage, but also to her own life.

It was quite easy for her to find a way to get rid of the men who remained enamored after the night of lust that she offered them. The method was always the same: at dawn she invited the lover to get out of the castle through a passage in the basement, telling him it was a secret exit. Actually, the passage led to a dark tunnel, filled with pitfalls with spikes and sharp blades. The stickers were very high and no one could escape that terrible trap, not even the most agile lover: every man rewarded with the body of the beautiful Matelda lost its own precipitating in a deep hole and remained impaled at the bottom.

The number of "disappearances" in that area increased to such an extent, that it was impossible not to link those tragic events to the castellana. When the last young man never returned home, Poppi's inhabitants decided to assault the castle. As Mr Poppi was away with his army, they dropped the door and caught Matelda. The few guards left could do little and the angry crowd managed to drag the castellana to the top of the tower and there to wall it alive. And so ended the days of beautiful Matelda ...

Even today it is believed that his soul has not yet found peace and it is still wandering in the corridors and the rooms of the castle of Poppi. Many locals claim to have seen the most beautiful woman in the Casentino look out of the window of the Poppi castle, dressed in white and with a still beautiful face. There are even those who even claim that visiting the museum, you can hear a faint and provocative voice and feel buzzing on the neck that causes shivering of cold and pleasure. Is the beautiful Matelda still looking for a fleeting night of love with a beautiful young man?

Via Magrete, 13, Poppi
Borgo I Tre Baroni
Within the green heart of Tuscany, in the Casentino valley, I Tre Baroni is located in a great po...

P.zza Iacopo Bordoni, 2 - 52014, Poppi
Parc Hotel
The best starting point to discover the wonders of the Casentino valley and breathe the air of th...

Via Roma, 214, Poppi
Albergo Casentino
Casentino is a heap of suggestions and values in which humans and environment are still able to h...

What to see in Poppi

Hermitage of Camaldoli
Monastery of Camaldoli
Counts Guidi Castle
More...
are you an Italian villages lover?
Join our Community
and share you experiences!