Castrocaro Terme, dominated by a fortress, contains all the ingredients of the typical Romagna bien vivre. 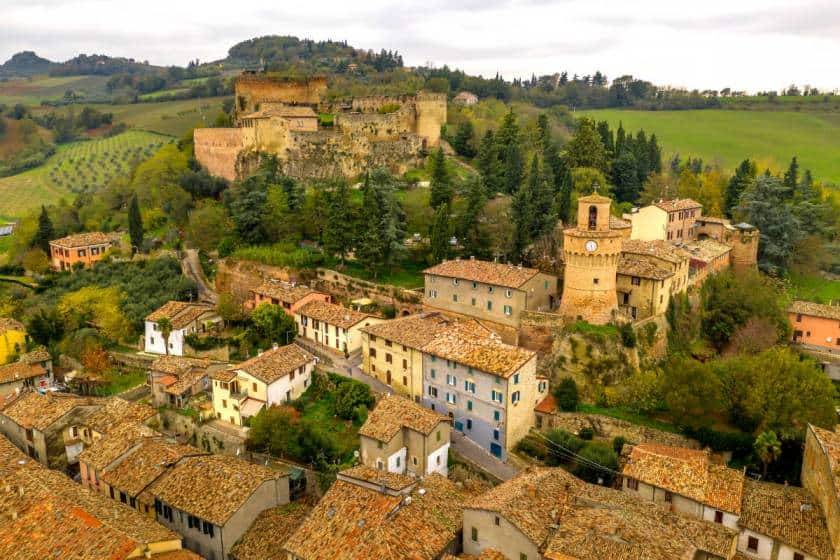 In the hinterland of Forlì Castrocaro Terme keeps all the features of the well-being of Emilia-Romagna come together in its tiny village overlooked by a medieval castle: characteristic views, a wide range of food and wine products, thermal water for your relaxing moments and a handful of legends to be discovered along its narrow streets. If you leave Forli and drive along the state road that crosses the green hills, the vineyards and the last edges of the Apennines the castle will welcome you in Castrocaro Terme. Perched on a cliff of sea origin, many fossils were found in that area, the castle and its towers have an age-old story to be told: it was already a part of the feud belonging to the Earls of Castrocaro in 1118 and many famous people have been living there afterwards. One of the most famous was certainly Freferick Barbarossa and a number of battles, excommunications and changes of ownership happened there. The role of Castrocaro as the main town under the Republic of Florence since the XVth century is interesting. 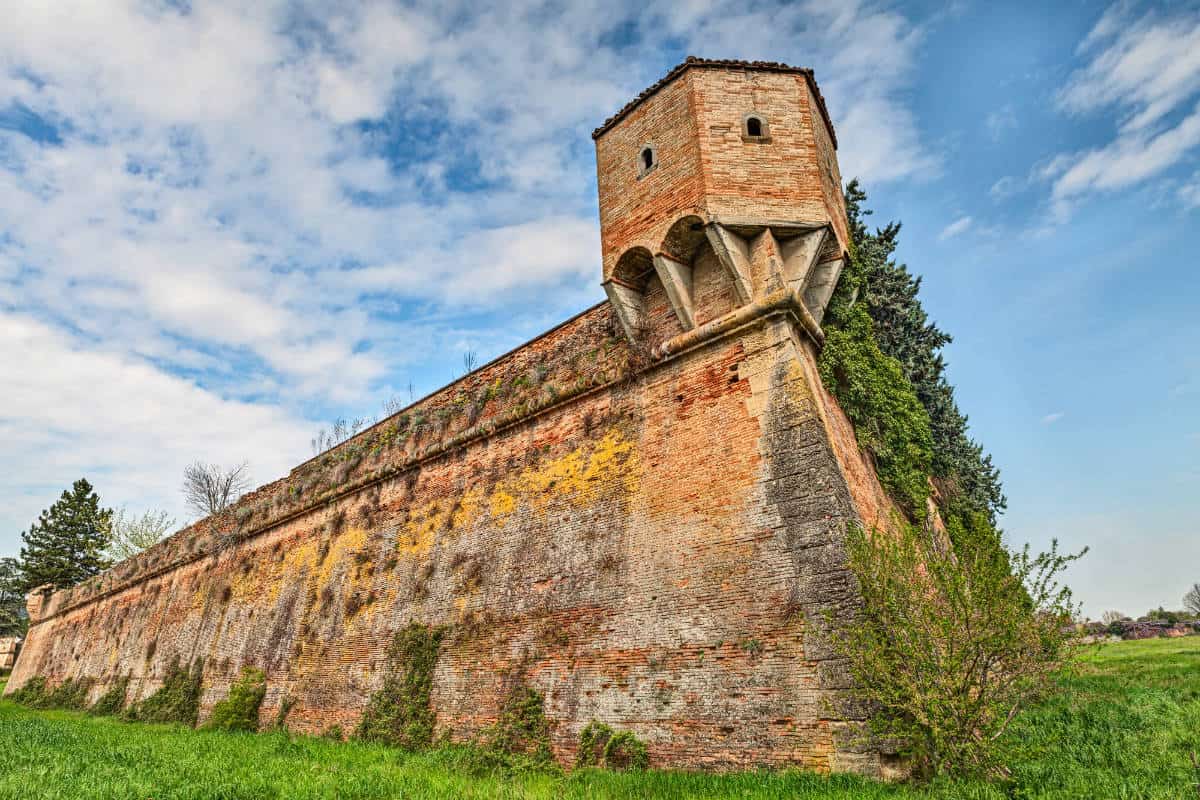 Between history, wine and legends
The castle deserves to be visited since it’s an interesting historical-archaeological museum nowadays and it also hosts the wine from the wine-road of Forlì-Cesena where you can taste some of Bacchus’ favourite wines like the Sangiovese, the Albano, the Trebbiano, the Pagadebit and the Cagnina. While you are sipping a good glass of wine in the medieval rooms you might even have the chance to hear e weak wail on a moonless night: it’s the love cry of Margherita, the young daughter of the earl of Castrocaro who jumped out of the tower in 1253 and killed herself to avoid the marriage with her cousin Guidone because she didn’t love him. From a young woman who killed herself to a bloody ruthless one: the legend goes that Caterina Sforza, the illegitimate daughter of Gian Galeazzo and the Countess of Forlì used to murder her lovers by throwing them into a very deep pit, still visible at the top of the castle. 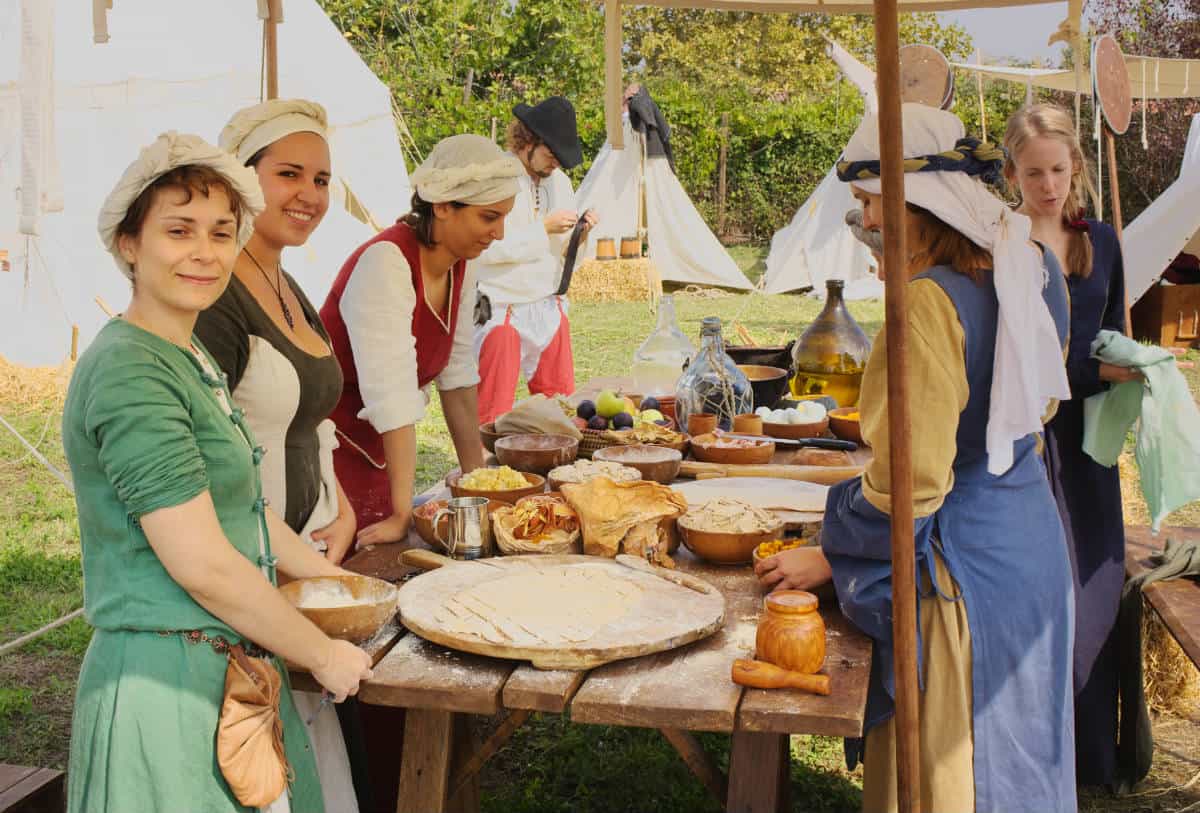 The village: a chest of treasures
After leaving the castle you can go for a quiet walk along the narrow streets surrounded by the walls to discover a number of treasures: there are huge medieval constructions, towers, noble palaces, Palazzo Corbizzi is remarkable featuring its renaissance decorations and Palazzo Grazioli too featuring a front door made of stones in the Tuscan style and a number of public buildings that remind a glorious past like the Palazzo Pretorio or the Captains of Justice Palace, the former Court on which the ancient coat of arms of the Medici family still stands out. The church of San Nicolò, enriched with a precious number of frescoes from the school of Marche that might be related to the workshop of Gentile da Fabriano deserves to be visited and the group of Bargello as well whose cellars were used as “public jails” during the dark centuries. Besides the historical treasures there are also a number of really nice tiny restaurants where you can taste the wide range of products of the region from “cappelletti”( a type of filled pasta) to piadina, from handmade tagliatelle to the best meat and the king of the region, the white local truffle that can turn each dish into a unique experience. 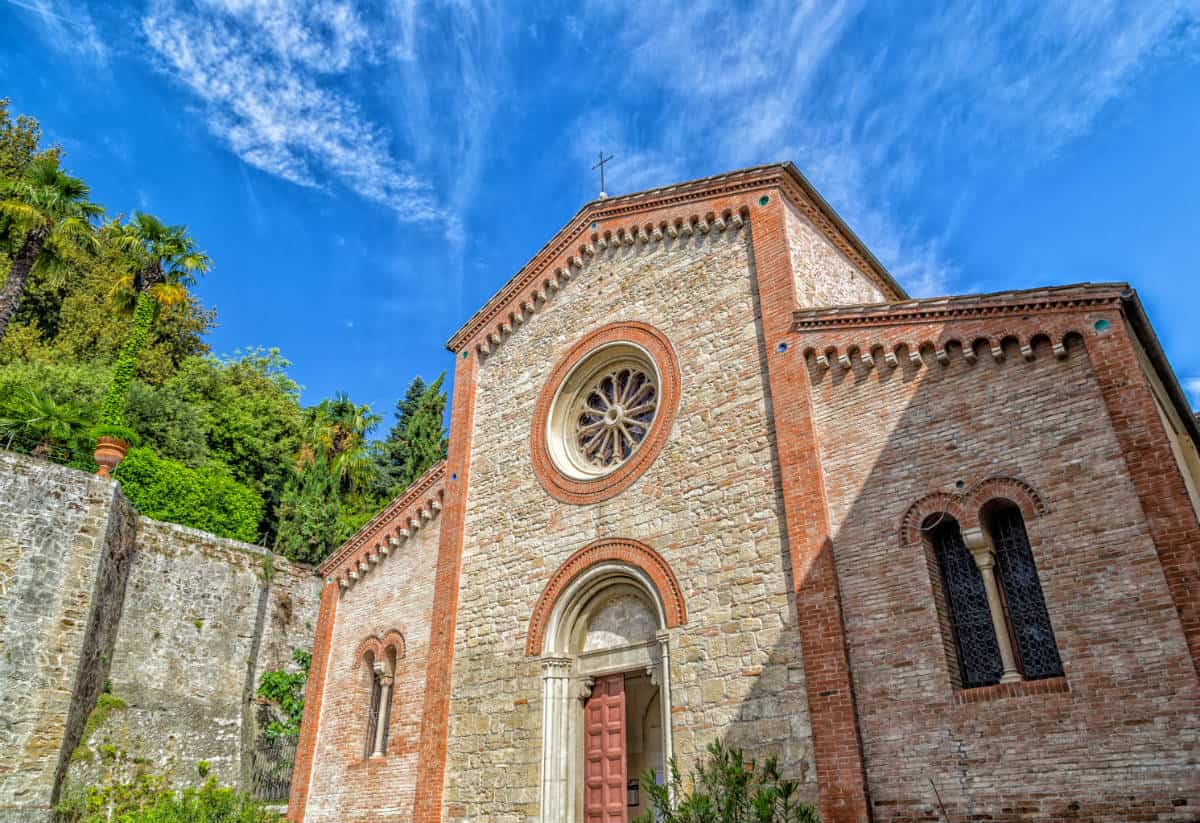 The Baths: the praise of Art Decò
Together with Bacchus and Ceres the wellness can’t be missed. The sulphurous thermal water is used for the baths, the mud, the massages and plenty of beauty and medical treatments for a perfect rehabilitation. The Thermal Baths is the temple of well-being, they were built between the 1930s and the 1940s in the Art Decò style together with the elegant Grand Hotel with its wonderful Party Pavillon: its semi-circular front side is made of multicoloured marble, travertine, iridescent bricks, it is sided by two huge staircases rich of mosaics, marble and fine pottery, the Party Pavillon is enriched with two fountains that contain pieces of gold and green marble and an amazing floor of majolica tiles that reproduce the sea bottom full of real and imaginary fish. Some dolphins, some cornucopias, some star signs, some metaphysical symbols, vases of flowers, waterfalls, amphorae are located inside the hotel to offer an amazing unique complete artistic view. 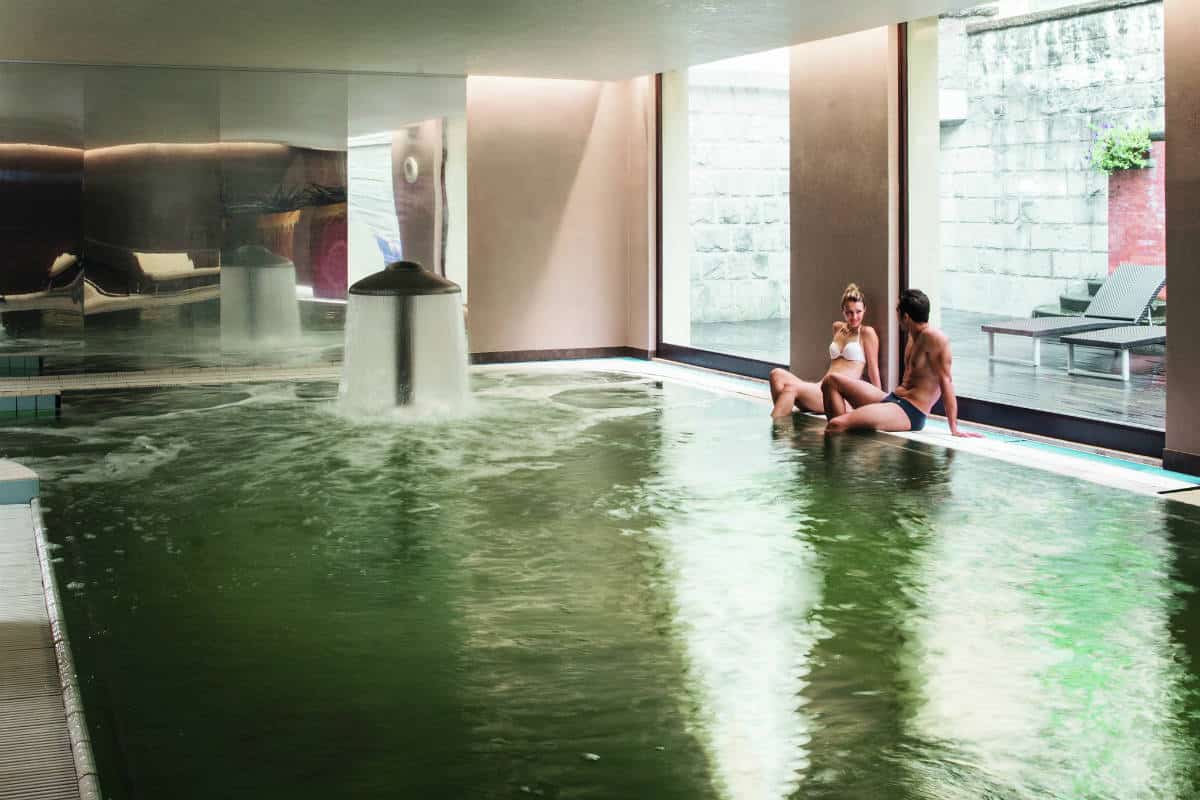 The land of the sun: the Renaissance charm
The village of Terra del Sole (the land of the un) is near Castrocaro, its name reminds the warm light that heats the surrounding hills for the most of the year whose origins date back to the Renaissance when the “symbolic space” was designed to represent the power of the noble families. Surrounded by tall walls up to 12 metres and protected on the four corners by big towers, Eliopoli (it’s the second name of this village) is an “ideal town”, it’s fortified and its foundations date back to the 8th December 1564 when the construction started according to the urban laws of that time that had been inherited from the military engineers. It was wanted by Cosimo I De’ Medici to protect the border with the Papal State, The Land of the Sun developed around the huge parade ground on which the church of Santa Reparata faces the Court in order to symbolize the two main powers together with the castle of the Captain of Artillery and the Castle of the Governor. All around the sight gets lost in the lands and the vineyards of Sangiovese. 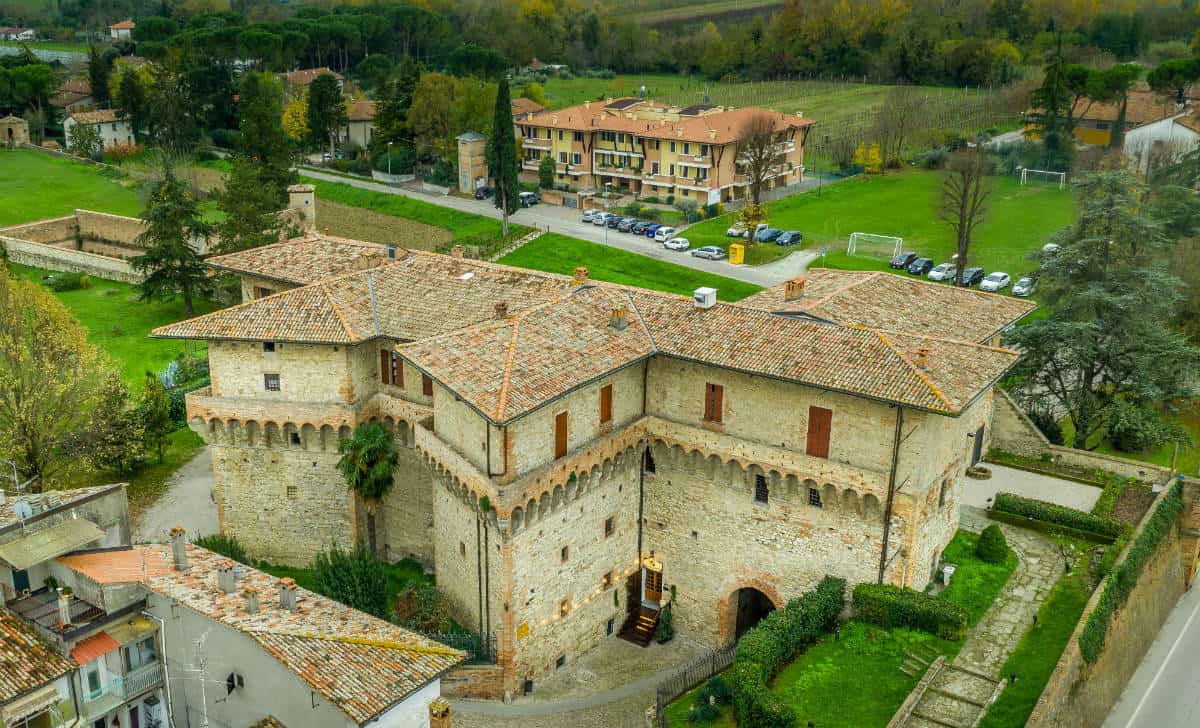 What to see in Castrocaro Terme

Church of Saints Nicolò and Francesco
Castle of the Captain of the Artillery
Bell tower
More...
are you an Italian villages lover?
Join our Community
and share you experiences!