Acquaviva Picena, not far from Ascoli Piceno, gathers all its beauty in a tiny village laid on the hills of Marche.It’s a place full of history and culture that is well-known for its handcrafted products 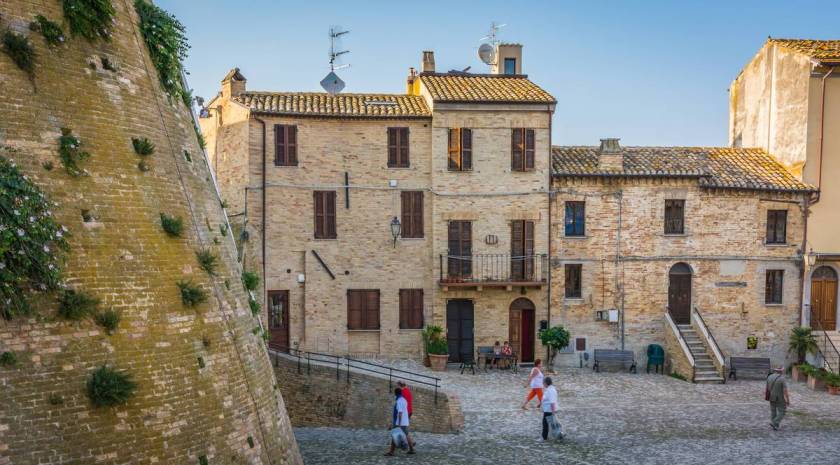 Walls and ramparts, a massive stronghold, narrow streets and churches. Acquaviva Picena, not far from Ascoli Piceno, gathers all its beauty in a tiny village laid on the hills of Marche. It’s a place full of history and culture that is well-known for its handcrafted products like the typical pajarole, baskets made of straw and willow that tell a lot about its inhabitants’ traditions. Acquaviva Picena is also an interesting archaeological site since it keeps a heritage that goes back to prehistory and witnesses a manufacturing tradition that goes back to the Paleolithic Age. Some domestic tools were found as well as some tiles and even some crafted flint objects although at a very elementary level. And the pottery from later Ages was also found together with some objects that enable to date the first important settlements in this area back to the sixth century B.C. You can see this heritage at the Archaeological Museum that is based inside the stronghold, it’s the main landmark of Acquaviva, it’s the best starting point to start your journey through the village and go deep into its artistic and historical richness. 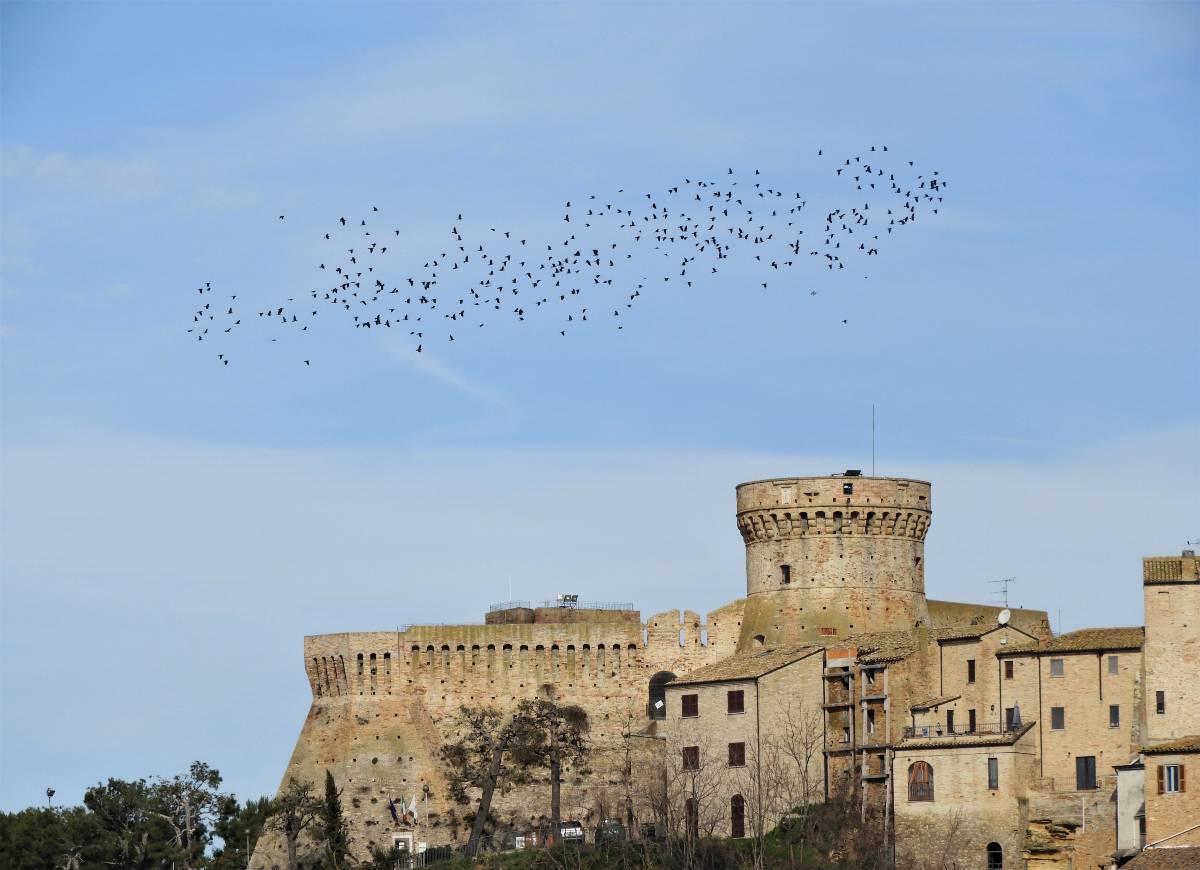 A stronghold and its village

Maybe you don’t know that Acquaviva was the name of the family related to the most important landmark of this place, the stronghold that was built to show their power the 14th century. It was born to protect the village from the external attacks, nowadays you can admire its huge  architecture that has been perfectly kept up to now thanks to the restoration works that took place at the end of the 19th century under the supervision of the architect Giuseppe Sacconi from Marche, well-known mainly for his contribution to the Vittoriale in Rome. The stronghold is the vibrant heart of the village where many events are held throughout the year. From the main tower you can enjoy an amazing view of the surrounding hills, the Gran Sasso and the Maiella’s peaks down to the sea. The stronghold is perched on the top of one of the two facing hills that are connected by the central square which is the gravity centre between the stronghold and the wide Renaissance square, Terra Nova. 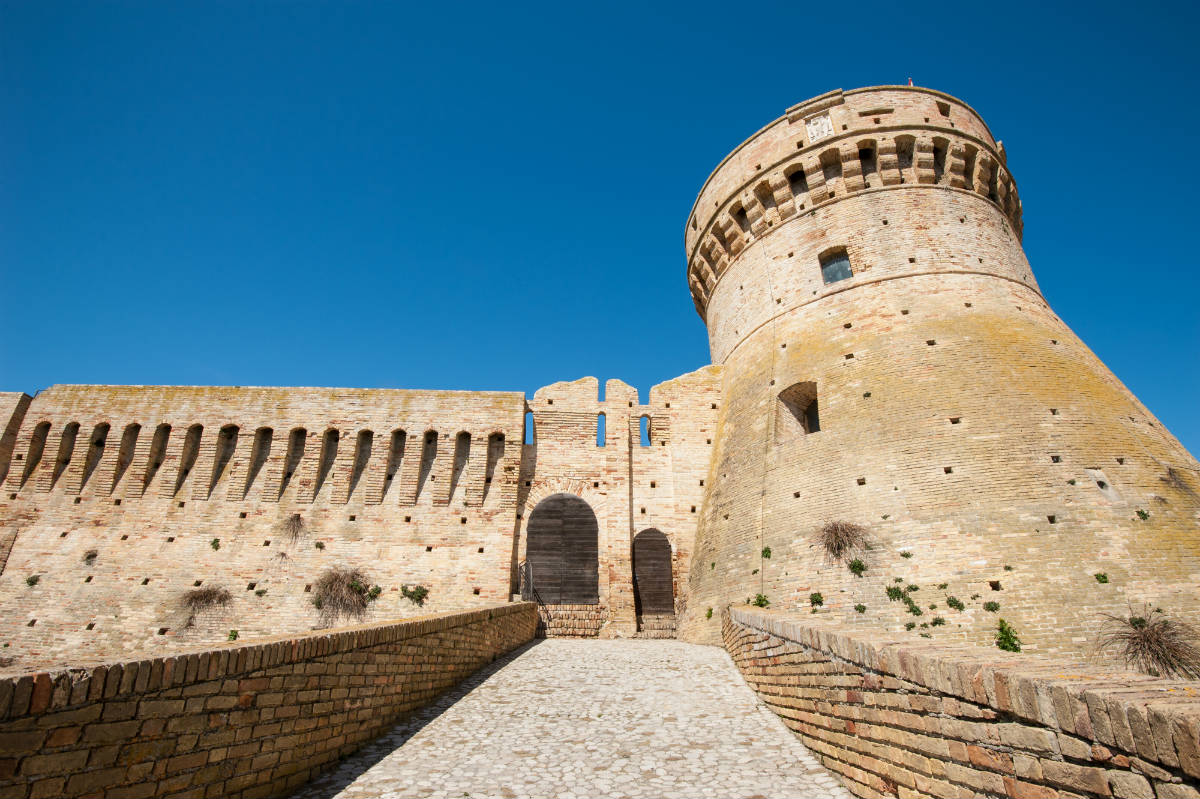 Acquaviva Picena can be told by the movements of the female skilled hands that continue a handcraft tradition that is called “pajarole”. The straw and willow baskets have been made since the Middle Ages, they were once used to carry heavy loads of grain and legumes standing on the head that were used in many different ways. All the women from this village used to do this activity and the oldest ones used to wear a lacy shirt, a skirt with flowers and a black apron. They still gather outside their houses in the Summer evenings to patiently work the straw and they take you back in time. The tradition of pajarole teaches how to be patient: you must wait before using the wicker stems (the willow’s branches sprout in the water) and the straw to make these baskets that are shaped as an upside-down cone. 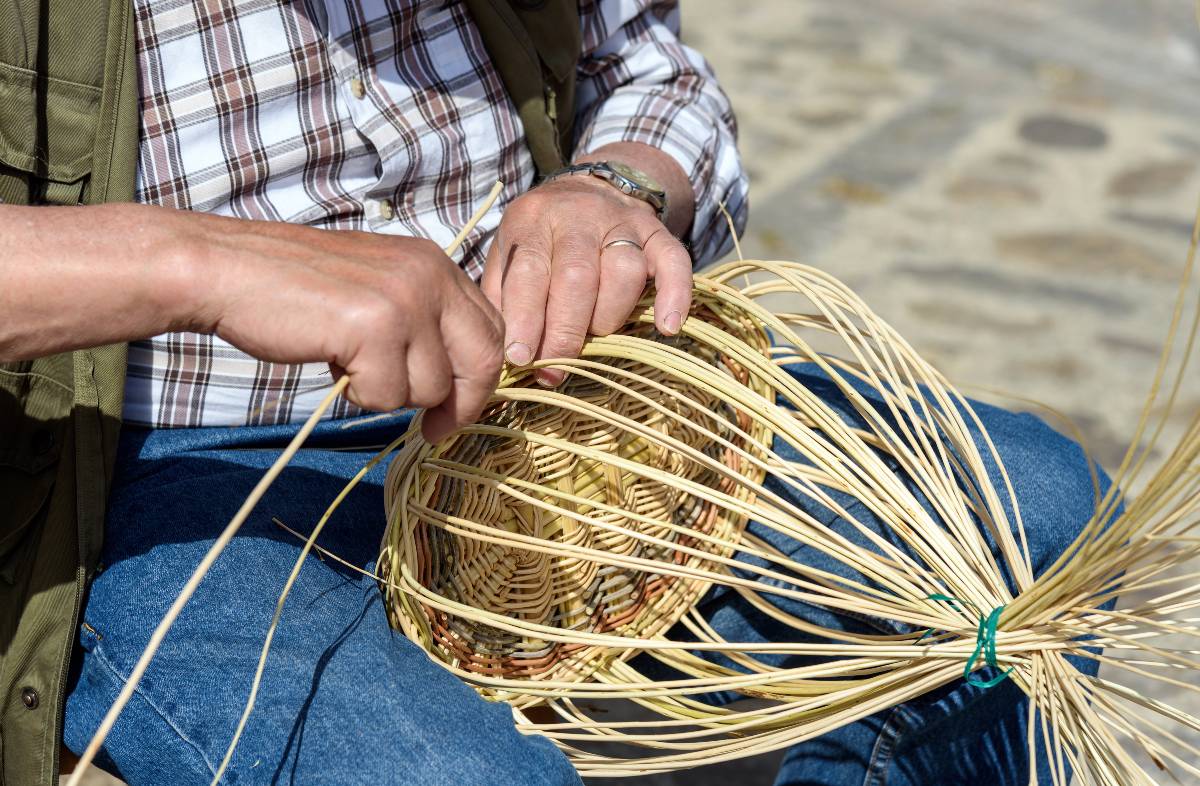 Red as a peach, a rainbow on your dish

If you ask for a peach in Acquaviva you won’t get a fruit but a delicious sweet that reminds of it. It’s made of two parts that are linked by some delicious chocolate and they are soaked in the Alchermes liquor. You can’t miss this delicacy, it’s another typical product that you will find on your table together with other delicacies like the spumini that are almonds croutons. If you search for traditions while you are sitting around a table you’ll be brought back in time by tasting the “frecandò”, a pan of coloured vegetables from the garden to be tasted with the poor tasty meat that is called “spuntature” that are the least noble parts of the pig. In August you can taste them at the local festival that is dedicated to this delicious food. You can’t forget the taste of wine, the Doc from the Piceno area, Acquaviva Picena is one of the areas where they can produce the white wine like the Pecorino, the Passerina, the Red Offida and the Red Piceno. 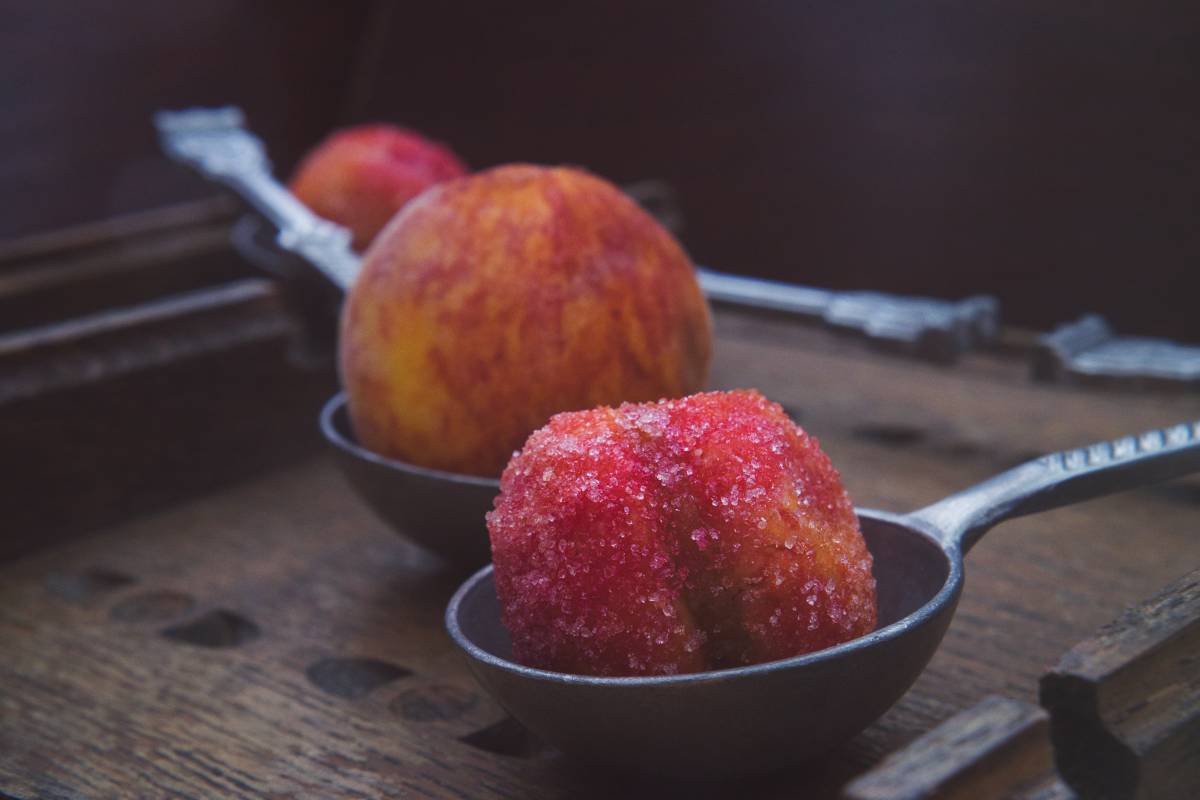 A real treat of Acquaviva Picena is “Sponsalia”, an historical re-enactment that offers you the possibility to plunge into a real Medieval atmosphere that has been attracting a lot of visitors since 1988. The invitation is for the wedding of Forastéria, the daughter of Rinaldo from Acquaviva, also called “Grosso” and Rinaldo Brunforte, Bonconte’s son and  Fidesmino from Brunforte’s nephew, the Lord of Sarnano and Frederik II’s Vicar in the year 1234 A.D. On this occasion, the stronghold welcomes a Medieval festival for three days and many events and shows are held. It’s an involving event mainly for the period costumes that you can see: they are real handcrafted masterpieces of care and knowledge. The climax of the festival is reached on the last day when the real wedding lunch is celebrated since you can taste real Medieval specialities. And besides the stronghold, the whole historical centre is involved in the recalling of the Middle Ages by displaying many street markets, falconers and street artists. 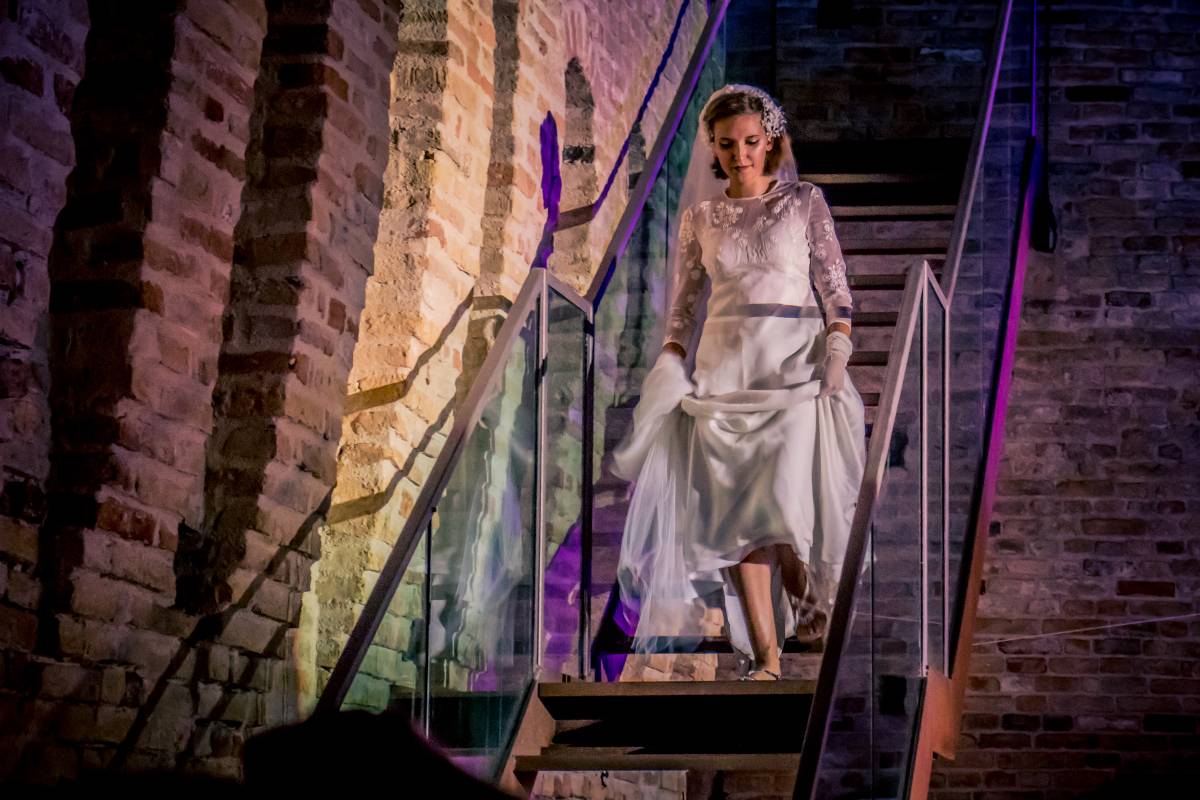 Knock, knock, is there anyone in the dwelling?
Black Gold of Atri
Forni di Sopra, a paradise in every season
More...