The ancient Città Alta, like an ancient village in the heart of Bergamo

Bergamo Alta, the ancient center of the city. From Piazza Vecchia to Piazza del Duomo among alleys, arcades, artisan shops and historical places. Among towers, palaces, museums, then the Cathedral, the Baptistery, the Basilica of Santa Maria Maggiore

The most evocative of the landing places in Bergamo Alta is certainly the ultracentennial funicular that for over one hundred and twenty years connects the lower city with its suggestive and picturesque upper part.

In a few minutes, from the modern soul of the lower Bergamo you climb to its delightful historical heart, an authentic village museum. Situated on a hill it is also called Città Alta and preserves the layout of its ancient medieval streets. 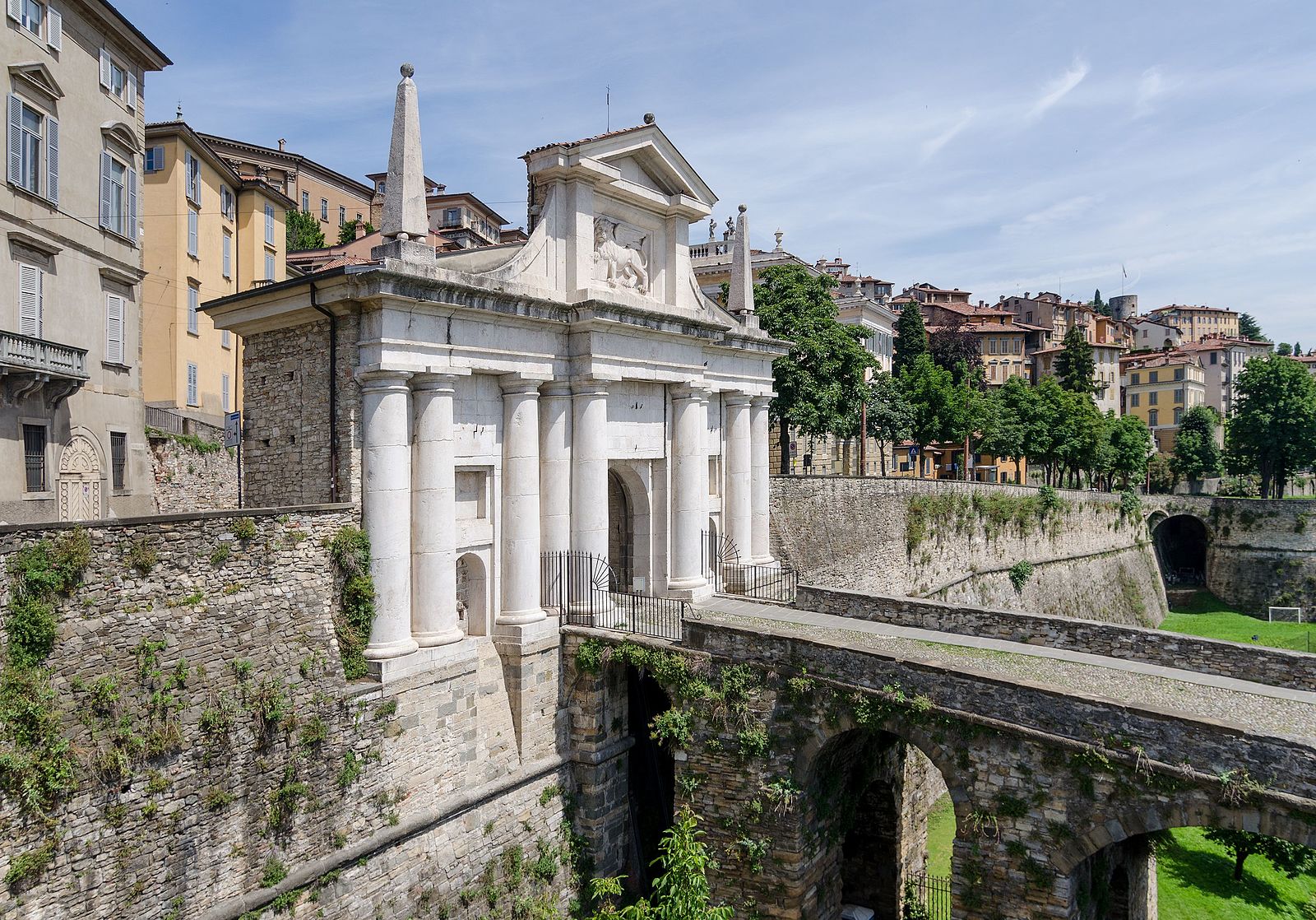 Enclosed within the walls, built in the 16th century during the Venetian domination, it is a tangle of hidden courtyards, alleys, arcades and artisan shops.

The heart of ancient Bergamo is Piazza Vecchia, the monumental center of the city, embellished by the Civic Tower which every evening, at 10 pm, beats its suggestive one hundred touches in memory of the closure of the city gates, along the walls, during the Venetian domination.

Also on Piazza Vecchia are Palazzo della Ragione, the seat of the municipal magistrates, with Gothic windows and the Renaissance loggia above which there is the Venetian style window surmounted by the lion of San Marco, and Palazzo Nuovo, seat of the Biblioteca Civica Angelo Never; in the middle of the square stands the Contarini fountain, adorned with sculpted lions.

A short walk from Piazza Vecchia stands the beautiful Piazza Duomo, another living room of the Upper Town, where there are other treasures including the Duomo, with a nineteenth-century façade and rich interiors, with paintings by Moroni, Tiepolo, Ricci and Previtali, dating back to the period between the sixteenth and the eighteenth century, and eighteenth-century furnishings. The Cathedral Museum and Treasury is also part of the Duomo complex. Also in Piazza del Duomo stands the Baptistery, a small octagonal building, the Basilica of Santa Maria Maggiore, a 12th-century Romanesque building, with the interior embellished with paintings, frescoes and sculptures by Luca Giordano, Talpino and Cavagna, Flemish tapestries and Tuscan, a renaissance wooden choir with inlays on Lotto's design and a Fantoni's baroque confessional. Complete the Piazza Duomo the Colleoni Chapel, a masterpiece of Renaissance art commissioned by Bartolomeo Colleoni, an Italian leader of the fifteenth century, in memory of his daughter Medea.

Then the intertwining of narrow streets, the old shops, the historical restaurants and the delicious confectioner's shops filled with delicacies, and other treasures of ancient Bergamo, from the Donizetti Museum to the Civic one of Natural Sciences to the Archaeological one.

Unmissable, in such a triumph of art, history and beauty, a greedy stop in one of the premises, be it a restaurant, a winery or a pastry shop.

Among the local delicacies there are casoncelli alla bergamasca with butter, sage and bacon. Also excellent is the Bergamo salami, with a particular coarse grain and sometimes flavored with pepper, garlic and wine. Taste from which you can not miss the classic polenta and osei dolce, a typical Bergamo specialty, made of sweet polenta covered with yellow almond paste, decorated with chocolate and marzipan birds.

Villages not to be missed if you are visiting Città Alta:

are you an Italian villages lover?
Join our Community and share you experiences!

The Superga Basilique: a charming votive baroqu...
Gubbio, the ancient village and the license of ...
The suggestive charme of Byzantine Ravenna
More...

RespirArt: the highest art park in Val di Fiemme
Mini cruise to discover the Amalfi Coast on a l... - from 1500 €
San Leo Festival, events in music