Share
Defined by Giosuè Carducci as the city of a hundred horizons, the village is one of the most suggestive historical centers in Italy. Collected within the ancient walls that branch off from the fortress, a 12th century fortress, it retains evidence of its millenary history in every glimpse. A place of charm on the gentle hills of Asolo, Asolo was a destination for poets and writers, artists and travelers, who found inspiration and harmony here. 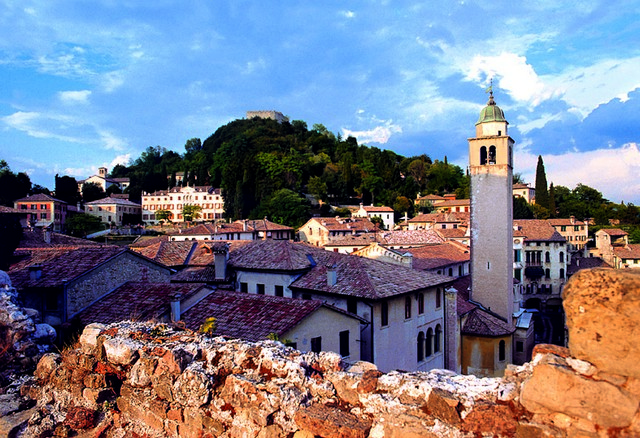 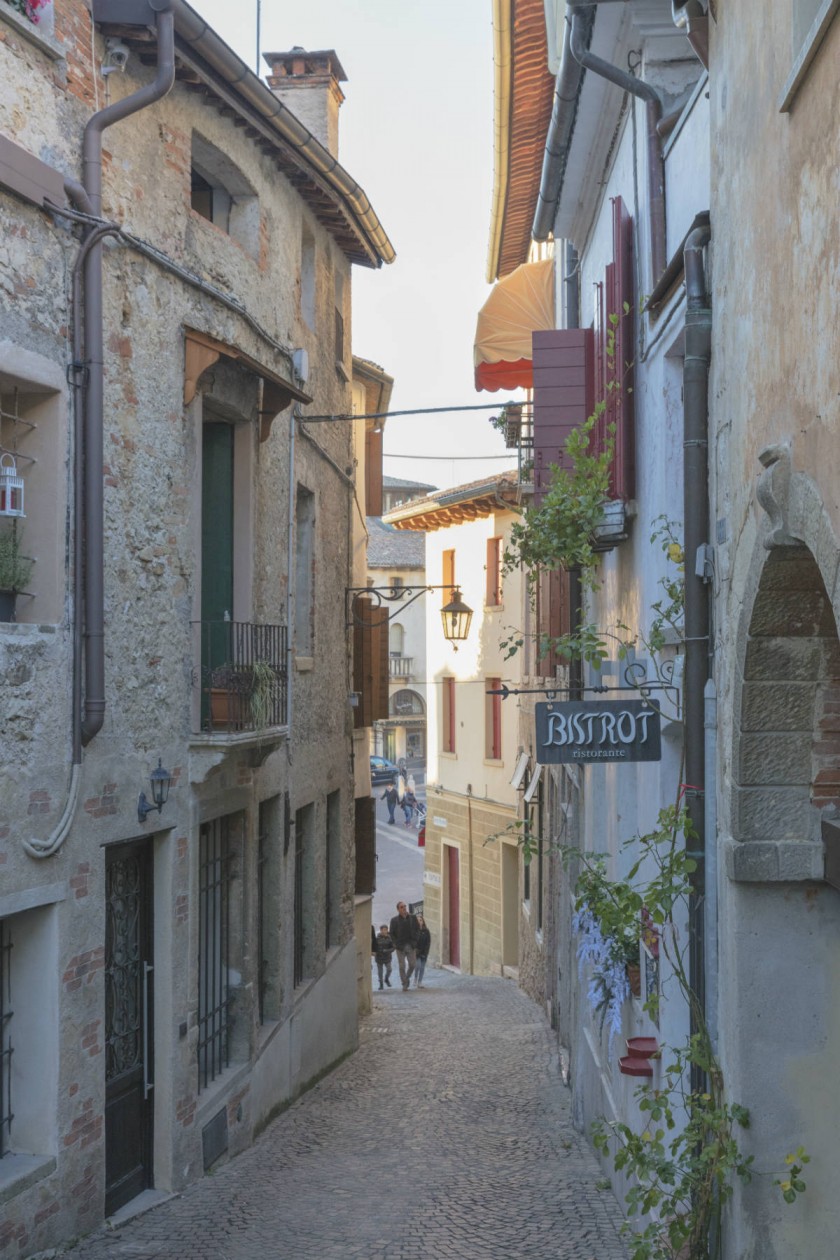 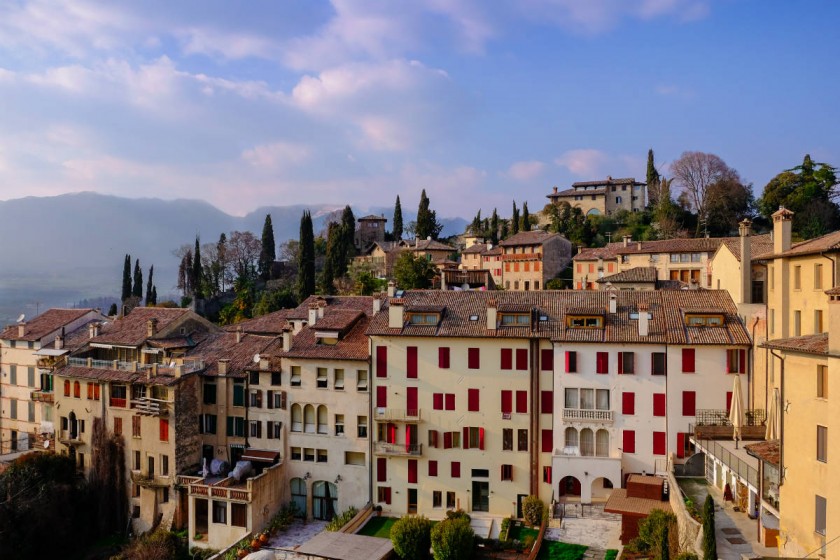 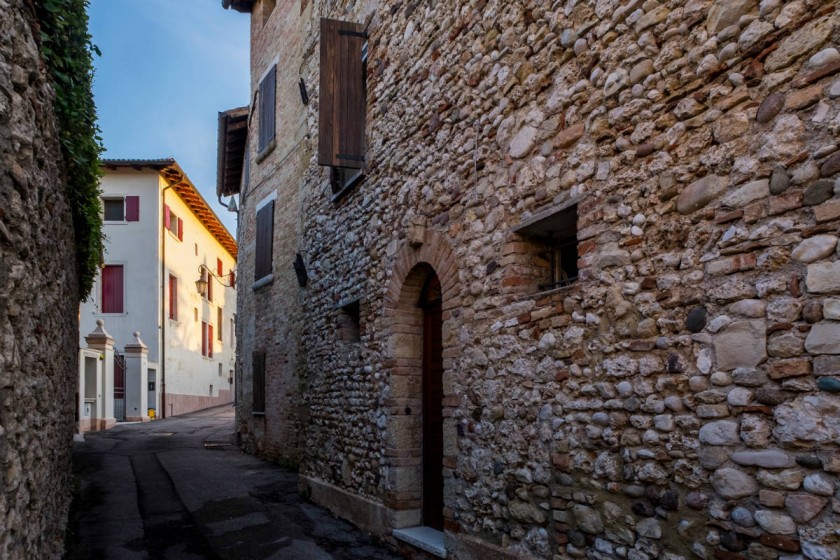 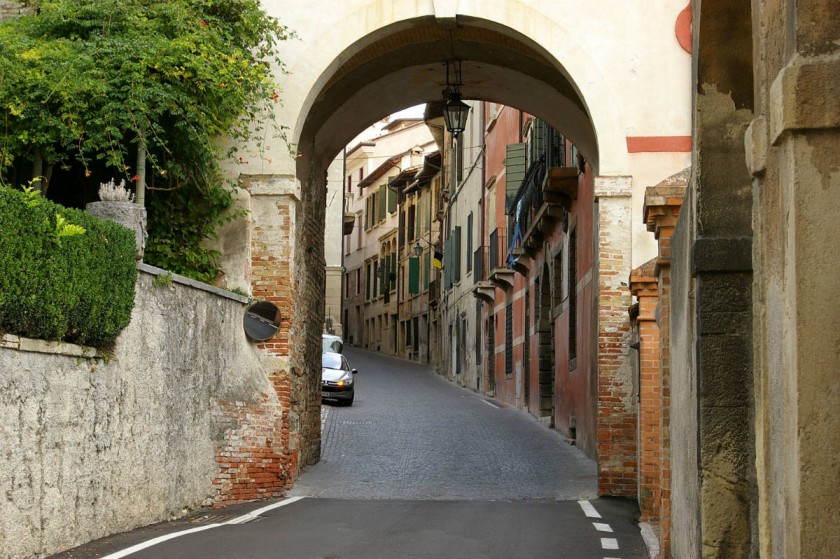 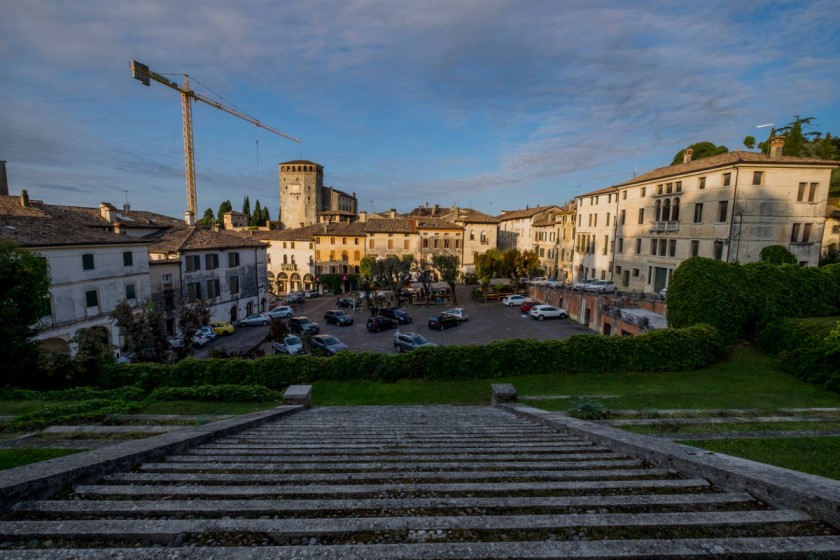 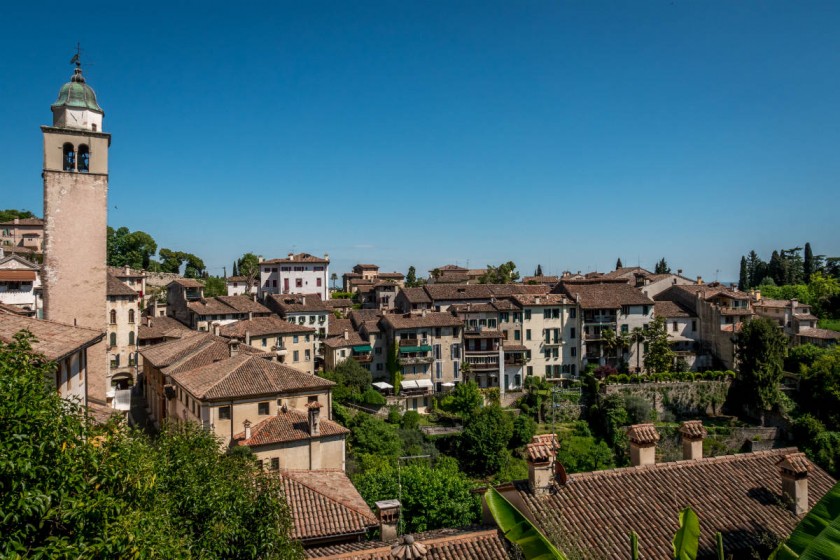 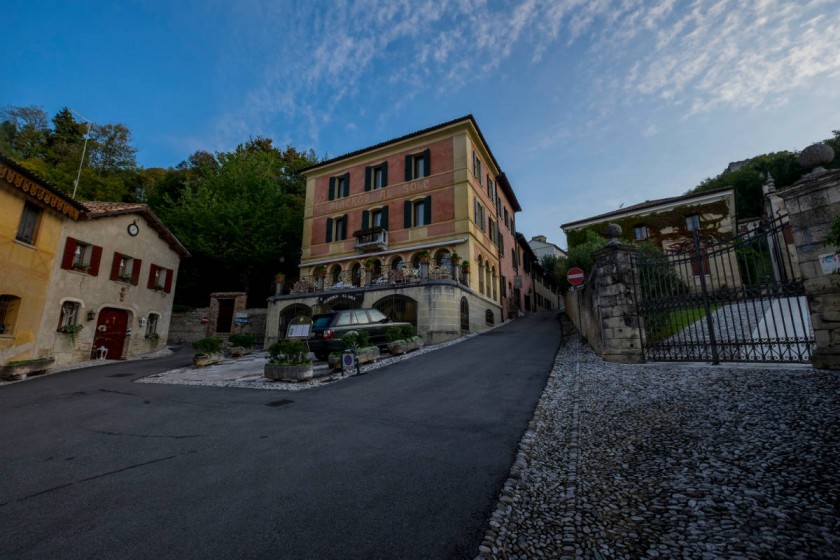 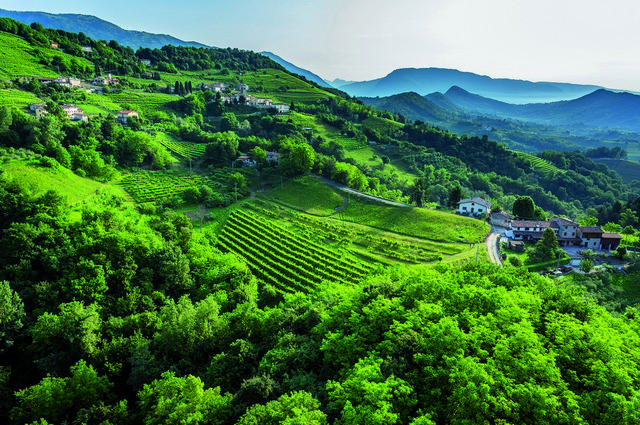 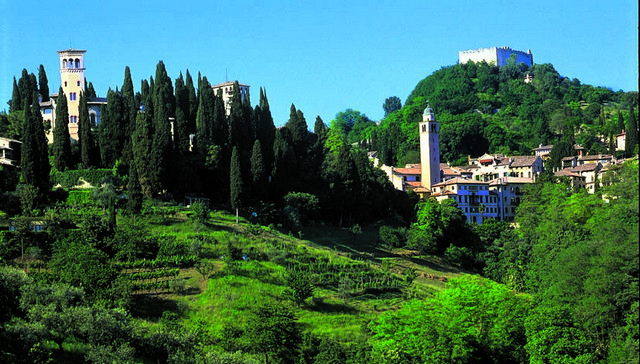 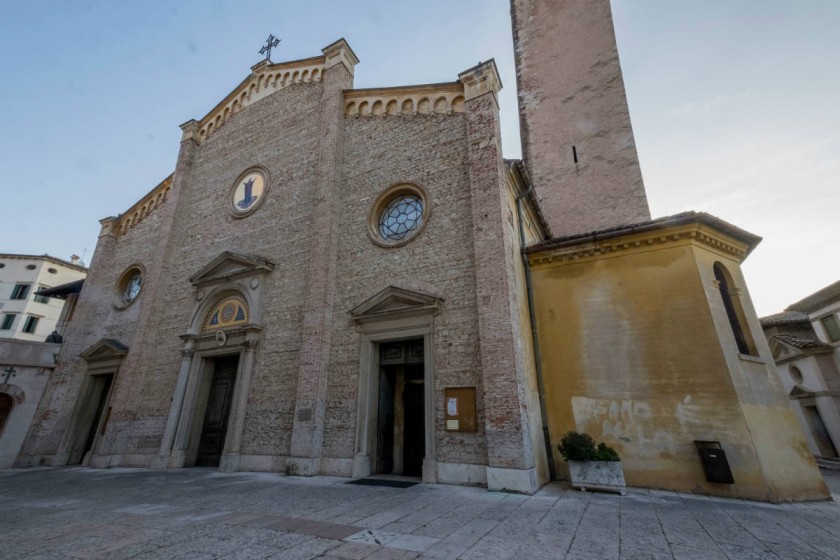 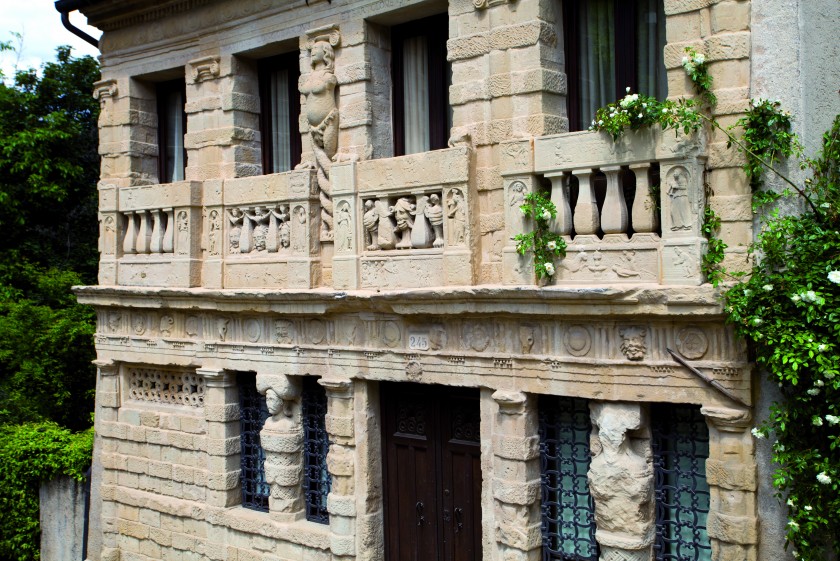 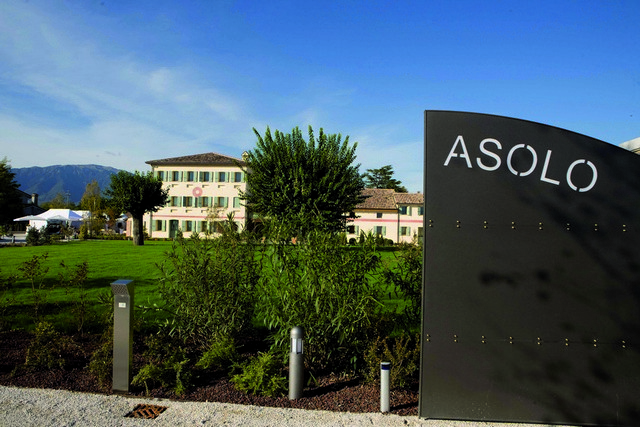 A look at Asolo

The origins of Asolo are lost in ancient times. Important crossroads for goods and livestocks, perfect point of transition between the Venetian plain and Belluno's Pre-Alps, it has always benefited from a great political, economic and cultural autonomy since Roman times. The amenities of the place then, perched on its gentle hills, did the rest.
Asolo became in the centuries an unmissable destination for artists and intellectuals, including Henry James and Eleonora Duse, just to name a few.

The history overlooks every corner of the streets: from the many and beautiful villas, private residences of famous people, to its castle, with its cut off tower (called Reata), which since 1489 hosted Caterina Cornaro, former Queen of Cyprus, and his entourage of artists, and which today is home to a new theater dedicated to Eleonora Duse;

From the fortress that dominates the village of Monte Ricco with the remains of the ancient Roman aqueduct (in dialect the Bot). And in addition to the history, the art of good living, the typical Venetian atmosphere that pervades the streets.

Romantic tranquility, peace of mind. Pubs, cafes, wine bars: placid places for the mind and the body, where you can enjoy a glass of Prosecco Asolo DOCG and a simple and genuine cuisine, according to the seasons and products that you can't find anywhere else.

Ancient traditions and local excellence. Some examples? White corn and Morlacco cheese; Bastardo cheese and Biso (pea) of Borso del Grappa; the dwarf beans of Levada and Monfumo apples; Maser cherries and honey of the Grappa area. Everything here is full of charm, history and culture. 'The city of a hundred horizons', as named by the poet Giosué Carducci.

Village of Asolo
Municipality of Asolo

Rocca of Asolo
the Rocca of Asolo, in Veneto, dominates the entire village.
Via Colmarion, 10, Asolo
Castle of Asolo
The Castle of Asolo, together with the rock, dominates the town of Asolo, in Veneto, from above.
Piazzetta E. Duse, 221, Asolo
Palazzo della Ragione
The building of the Loggia della Ragione hosts the Civic Museum of Asolo, that preserves archaeol...
Via Regina Cornaro, 3, Asolo
Cathedral of Santa Maria Assunta
The cathedral named after Santa Maria Assunta is located in the heart of Pieve di Soligo, in Vene...

Piazza Libertà, 7, Solighetto, Pieve di Soligo (Treviso)
23.35 Kilometers from Asolo
Oasis of the Grave of Negrisia
Between river Piave and the cultivated countryside, it can be easily reached from via Grave di So...

Via Verdi, 1, Ponte di Piave (Treviso)
43.58 Kilometers from Asolo
Church of San Bonifacio Martyr
Among the few ancient works, surviving the time, the floods of the Piave and the wars is the chur...

Hotel Asolo
The Hotel Asolo is located in the heart of Veneto, at the foot of the Asolo hills and the town of...

Via Castellana, 9, Asolo
Casa Vacanze La Casetta
La Casetta, in a quiet location, ideal for a relaxing holiday and good taste, it is the symbol of...

Via della Croce 13 - Farrò di Follina, Follina (Treviso)
23.27 Kilometers from Asolo
Agriturismo Da Muner
The Farmhouse From Muner to Pieve di Soligo, immersed in the green of the Treviso hills, is the i...

Via Zuanet, 2 - 31053, Pieve di Soligo (Treviso)
26.06 Kilometers from Asolo
B&B Casa di Campagna
The b&b Casa di Campagna is an old farmhouse immersed in the area where the DOCG Prosecco is prod...

Via Browning 182/183, Asolo
Ristorante all’Edera
It is surrounded by the hills where the Prosecco is produced.

Via IV Novembre 21 - 31051, Follina (Treviso)
23.09 Kilometers from Asolo
Osteria Al Castelletto
You cannot miss it! A real treasure trove of flavours, a place that definitely cheers you up.

Via Castelletto 3 - 31051, Follina (Treviso)
23.10 Kilometers from Asolo
Osteria Cicci da Alice
Here you have the opportunity to taste the most typical dishes of traditional Venetian cuisine, a...

Via Pian di Guarda 38, Follina (Treviso)
23.68 Kilometers from Asolo
Ristorante Mocambo
It is well - known for its on the spit and grilled meat, to enjoy next to the fireplace in the ce...

Via Pradegnan 21, Follina (Treviso)
24.96 Kilometers from Asolo
Trattoria All’Isola
The "kitchen without fires" of the Trattoria All'Isola in Treviso offers specialties not to be mi...

via Ospedale Provinciale, 15 – 31100 , Treviso (Treviso)
29.51 Kilometers from Asolo
Osteria La Muda
The tavern is located in one of the oldest buildings of the village of Cison di Valmarino, in the...

Via IV Novembre 21 - 31051, Follina (Treviso)
23.09 Kilometers from Asolo
Caffè Roma
A place of inspiration for writers, musicians and artists where guests can experience the philoso...

Piazza Roma 7, Cison di Valmarino (Treviso)
25.80 Kilometers from Asolo
Osteria Al Castelletto
You cannot miss it! A real treasure trove of flavours, a place that definitely cheers you up.

Via Erizzo 113/A - 31035 , Crocetta del Montello (Treviso)
9.70 Kilometers from Asolo
Cantina Col Vetoraz
The Col Vetoraz Winery, located in the heart of the Valdobbiadene DOCG area, produces wines of ex...

Via Castella 17/A, loc. Rua - 31020, San Pietro di Feletto (Treviso)
29.03 Kilometers from Asolo
Vigne Matte Winery
Above a splendid ridge has seat Vigne Matte Winery, near the village of Cison di Valmarino, which...

The villages in the hills
Italy is rich in villages, those small urban agglomerations with an intimate dimension and rarefied atmosphere that so enchant anyone lucky enough to set foot there: they are small jewels, born in a very distant past and developed around fortified citadels that still show all their secular grandeur.Among the most enchanting Italian landscapes there are the hilly ones, where hillocks, vineyards, castles and above all picturesque villages altern...
Continue
Big day in Asolo for Wyatt Rockefeller e Julie Fabrizio
Who has never dreamed of pronouncing “ I do" in the perfect location?
Continue