Share
For its happy geographical position it is called "the pearl of the Quartier del Piave". The capital and the two hamlets of Solighetto and Barbisano, despite the devastation of the First World War, offer truly interesting landscape and architectural beauties. Its center is characterized by the presence of some interesting buildings: the seventeenth-century villa Chisini-Daniotti, the contemporary Palazzo Ciassi and Morona, with the baroque church of Madonna del Carmine, Palazzo Balbi Valier, from the nineteenth century and the adjacent Borgo Stolfi.

A look at Pieve di Soligo 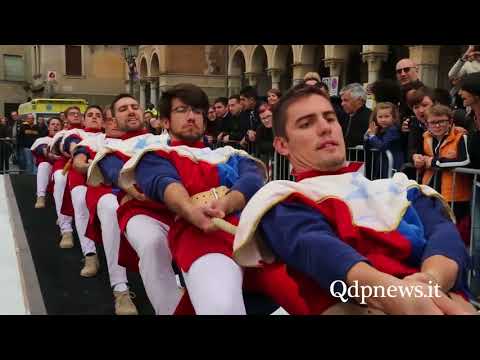 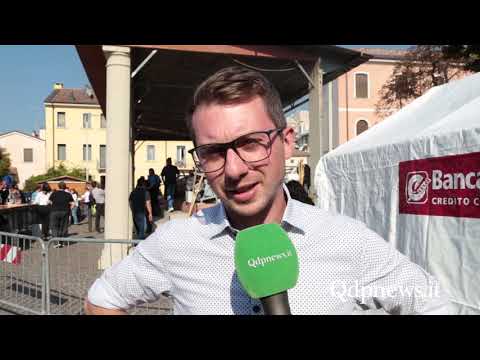 The name of the village derives from the ancient parish church that in the XIII century was divided into different territorial entities (from the Latin plebs), among which the parish church of Trevisan, on the right bank of the river Soligo, and that of the Contà, on the opposite bank. These jurisdictions were similar to the Longobards, from which the name of the neighboring Farra di Soligo comes, and they were the object of attention by religious and civil authorities, who intervened several times to settle the continuous diatribes, sometimes even in bloody events. , motivated by supposed jurisdiction rights that both boasted. This situation ceased, a first time, during the Napoleonic era, when the gen. Fiorella, in the name of Napoleon, elected Pieve di Soligo as a municipality and a judge of peace, in the Canton and District of Treviso. In 1797, following the Treaty of Campoformido, the Quartier del Piave passed, like the Venetian Republic, to Austria, remaining under this rule until the Third War of Independence.

Pieve di Soligo is one of the oldest rural agglomerations of the Quartier del Piave. Archaeological finds indicate a probable settlement already in Roman times. The historic center offers numerous architectural highlights worthy of interest, such as the seventeenth-century Villa Chisini-Daniotti, the coeval Palazzo Ciassi and Morona with the baroque church of the Madonna del Carmine, the nineteenth-century Balbi Valier palace and the adjacent Borgo Stolfi. Reaching Piazza Vittorio Emanuele II you can see the nineteenth-century Loggia dei Grani, while the main square overlook the "Battistella-Moccia" municipal library, the attached Municipal Auditorium "Battistella-Moccia" and the restored building of the Hotel Stella d'Oro. The imposing cathedral dedicated to Santa Maria Assunta, dates back to the early 1900s, and houses an altarpiece by Francesco da Milano (1540), a "crucifixion" by Giovanni Possamai, a "Virgin with the Child Jesus" by Marta Sammartini and the tomb of Giuseppe Toniolo. Near the cemetery, at the end of the Cal Santa, the path of the Via Crucis, stands the oratory of Calvario, a simple 16th century chapel with a beautiful crucifix and some stucco decorations.

Borgo Stolfi
Located along the river Soligo, it is one of the historic villages of Pieve. It occupies the right bank of the river, near the parish church, where the Soligo makes a bend, near the bridge. The architectural structures that constitute it, are typical two or three-storey buildings adjacent to each other, according to the traditional style of the villages of eastern Veneto. Here is also the old irrigation canal wheel mill powered by the Soligo.

Cal Santa
The Cal Santa is one of the oldest streets of the old town: it begins just east of the parish church, where there is an old village, and continues to the cemetery area, marked by a Via Crucis. This street is a topical place in the poetic corpus of Andrea Zanzotto, born in Pieve in 1921, which often transfigures it through the name of Contrada Zauberkraft, going to idealize and reconstruct its "anthropological substratum".

The hills of Solighetto offer, in all seasons, extraordinary opportunities for contact with nature and observation points on the plains and the hilly rope that precedes the Treviso Pre-Alps from Vittorio Veneto to Vidor, from Follina to Cison. The square of Solighetto is a small jewel of simple composure closed on its sides by the nineteenth-century parish church dedicated to the Immaculate Conception and the former Villa Brandolini, in the middle of the square a fountain. The church erected on the occasion of the proclamation of the dogma of the Immaculate Conception is an example of unusual executive coherence for the churches of the territory. An elegant bas-relief in white marble depicts the death of Count Gerolamo Francesco Brandolini Rota and on the ceiling stands the fresco by Giovanni De Min.

The river Soligo divides the village into two districts called Contà and Trevisan. There is a great rivalry between the two districts, so much so that on the occasion of the village feast called Lo Spiedo Gigante, among the various events, the Tug of War takes place, which was once held at the turn of the Soligo bridge.

Via Erizzo 113/A - 31035 , Crocetta del Montello (Treviso)
14.93 Kilometers from Pieve di Soligo
Rocca of Asolo
the Rocca of Asolo, in Veneto, dominates the entire village.

Via Colmarion, 10, Asolo (Treviso)
22.52 Kilometers from Pieve di Soligo
Castle of Asolo
The Castle of Asolo, together with the rock, dominates the town of Asolo, in Veneto, from above.

Via Regina Cornaro, 3, Asolo (Treviso)
22.90 Kilometers from Pieve di Soligo
Castle of Asolo
The Castle of Asolo, together with the rock, dominates the town of Asolo, in Veneto, from above.

Via Regina Cornaro, 3, Asolo (Treviso)
22.90 Kilometers from Pieve di Soligo
Church of San Bonifacio Martyr
Among the few ancient works, surviving the time, the floods of the Piave and the wars is the chur...

Via Colmarion, 10, Asolo (Treviso)
22.52 Kilometers from Pieve di Soligo
Oasis of the Grave of Negrisia
Between river Piave and the cultivated countryside, it can be easily reached from via Grave di So...

Agriturismo Da Muner
The Farmhouse From Muner to Pieve di Soligo, immersed in the green of the Treviso hills, is the i...

Via Casale Contravasser 7, Miane (Treviso)
7.43 Kilometers from Pieve di Soligo
Casa Vacanze La Casetta
La Casetta, in a quiet location, ideal for a relaxing holiday and good taste, it is the symbol of...

Strada al Codolà, 11 – 31049, Valdobbiadene (Treviso)
13.15 Kilometers from Pieve di Soligo
Hotel Duse
Located in the heart of the historic center, the Hotel Duse is the right place for those who want...

Via Castellana, 9, Asolo (Treviso)
24.13 Kilometers from Pieve di Soligo
Hotel Duse
Located in the heart of the historic center, the Hotel Duse is the right place for those who want...

Via R. Browning 190 - 31011, Asolo (Treviso)
22.79 Kilometers from Pieve di Soligo
Casa Vacanze La Casetta
La Casetta, in a quiet location, ideal for a relaxing holiday and good taste, it is the symbol of...

Via Castellana, 9, Asolo (Treviso)
24.13 Kilometers from Pieve di Soligo
B&B Casa di Campagna
The b&b Casa di Campagna is an old farmhouse immersed in the area where the DOCG Prosecco is prod...

Via Casale Contravasser 7, Miane (Treviso)
7.43 Kilometers from Pieve di Soligo
Osteria Al Castelletto
You cannot miss it! A real treasure trove of flavours, a place that definitely cheers you up.

Via Castelletto 3 - 31051, Follina (Treviso)
2.69 Kilometers from Pieve di Soligo
Osteria Cicci da Alice
Here you have the opportunity to taste the most typical dishes of traditional Venetian cuisine, a...

Via Caneve de Ronch 2 - 31030 , Cison di Valmarino (Treviso)
5.41 Kilometers from Pieve di Soligo
Ristorante all’Edera
It is surrounded by the hills where the Prosecco is produced.

Via IV Novembre 21 - 31051, Follina (Treviso)
7.28 Kilometers from Pieve di Soligo
Osteria La Muda
The tavern is located in one of the oldest buildings of the village of Cison di Valmarino, in the...

Via IV Novembre 21 - 31051, Follina (Treviso)
7.28 Kilometers from Pieve di Soligo
Ristorante Mocambo
It is well - known for its on the spit and grilled meat, to enjoy next to the fireplace in the ce...

Via Pradegnan 21, Follina (Treviso)
7.91 Kilometers from Pieve di Soligo
Osteria Cicci da Alice
Here you have the opportunity to taste the most typical dishes of traditional Venetian cuisine, a...

Villa Sandi, Crocetta del Montello (Treviso)
Valdobbiadene DOCG Extra Dry
Wine with a delicate and fruity scent. Ideal for a dinner with friends and for delicate and refin...

Treviso: weekend in the UNESCO heritage lands, between Pieve di Soligo, Follina and Cison di Valmarino.
The Prosecco lands have recently become UNESCO world heritage sites. They are one of the most extraordinary vineyard areas in the world, hills stretching between the great Venetian plain and the Dolomites, an area of ​​vineyards and cellars, hard-working people and bottles that have made and make the world dream.Pieve di Soligo, Follina and Cison di Valmarino are some of the villages of this noble land, appreciated and, today, rightly rewarded...
Continue
Recipe: the Pinsa, the typical Veneto dessert of the Epiphany
ALSO FOR VEGETERIANS The Pinsa, or Pinza, is a typical dessert of Veneto, Friuli and some valleys of Trentino. Even with the same name are also desserts completely different depending on the location, but in the northeastern regions has some simple and special features, and you can find two very distinct variations, the leavened Pinsa, typical of the area to the left of the Piave, and the unleavened Pinsa, typical of the area to the right of the Piave. The ingr...
Continue