Share
Village of ancient origins, Narni preserves a very rich cultural heritage and remarkable monuments from the medieval period, such as the cathedral of San Giovenale. In the highest part of the spur on which the village lies, stands the majestic Albornozian fortress, built in the second half of the fourteenth century.

A look at Narni 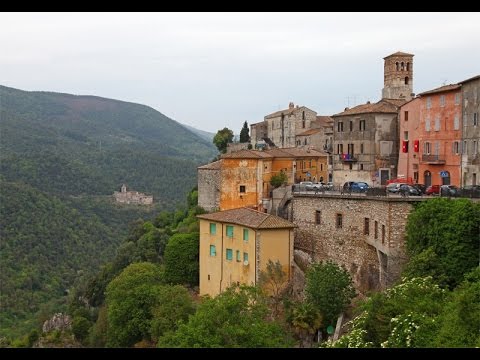 lying on the last extension of the Monti Sabini toward the Terni basin the village of Narni has the unique characteristic of being defense for half the walls in double castle and to the other party by the landslide on the valley of Nera, impervious and composed of many rocky spurs.

The area around the village of Narni (Narnia in Latin) was already inhabited in the Palaeolithic, as attested to by the finds in some of the caves which comprise the territory. Around the beginning of the first millennium the Osco-Umbri settled in the area by calling Nequinum their establishment.

In 300 B.C. the citadel returned in the interests of Rome, that did besiege with the console Appuleio Fifth Pansa obtaining however fruitless results view its inaccessible position. It took over a year to fulfill the undertaking, which took place in 299 B.C. thanks to the betrayal of two local people that allowed the Romans the entrance between the walls. Thus became a roman colony, and strategic center along the via Flaminia. To punish the support given to the Galli, and whereas Nequinum bad luck (in Latin, nequeo means "i", and nequitia means "useless".), the Romans changed the name of the city in Latin of Narnia, from the name of the nearby river Nar, the current Black.

Along the river Nera, near the hamlet of Stifone, where formerly there was the port of the roman city, was in fact recently identified the archaeological site of what looks like a shipyard romano. Became a Municipium in 90 B.C. In 27 B.C. the emperor Augustus did pave the entire via Flaminia, place the old bridges and building new ones, according to several authors even the great bridge on the Nera Under Narni was built in this period, and in fact takes its name.

In the year 30 A.D. was born there Nerva, last italico among the Roman emperors. The paleochristian era is the quote of Narnia by Tertullian, in Apologeticum, in a list of "false gods" drawn up in the first century, as the city was ancient dwelling of God Visidianus (Narnensium Visidianus). In 96 A.D. the Senate and the Roman people nominarono emperor narnese Cocceio Nerva, under his government the Romans saw return the era of freedom, according to Tacitus those 16 months of reign were a period of public happiness. Among other things he cease persecution against Christians, restore the via Appia and Valeria, build the hole and the Temple of Minerva.

A legend narnese wants, in medieval times, in the territory between Narni and Perugia there was a griffon vulture, against which the two cities, between them in war, were coalizzate. Once killed, as trophy Perugia was held the bones of the griffon (white) and Narni skin (red). For this the Griffon of Perugia is white and that of Narni is red.

After the fall of the Western Roman Empire (476 d.C), Narni was in trajectory with respect to the pursuit of conquest of the barbarian hordes directed to Rome, and saw then dismantled their walls (545 d.C.) by Totila, King of the Goths, but according to some authors the bishop of the city S. Cassio nor prevented the destruction. Successive to the Goths the Lombards and founded the great Duchy of Spoleto, which extended to Lazio, the city became a fortress of the border between the powerful Duchy and the Roman state. Alternatively lost and reconquered by the Dukes of Spoleto and belonged for a short period to the property of the Countess Matilde di Canossa, in 741 the city was assigned by the Franks at the state of the Church.

Beginning from the XI century the medieval town (you rebel in 1112 to Pope Paschal II in 1167 Federico Barbarossa, and in 1242 will certainly support Rome and Perugia against the empire) casts its territorial influence on San Gemini, Stroncone, Calvi, Otricoli and Castiglione. In XIl century rises the Cathedral, immediately outside the walled perimeter ancient that is expanded to include the religious pole.

The medieval urban draws an irregular plant, which progressively occupies the hill having as hinge today's piazza Garibaldi.
The transformations are radicals: The Platea Major replaces the roman forum, you construct the large civil and religious buildings such as the Palazzo del Podestà, Palazzo dei Priori, the Cathedral of San Giovenale, the churches of Santa Maria Impensole, San Domenico and Sant' Agostino decorated with works of renowned artists such as Benozzo Gozzoli, Vecchietta, Pier Matteo d'Amelia, Spain.

In the XIV century Narni joined of the areas controlled by the papacy thus losing its independence, and under the pontificate of Gregory XI is built by Cardinal Albornoz an imposing fortress that dominates from the top. With the loss of political autonomy starts to economic decline in the cultural and in which is inserted the episode of the bag of the Lanzichenecchi (17 July 1527) and the plague that they brought to the following; the city was not destroyed but the human losses were considerable. In subsequent years the survivors started reconstruction and some illustrious citizens yielded prestige to the city, the ark, the Cardoli, the Eroli, Cesi and Sacripante. In 1664 was founded the Municipal Library.

The French Revolution and its armed completely change the old sorting in Italy: in 1789 Narni is part of the first Roman Republic, fall which is restored the papal dominion. During the period the revolutionary and Napoleonic Narni back then to follow the fortunes of the Papal State, subsequently annexd to the French Empire. After 1814 the restoration seeks to strengthen the old structures and the ordering of the state, but the new ferments are not less; in 1831 Narni joins the ephemeral revolt against Gregory XVI . In 1849 the second Roman Republic lit hopes and illusions, and the progressive evolution of the Risorgimento, involving largely narnesi patriots, leads to the annexation of the Umbria Italy, formed in 1859-60. In 1856 is inaugurated the municipal theater with the representation of La Traviata by Giuseppe Verdi. On 23 September 1860, after that 21 of the same month, the city was occupied by Piedmontese troops, surrenders to the Rocca, thus putting an end to the papal dominion on Narni with great enthusiasm of the population.

The birth of the feast that characterizes the village of Narni gets lost in the maze of history. Only thanks to the reform of the statutes which occurred in 1371 it has certain notice of the "Race to the Ring". The festivities in honor of the Patron Saint Giovenale lasted three days and foresaw the rites and ludi that gathered in the city the religious authorities and municipal authorities, representatives of the castles under the jurisdiction of the city. The municipal authorities in organising events and races various thus enhancing the skills of the young narnesi demonstrating their preparation in the defense of the city against anyone attentasse to his freedom. Three days before the feast of the patron saint on 3 May, the "Dominus Vicarius" had read the "Banno" with which he invited the youth of the three Terzieri citizens to compete and all the people to celebrate in honor of San Giovenale. After paying tribute in the Cathedral to the mortal remains of the Saint, the people gathered in Piazza dei Priori, from where they left to shift and in order of importance the knights of Terzieri spearhead the gallop toward the ring trying to slip it with the lance. The ring was placed at the beginning of Via Maggiore (today Via Garibaldi) and was held at a certain height from the ground by two soft cords pulled between the opposing blocks.

Retracing the consolidated tradition in time, every year, in the two weeks preceding the Second Sunday of May, Narni relives passionate days and fascinating. A historic center that sees become through environments of medieval alleys and squares, pageants and events of a cultural nature and artistic, parades in costume with clothes wisely and reconstructed philologically to such a point as to seem living pictures. Next to this is added the hot climate of an equestrian tenzone which is second to no other historical commemoration italiana. The event involves the whole city, still today mediaeval agglomeration perched, firmly and with tenacity daring, on a mountain full of greenery and cliffs where the eye has difficulty to be satiated because it offers the nature and history of the place. For more than fifteen days, between various events and parades, people gather in inns or taverns almost to prepare with the heart and mind to the final apotheosis: a quick run and measured in the precision that a group of knights arditi tackles, because a Terziere at the end should prevail over the other winning the silver ring and it boast glory for the whole year.

Village of Narni
Municipality of Narni

the Municipality is part of:
Strada dei Vini Etrusco Romana in Umbria

Via dei Frati, 62, Greccio (Rieti)
20.23 Kilometers from Narni
Casteldilago
The small village of Casteldilago is located near Arrone, in Umbria.

SP20, Bomarzo (Viterbo)
21.93 Kilometers from Narni
Monsters Park
The Monsters Park is a monumental complex that is located at Bomarzo, in Lazio.

Via Santa Maria Maggiore, 18, Labro (Rieti)
23.30 Kilometers from Narni
Cahen Mansion
Villa Cahen is located inside of the Selva di Meana, near the village of Allerona, in Umbria.

Strada Provinciale 50, Allerona (Terni)
55.32 Kilometers from Narni
Casteldilago
The small village of Casteldilago is located near Arrone, in Umbria.

Race to the Ring

Recipe: Panpepato, the Christmas dessert of the Terni villages
It has ancient origins, the Panpepato (a sort of gingerbread), the Christmas cake par excellence of Terni and the villages of the territory. It seems to date back to the sixteenth century and the legends hover around this typical Christmas dessert that triumphs on the tables of the villages of Terni even until Easter. Tradition, in fact, wants at least one Panpepato to be kept pending the Resurrection festivity. Each family has its own recipe with the appropriate variations, but the basic ingredients are always the same, provided by ...
Continue