Share
Verezzi, nestled along the Riviera delle Palme, between Finale and Pietra Ligure, is made up of four villages characterized by narrow streets and stone buildings. Walking through the village you can see the houses leaning against each other, the white terraces and the "visible" gardens.

Alley that connects the square with the districts of Roccaro 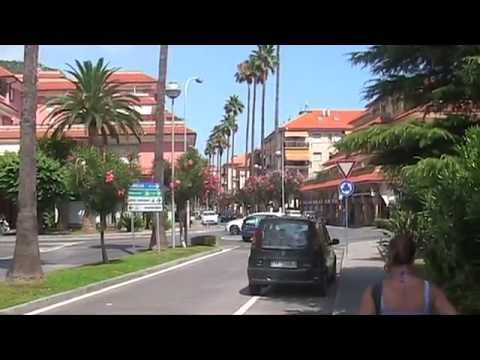 Set along the Riviera delle Palme, between Finale and Pietra Ligure, Borgio Verezzi is divided between Borgio, located on the sea, and Verezzi, on the hill.

Among the main places worth visiting include: the parish church of San Pietro at Borgio, built on the ruins of the ancient castle of Burgum Albinganeum in 1789; the Sanctuary of Our Lady of Good Counsel, always at Borgio, within the local cemetery, dating back to the late middle ages. To Verezzi instead we find the Church of Sant'Agostino, near the homonymous square, seat of the annual festival theater, dated back to the XIV century.

The caves of Borgio Verezzi, said "Valdemino", are a classic example of the karstic phenomenon, the structure of which was generated in time by the slow erosion of water through the rock. The cavity was discovered in 1933.

The Theatrical Festival of Borgio Verezzi, founded by Enrico Rembado and Maria Valentinotti Rossi in 1967, was born as a tourist initiatives at local level which took instead, with time, prestige up to flourish in the framework of the festival at national level. The festival takes place always in the summer period in the ancient village of Verezzi, mainly in the months of July/August, putting in scene the classic par excellence (including Goldoni, Shakespeare, Pirandello); it was later decided to propose a theme for use alongside classics also contemporary performances or unusual (cite certainly Hell and Purgatory Dante, set in the old quarries of fossils of verezzina hill, a theatrical route innovative and highly suggestive).

In the agricultural field active is the cultivation of fruit and vegetables, species of olive trees, almond trees, carobs and fruit trees; limited local and is the industrial production in the food sector of olive oil and wine.

To Borgio Verezzi is and was extracted the pink marble of Verezzi, commercially known as stone of Verezzi or stone Lara. It is a natural limestone used for the interiors.

The Municipality is part of
Borghi più belli d'Italia

Via Vincenzo Maglione, 19, Laigueglia (Savona)
24.22 Kilometers from Verezzi
Parish Church of San Michele
The church of S. Michael is one of the first appearances built on place. The distance from the se...

Via Vittorio Veneto 4, Verezzi
Hotel Ideal
The structure was born in the early '900 as a private house and then in 1988 it was converted int...

Via Aurelia 35, 17026, Noli (Savona)
9.23 Kilometers from Verezzi
Miramare Hotel
Just steps from the historic center and the beaches of Noli, the Miramare Hotel will seduce you w...

Via Andrea Doria, 18 - 17053 , Laigueglia (Savona)
24.10 Kilometers from Verezzi
Hotel Capo Noli
In a strategic position, directly on the sea, overlooking the natural Gulf of Noli, the Hotel Cap...

Vico Giacometto, 9 - 17053 , Laigueglia (Savona)
24.11 Kilometers from Verezzi
Hotel Giannina
An unforgettable holiday in Laigueglia, a fabulous tourist resort on the western side of the Ligu...

Via Andrea Doria, 18 - 17053 , Laigueglia (Savona)
24.10 Kilometers from Verezzi
Miramare Hotel
Just steps from the historic center and the beaches of Noli, the Miramare Hotel will seduce you w...

Via Roma 16, Verezzi
Bar Torre Antica
A restaurant where time seems to stop.

Corso Italia, 26 17026, Noli (Savona)
9.38 Kilometers from Verezzi
Opiﬁcio di Verezzi
The factory is located in the main street of the wonderful village of Verezzi.

Via Roma 6, Verezzi
Pasticceria Scalvini
The choice of prime ingredients and the faithfulness to the best recipes of the bakery tradition...

Via Cristoforo Colombo, 3 - 17026 , Noli (Savona)
9.36 Kilometers from Verezzi
Martini Tobacco Shop 1937
This famous tobacco shop was established back in 1937. The passion for tobacco has been passed al...

Via Dante,65 - 17053, Laigueglia (Savona)
24.28 Kilometers from Verezzi
Martini Tobacco Shop 1937
This famous tobacco shop was established back in 1937. The passion for tobacco has been passed al...

Passeggiata C. Colombo - 17053, Laigueglia (Savona)
23.87 Kilometers from Verezzi
Le Palme bathing establishment
If you want to enjoy a relaxing and peaceful beach holiday, this is the place for you.

Corso Badarò - 17053, Laigueglia (Savona)
24.55 Kilometers from Verezzi
Le Palme bathing establishment
If you want to enjoy a relaxing and peaceful beach holiday, this is the place for you.

Cycling among the most beautiful villages in Liguria
Italy is an extraordinary country, whose historical, artistic and naturalistic heritage makes it a favourite destination for the summer of 2020. Liguria is one of the most fascinating regions, nestled like a jewel between the mountains and the Tyrrhenian Sea: there are many ways to travel to discover Liguria, but the bike is the perfect way for those who love contact with nature for an absolutely green experience.A recommended route to discove...
Continue
Recipe: Snails by Borgio Verezzi
During a stay in the Riviera delle Palme, in the beautiful village of Borgio Verezzi, you can't miss a taste of the well-known Lumache alla Verezzina. One of the oldest dishes in the region whose name derives from the charming seaside village. It is a summer dish traditionally served on the 22nd of July, on the occasion of Santa Maddalena, but today you can taste it in many typical restaurants in the area.Protagonist of the homonymous festival that takes place every summer on 13 and 14 August, now the recipe h...
Continue