Share
Pearl of the Mediterranean, in the north-western tip of Sardinia, not far from Sassari: La Pelosa, its symbolic beach, is one of the most beautiful in Europe. Fishing is the basis of local cuisine, whose main specialties are sea urchins and other seafood, shellfish and tuna bottarga. 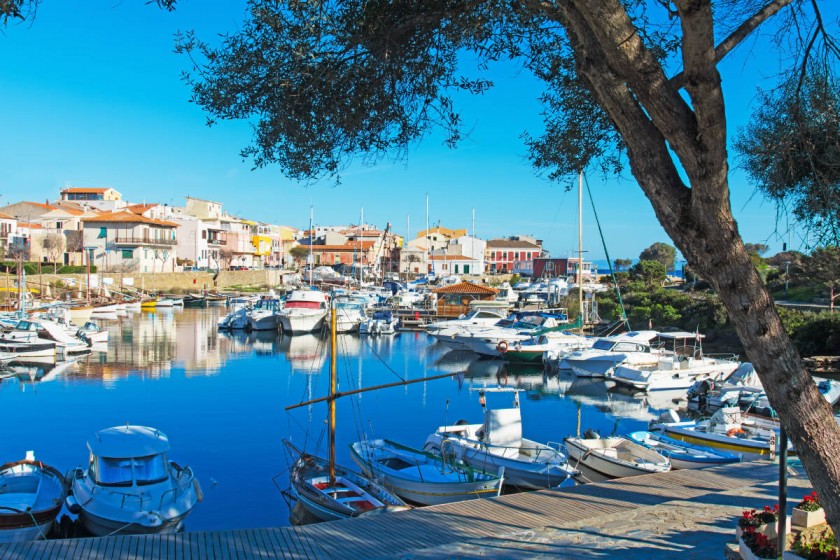 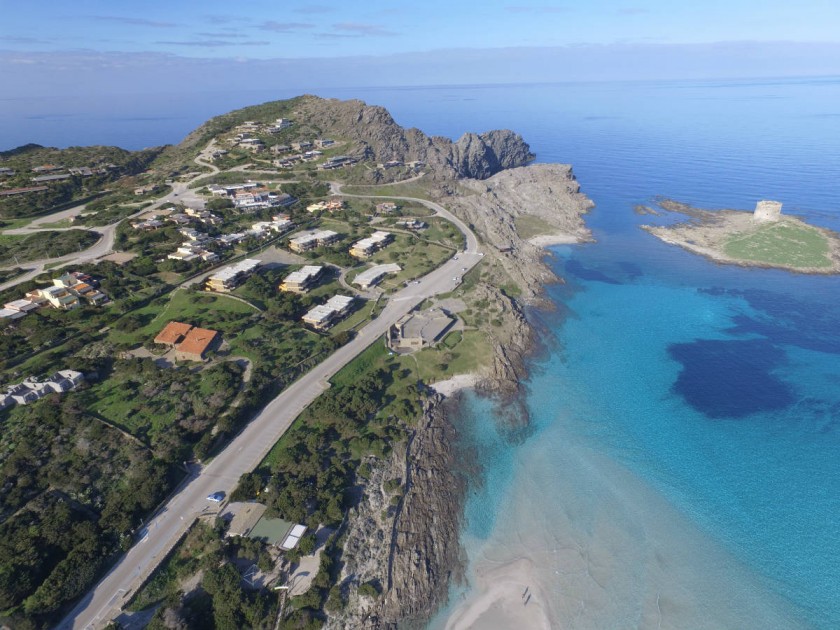 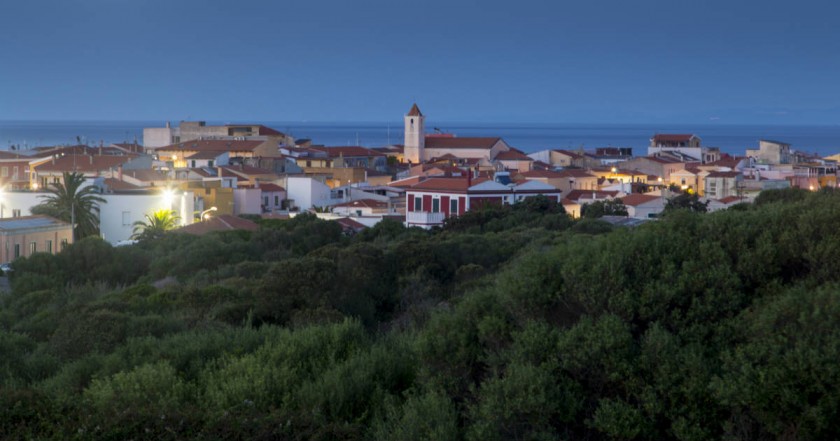 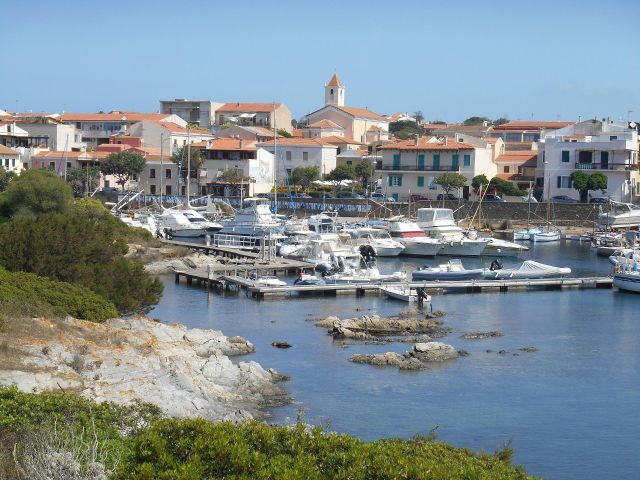 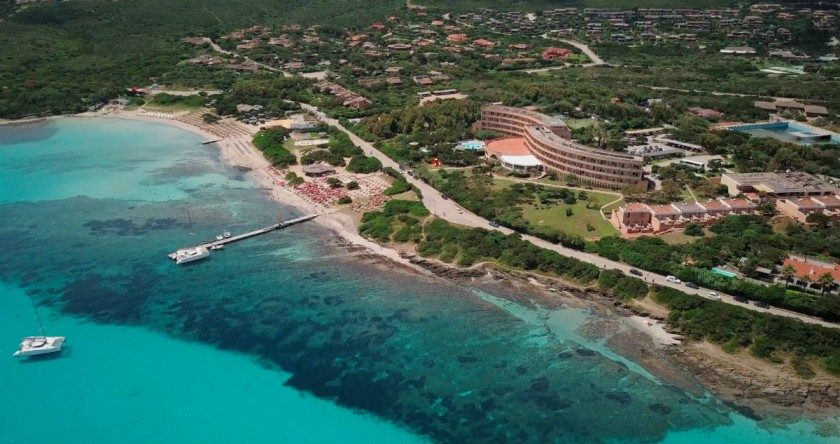 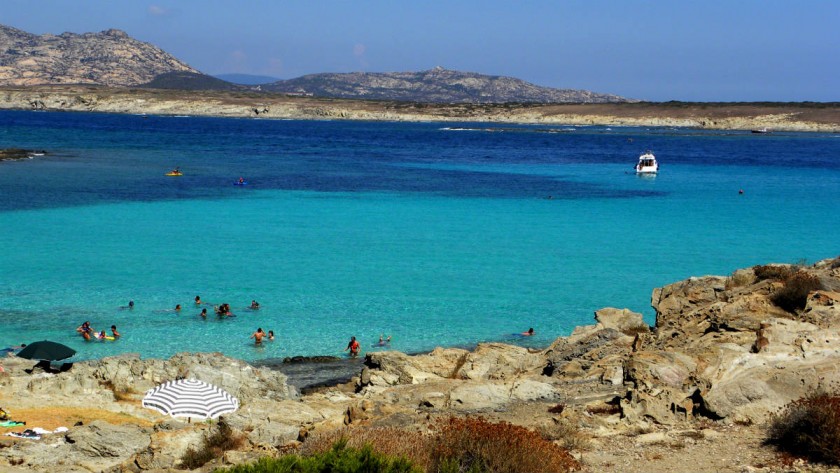 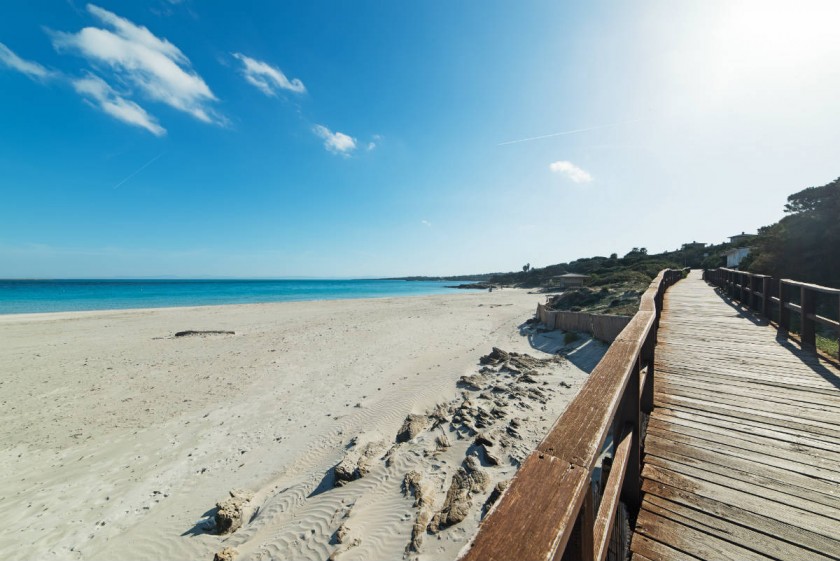 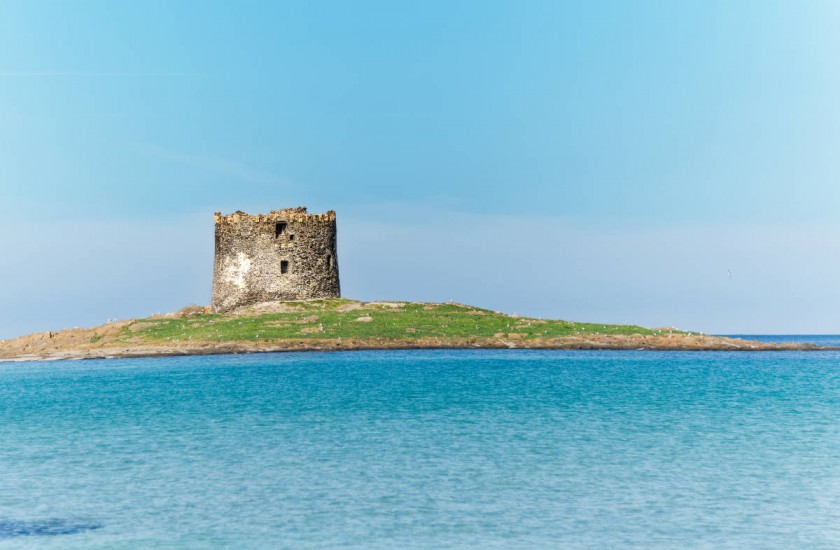 panoramic view of La Pelosa sea and its Aragonese tower 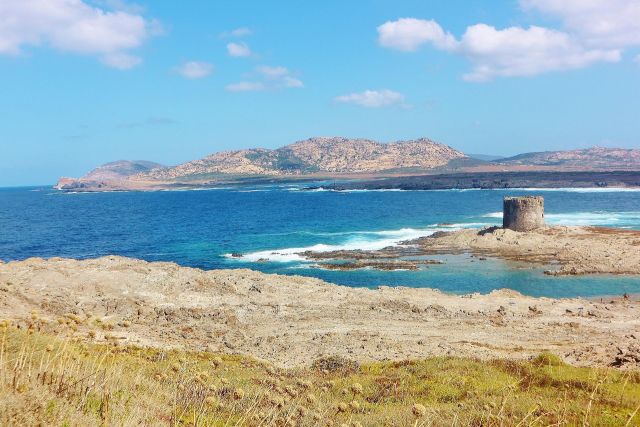 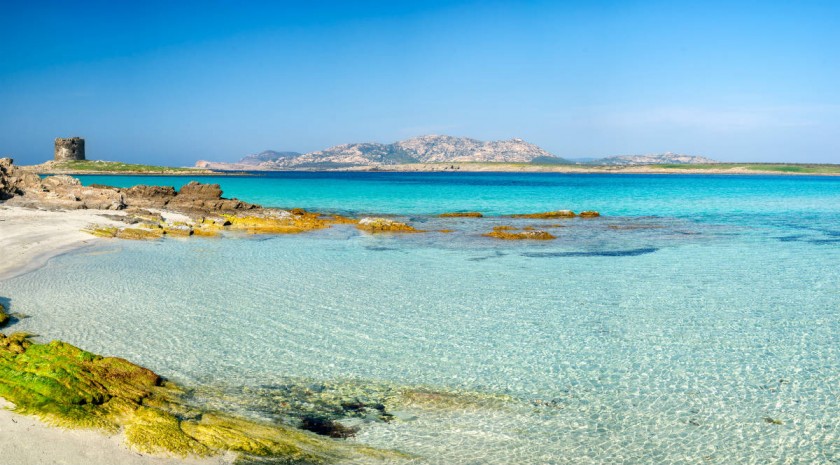 The Village of Stintino (Isthintini in Sassari, Istintinu in Sardinian) on the last strip of land of Sardinia that from the plain of the Nurra extends toward the island of Asinara, in Sardinia. The coast toward the sea of Sardinia is called "sea of Out" and alternates cliffs and coves of sand and rocks at the end of small valleys, as Biggiu Marinu (i.e. "Bue Marino", the Sardinian name of monk seal), also known as the valley of the moon, Coscia di Donna and Cala del steam.

The origin of the village of Stintino is due to the decision of the Italian Government to establish on 22 June 1885 on the island of Asinara in Località Cala Reale, the first lazzaretto for sanitary use together a penal colony in the seaside resort of Cala Olive Oil. In that moment we counted on the island 54 families with about 500 people, half the pastors of Sardinian origin and the other half fishermen, both camoglini that ponzesi; of these residents to Cala d'Oliva were fishermen originating in Camogli, that had moved attracted by more economic opportunities and by the presence of the tunny-fishing of Saline; while the inhabitants of stoves and Cala Reale were pastors and Sardinian farmers. It is possible that both groups had already adopted the Sassarese, going to accentuate the influence ligure present from the beginning. Only 45 families left the Asinara to settle in costruenda Stintino in founding the "Communion of 45", the other overtook other shores. The master plan divided neatly a narrow peninsula between the two arms of the sea (now Porto Vecchio and Porto Nuovo/Porto Mannu), who took the name of isthintìnu sthintìnu or, by the term sassarese "intestine or casing", then italianized in Stintino.

Among the religious events, may takes place at a small country church, the Feast of Sant'Isidoro in Ercoli, and on 8 September the Madonna of Defense; the simulacrum of the saint patron of the village is transported from the boats of the fishermen of the Confraternity in a procession to the sea to recall the foundation of 1885.

Fishing is at the foundation of local cuisine, whose main specialities are Ricci and other seafood, shellfish and the tuna bottarga. Among the dishes potato soup and lobster with local fish, octopus in agliata, the octopus at stintinese i.e. an octopus salad with potatoes, vinegar, parsley and sometimes onion, and among the desserts tumbarella.

The port of Stintino still hosts numerous sailing boats Latin, that after the advent of motor boats have found new life in diportivo tourism and in sailing regattas.

The main tourist attraction is the beach of the Pelosa, located in the extreme edge north-west coast of Sardinia, and overlooking the Gulf of Asinara and on the homonymous island, is distinguished by a white sand and blue sea-turquoise from the seabed is very low. Immediately facing a second smaller beach called The Pelosetta is located the islet within walking distance of the aragonese tower, built from 1578 and call Pelosa Tower, and the Piana Island, belonging to the municipality of Porto Torres as the Isola Maggiore, which hosts a Spanish tower high 18 meters called Tower of Finance, built in the XVI century and restored in 1931. The Piana island was used in the past as pasture thanks to transhumance carried out on fishing boats; belonged to the family of Berlinguer and was ceded to the state to the condition that it was kept in its natural state. Other beaches on the eastern coast are those of the Salt Pans, Il Gabbiano, yet, Ezzi Mannu, Pazzona and Punta Negra. At about 3 km from the village there is the pond of Casaraccio, and about 15 km in the area of Sassari the pond of Pilo; both represent important reproductive reserves for the avifauna. In the territory of Stintino is present also the pond of the Salt Pans.

In June 2016 was inaugurated the Tonnara Museum (MUT), with relics, texts and images, tells the story of the Tonnara di Stintino but also of other tuna in the Mediterranean, in addition to presenting scientific studies on the typology of tuna caught in this area, the Thunnus thynnus.

Via Ilva, 1 - 07024, La Maddalena (Sassari)
103.65 Kilometers from Stintino
Santa Degna Park
A short distance from the village of Aggius, the Santa Degna Lake is a wild place and of enchanti...

Largo San Francesco, 14, Alghero (Sassari)
42.92 Kilometers from Stintino
Sulis tower
Also known as Torre dello Sperone, Torre Sulis was built in the first half of the 16th century an...

Via Pretura, Aggius (Sassari)
70.69 Kilometers from Stintino
= distances as the crow flies

Find where to sleep in Stintino

Str. Vicinale Paris Giega, Alghero (Sassari)
35.38 Kilometers from Stintino
Bajaloglia Resort
An oasis of wellbeing and relaxation, where the scent of the Mediterranean vegetation will inebri...

Our news about Stintino

Discovering Sardinia with the 100 Towers Walk
Visiting 105 towers scattered across 88 Sardinian municipalities: this is the aim of the 'Cammino delle 100 Torri, in Sardegna', a slow route that takes visitors to some of the most beautiful places on the big blue island in about 60 days. The itinerary crosses 450 kilometres of beaches and endless expanses of sea that are lost in the horizon of spectacular panoramas, sunsets with spectacular colours and pieces of Italian history that show the...
Continue
Itinerary among 5 of the most suggestive villages of northern Sardinia
Our journey begins after a ferry crossing to Olbia where, after visiting the historic center and its wonders, we will be able to leave by car following the SS125 northwards, to Palau, to board a boat bound for our first destination , the island of La Maddalena and its village. The journey, starting mid-morning from the port city, should last about an hour and a half, therefore, upon arrival we can enjoy an excellent fish-based lunch in one of ...
Continue
Discovering 7 villages in Sardinia choosing the right ferry
Summer is almost upon us and the desire for holidays is increasingly felt. Among the most popular destinations in Italy, Sardinia offers innumerable tourist solutions, among which, of course, the Sardinian villages, which with their traditions, cultures and typicality, are the spearhead of a slow tourism, sought and absolutely surprising. Reaching these little jewels furrowing the seas of the Tyrrhenian coast of our boot represents an experie...
Continue
Recipe: Mirto, sips of well-being from the villages of Sardinia
"One enjoys one drinks as much as one's thirst". Thus wrote the great Italian poet Dante Alighieri (1265-1321) in the 20th canto of Purgatory of his universally known Divine Comedy. In the same period, "spirit" drinks began their unstoppable journey towards popularity. The elixir of Sardinia is the Mirto (myrtle), a liqueur with an alcohol content of 30-35 degrees obtained by cold hydroalcoholic infusion or dark purple berries or leaves: with the first one obtains the red myrtle, with the second the white myrtle is there. Both delicious w...
Continue
Mysterious Sardinia: the legends of Stintino, Bosa and Alghero
Photo by lanuovasardegna.it Sardinia is a very ancient region whose origins are lost in the mists of time, as evidenced by the presence of menhirs, dolmens and especially nuraghi from prehistoric times. In addition to its stunningly beautiful beaches, Sardinia also has a very important cultural heritage, which often leads to stories and legends that are still passed down today and make already spectacular places even more impressive. The tragic end o...
Continue
When Asinara Island was the Italian Alcatraz
Perhaps the biggest condemnation was to have the blue sea a few meters away but not to be able to see it for the rest of its days. Only the former bandit and fugitive Matteo Boe plunged back into the crystal clear waters of the Gulf of Asinara, escaping aboard a rubber boat with the help of his cell mate. Boe was the only one to escape from what until 1998 was considered the impregnable (except for him) Italian Alcatraz. Then the maximum security prison of the Asinara clo...
Continue
Today we celebrate World Water Day
Today, March 22, we celebrate World Water Day, established in 1993 by the General Assembly of the United Nations. This year the theme is Water for all - Leaving no one behind ("Water for all, let's not leave anyone behind"), which is inspired by the sixth of the 17 goals for the sustainable development of the 2030 Agenda, or "to guarantee everyone the availability and sustainable management of water and sanitation by 2030». «Water is a precious commodity and it...
Continue