Share
Furore is called "the country that is not there" because of its shape in the mountains. It is a village divided into two: on one side its marina, or the Fjord, on the other the country, with its houses scattered along the ridge, practically invisible to the eyes of those traveling along the Amalfi coast.

A look at Furore

From a suspended bridge between sea and sky, a ...
MIKY MERISI - e-borghi Community 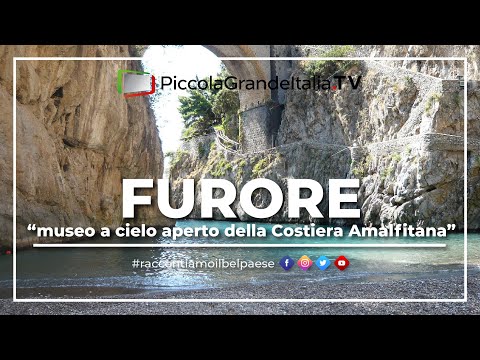 Furore is a small jewel perched on the Amalfi Coast, which has just under 800 inhabitants.

For the conformation of the village hidden in the mountains, the village of Furore is called "the country that does not exist".
From the rigid aspect of the rock and the fluid aspect of the sea, Furore is a village divided into two: on one side its marina, that is the Fjord, on the other the village, with its houses scattered along the ridge, practically invisible to the eyes of those traveling along the Amalfi coast.

The Fiordo is a split due to an almost always dry stream, the Schiato, which descends steeply from the edge of the Agerola plateau. It is also bypassed by the state road through a 30 m high suspension bridge, from which, every summer, a stage of the World Championship of Great Heights takes place.

Inside the fjord there are the Stenditoio and the Calcara, two buildings used for local productions. The drying rack was used to dry the sheets of paper extracted from the fabric fibers. La Calcara instead was used for processing stones for local construction.

Founded by the Romans, the village of Furore was, due to its particular physical-geographic conformation, a stronghold which could not be attacked even at the time of the Saracen raids. It emerged from the complete anonymity with the compilation of the carolino catastrophe of 1752 that restores the image of a small coastal community scattered on the territory, devoid of cultivable and scarcely inhabited land. Its inhabitants were dedicated to sheep-farming and crafts. Some of the most important families have given names to places and streets: Li Summonti. The Porcupines, Li Cuomi, Li Candidi. The Summonti moved to Naples in 1400. But they left Furore their impression of probe men, constituting a massive donation of ducats whose annual income had to marry a "poor and honest zitella" of Furore. The Furorese were also obliged to go to the Neapolitan mansion of the Summonti, in gratitude and respect, "three rolls of bones, living bones and fetters to receive". It was a farmhouse in the town of Amalfi. His name, probably, had to be derived from the fjord of his Navy, inside which there were opiates for paper production and wheat milling. These activities were fueled by the waters of the Schiatro stream that descended from the Lattari Mountains.

Village of Furore
Municipality of Furore

Strada Statale Amalfitana, 43, Maiori (Salerno)
9.94 Kilometers from Furore
Torre Vicereale
One of the tourist attractions of the Amalfi Coast is the Tower of Cetara.

Via Lannio, 2 - 84010 , Cetara (Salerno)
13.08 Kilometers from Furore
Torre Vicereale
One of the tourist attractions of the Amalfi Coast is the Tower of Cetara.

Recipe: Ferrazzuoli alla Nannarella
Is it possibile for an italian village to contain all the passion and wonder of a great love story? We are sure it is, especially when it comes from Furore. This beautiful village in Campania is well-known for the love story between Roberto Rissellini and Anna Magnani, in the mid-1940s. This incredible couple came here for the shooting of the movie "Amore"; they used to go to th...
Continue
Italian villages in movies, when cinema is set inside the villages – Episode 1
Italian villages are natural sceneries for arthouse masterpieces. From north to south, here are some location used for famous movies or by great directors, from Borghetto (Luchino Visconti) to Sabbioneta (Bernardo Bertoulucci), from Savoca (Francis F. Coppola) to Tremosine for a James Bond episode.
Continue